352a. Kenmore to Arrina woodlands

I’ve split today’s walk as I did this walk in two “sections” and this is the first one. On my previous walk I had ended at Kenmore so today it’s time to head back there to continue the walk. With no buses running on the entire Applecross peninsula I am relying on a combination of walking and using my folding bike today.

I set off from the hotel I’m staying at in Kyle of Lochalsh and drive back onto the Applecross peninsula. The roads are narrow and hilly and I decide to continue beyond Kenmore to find somewhere else suitable to park. A little over a mile up the road I reach the turning for the next village north, Arrina, which is on a short dead-end road. There is what I take to be a parking area immediately to the right of the road. I stop my car here and unload the folding bike, which I leave in the grass beside the road. Then I drive back to Kenmore and park where I ended the walk yesterday on a large gravel area beside the junction.

The most obvious route north now looks to be the road but careful study of the map suggests a path exists at the end of the road back to the “main” coastal road on the peninsula. That would be closer to the coast and also shorter, assuming that it actually exists.

So having set up the first mile of the walk, it’s time to get going along the dead-end road through Kenmore. The road descended through woodland passing a fish farm on the right and then opened up to pretty Kenmore. 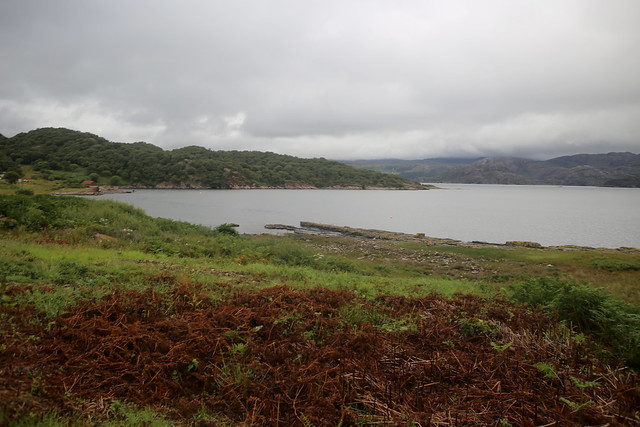 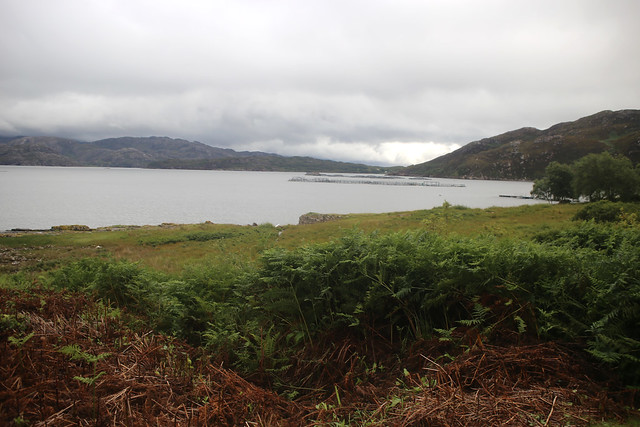 This is a hamlet overlooking Loch a Chracaich and has a lovely outlook. The road ends here, at the half-dozen or so houses. 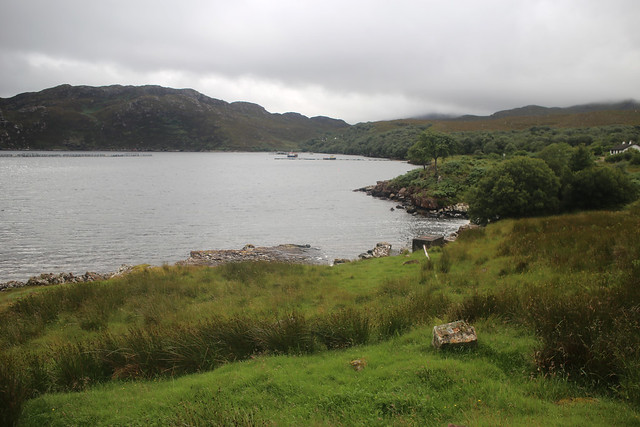 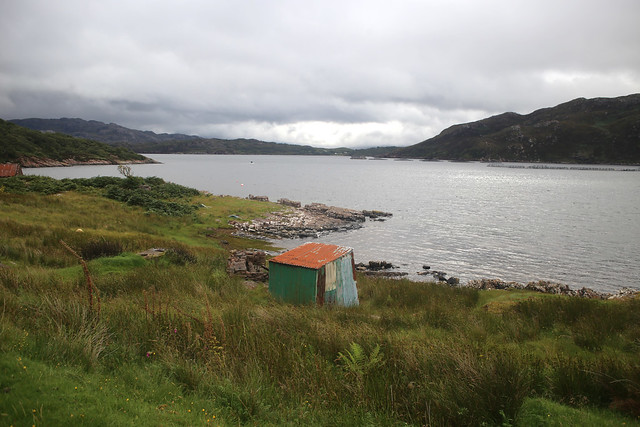 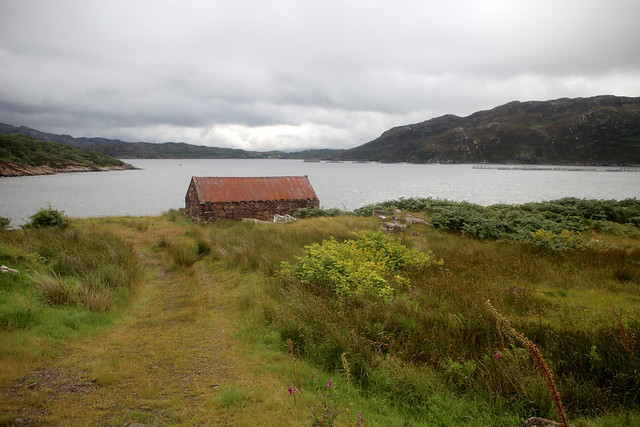 The only facilities are a telephone box. The Ordnance Survey map of the area also marks a post office here but it no longer is, it’s now a house called The Old Post Office. I suspect it stopped being a post office many years ago. Many of the Ordnance Survey maps of Scotland seem to be updated rarely (just re-printed with a different cover) but the one for Applecross seems particularly poor. Not only is this old post office still marked but the now only remaining post office on the entire peninsula is not even marked on the map. And I don’t mean just that the building isn’t marked as a post office but that the building isn’t even shown on the map at all!

Anyway enough about maps, I continued to the end of the road and followed what now becomes a track past the last house on the right. The track continues and narrows to a path. I’m heading back uphill towards the “main” road round the peninsula. Over the fence the path isn’t really obvious now but I can see the gate in the fence on the road ahead so I go to this and go through it to the road. There is a fine view back down to pretty Kenmore. 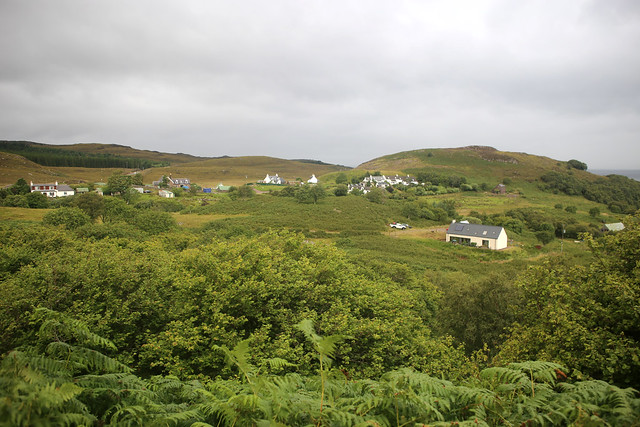 I turn right and follow the road up to the crest of the hill and I have fine views of the small island of Eilean Mor. 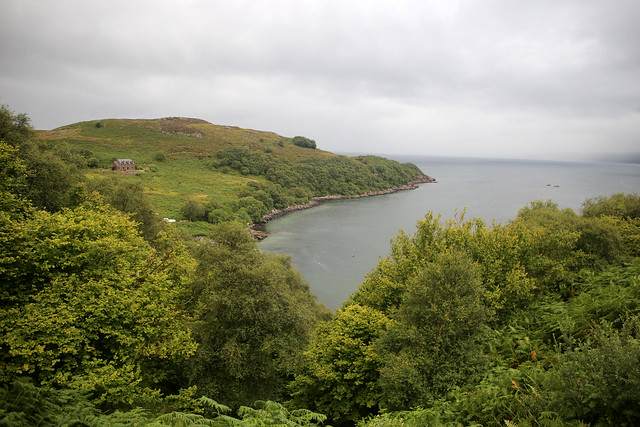 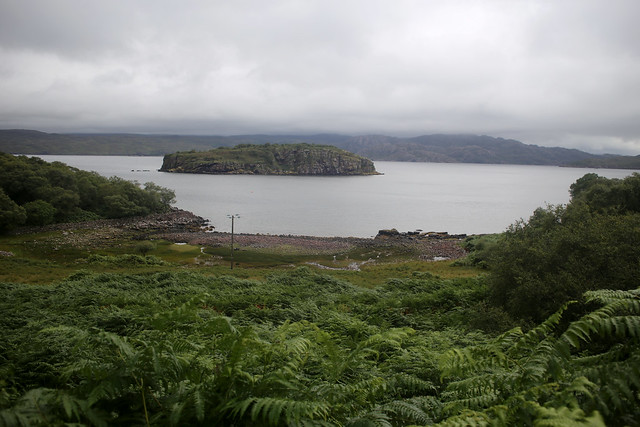 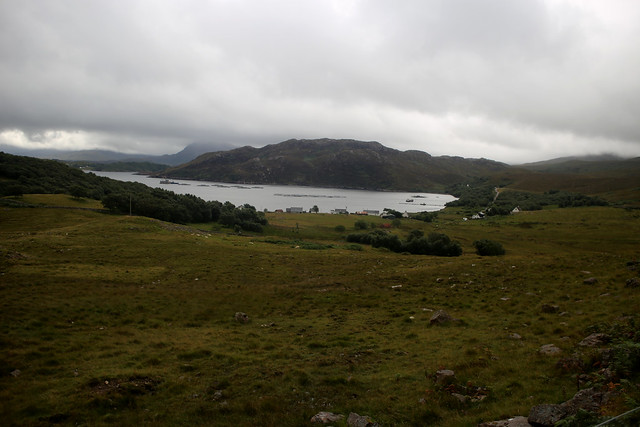 Rounding the corner the road turns a bit inland to reach the dead-end road for Arrina. I dropped my bicycle here beside the road earlier. So now I collect my bicycle and cycle back to Kenmore. Back at Kenmore I put the bike in the boot of my car (it’s a folding one) and drive back up to Arrina.

I pull up in a large gravel area beside the road, beside which I had left the bike earlier. I had originally done this thinking this was a good place to park to continue round the peninsula. There aren’t many places to park along this road, it’s a single track road and parking in a passing place is not a good idea (or legal). Now I’m a bit worried that it might be private parking area belonging to a nearby house. It isn’t particularly obvious either way. There is nothing to say it is private, but it is beside a house (that is on the other side of a fence) and with their bins here. I decide I’m not entirely happy to park here and instead I’ll leave the bike back where I put it before and continue to drive up the road to the next possible stopping place, perhaps at Fearnbeg. So I drive up the road but a short distance ahead is a woodland area where it is possible to park, called Arrina woodland. That will do for now.

I resume my walk by going back down the road to Arrina. 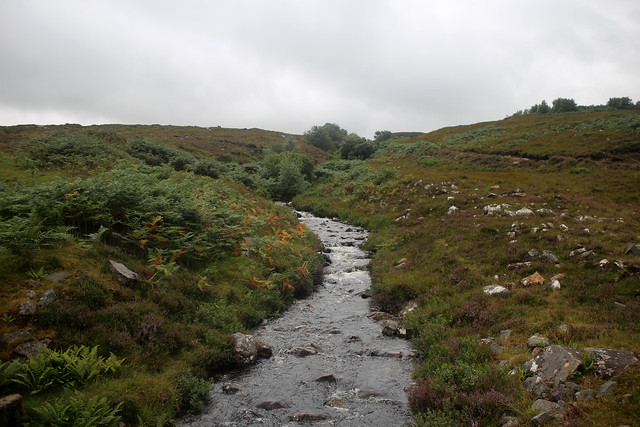 There is not a lot to report and it’s not far. 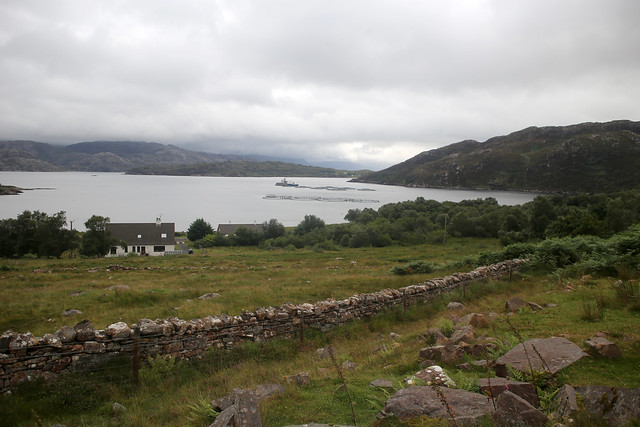 When I reach there I pick up my bike and cycle back to the car. I should really have gone a bit further before parking up, as I’m wasting a lot of time going back and forth.

Now I planned to leave the car here and cycle along to the next possible place to park (perhaps Fearnbeg), then walk back. However as I get back to the car I spot a signpost I missed earlier beside where I parked, pointing to a footpath that it says goes to Cuaig.

I check the map and see that Cuaig is on the west side of the peninsula so in theory this path goes along the “neck” of the peninsula, cutting out the coast. However the path itself is not marked on the map so I have no idea of the actual route it takes or whether it is in a usable condition. I only have the destination and mileage on the footpath post, but the mileage suggests it must be a fairly direct route. I don’t like cycling. With the time it would take to cycle to Cuaig, walk back along the coast and then drive back to collect the bike at the end I suspect that following this path to Cuaig and walking back along the road will take a similar amount of time and means I don’t have to cycle anywhere.

I therefore have a change of plan. I’ll follow this path back to the west coast and so make the next part a circular walk, by following this path inland to Cuaig, on the west side of the peninsula and then follow the coast road back later on. I’ll write that up separately as part two of this day since I’ll be doing it in the opposite direction.

Here are details of the public transport for this walk:-