After a couple of years where I did very little walking on the South West Coast Path I have come to Minehead to spend 3 days walking from Minhead to Combe Martin (as I had walked the coast from Combe Martin west several years previously). This is the first day and I drive from home to Minehead. This proves quite straightforward as far as Taunton, but getting through Taunton takes a while and the road from Taunton to Minehead is slow, passing through many villages on the way. Despite this I reach the sea front at Minehead in about the time I had estimated so overall the journey is not too bad, especially considering it is the school holidays in summer. I park up on the sea front in Minehead, a place I have only been to once before and can remember little about it.

The beach is better than I remember, being mostly sand and the view looking west is particularly nice with the high cliffs of Exmoor beyond. The view to the east over the beach is good too, although the Butlins holiday camp in the distance is a bit of a blot on the landscape. 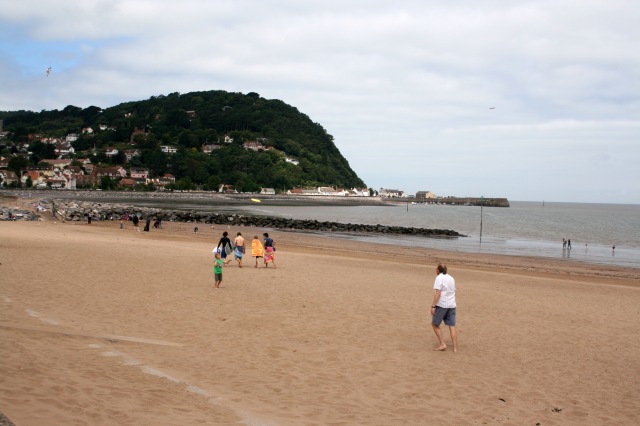 The beach at Minehead

I turn left and keep the sea on my right heading along the pleasant and wide promenade. I soon pass the West Somerset steam railway on my left, the longest steam railway in the UK. It is a great little railway and well worth a ride, although it is a shame they don’t run trains through to Taunton, as then I could have travelled all the way by train instead.

Soon I reach the marker that marks the beginning of the South West Coast Path at Minehead, a lovely piece of artwork depicting a hand holding a map. This marks, or at least is meant to, the start of the South West Coast Path. It is clear therefore that the navigation for the next 650 miles or so will be much easier, although looking at the hills ahead it is also clear that the terrain won’t be.

Easy to find the route here!

I continue around the promenade to the harbour, which is a pretty little spot and gives good views back around the bay and to Dunster and Blue Anchor beyond.

View round the coast from Minehead

I continue past the harbour to the shingle beach beyond, backed by a few houses which look rather exposed, with just a little shingle wall to protect them. At the time I walked this part of the coast the route of the coast path was a little confused with two routes out of Minehead signed. The first is up steps behind the monument, the second a lower path along the back of the beach. I opt for the higher route (which I notice is no longer signed as the official route).

There is a steep climb up to woodland, where a sign welcomes me to Exmoor. The path here is wooded with limited views of the coast, and it is clear I have gained quite a bit of height.

Soon I emerge from the woodland onto the open moorland to the west, a lovely mixture of heather and gorse with views out to sea. The clouds are casting interesting shadows over the sea too. Below I can see the shingle at Greenaleigh Point now far below. 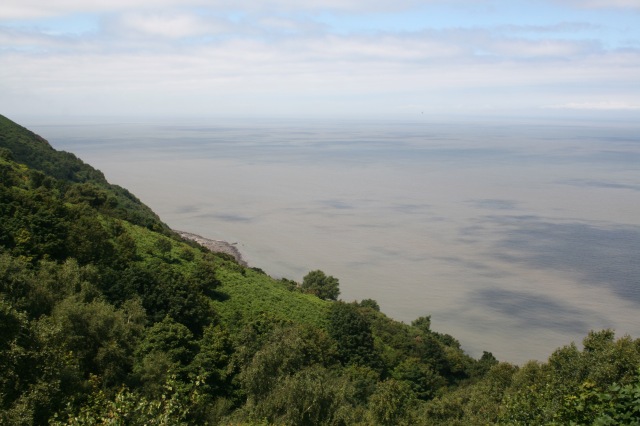 Ahead the path becomes steeper. Although the coastal path, the path west of here is around ¼ of a mile inland probably because the coastal slope is so steep, which does limit views of the coast itself a bit. I reach North Hill which is the high point of this part of the path.

Heather and Gorse on North Hill

Here again now there is a new permissive footpath which runs much closer to the coast, but does turn in and out a lot around the various valleys. At the time I did this walk this route was not available, so I continue on the now alternative higher path which goes close to Selworthy Beacon. The views are wonderful, but the only disappointment is that I’m actually over half a mile from the sea, thankfully something that has been rectified by the new route.

Heading west from Selworthy Beacon I’m soon treated to a wonderful view over Porlock Bay and the village itself, although it is quite misty so I can’t see as far as I’d like.

The gorse and heather of the moorland make this an attractive walk, with the yellow and purple flowers lining the path here. The path now begins to drop down to Porlock Bay along the valley of Hurlstone Combe. As I descend, the views improve as the mist has lifted and I can see right around Porlock Bay, to my destination, Porlock Weir. 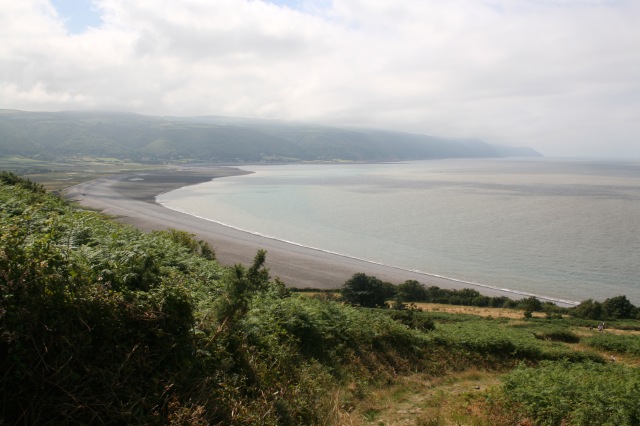 The wide path soon heads into woodland and crosses the fast-flowing stream of Horner Water at North Bridge. I emerge back into the sunlight into the small and pretty village of Bossington, with several thatched cottages. It is very peaceful here and is I imagine a lovely place to live.

I turn right onto the road through the village and follow this to the shoreline. It is worth noting here that the shingle bank at Porlock was breached some years ago. Unusually the decision was taken not to repair it. This means the sea is now flooding over the flat land behind that leads up to the village of Porlock. The route I followed (which was after the breach) is now no longer passable, and the coast path has been diverted a little further inland as a result, so the best advice I can give is to follow the map! On reaching the shoreline I have a lovely view over this shingle beach with some ruined stone buildings at the back of the beach. 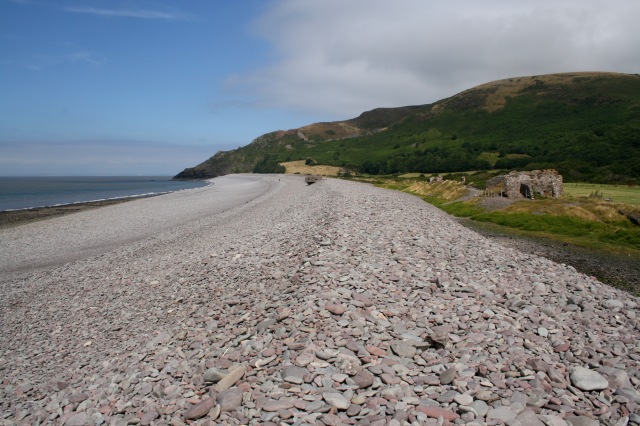 The beach at Porlock 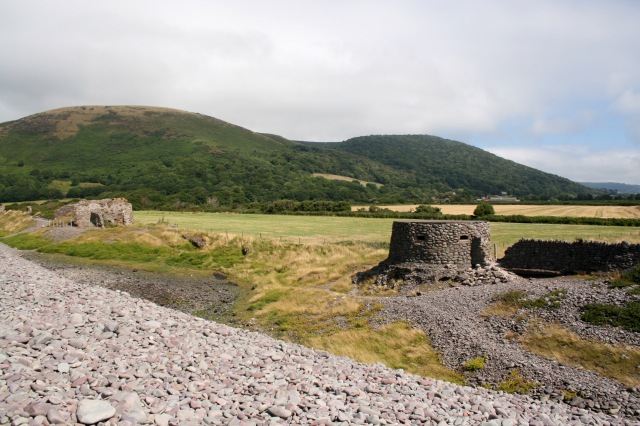 I crunch my way along the shingle bank for a while until I reach the signed diversion. This takes me around the back of several fields and joins the route that is now the marked route on the map. There are numerous dead trees along the field edges, a victim of the salt water that now floods in over this land on high tides. 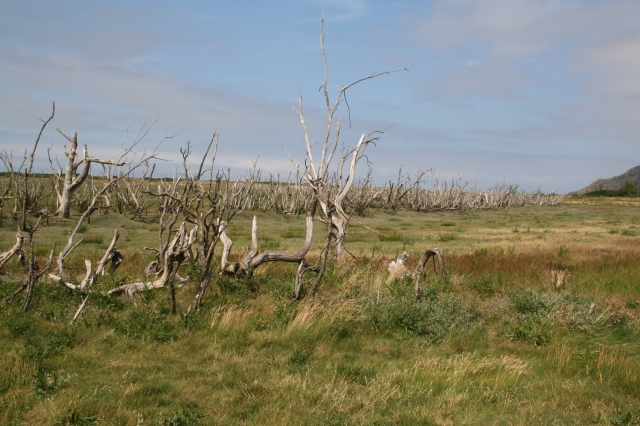 Dead trees near Porlock, a victim of the salt water flooding in.

I am in two minds about this approach. Whilst I generally like to see nature left to take it’s course, the land between the coast and Porlock is low lying and can’t help wonder if this decision might turn out to be a little short-sighted if it begins to threaten Porlock and new defences have to be built. The path soon turns to the right to head back to the coast around the breach in the shingle beach.

The beach at Porlock

I am now approaching the pretty village of Porlock Weir, my destination for the day. It is a small village with pretty stone cottages, many with thatched roofs and protected to some degree by the high wooded hills behind it. Soon I reach the harbour, which I suspect was once an imporant harbour but now has just a few boats, although there is also an inner harbour, accessed by a lock gate. Porlock Weir is beautiful and I enjoy the views back around the bay to Selworthy Beacon, Minehead now being well out of sight behind the hills of Exmoor. 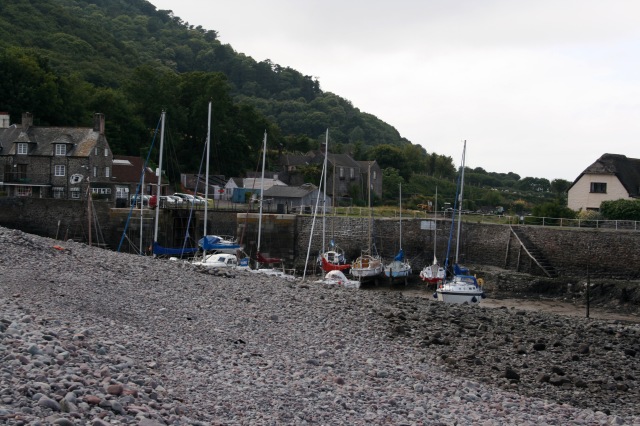 The harbour at Porlock Weir

The harbour at Porlock Weir

View back to Bossington Hill

I have very much enjoyed my first walk along the Exmoor coast. The change of scenery from previous walks is marked, as we are now in National Park with high hills along the coast and fewer towns and villages along the coast, and those that exist feel rather more remote.

Although Porlock Weir is a small place it does get a bus service (albeit it not especially frequent) and better still a direct route back to Minehead. I am aiming for the last bus, which I make with time to spare. I relax on a seat overlooking the coast and fine views around this lovely bay, in the warm summer sunshine. Soon I hear a bus arrive and can see it’s roof above the stone wall to the left. I head down to get on the bus, pay the fare and get on board. The bus is old and I notice a large Leyland logo on the drivers door as I get on, which reminds me a little of the buses I first used to use when at school, long since withdrawn in my home town. We soon get underway with just a few passengers, making our way along the B3225 into Porlock where I’m staying, but I must continue through to Minehead on the bus to get my car, which is in Minehead.

The bus then heads through Porlock and onto the A39 to Minehead, a road a little inland which avoids the worst of the hills. The bus makes quite quick progress and I’m back in Minehead in a little over 20 minutes. I find my car and then return the way I have just come, along the A39, to Porlock where I’m spending two nights.

It has been a good first day and I’m pleased that despite the hills I don’t feel too tired. I head to one of the pubs in Porlock for a meal and work out my plan for tomorrow.

The public transport needed for this walk is detailed below.

Here are the photos I took on this walk