On a previous day I had walked from Arisaig to Lochailort. For much of that walk I stuck to the A830 road which runs along the coast. However there is a small peninsula, Ardnish, which the road does not go round and so I bypassed it on that walk, as I stuck to the road. This was largely due to my need to get to Lochailort station before the last train back to Arisaig.

Today I’m going to explore Ardnish, to fill in the gap I left on that previous walk. A path runs from the A830 across the peninsula to the shore at a place called Peanmeanach, where there used to be a bothy (it’s now private). This will therefore be a there and back walk along this path as there was no other paths from the beach and the terrain looked too tough to try and find my own route.

I am staying in Mallaig so it’s a short drive down the A830 and there is a handy layby you can park right where the path begins.

When I park here there is no one else parked there. The sign for the start of the path is clear, even if the distance isn’t. Part of it seems to have been rubbed off the sign (leaving just the 1/2 mile at the end). Underneath has been scratched 3 1/2m (and to the left of that “Fuck That”, presumably by someone not too keen on walking!). I suspect the sign originally said 2 1/2 miles and has been “amended” to be 3 1/2 miles, which looking at the map seems more accurate. 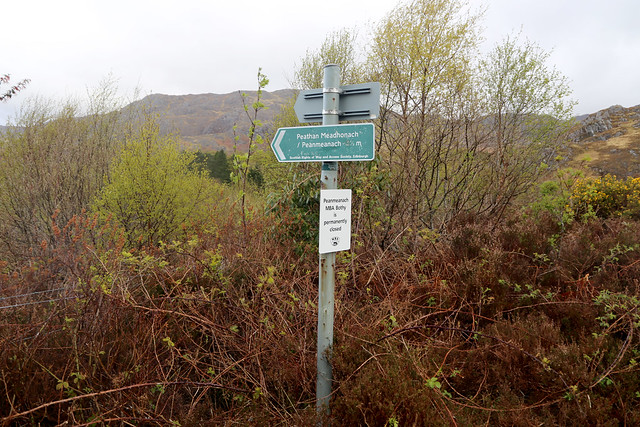 Sadly another sign warns that the bothy at Peanmeanach is permanently closed. It actually does still exist but has been refurbished into essentially basic self-catering accommodation that needs to be pre-booked and paid for, so not really a bothy anymore. I believe this was at least in part as a result of users of the bothy cutting branches off trees to use (or I suspect attempt to use) as firewood. A shame, but I’m not planning an overnight stay so it doesn’t cause me any problem.

There is a clear, but slightly overgrown path that leads me away from the road and passes Loch Dubh, which is squeezed in between the road and the railway line. It is quite a sizeable loch, but looks pretty shallow, as I can see the stones at the bottom. 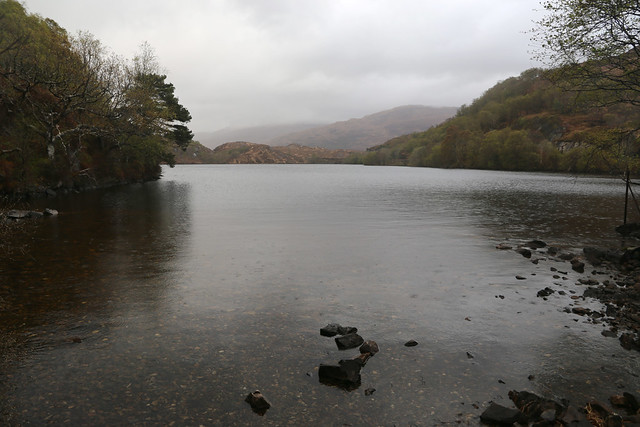 Beyond the loch is a concrete bridge over the railway line. It looks a bit like a small road bridge but it’s a narrow path (with trees either side) on both sides of the bridge. I am amused to note it therefore has a notice about not using vehicles above a certain weight on the bridge. I can’t see how it would even be possible to get a vehicle here (except perhaps by helicopter) let alone one heavy enough to exceed the weight limit on the bridge! 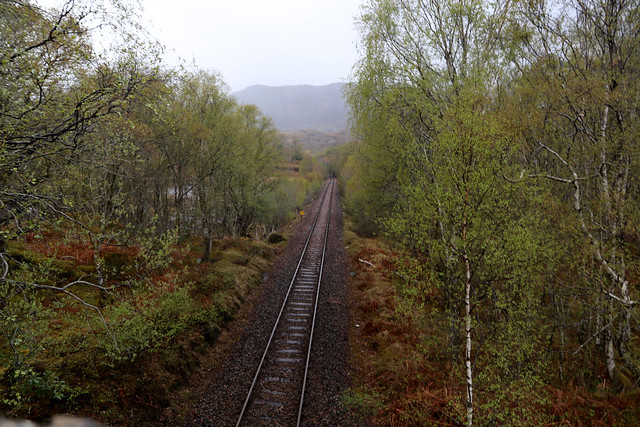 Beyond the railway line the woodland opens out to moorland where a clear (but wet) path reveals itself. Well at least the way is clear. I soon come to a part where the path begins to climb into light woodland and the rain continues, giving a lovely rainbow. 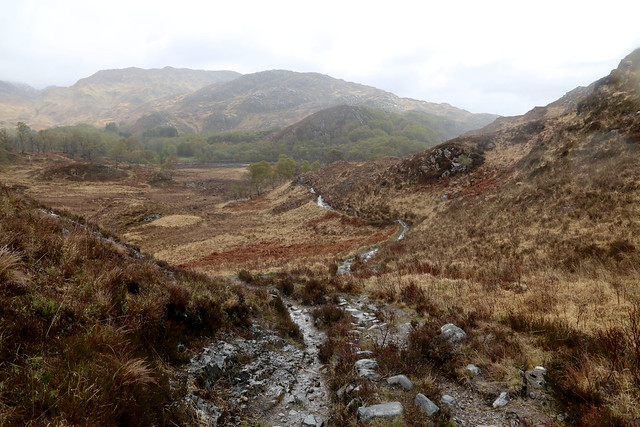 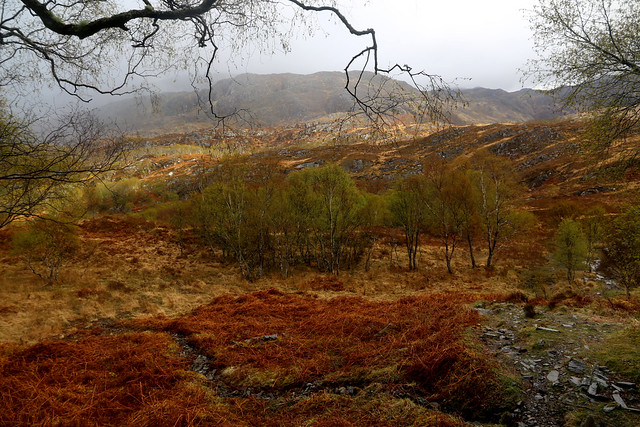 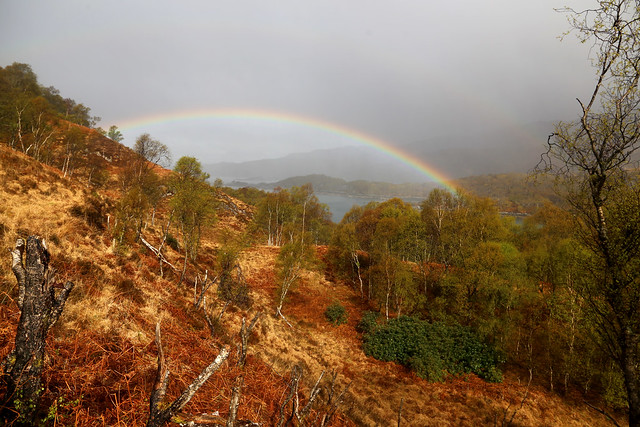 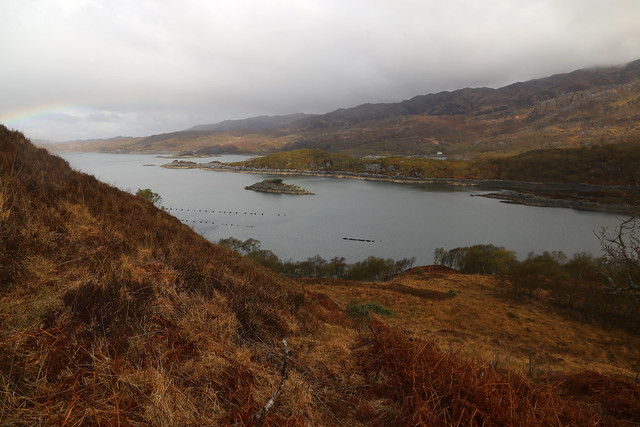 That continues until it goes on a very steep camber and then the ground ahead is very steep. I stop here, this can’t be right, surely?

I have to stop at get my GPS out. When it finally gets a signal it confirms my suspicion. I’ve somehow gone wrong. What I’m on isn’t the official path, perhaps a sheep path or perhaps a path where other walkers have done exactly what I’ve just done! Initially I try to get back on track by getting up the slope but it’s too steep and I’m going to fall if I try it. So I have to backtrack a bit to where it’s less steep and then follow the co-ordinates on the GPS until I’m back where the path should be and indeed is. Not sure how or where I managed to go wrong, but I’m glad to be back on track now.

The path now soon begins to descend, latterly more steeply with the beach ahead, then goes through some thick grass to reach the shore. I’ve made it at last! 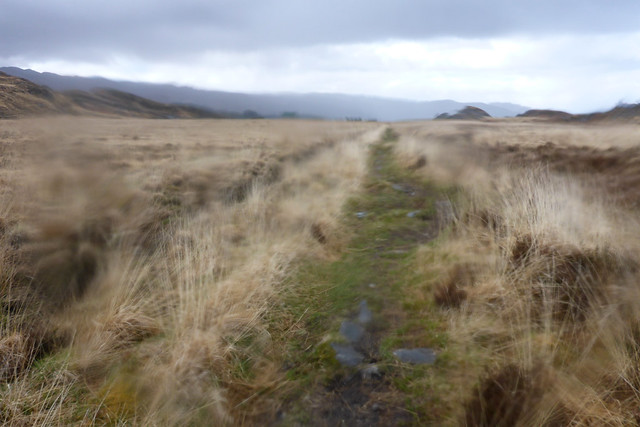 There is a ruined building here, as well as the bothy. 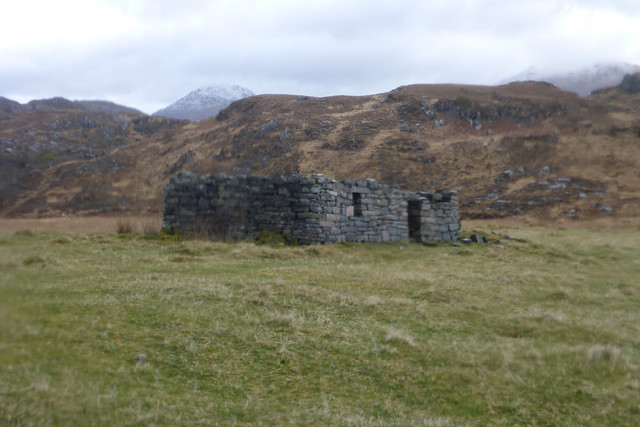 The beach is, as I’d hoped, lovely a sandy beach with stunning views and a nice flat area of grass behind. 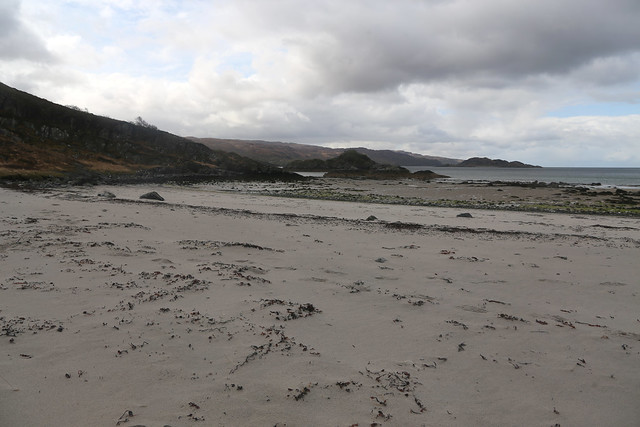 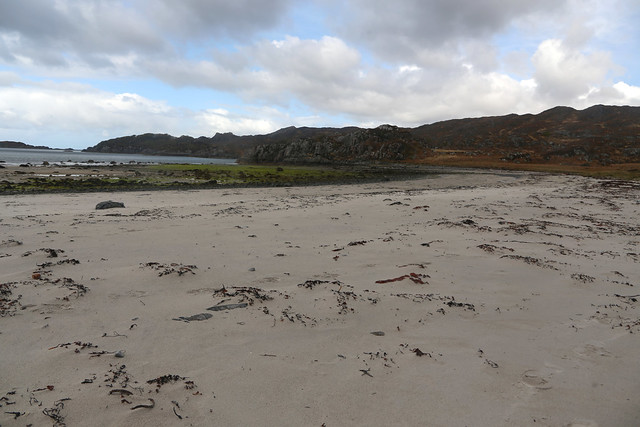 I found some wood pressed up at the back of the beach by this grass, which I can sit on for an early lunch to keep dry, as the ground is wet from all the earlier rain. 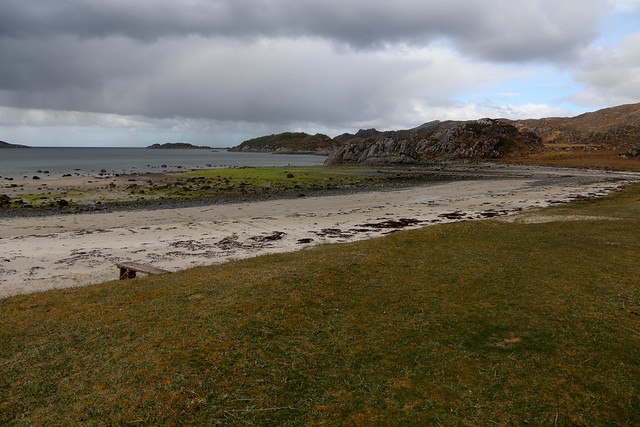 Behind I can see the now former bothy. 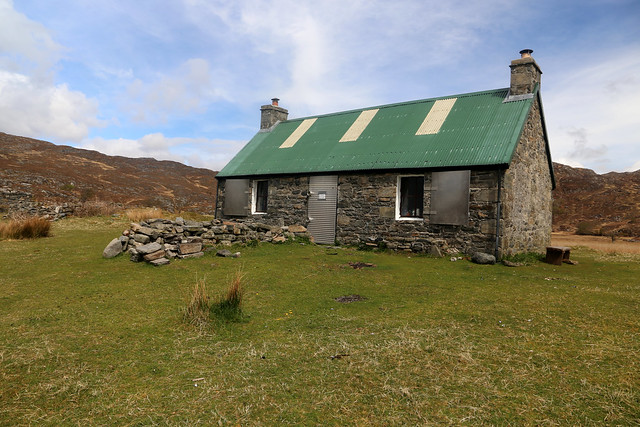 It has a very solid metal door and a notice not to attempt to enter, that it’s now closed as a public bothy and hopes to re-open later as a private bothy, after some refurbishment. A real shame and I do wonder how many would be prepared to pay to stay here in such a remote location with basic facilities like this (there is no electricity or water). There are also large metal shutters that can go over the windows but they are open today so I wonder if work is going to take place today. 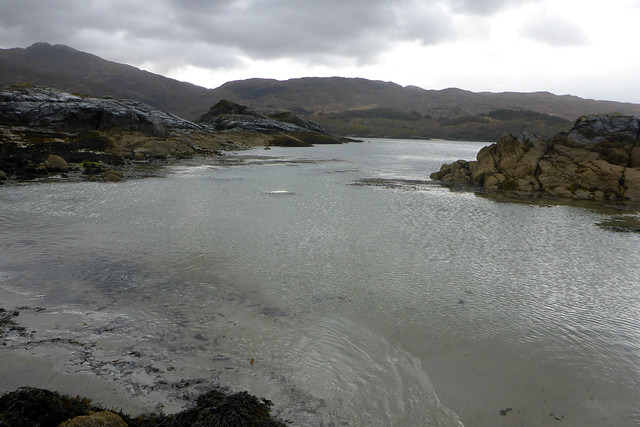 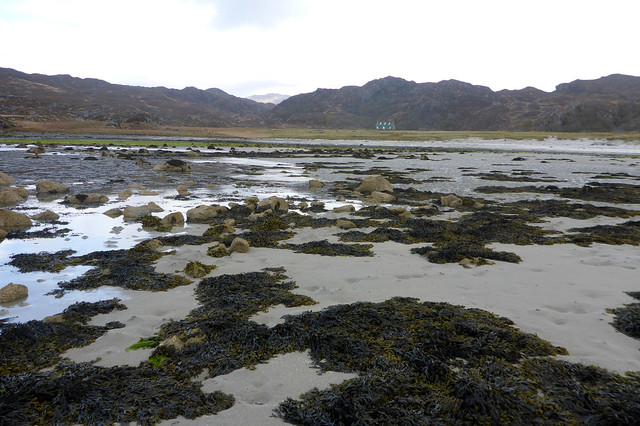 After a relaxing break on the beach, it is time to head back. 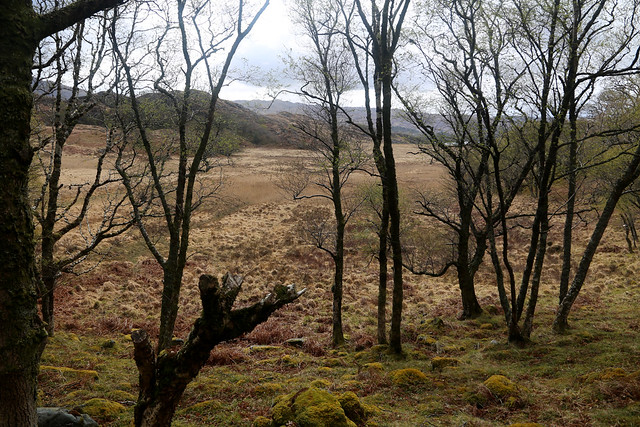 I go back the same way but hope this time I can manage to keep on the correct path. I do and this time do spot the point I went wrong. Briefly the path splits and the one I took is slightly more obvious, for about 1 metre and then the correct route is more obvious again. I guess I didn’t notice this second (correct) path at the junction perhaps assuming because the map showed only one path, there would be only one path and no need to follow the map too closely! Well I was wrong about that. 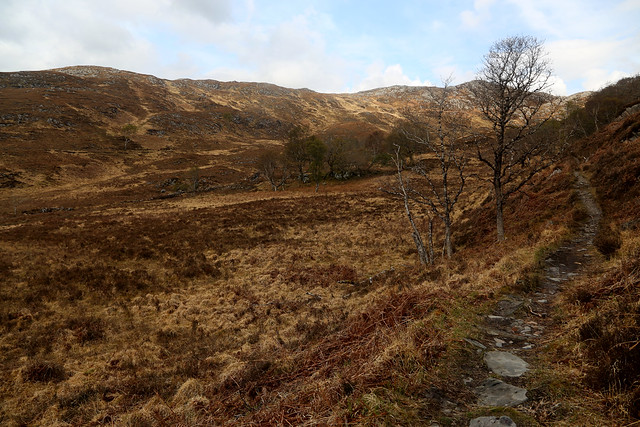 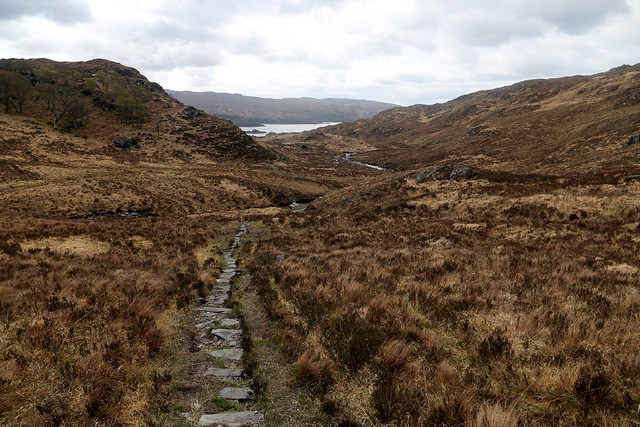 Fortunately on the way back the weather is much improved. The rain has stopped, the cloud lifted and as I get nearer the road and railway (and higher) it starts to get sunny. 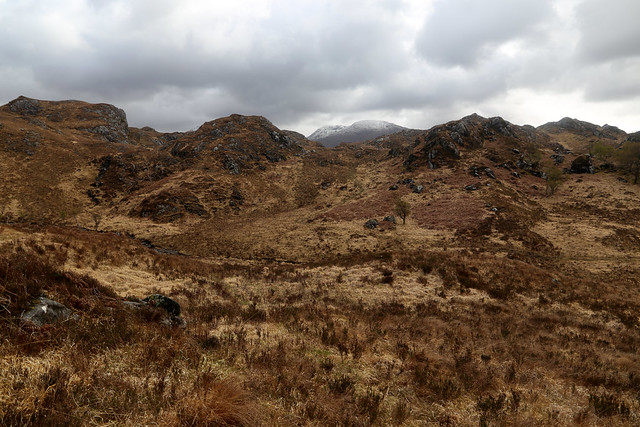 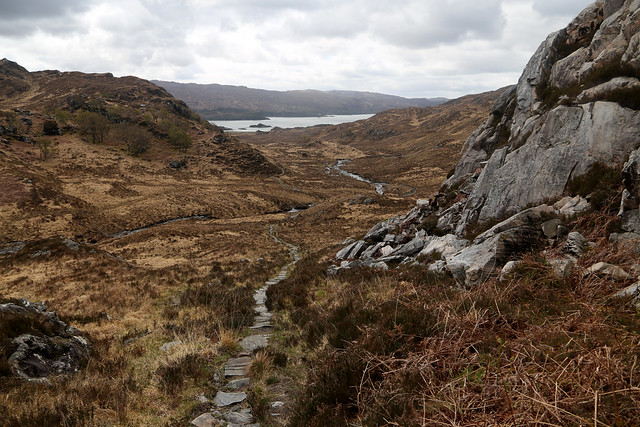 The views are quite stunning especially around Loch Doire a’ Ghearrain, where I can see the loch and the snow covered mountains beyond. I was surprised to see as much snow around, given it’s May now, but I guess it must have been a cold winter in this part of Scotland. 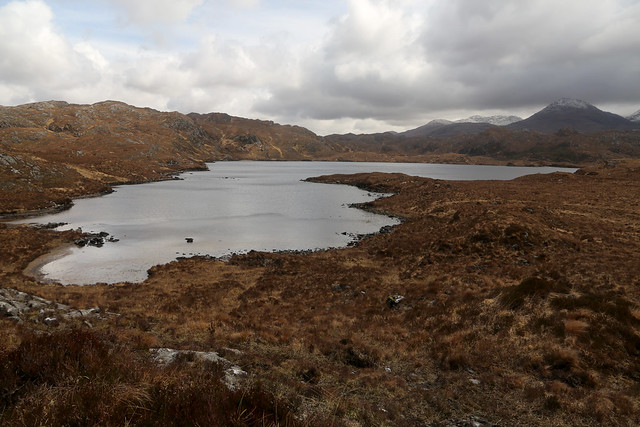 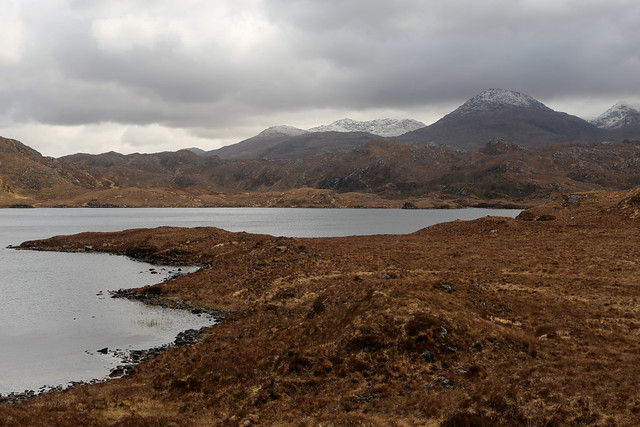 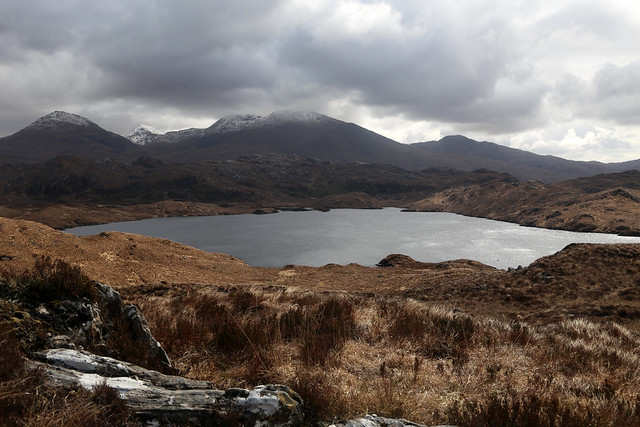 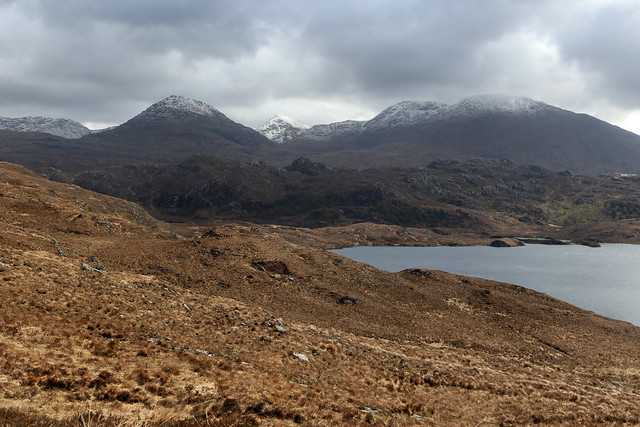 Once past the loch the path heads further north, close to the coast of Loch Beag and I get lovely views of this loch, the cloud now burning off to give clearer blue sky. It is turning into a lovely day. 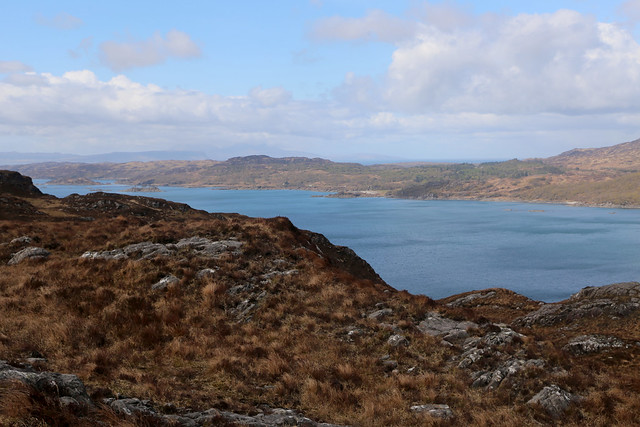 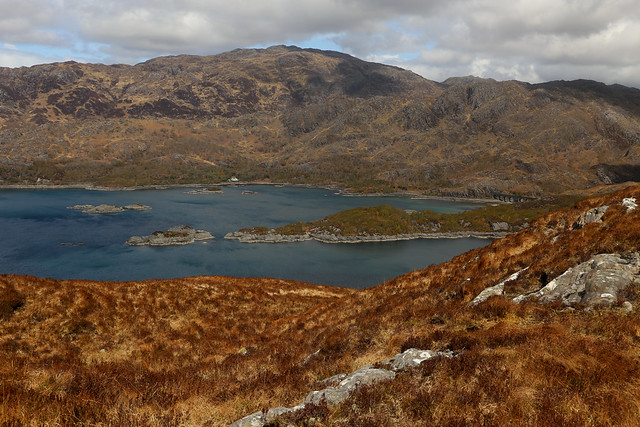 The views are stunning and I stop a few times just to look at the view and watch the ever changing scene, as the cloud moves across, lighting up some parts of the loch and not others. 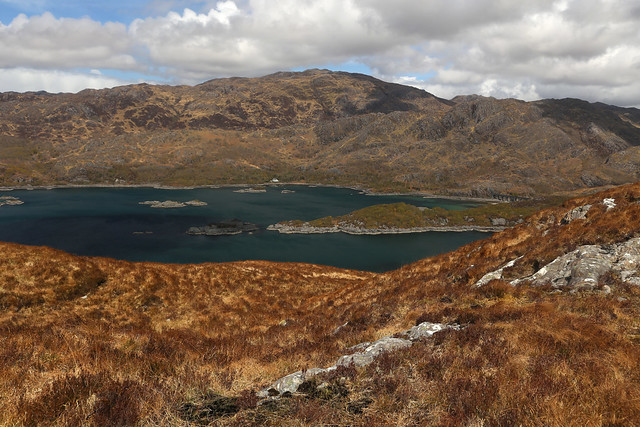 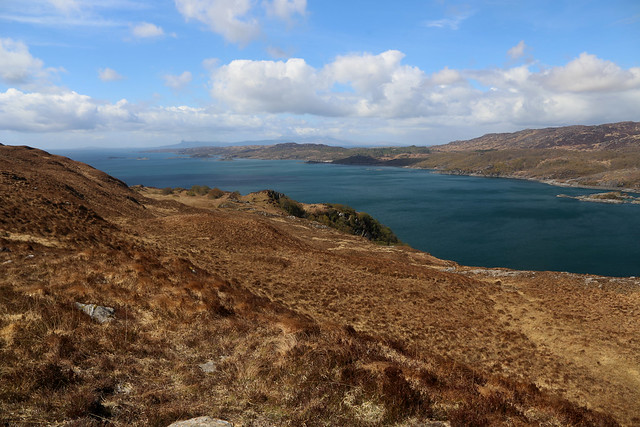 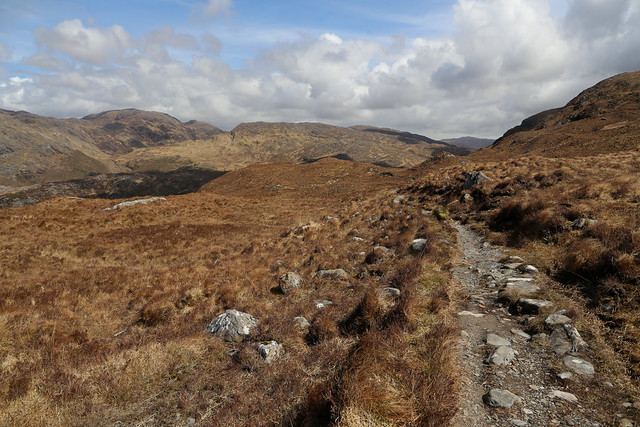 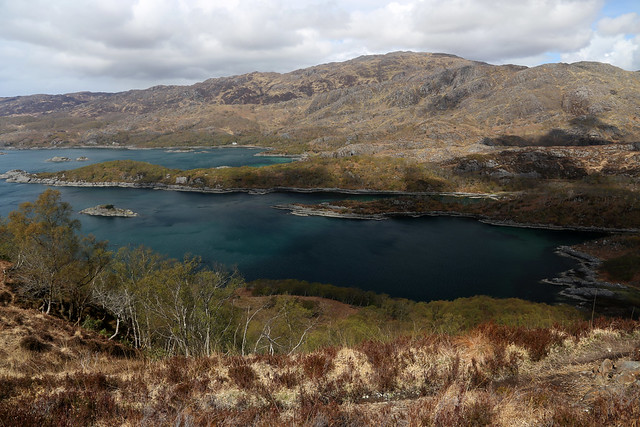 As I’m nearing the road I pass some other walkers, the first I’ve seen all day. To my embarrassment they recognise me, but I don’t recognise them. It turns out we passed each other on another walk earlier in the week (but one I’ve not yet written up) further south along the coast and they recognise me from that. I can at least give them a bit of guidance on the way ahead (don’t take the path I did!) and hope they have a lovely walk.

I soon reach the crossing of the railway and a short distance further on I emerge at the road. Now several cars are parked in the lay-by probably those of the group of walkers I just passed.

I’m very glad I opted to take this walk. Despite getting lost (largely my own fault) this was a lovely path over stunning scenery and it packed in a huge variety in a short distance, with coast, mountains, woodland and loch-side walking. The beach at the end was as nice as I hoped. It was just a shame the bothy is not really open as a bothy any more, though I was only likely to use it to shelter briefly if there was heavy rain (or perhaps have lunch in) anyway, so it wasn’t a big problem.

Shiel Buses routes 505, 500 and 534 : Mallaig – Morar – Back of Keppoch – Arisaig – Lochailort – Glenfinnan – Drumsallie – Fassfern – Fort William. 4 buses per day Monday – Friday and one per day on Saturday. No service on Sunday. The buses will stop at the layby for the path to Peanmeanach if you ask.

This entry was posted in Inverness and tagged Ardnish, Coast, Peanmeanach, Scotland. Bookmark the permalink.