This was my last day and I had to drive 550 miles home, so really I should be getting on with going home. But I didn’t want to go home, I enjoy my trips to walk the coast of Scotland hugely and wasn’t quite ready to declare this trip finished.

When I walked the section of coast between Arisaig and Lochailort earlier on this trip I’d missed a couple of dead-end roads and paths I could have followed, due to wanting to get to Lochailort before the last train. Before I went home today I wanted to fill the shortest of those gaps by following the dead-end road off the A830 to Druimindarroch (from near Borrodale). This looked to take me down to a shingle beach so I knew it wasn’t just going to be a road walk.

I checked out of my hotel in Mallaig and drove the short distance down to Druimindarroch. I parked at the top of the road just by the A830 junction as the road was wide enough here (it soon narrows to single track). Actually there are 3 roads here, one becomes a private road to Arisaig House and the other heads west to the coast just south of Arisaig and becomes a track (which I had already followed).

I continued on the public road which passed a terrace of cottages and then narrowed to a single track road through woodland. The road descends through woodland and soon emerges giving me a wonderful view over Loch Nan Umah and the various little headlands and islets. 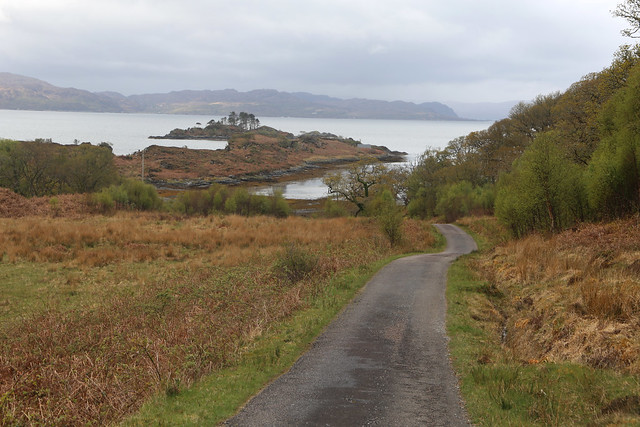 The road took me down to the coast at Saideal Druim an Daraich. I was soon alongside the beach but it is mostly shingle, rocks and sea weed. 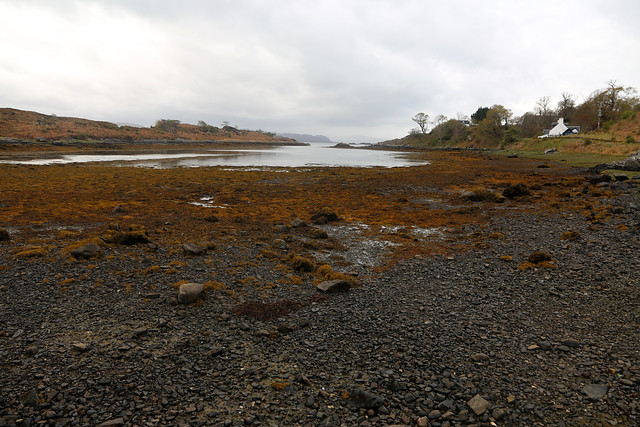 The road ahead continued to what I think is the only house beyond this point so I crossed the beach at the back. This turned out to be a bit muddy but I made it across without sinking into it. 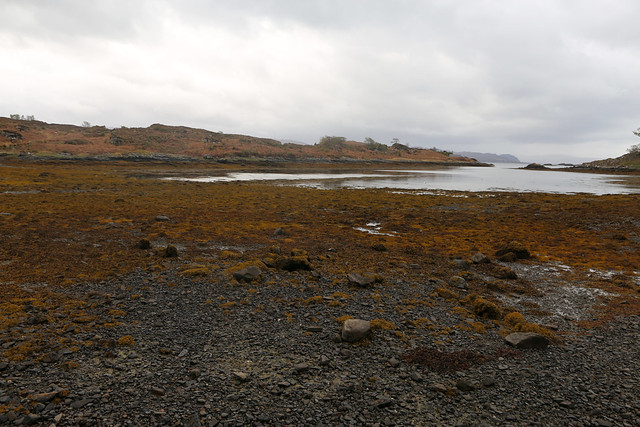 Now the sensible thing to do would be to turn back now and go home, but I wasn’t quite done yet. On the other side of the beach I was pleased to find a track and began to follow it, expecting to find a left turn, as the map showed a path. But I realised I was heading to a dead-end of a boat house at the end of a narrow spit of land. 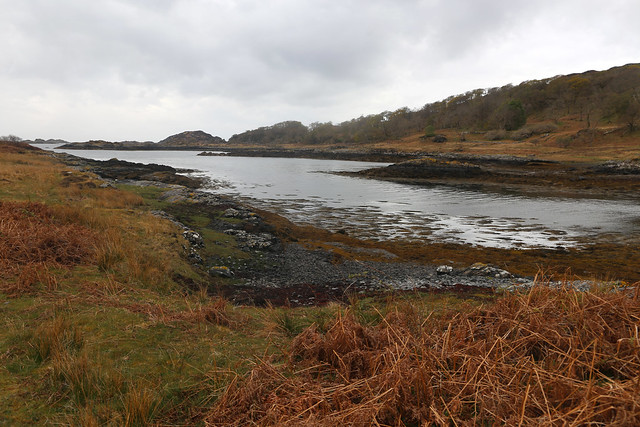 Re-tracing my steps I made my own way of the bracken and heather into the next little bay. Here I could see a jetty and checking the map it has the text “jetty” but doesn’t show the actual jetty! I wondered what it had been used for. I made my way down to and across this beach and then followed the track inland from the jetty. 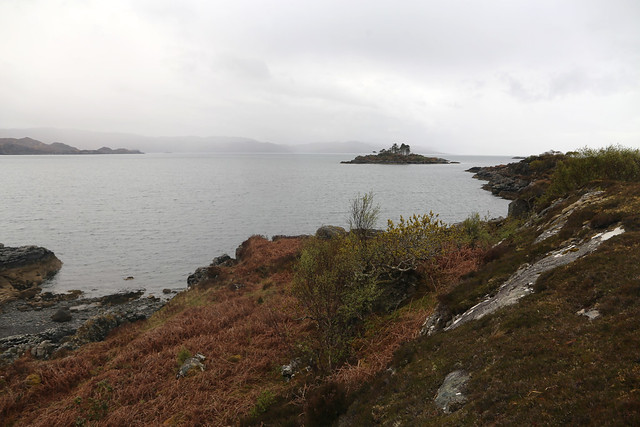 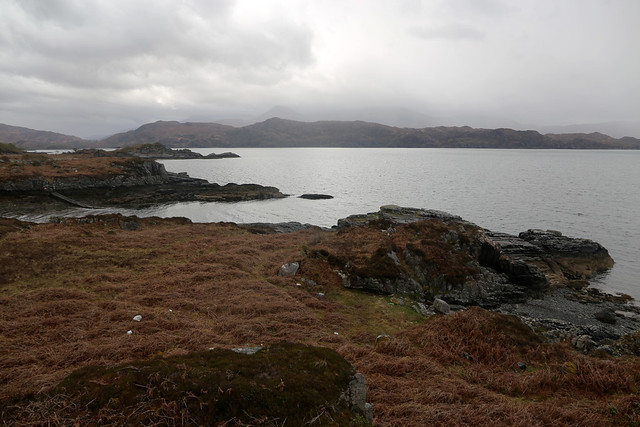 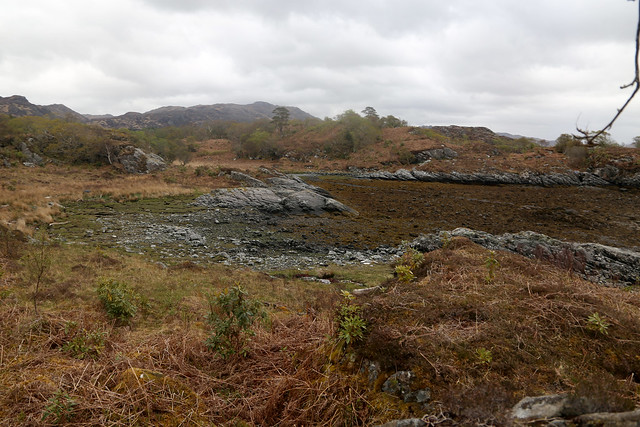 Again the map showed here another path would soon appear on my right to take me down to the next beach. There was again no sign of the path despite back tracking so I made my own way again over the bracken, rocks and heather to end up above the next beach. 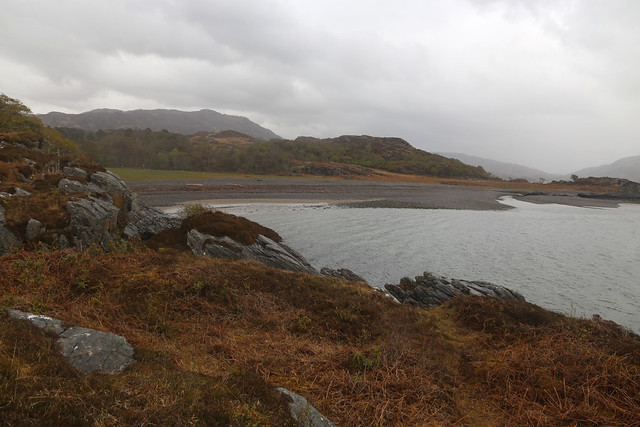 This was actually a sizeable beach and even had a little sand at the shore. Being above the beach it was tricky to get down to with a bit of rock climbing to get down but I soon made it down onto the sand and pebble beach. 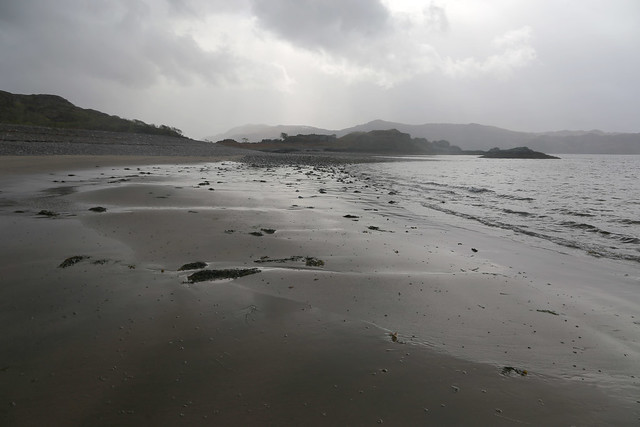 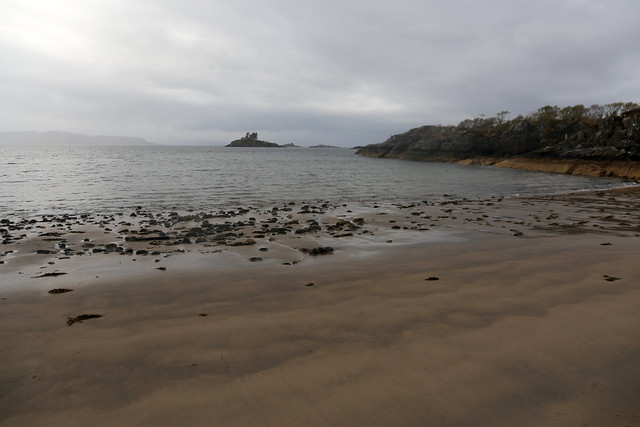 I followed the beach to the line of trees inland where the map shows a track beside the Borrodale Burn. Rather than head back the way I came I hoped to follow this back up to a track by Borrodale House and back to the road to make a short circular walk.

I headed up the grass at the back of the beach to a gate in the fence. I could see this had a notice on it so was pleased to see when I got closer it was an instruction to keep dogs on a lead and not “Private” or similar. I was pleased as despite the right to roam in Scotland it doesn’t stop some landowners making things difficult or discouraging it.

I soon found a car wide track along the side of fields with the stream out of site the other side of the trees. I could soon see the impressive Arisaig House on some cliffs above these fields. It is impressive and I later wondered what it is used for. 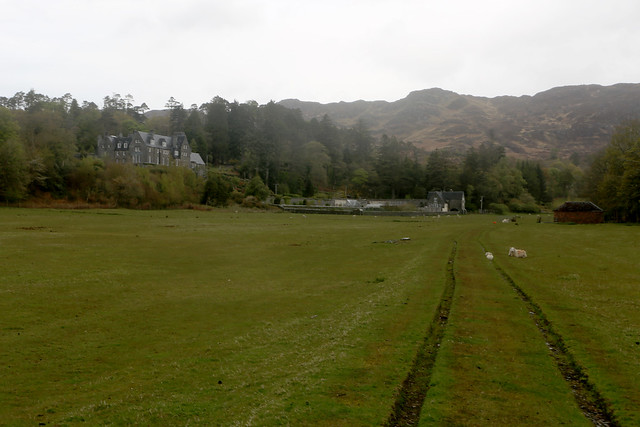 A quick Google suggests it is (or was?) being used as a hotel / bed and breakfast but is now on the market for offers over 2 ¼ million! Mind you according to the “blurb” the sale does also include 5 further “estate cottages” giving a total of 38 bedrooms. I suppose in that context the price is rather more reasonable (though still somewhat beyond my price range!).

The meadows here were full of sheep and as I was heading north I saw a vehicle at the gate. This always makes me jumpy in case I’m about to get the landowner asking what I’m doing here (or trying to claim it’s a garden for the house, despite being full of sheep). They enter the field but fortunately drive diagonally away from me and ignore me, so that was good. At the end I go through the gate and pick up the drive from Arisaig House to pass Borrodale House. Another impressive though smaller house this one is apparently a holiday let now!

At the end of the drive I’m back on the public road and follow this back the short distance to the A830. Here I turn left and follow the A830 back to the junction and my car. Fortunately, the A830 has a combined pavement and cycle path so I don’t need to traffic dodge. Then it was time for the long drive home.

My journey home didn’t go too badly other than getting stuck in traffic on the M6 (not unusual) so I opted to pay the premium to use the M6 toll road. This was clear however I then just got stuck in traffic to get onto the M42 so I’m not sure it saved me any time. However this was my first trip of the year and I knew I’d be back soon.

Here are details of the public transport needed for this walk. There are no buses to Druimindarroch but buses do run along the A830 and will stop at the junction for Druimindarroch.

Shiel Buses routes 505, 500 and 534 : Mallaig – Morar – Back of Keppoch – Arisaig – Lochailort – Glenfinnan – Drumsallie – Fassfern – Fort William. 4 buses per day Monday – Friday and one per day on Saturday. No service on Sunday.