Before I head south from Mallaig there is another short stretch of coast I had missed. Heading east from Mallaig towards Knoydart is a minor road that ends at a tiny place called Mallaigmore and for this walk I’ll be doing a there and back walk along this road.

I had somehow managed to hurt my ankle on the previous days walk in Knoydart though I wasn’t really aware how, it had just started to ache and got progressively worse during the day. Today I was going home and it’s a long drive home from Mallaig (over 550 miles) so really the sensible thing would have been to rest my ankle and go home. But I’m not sensible. It was a beautiful clear sunny day, absolutely stunning. I was not looking forward to going home and I did not want to leave Mallaig.

I decided therefore to do a short walk and fairly undemanding walk before heading home and this fitted the bill perfectly. I checked out of the hotel I was staying in, the West Highland Hotel and decided it was probably a good idea to move my car from the hotel car park to the public car park (I suspect they wouldn’t have minded but still…), and fortunately the car park in Mallaig was free (though probably not for much longer as there were new parking meters installed, but still covered over).

Even the car park offers a beautiful view. 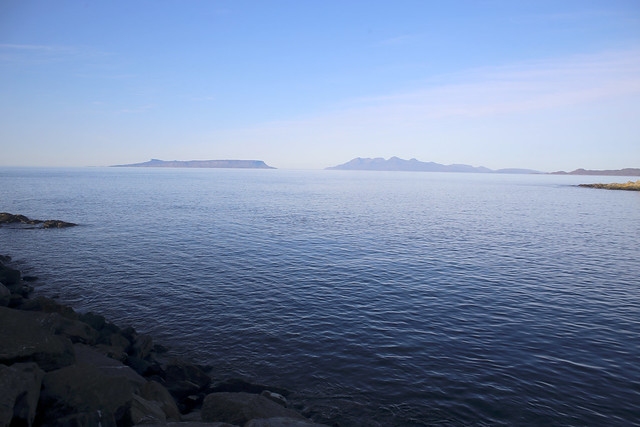 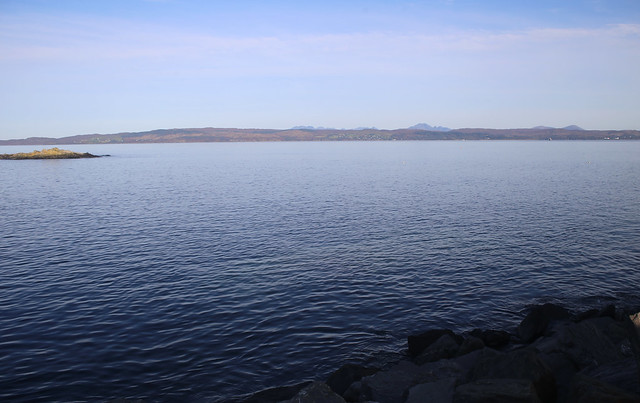 I then walked back to the main road through the village and past the harbour. 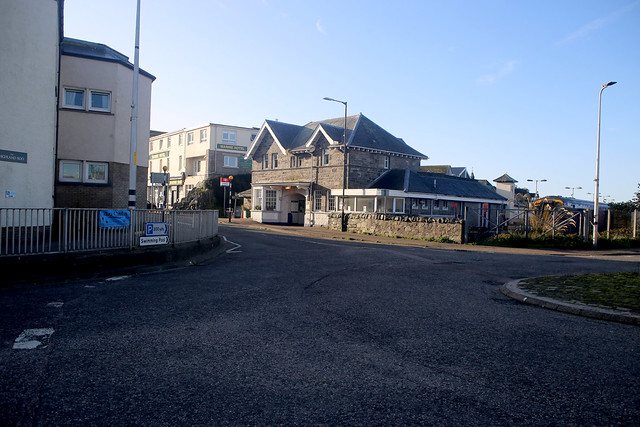 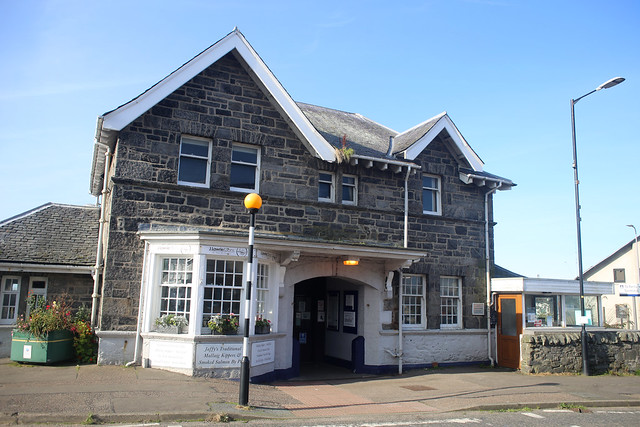 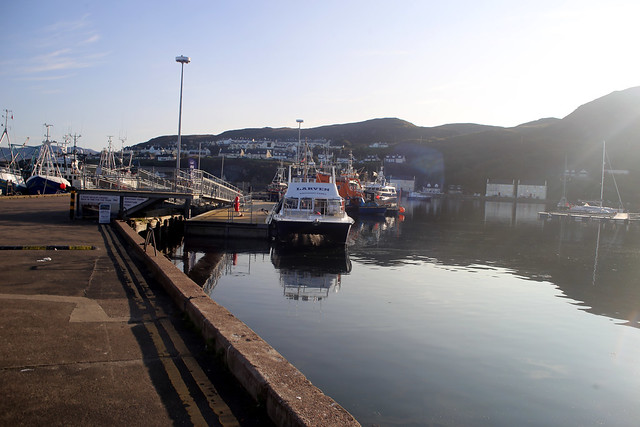 I considered walking through the industrial estate at the harbour but I’m not sure if it’s a dead end and there seemed no views of the sea so I stuck with the main road instead, passing the station on my right and harbour on my left. The harbour was busy with the ferry to Knoydart just loading as well as that for Skye. I followed the road beyond the harbour, which soon became a quiet residential road, with fine views of the bustling harbour. 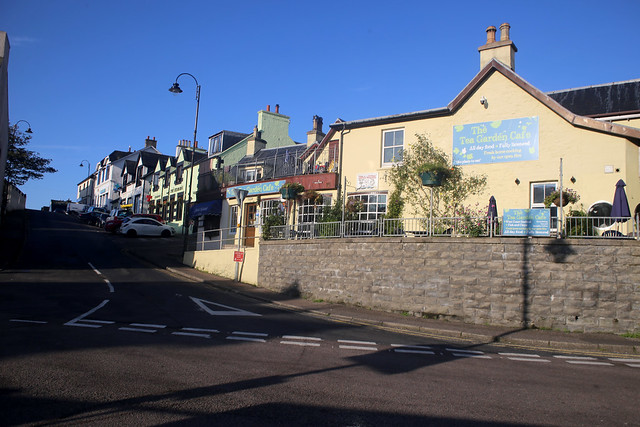 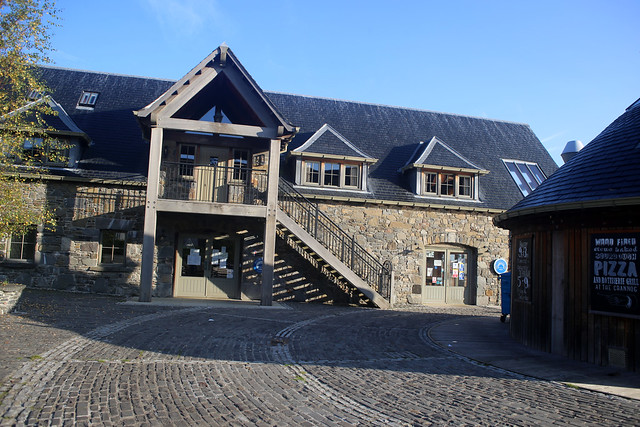 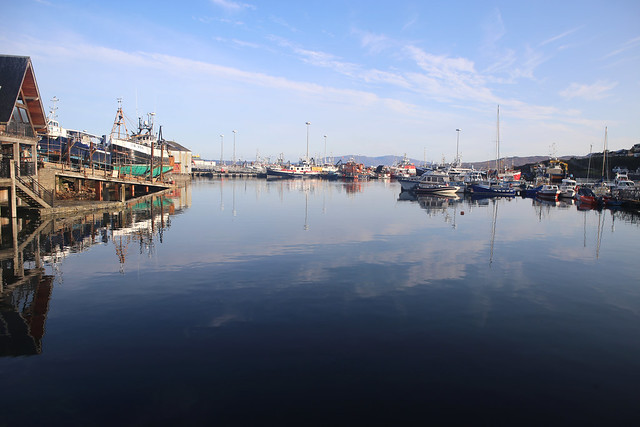 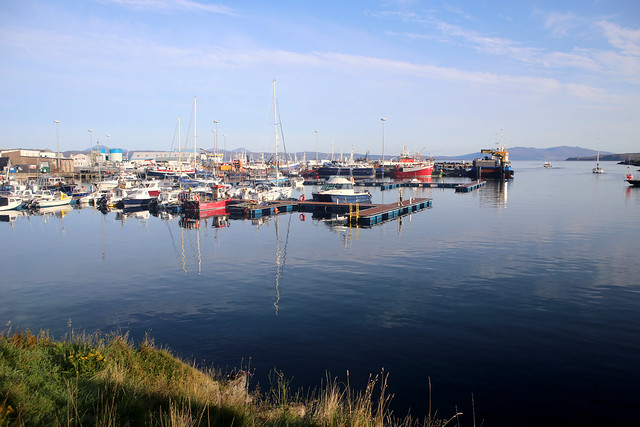 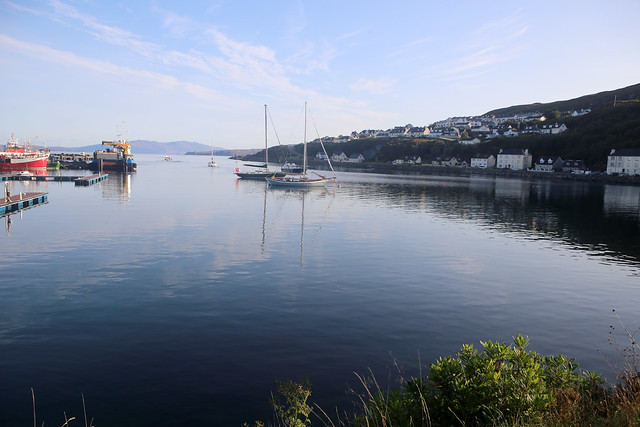 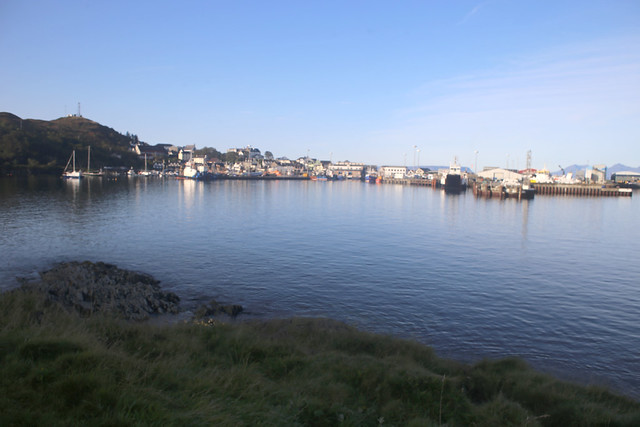 Mallaig is a busy port. Ferries leave here several times a day to Armadale on the Isle of Skye and to Inverie on the Knoydart peninsula. In addition there are regular ferries to the “small isles” of Eigg, Muck, Canna and Rum and another ferry to South Uist. All in all it is a busy place given it’s size.

I am now in the area known as East Bay, I passed some information panels giving the history of the harbour and continued along what became a quiet residential road. 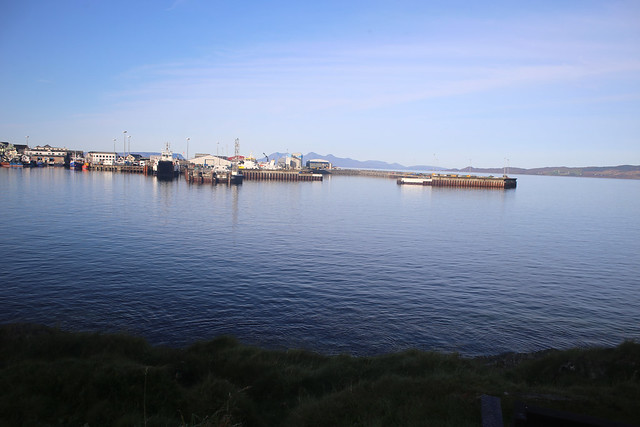 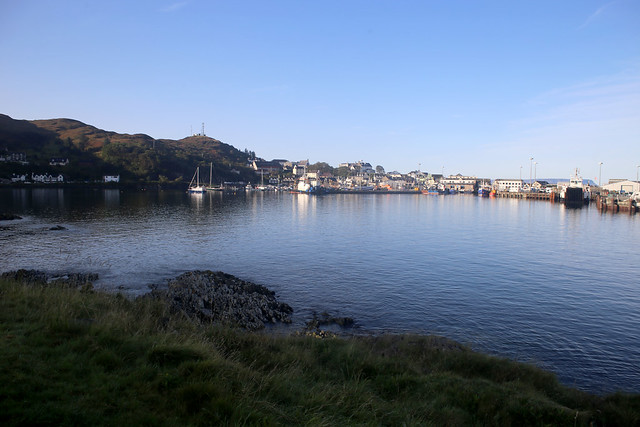 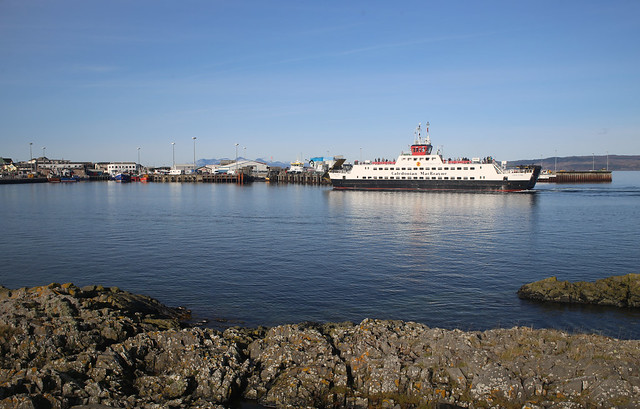 The road soon began to head uphill from the harbour, having so far been at sea level. After passing an area of more modern housing the speed limit of the road increased to 60mph, just as it became narrow and extremely steep (the pavement ended, too). 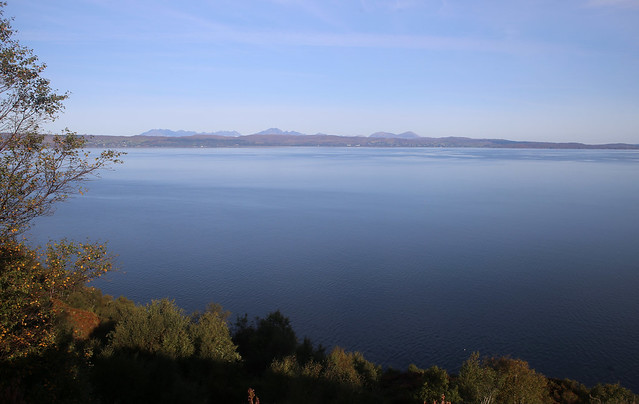 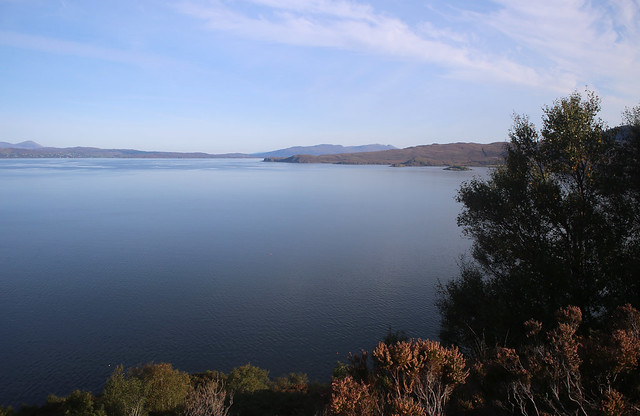 I headed up here and was rewarded with a fine view back over the harbour. Having reached the top of the hill the road descended into a small valley with houses now dotted around, but rather more sparsely than before. 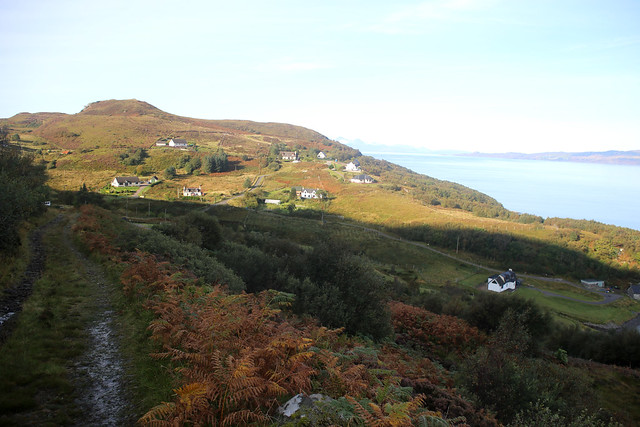 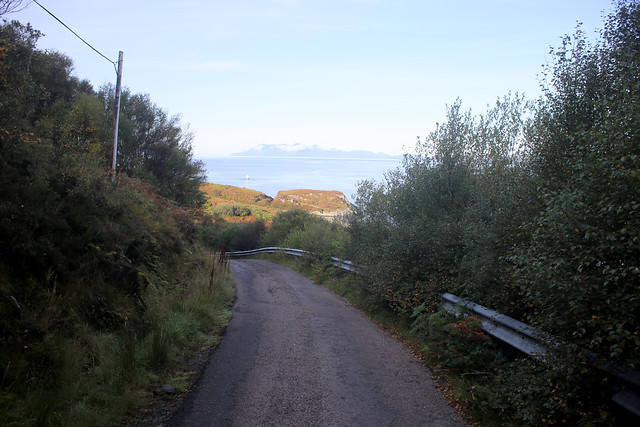 This is the little village of Malaig Bheag. After the valley the road climbed up and ended at a turning circle at the end of the public road.

I had read Ruth’s write up of this walk before doing it myself and followed in her footsteps to continue on the track that leads to Mallaigmore. Ruth commented on finding a car that looked to have been abandoned parked in the turning circle (marked “No parking”!). I found a 10 year old Volvo. Not the first flush of youth, but far from abandoned.

I headed up the track cut into the hill side which soon began to climb and give fine views. 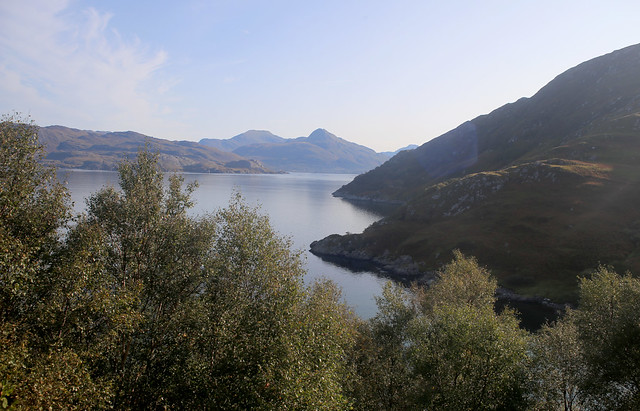 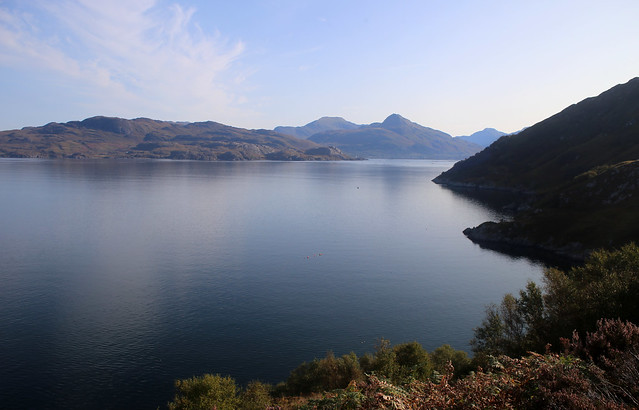 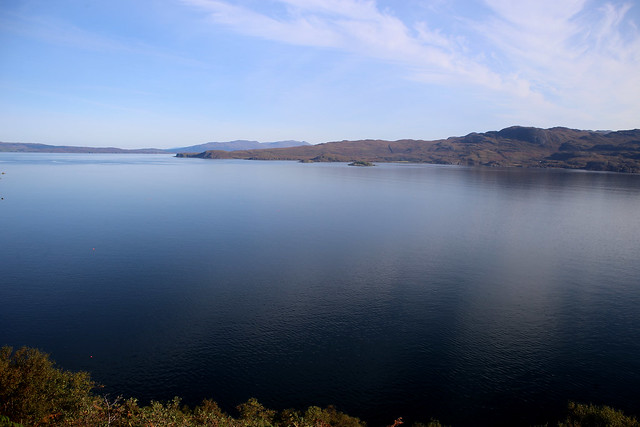 At the top I descended down into the little valley with the seemingly single house at Mallaigmore. 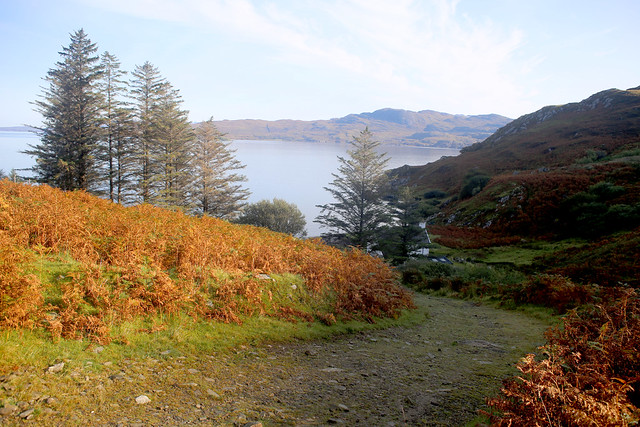 Here I saw the other car Ruth originally thought was abandoned. As she found the resident of this house has a knackered car (probably no longer road legal) used to drive along this rutted private track. They then park their road-legal car (probably the Volvo I saw) at the end of the public road. So they have two cars, a beaten up one for driving on the the track and an ordinary car for the road. Today the beaten up old car was parked by the house, suggesting the owners were in residence.

Like her, I didn’t want to invade their privacy. There was no obvious onward route along the coast. Instead, I re-traced my steps back along the track to the public road and back to the car park.

It was a nice short walk to end this trip, which was also my last of 2020 with some nice views and lovely weather too.

Now for the long drive home. I was fortunate on the A830 to pass the Jacobite steam train making it’s way along the railway line to Mallaig (the road runs beside the railway line in places), but with a few hold ups, it was nearly 11pm when I got home. Fortunately my painful ankle slowly improved over the next few days, so that was good and I never had any more problems, so still not sure exactly what caused it.

If you prefer not to do a there and back walk as I did, there is a bus part of the way to Mallaigmore, though it will only save you about half a mile of walking as it stops in Kingsway the other side of the little bay from Mallaig Harbour.

This entry was posted in Inverness and tagged Malaig Bheag, Mallaig, Mallaigmore. Bookmark the permalink.