On my last walk I walked from Corran to Glenelg, which took me past the tiny and abandoned settlement of Sandaig. At the time I wasn’t clear if this path would take me to the coast and even if it did, it was a dead end so making a there and back walk. I didn’t really have the time or energy to extend that walk, so I missed out Sandaig.

At the time I was happy with this but on reading others accounts of this walk I began to regret missing out this bit of the coast. It was around 2 years after I did the previous walk. I’d progressed further south but due to the number of lochs, peninsulas and so on I was still staying in Fort William for this trip, but I knew it would be the last time I’d stay here on my coast walk (at least, for the mainland). Fort William was still in travelling distance to Sandaig and I knew that if I wanted to go back this trip was probably my last opportunity to do so.

I had made good progress in 2022 so decided to spare the time to make a return trip and see the bit of coast I had missed out before. This was actually my first day of this trip and I thought it would make a gentle introduction. Also being a Sunday when little public transport ran in the area it made sense to do a walk that didn’t rely on public transport anyway.

I was staying in the same hotel as in 2020, the Premier Inn Fort William so I headed off on the long drive to Sandaig. I think it took about 2 hours and I passed the “Glenelg (Earth) twinned with Glenelg (Mars)” sign again and once again failed to stop to take a picture of it.

At the start of the path to Sandaig  beside the road there is a gravel area where I could park and no other cars were parked here at the time.

From where I’d parked I was right beside the signed path to Sandaig, so I set off down the car wide track which I think is used for logging activity in the surrounding woodlands (I had found on my previous visit the area was not as wooded as suggested on the map).

I soon came to a T-junction but fortunately a sign had been put up making the way ahead clear so I turned left and soon the path came to another direction where an arrow on the ground pointed the way over the river. The river flows from a loch on the hills above about 2 miles away, but already the river is quite wide. 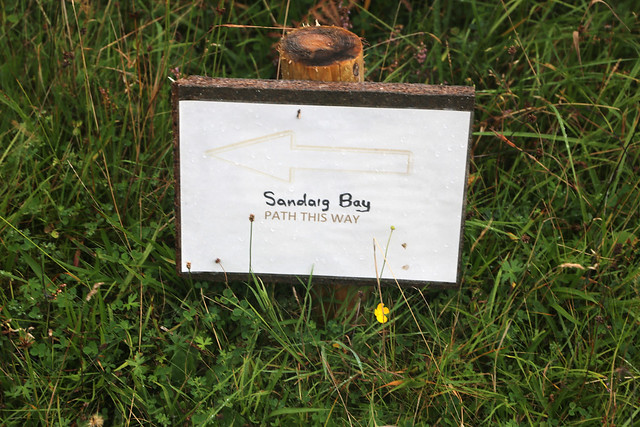 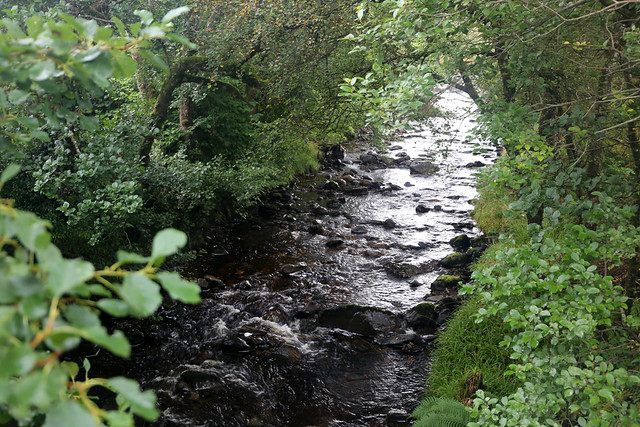 This prompted me to check the map as this didn’t feel quite right. It was right, the problem is I wasn’t where I thought I was! I thought the path had started from the tiny settlement of Upper Sandaig beside the road, where a path is marked and the Ordnance Survey map has the “Walks” symbol (a blue footprint). That wasn’t actually where I had started but instead on the track about 250 metres further north along the road on a wider track. Once I had got the grid reference I could spot what was going on and used the map to navigate the rest of the way.

Mostly i was following wide logging tracks, soon with fine views over Sandaig Bay and Sandaig Islands behind it. The path narrows as I descended, emerging at the south end of the bay. 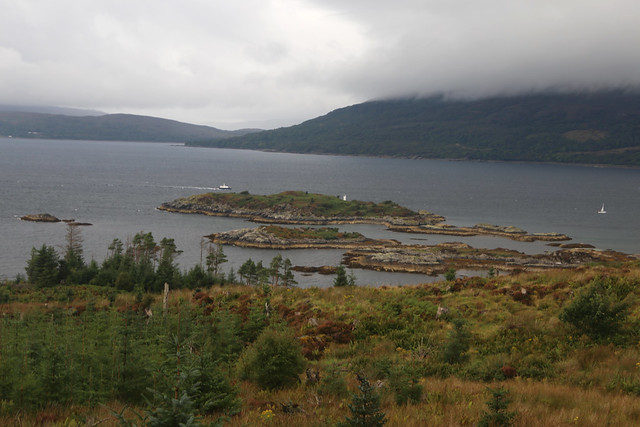 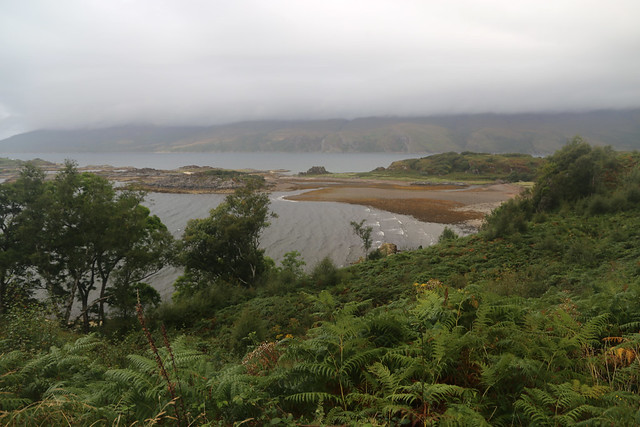 The bay here is perhaps best known as the home of author Gavin Maxwell who bought a house here. He wrote a book called Ring of Bright Water whilst living here about otters he bought back from Iraq and raised here in this remote corner of Scotland. I confess I’ve never read the book (though I hope to get around to doing so at some point). The book was a success, selling more than a million copies and was even made into a film.

Unfortunately Gavin Maxwell was not one to enjoy the fame it bought him (he was believed to be bipolar). He was already a heavy smoker but also began to drink heavily and smoke more. As a result he was running out of money and his agent suggested a sequel. The sequel bombed, causing further problems. The house he lived in at Sandaig was destroyed by a fire in 1968 also killing one of the otters he had written about. He moved to the island of Eilean Ban near Kyle of Lochalsh, clearly someone who liked remote places. However the island is not remote now, since the Skye Bridge (and hence the A87) now runs across the island. I’m sure he’d have hated that. He had plans to build a zoo here which seems rather optimistic given the limited catchment for visitors (unless he intended it as a private zoo).

However given the amount Maxwell was drinking and smoking it was soon to become his downfall. He was diagnosed with lung cancer and died not long after from it (though reportedly continued to smoke and drink even whilst in hospital at the end).

Anyway back to my walk. Now down on the beach I headed west along the beach towards the islands. 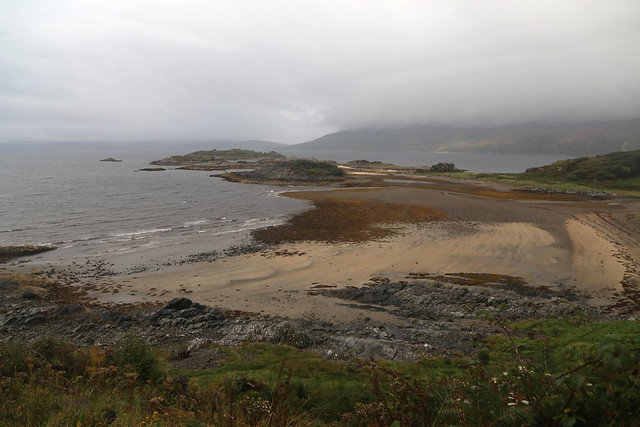 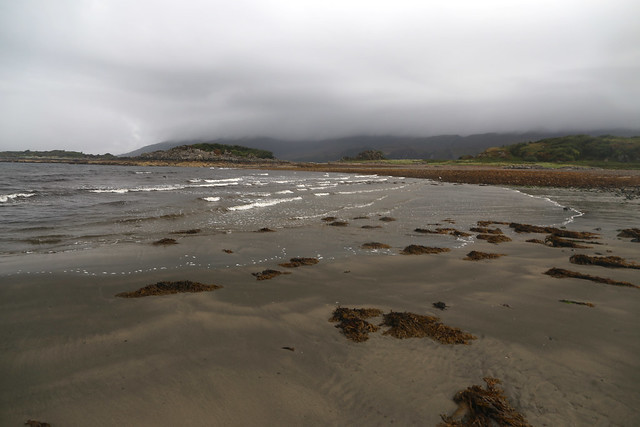 This looked quite small and shallow until I got closer when I could see it was wider and deeper. 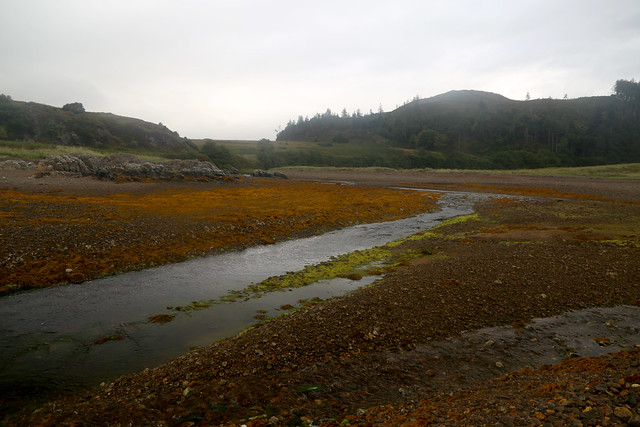 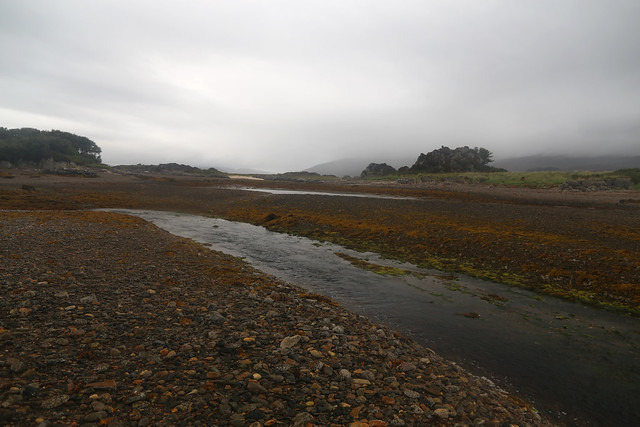 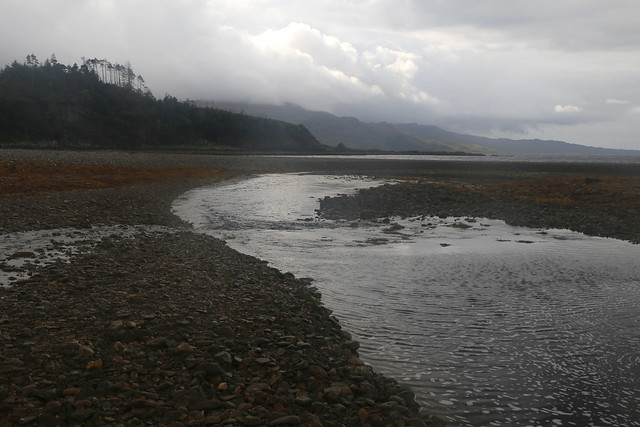 Too wide to jump over, too deep to get through without getting wet feet or taking off my shoes. Since I had another walk planned for this afternoon I preferred not to get wet feet if I could help it.

Instead I headed up through the grass at the back of the beach. 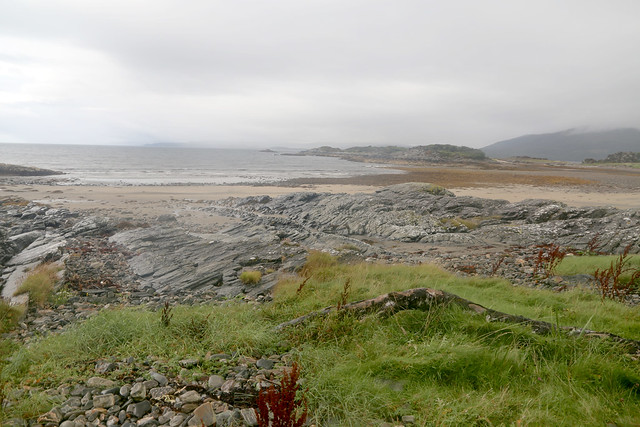 Here to my surprise was a building. This was not the house Gavin Maxwell lived in but I’m not sure what it was used for. Regardless this was a remote spot and very much “off grid” so it would not be an easy place to live. 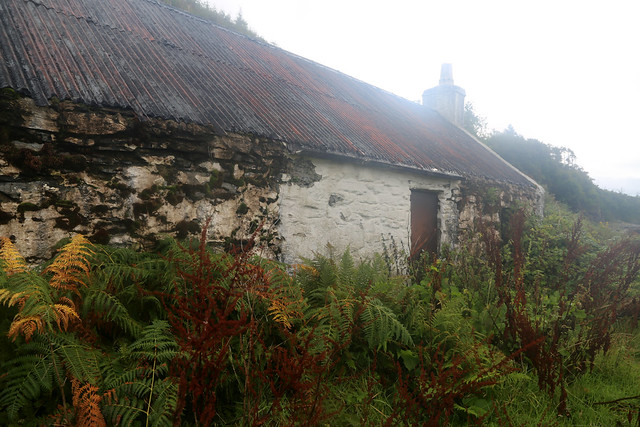 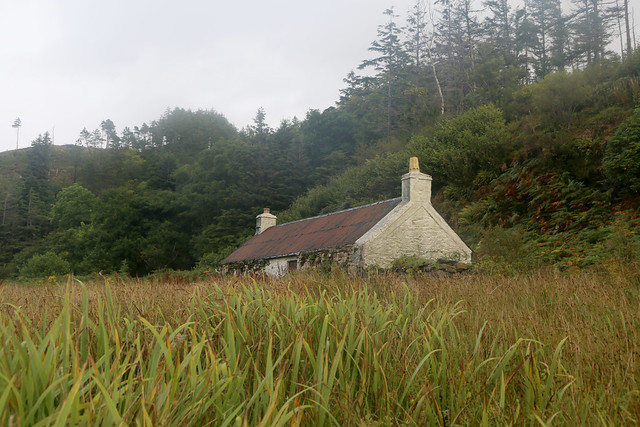 Somewhere in the grass was meant to be a memorial but it was pretty much waste high and I couldn’t spot it, nor did I fancy battling through the grass for ages, especially as it was all wet from rain.

Instead I headed upstream where the river goes into woodland. Here are the ruins of another house (but again, this was not the one Gavin Maxwell lived in). It has clearly been ruined for a very long time with only the outer walls remaining and and fairly mature trees growing up from within the building. 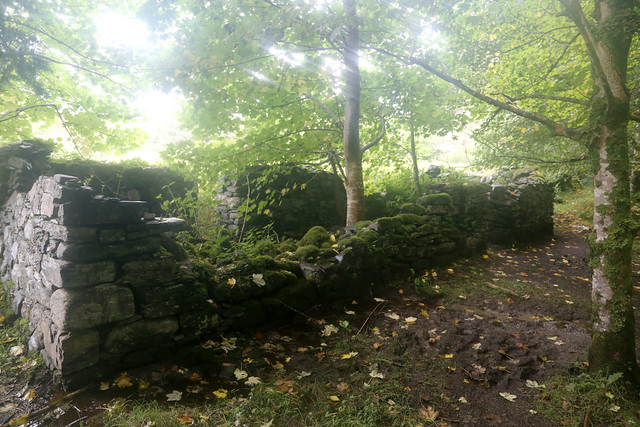 At the far end of this wooded area is the river and here again I hoped to cross, but it was too deep with some possible stepping stones submerged. There was a rope but I didn’t fancy my chances of making it across tarzan-style without falling in! 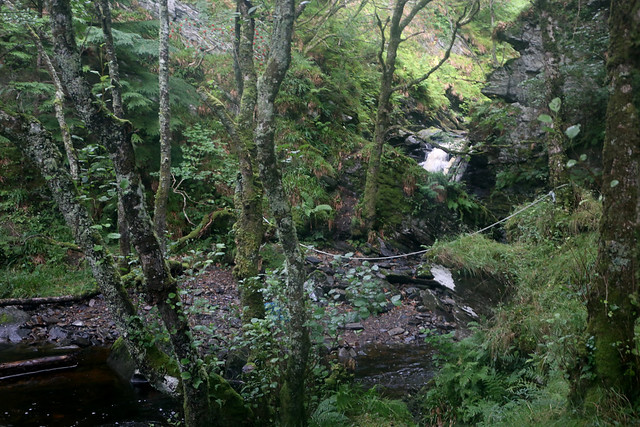 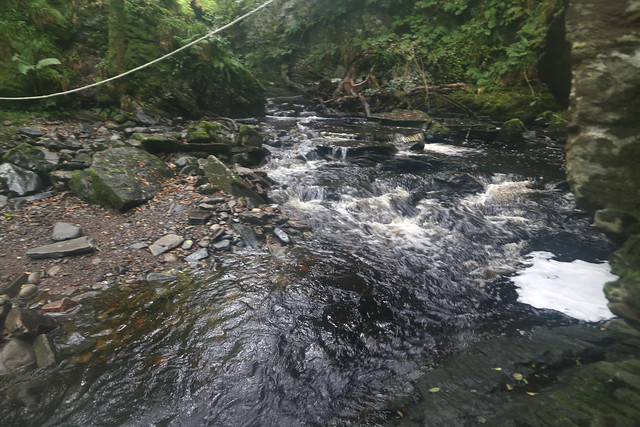 That meant unless I wanted wet feet (I didn’t) I wasn’t going to get to the islands. Still I had enjoyed coming to this wild, remote and beautiful place and was glad I had made the effort to come back before I moved further south along the coast, out of range.

It must have been both a happy and sad place and I think after the house Gavin Maxwell lived in burned down the settlement died. To my surprise the naturalist Terry Nutkins also lived with Gavin Maxwell and continued to live in Glenelg until he died in 2012. I remember watching his wildlife programs as a child, it is sad to know that he too has died, and it starts to make me feel old.

It is time to move on. I head back up the track at least remembering the way I came back. 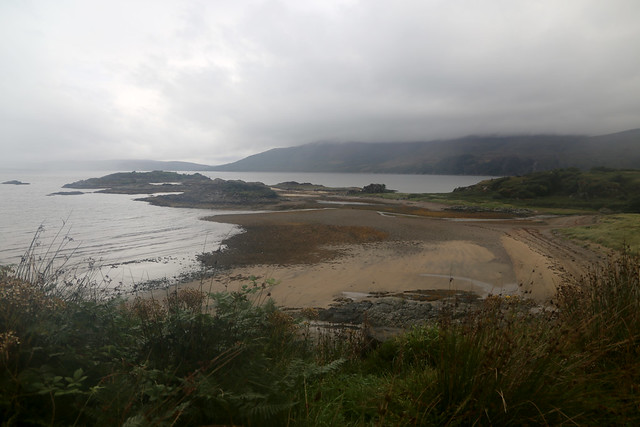 I had seen no one at Sandaig on my way down but I passed a couple of couples on the way down (one of whom was glad to know they were indeed going the right way). They asked me if it was worth the visit (and how much further) and I confirmed it was.

When I got back up to the road there were now quite a few cars parked here (mine was the only one when I arrived). Sometimes I wonder what happened to the abandoned villages I encounter. At least I know here even if it is a rather sad tale. But it must have been a beautiful and peaceful place to live.

Here are details of the public transport for this walk:-

The only public transport to Sandaig runs on Friday only, must be pre-booked and the timings don’t really make it possible to make a day visit unless you walk up to Glenelg and stay the night there (the Glenelg Inn does accommodation), but here are details of it:-

The section of the bus route between Corran and Glenelg runs only on Fridays and only by request. You need to request by calling 01599 511384 before 9pm the previous evening.