Today I had a plan to walk from Lochcarron on the north side of Loch Carron to Stromeferry on the south side. However due to logistics I planned to do it as two separate smaller walks from Strathcarron.

I drove to Strathcarron and parked in a little square. I got the last space as the rest of it was full of motor homes that had I presume parked here all night, outside peoples houses. The residents must hate that! Strathcarron is a small place with houses around this small square a post office and a few other houses dotted off a minor road to the north. However it has another facility that I haven’t found in anywhere I’ve been for many hundreds of my last miles of coast walking. That is a railway station. The last place I have walked that had a station was Thurso. There is also a small hotel which occupies the former station building though I’m not sure if it’s open, there doesn’t seem much sign of life.

The station is my reason for starting mid-way on this walk, at Strathcarron. So far on this trip and my previous in 2020 I’ve had no luck catching buses. All the buses I’ve tried to catch have either failed to turn up or have required pre-booking and when I phoned to pre-book I was told the bus wasn’t running. I am hoping now I am somewhere with a station I will have more luck with trains. There aren’t many trains on this line, the departure board shows the next train heading east is not for more than 4 hours and with only 4 trains per day running between Inverness on the east coast to Kyle of Lochalsh on the west coast, it still requires a fair bit of planning. From Strathcarron westwards all the stations are on or close to the coast, which is helpful for my future walks. 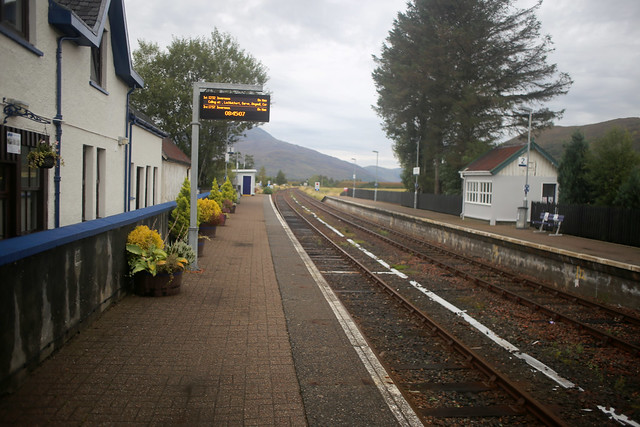 My plan than is to leave my car here and walk to Lochcarron. From Lochcarron there is a bus (at least according to Traveline) that will take me back from Lochcarron to Strathcarron station around mid-morning. It is due to arrive at Strathcarron station 5 minutes before the train to Kyle of Lochalsh. From there I then plan to take the train to Stromeferry and walk back to Strathcarron. Splitting it like this is the only way I could make the transport connections work. I am hoping 5 minutes between the bus arriving and train driving will be enough because I think it’s meant to be a connection and there is no ticket office or ticket machine at the station, meaning I can buy a ticket on board from the guard without risk of a penalty fare and hence I don’t need to allow time to buy a ticket.

I headed down to the road by the Strathcarron Hotel (which looked to be closed at the time, but I think is open now). There is a level crossing on the road to my left and ahead some rather odd structures in a field. 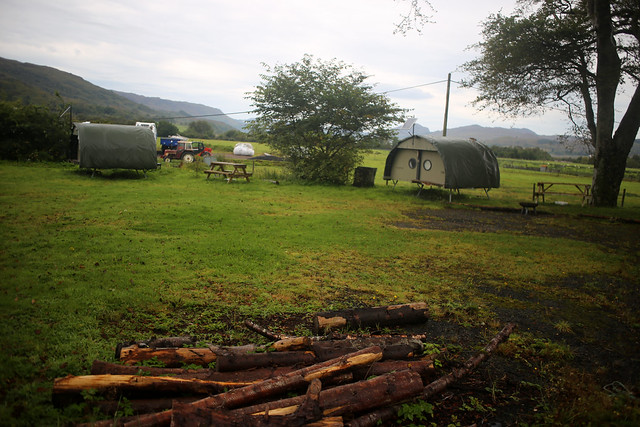 Apparently these are “glamping pods” owned by the hotel which you can stay in. I am not sure why they are raised off the ground like this, it must be rather odd if you need to get up for the toilet in the night to remember you are suspended above the ground!

Now on the road I turned right and followed the road which soon crossed the river Carron at the head of the loch. 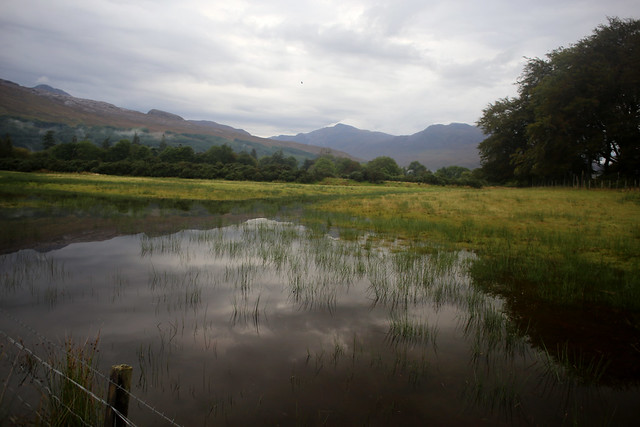 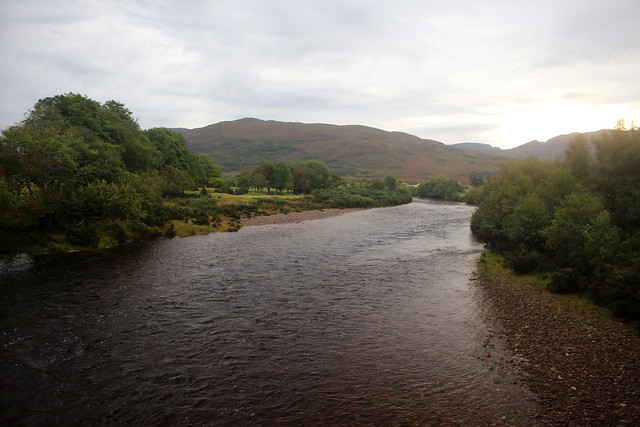 Just after this I was pleased to find a footpath signed off to the left, showing Lochcarron 4km and also to Ribhauchan. 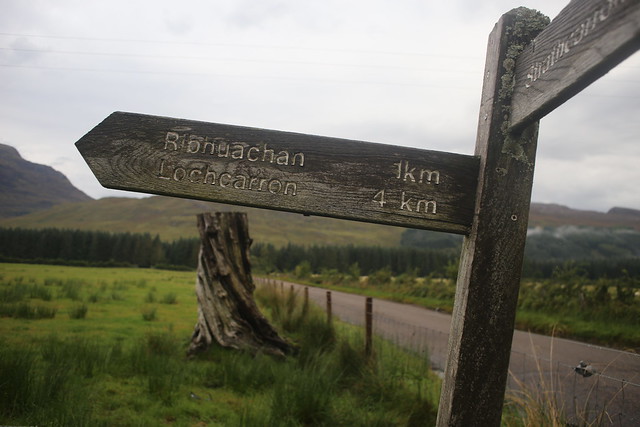 Looking at the map I could see this footpath was closer to the coast and would cut off the corner, which was nice. The path was obvious, since it was basically a car wide track with tire tracks along it, presumably used by the farmer. The sheep I disturbed were clearly not too impressed at me using this track. 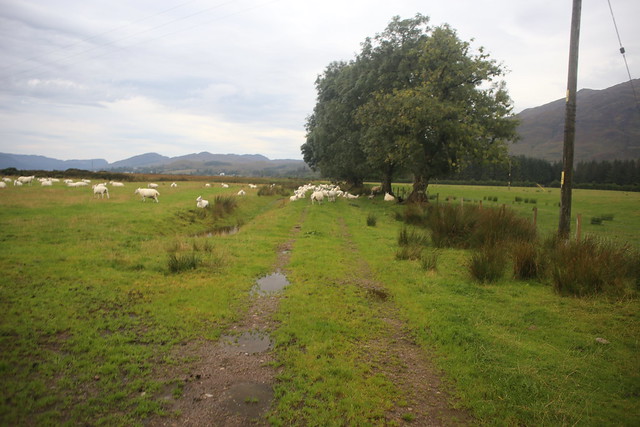 After about 1/3 of a mile I came to the Balnaglash Burn, where a ford and footbridge were marked. In fact the options for crossing it were extensive. There was a footbridge on both sides of the track (which seemed overkill) and also stepping stones next to one of these two bridges! Here I am standing on one bridge and you can see the other and the stepping stones alongside. 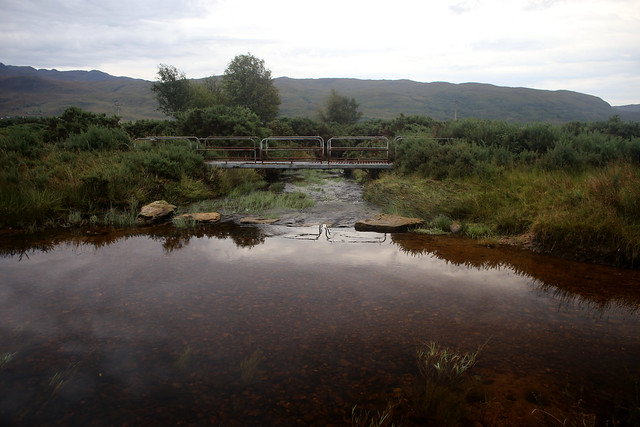 So I made it across with ease. The track then continued to the A896 at Ribhuachan. 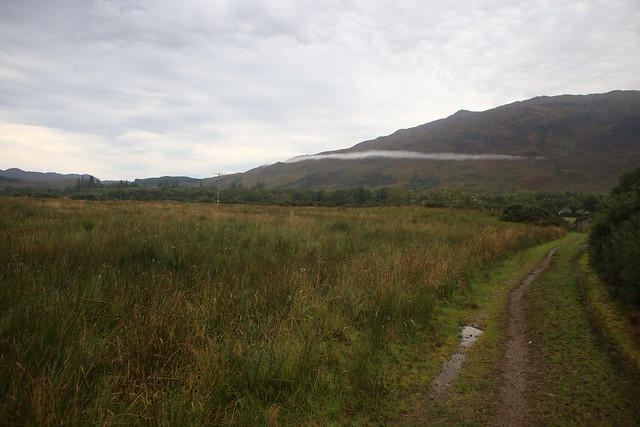 Most of the facilities here were aimed at tourists, the Smithy Heritage Centre, a couple of craft shops (including a pottery) and a cafe. Every single one of them was “closed due to Covid”. 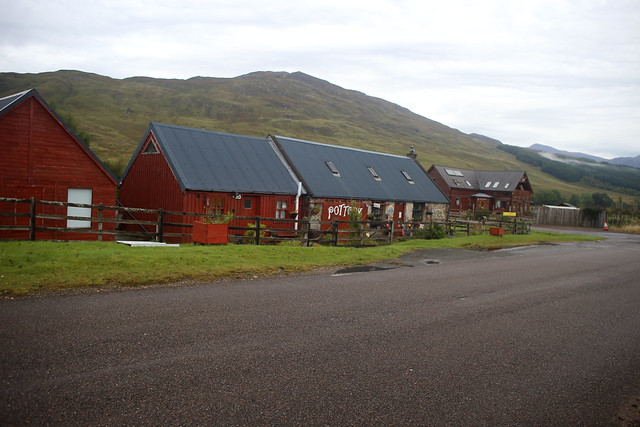 I stuck to the A896 until Lochcarron Golf course where there was an old chapel on the right. 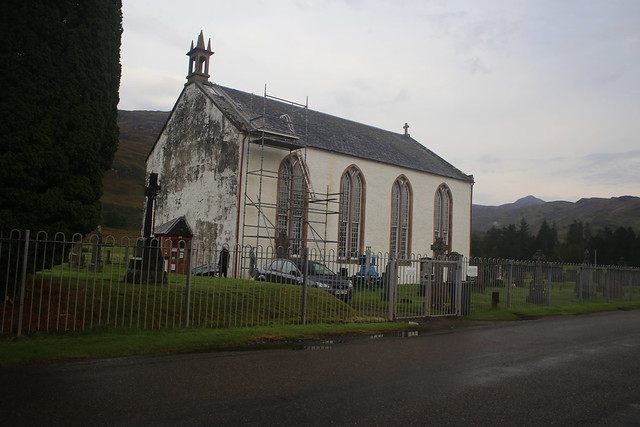 Just past this I briefly diverted to walk along the edge of the golf course to get off the road, since no one was playing (I’m not sure it was even open). Not long past this I reached the edge of Lochcarron, where the road had a welcome pavement. 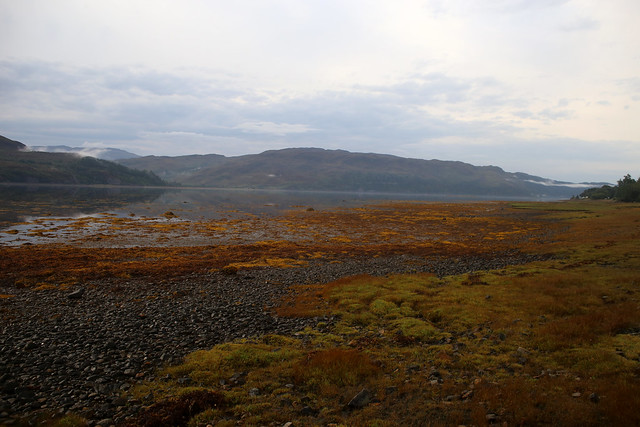 On the right in a field a sign informed me this was the site of the proposed Lochcarron Leisure Centre, which struck me as optimistic, since it’s only a small place, but I wish them the best of luck. Lochcarron is a long thin village stretched out for a little over a mile along the road. It is very pretty and has a beautiful outlook over the loch, where clouds were hanging over the hills and mountains around it. 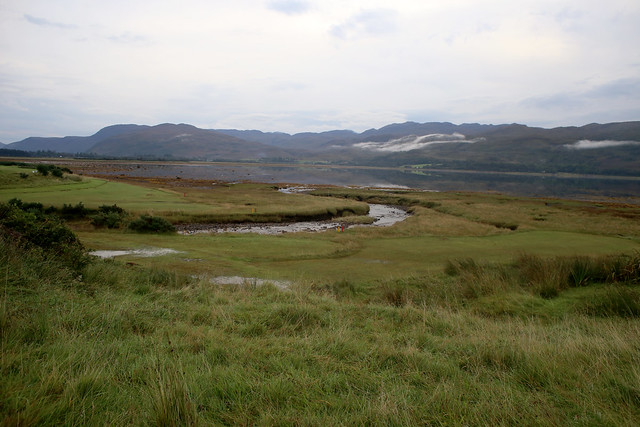 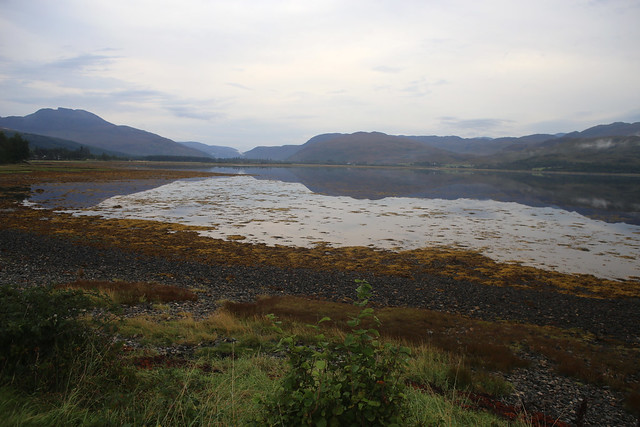 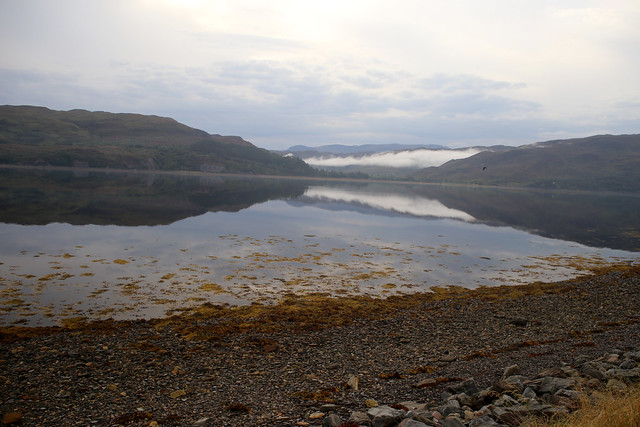 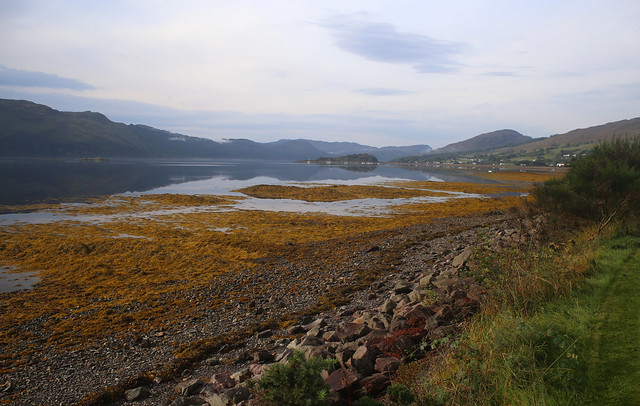 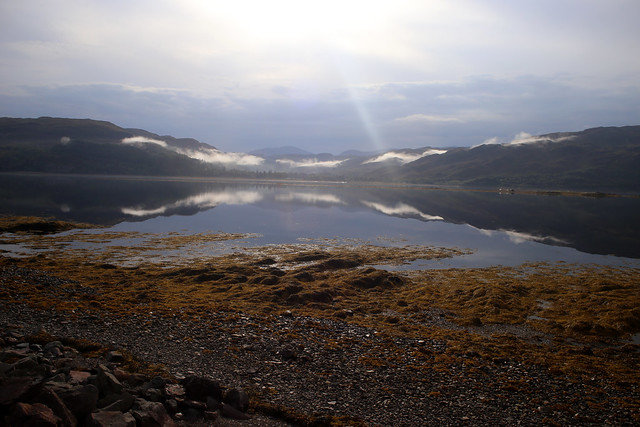 The houses here look not to have much of a gardens since many have sheer cliffs behind them as a result I saw a couple had erected washing lines on the edge of the shore! 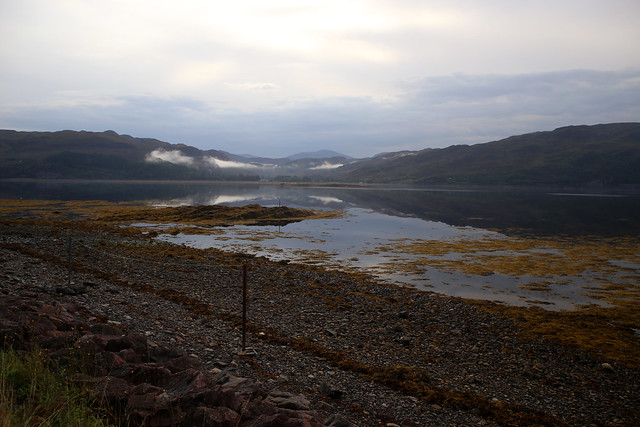 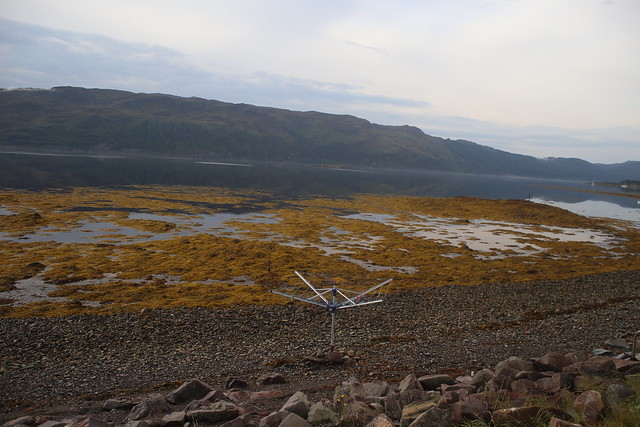 I continued to the rather grandly titled Lochcarron Food Centre (the Spar supermarket), where I was able to buy food for my lunch. This was also listed as the stopping point for the bus.

Now I waited for the bus outside the shop, due at 10:30 for the 10 minute journey to Strathcarron. I had 5 minutes to change from the bus to the train at Strathcarron, so I hoped it was not going to be late. 10:30 came, but no bus came. At 10:40 with still no bus, I gave up. The bus was due to be in Strathcarron by now so there was no way I’d get there in time for the train, which I had checked from my phone was indeed running on time. That was very irritating but not entirely surprising.

On the previous occasion I’d try to use the same bus route further up the coast Torridon, it hadn’t arrived then either, despite Traveline assuring me that it would. This is very frustrating. I know that it has been difficult for bus companies with the Government repeatedly telling the public not to use public transport if at all possible for many of the last 6 months and to only make essential journeys. Indeed the company running most of the buses in the town where I live was Arriva who eventually gave up completely and announced they were closing their depot and ceasing all routes (though at least my local route was taken on by Stagecoach). However surely if bus companies are to survive companies need to actually run them, or update publicity and Traveline if they are not!

It was only 4km back to Strathcarron. If I tried to arrange a taxi it would probably take some time to arrive, if there even was one, so I was resigned to having to walk back to Strathcarron, it was likely the quickest option, but it would throw out my carefully made plans. So I set off to walk back the same way again. Of course 5 minutes after I set off, the bus then came past me (running 15 minutes late), but I didn’t know it was coming as I couldn’t see behind me and hadn’t been looking as I’d given up on it coming. I tried waving but the driver either didn’t see me or decided not to stop. I’d have still missed the train however, as it had already left (I had heard it on the other side of the loch), but it would have saved me the extra miles!

So I headed back the same way I came other than I stuck to the road rather than diverting over the golf course again. I was soon back at Strathcarron and now my car was the only vehicle parked here. I was frustrated my plans had been foiled by the bus not running on time but it was still fairly early in the day so I decided to work on an alternative plan. I soon worked out an alternative plan, which was to drive back to Stromeferry and then take the next train (which was in more than an hour) back to Strathcarron and do that part of the walk in reverse instead, but I’ll save that for another write up, to avoid confusion.

So this had only been a short walk and mostly on roads and I’d ended up doing it twice. However it was a lovely walk with beautiful views over Lochcarron, on both sides of the loch and it had been an enjoyable walk. I was also relieved that from here to Kyle of Lochalsh I’d no longer have to rely on buses!

Note that as far as I can tell the bus no longer runs so there is no longer any public transport between Lochcarron and Strathcarron.

Here are the complete set of photos for this walk: Main Link.

6 Responses to 357. Strathcarron to Lochcarron