353b. Applecross (Shore Street) to Sand

This morning I had cycled and walked the section of coast between Cuaig viewpoint and Sand and so now it was time to continue south.

I left the car where it was at the southern of the two car parks at Sand and decided to cycle south to Applecross. Now a point on the name. Most maps mark the main village on this peninsula as Applecross. Locals will tell you that it’s actually called Shore Street (as the road signs say) and that Applecross is the name of the entire peninsula. Either way that is where I was going!

I had hoped the cycle ride was downhill the whole way. It wasn’t, there were a good number of uphills too, which I found hard on a folding bike not really designed for the highlands of Scotland. I did however notice that motorists are more considerate to cyclists than walkers. I am used to it being the case that when I walk on a single track roads, vehicles will blast on past a passing place towards you and expect you to step off the road onto whatever is beside it (which might be grass, but is sometimes mud or bog) to get out of their way. Whilst when on a bike they wait for you at the passing place, which was nice.

There are several car parks around Applecross Bay but I opted to park in the main car park in Applecross (Shore Street). The car park is quite small, but I locked my bike to the post holding up the “parking regulation” notice. This time I even remembered to take the key out and put it in my pocket!

Applecross or Shore Street, as it’s known by locals, is the main settlement of the whole peninsula. Although a small place this is a remote area and so it has a cafe (closed due to Covid), pub, self-service petrol station and takeaway van. After the drive to get here from Fort William and my morning walk it was now 2pm and I hadn’t yet had lunch.

I had some sandwiches and other snacks in my rucksack I bought from a petrol station on the edge of Fort William. However it was a really lovely day, weather wise, I was not sure what I was going to do for food in the evening (as I was staying a long way away, in Fort William so would likely not get back until quite late) and the pub had about 8 outside tables, only 1 of them was occupied. I decided I would see if I could have a hot meal for lunch from the pub as it looked like there was room.

The empty tables should have been a warning sign. I mean a sunny Saturday in August, with pub tables overlooking the coast, with a beautiful view and yet only 1 group of people there? Of course, there was a reason for it. The pub and all the out buildings all had the same notice attached giving a long list of “do’s and don’ts” related to Covid. The first was that you must make a reservation online (and only online) and absolutely not occupy a table without having “checked in” with the staff. Well the first problem with this is that there is no mobile signal at all on the peninsula. This makes it difficult to make a reservation online when you cannot get online in the first place! Outside the pub were 3 members of staff in high-vis jackets bearing the name of the pub (Applecross Inn).

So I asked the first of them if they were still serving food, it being 2pm. I was told that yes they were but only if you had made a reservation. I explained that I hadn’t been able to make a reservation because there was no mobile signal and asked if it be possible to use their Wifi to make a reservation for now. I was told that no, the Wifi is only for customers and that in any case they were “fully booked”. I pointed to the mostly empty tables outside and asked if the outside tables were also booked. Then the response changed to “we’re short staffed” and he just walked off! Well not short enough of staff to have 3 people standing outside whose primary job seems to be to tell would-be customers to go away! Well that made it clear that really they were just making excuses and didn’t want to serve me.

I’ve walked the entire coast of England and Wales by this point and the east and north coasts of Scotland and used many pubs for meals or drinks. I’d never been turned away, though I had of course sometimes found that it was busy, so no tables were free or were all booked at the time but in this case I’ve always been offered one later if I wanted, or to eat at the bar instead or that I was welcome to have a drink. Or even in one case that they’d do me a takeaway if I wanted instead! We are all aware how much of a struggle it has been for the hospitality industry, to be closed down for much of 2020 and that they needed support so I found it very odd they were quite happy to turn customers away and leave these tables empty and pay multiple members of staff to stand outside sending customers away. I shall certainly say that it’s the most unfriendly pub I’ve encountered on the coast and it seems a very strange business model to only serve customers that have make a booking in advance on the internet when there is no mobile signal for miles around.

As I left, a motorcyclist standing nearby who had overheard the conversation sympathised and commented that he’d been told the same and suggested it was because “we’re not locals, they only want to serve locals”. Well he could well have been right. It certainly gave an added dimension to the graffiti I had seen at the start of the Applecross pass when coming here, under the sign warning the road was impassible in wintry conditions had been added “Beware of the midges. Beware of the locals”. Where the first of these statements was certainly true and I was beginning to suspect the second might have some truth to it, too. 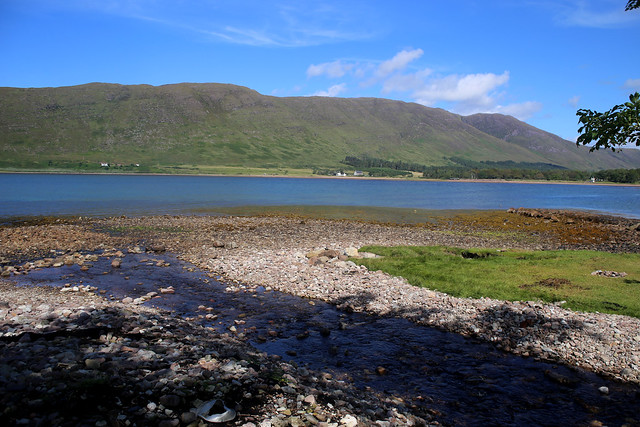 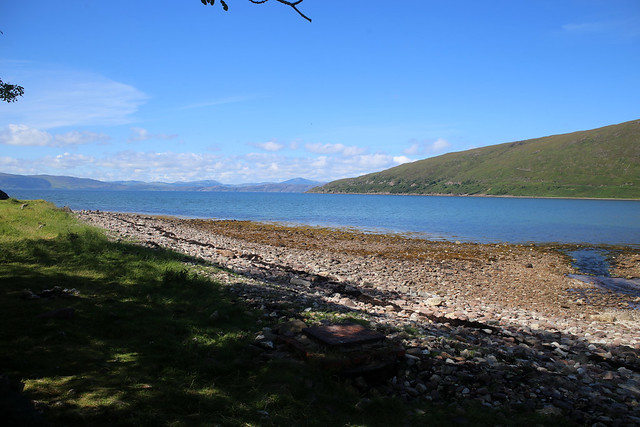 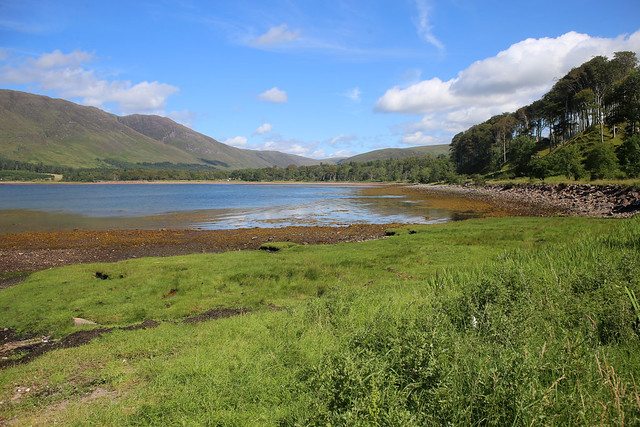 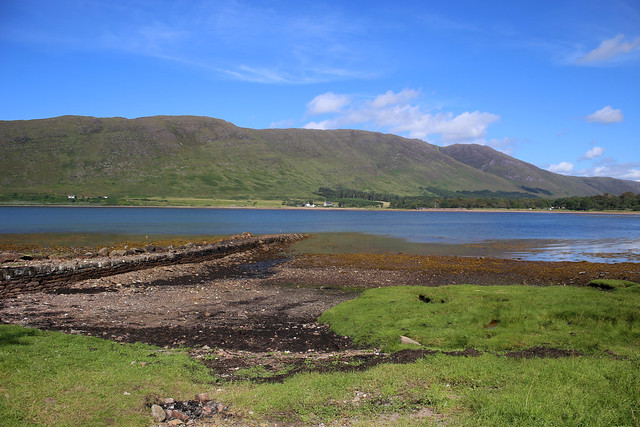 So with that disappointment I began walking, passing the start of the Applecross pass (that I had driven over earlier), with it’s many warning notices and around the side of the bay. 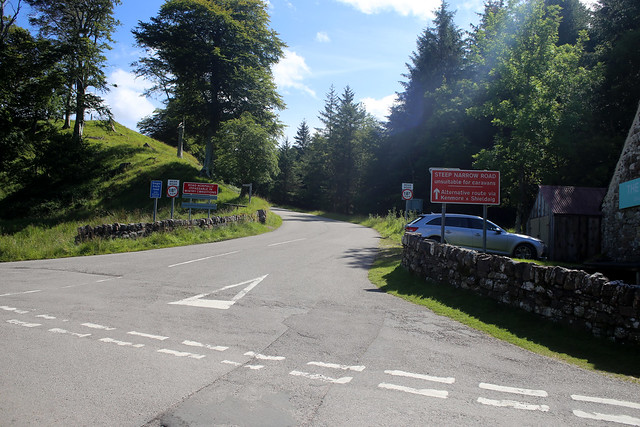 Part way along, once I was away from the crowds in the village I sat at the back of the beach and ate my packed lunch there instead. 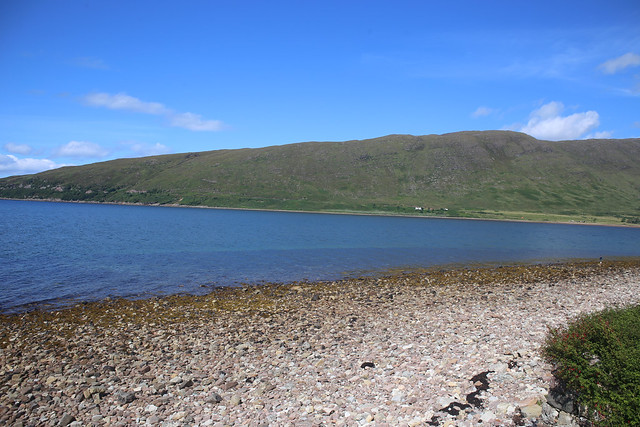 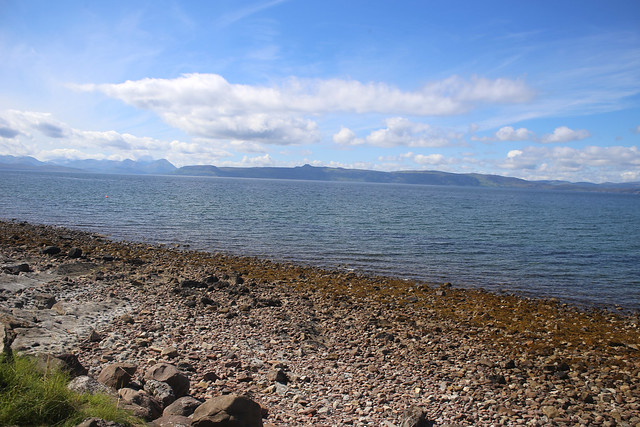 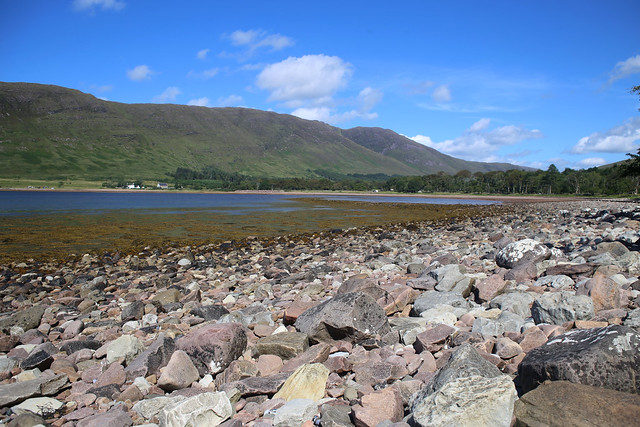 It is a very pretty beach so it was not a huge hardship to only have a sandwich. The beach is pleasant, backed by a line of trees. 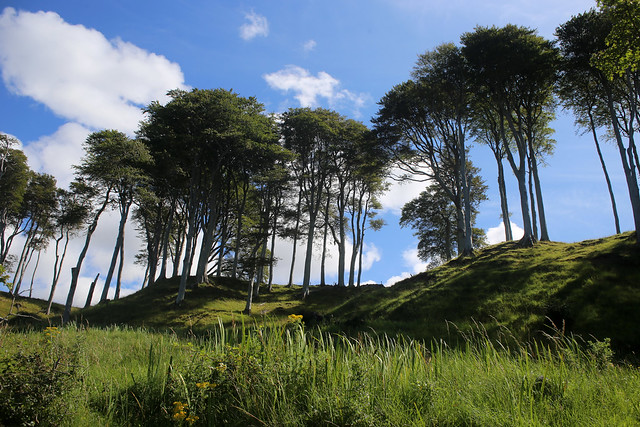 I tried to walk across to the other side of the beach over the sands rather than the road but when I reached what I thought would be a stream it was much deeper than I had expected. 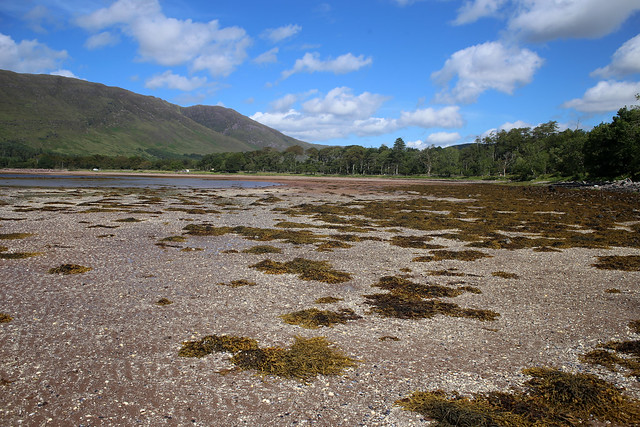 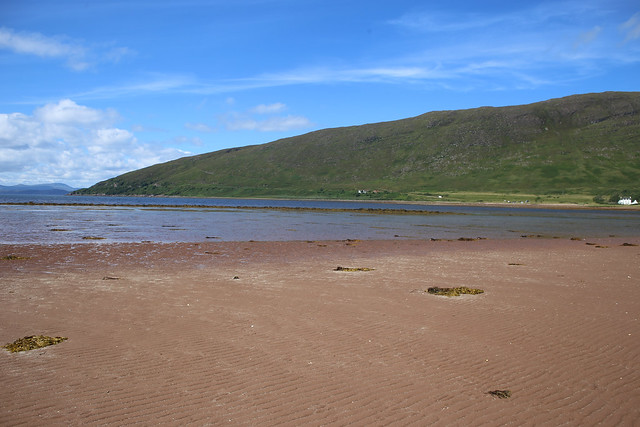 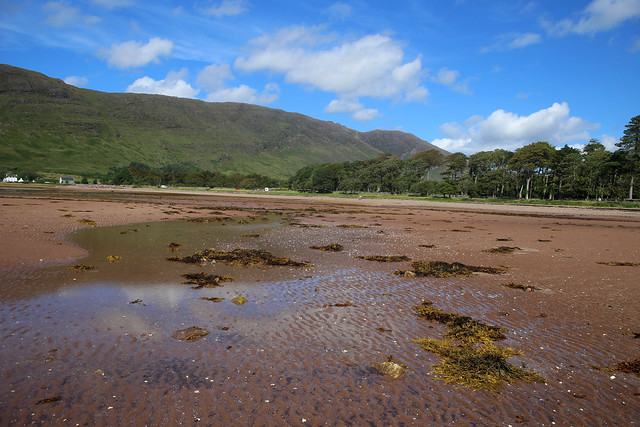 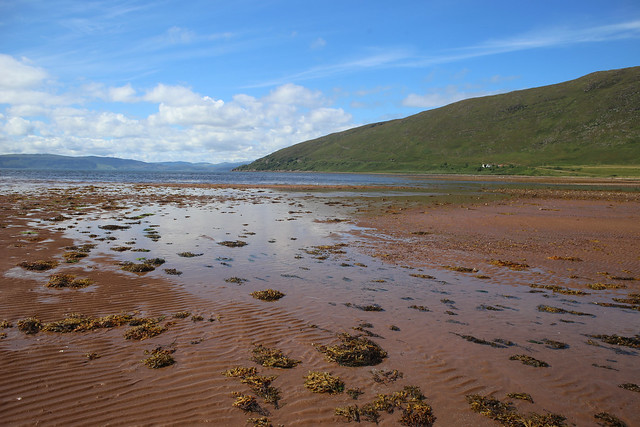 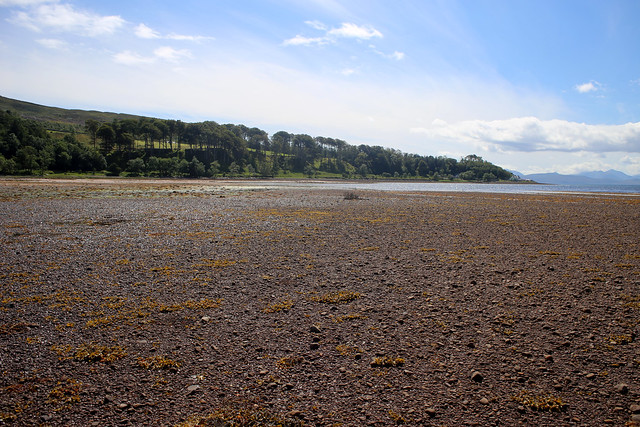 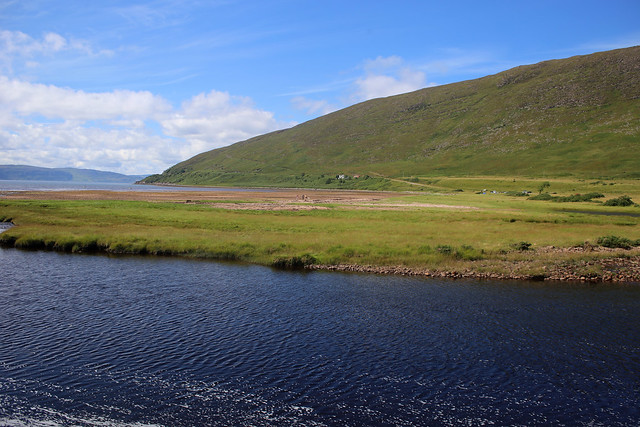 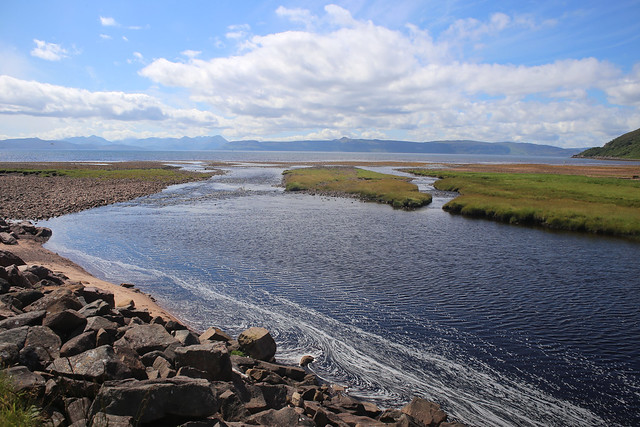 Time for plan B. Plan B was to head back to the road and use the bridge to cross instead. 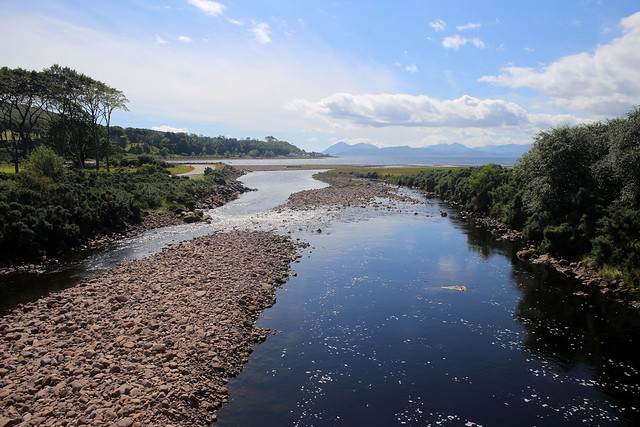 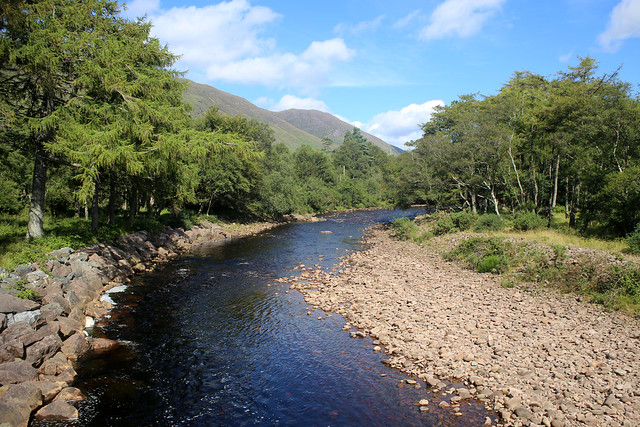 The bridge was a narrow single-track metal bridge. Even the roadway was metal and I remember it clanged and rattled when I drove over it earlier in the week. Beyond the road surface too was a mess as road works seemed to have been part completed, leaving areas of gravel, but it was no problem on foot. The beach is backed by quite a large area of marsh formed around the river. 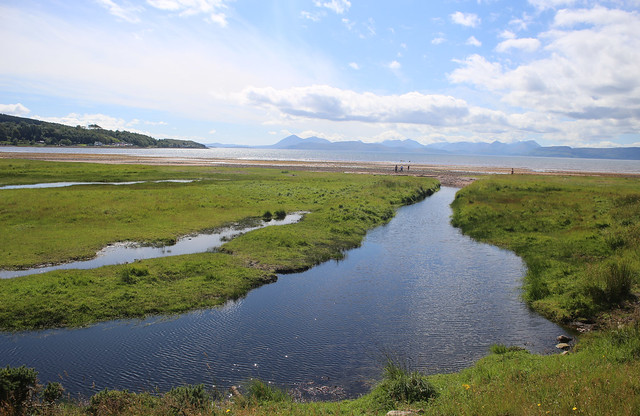 I soon passed a monument which marked the opening of the road I was now walking on. It was opened by Princess Margaret in 1976. 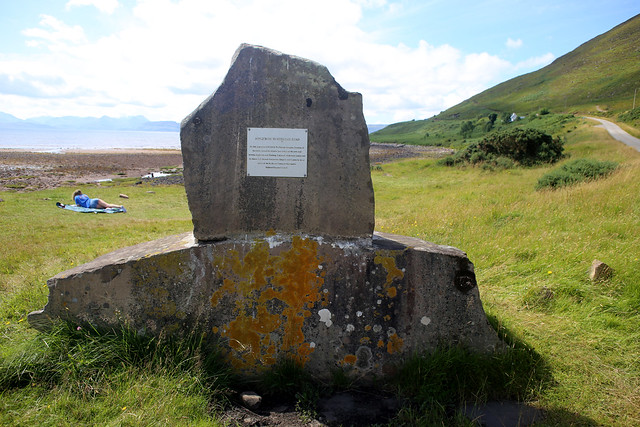 It is hard to think that before that some of the communities along the road were inaccessible by road and those that were accessible could only get here over the Applecross pass, which is often impassible for much of the winter. (I later found that before the coast road opened, there used to be a ferry from Toscaig to Kyle of Lochalsh which could often operate when the Applecross Pass was closed).

Around the other side of the bay I continued on the road, passing another small car park, which now began to climb a bit away from sea level (this had been a nice bit to cycle on the way here!). 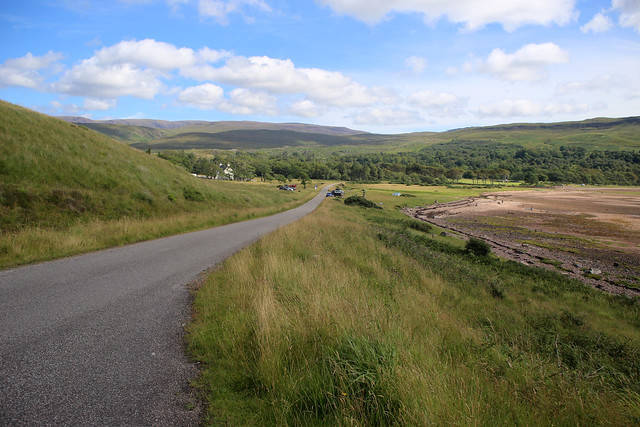 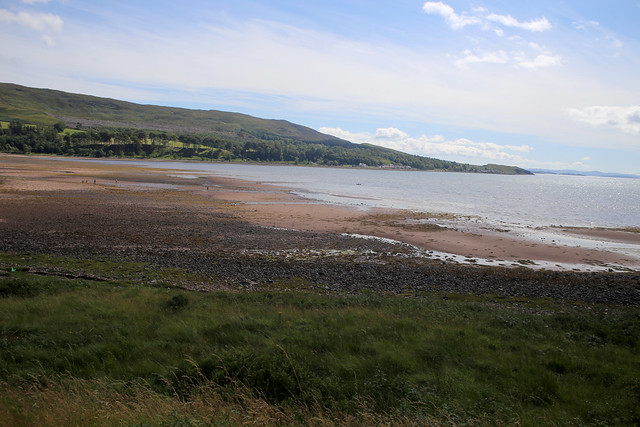 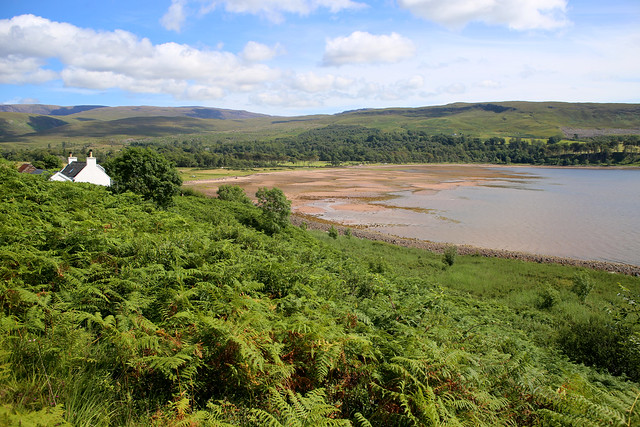 The road climbed steadily to Rubha na Guailne where the village of Applecross (Shore Street) was now a dot on the horizon. Along with that miserable pub. Rounding the corner I still had land off to my left, but now it was the Isle of Skye and I could see the peaks of Cullin Mountains very clearly. It is a very beautiful view. 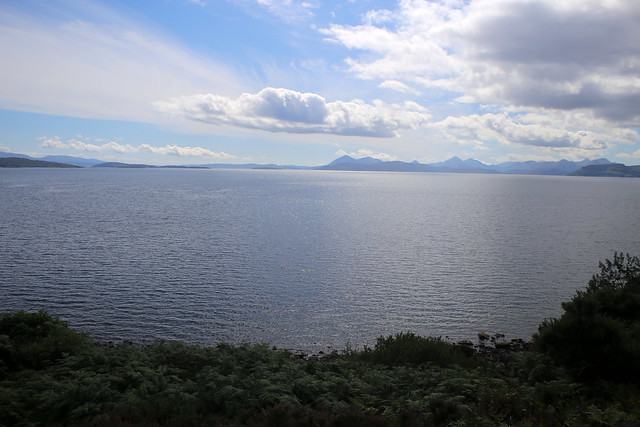 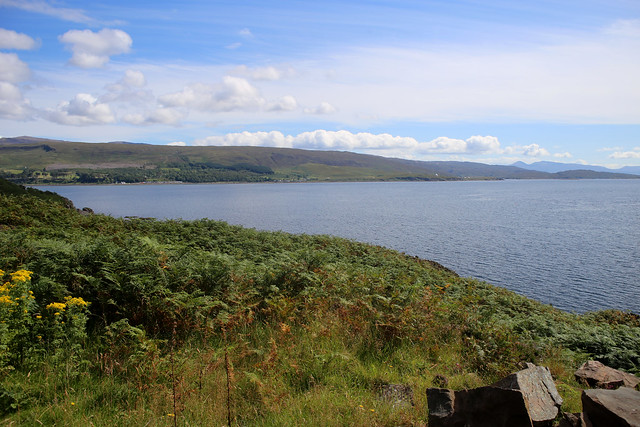 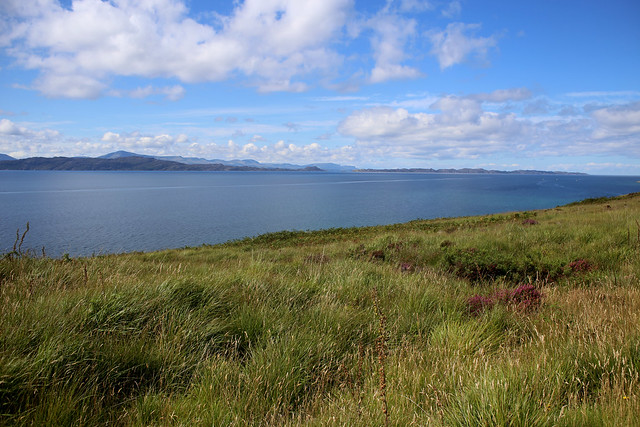 The road soon levelled out and I made rapid progress along the road. I soon passed a crushed pair of sunglasses on the road. I wondered if they had been blown off the head of someone sitting in a convertible car!

The Cullen Mountains continued to impress and ahead I could soon see the rather ugly military buildings at the north end of the beach at Sand. To my left the water was clearly shallow near the base of the cliffs and with sand underneath which gave the water that lovely turquoise colour, it was quite stunning. 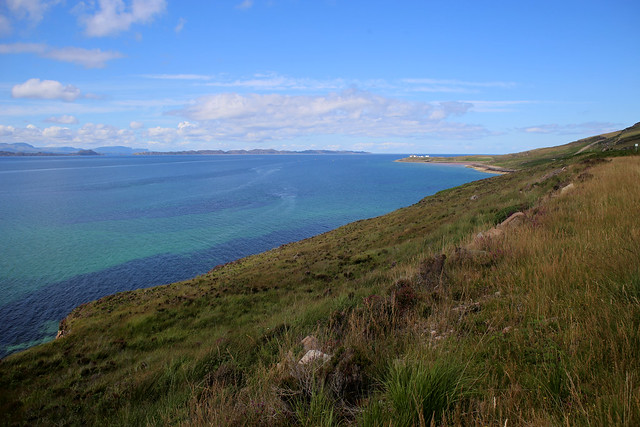 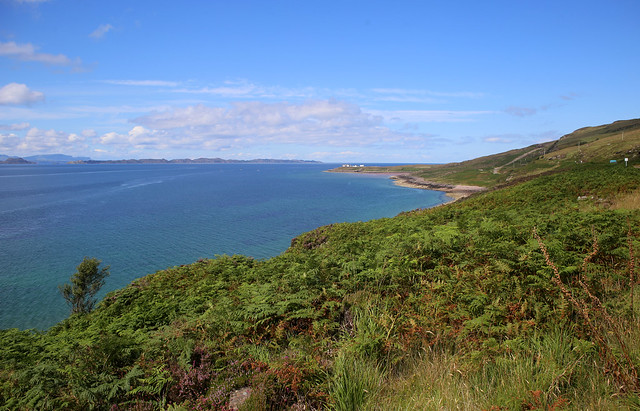 On my right I soon passed a small waterfall. There are several of these along this road, a consequence of the land rising so high just inland, and the amount of rain that often falls here. I didn’t have far to go now and soon I reached the car park and was back to my car. 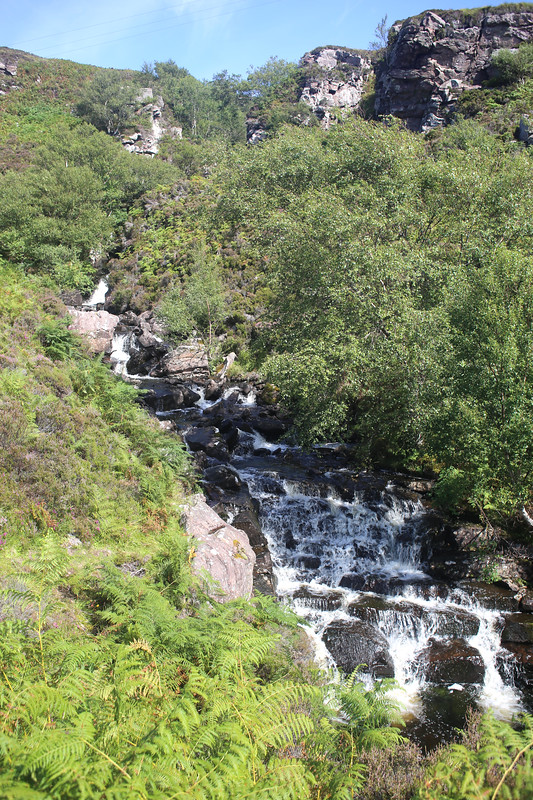 I wasn’t done for the day. I now intended to drive onto Applecross (Shore Street) and cycle to Toscaig, where I’d walk back to Applecross (Shore Street). However to save causing too much confusion, I’ll write that up as a separate walk, as I did it in the opposite direction in the end (as there was nowhere to park and I had to drive onto Toscaig).

This was a short but lovely walk along the coast of the Applecross peninsula. Due to the lack of bus, requiring me to cycle the road as well as walking I was making slower progress around the Applecross peninsula than I had expected, but when the area is so beautiful that is no bad thing and it gave me the chance to see the view both ways.

2 Responses to 353b. Applecross (Shore Street) to Sand