Two months earlier, I had to abandon my planned days walk (the last of that trip) which would have seen me get as far as Poolewe when I discovered that my flight home was cancelled and had to cut that walk short. Now I am back to partly fill the gap.

Where I ended that walk was in the small parking area at grid reference NG872848. Or pretty much half way between Aultbea and Poolewe (my intended destination).

This wasn’t my main walk that I had planned for today and I was here to part fill in the gap on my way further south (I filled this gap as two short there and back walks, of which is the second I did, but the first I am writing up). At the time of doing this walk, the gap I had left was now from Inverewe Gardens to the car park at the view point at grid reference NG872848, because I’d already walked from Poolewe to Inverewe gardens (and back again) earlier on this trip. I had another walk planned for later today so was doing this short walk first on the way.

I was staying in Ullapool again so first drove around the coast to the view point. Ullapool really was too far away to be a good base now. Gairloch would have been a better choice as it is over an hour to drive to the view point, but I could not find anywhere to stay for the whole duration in Gairloch so had ended up back in Ullapool.

I reached the view point and parked up – and it is a lovely view, too. 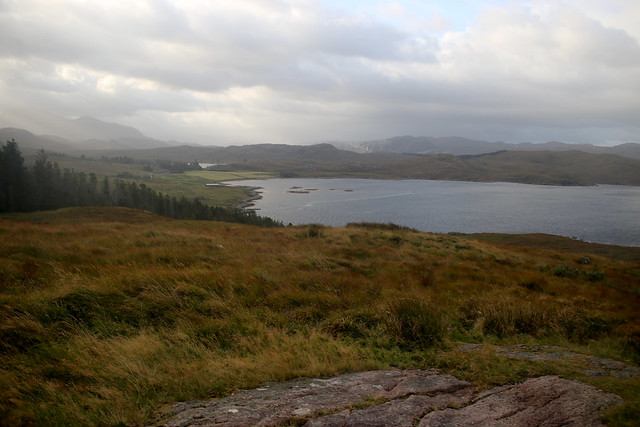 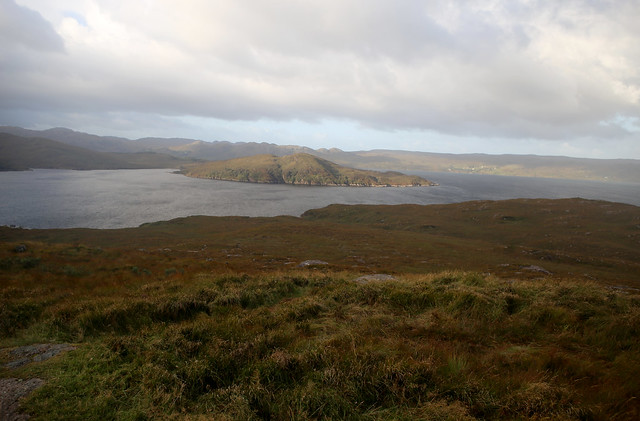 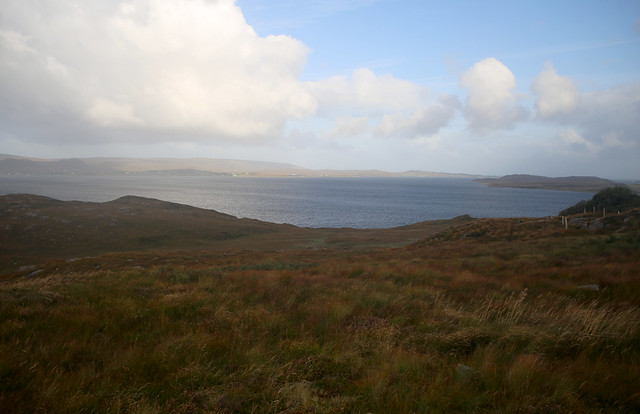 I was not planning to use the bus today (there is an infrequent service on this road) so this would unfortunately be a there and back walk, both ways along the road and I was not especially looking forward to it because I knew the road didn’t have a pavement and whilst not busy by the standards of most A-roads in Britain a lot of the traffic was heavy and fast moving.

Initially I had nice views over Loch Thurnaig to my left but soon I was passing an area of coniferous woodland, though this did not last for long and soon I had fine views again. 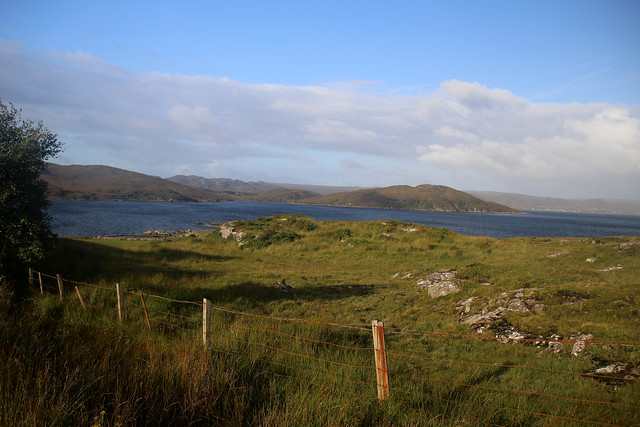 The road was now descending down to the little hamlet of Tournaig in a long sweeping couple of bends. This meant at times I was about 500 metres back from the coast but soon the road turned back down to the coast as I reached sea-level. At the bottom of the hill was a strange brick tower, I am not sure what it is used for. A water tower possibly or perhaps a remnant from World War II. 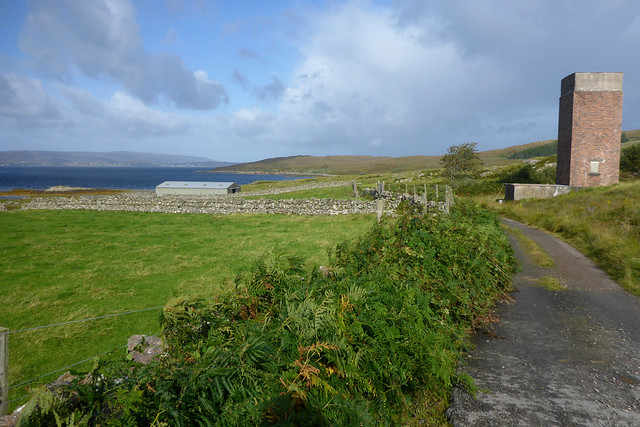 I was grateful there was a bit of grass verge along this section and I soon reached the farm at Tournaig Farm. Just beyond the farm the road crossed the water that flows out of Loch nan Dailthean on my left. 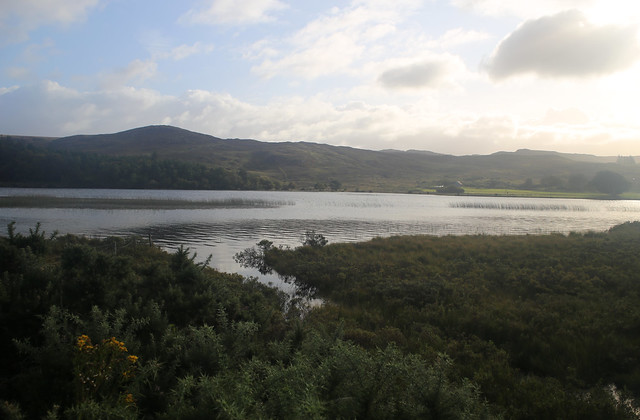 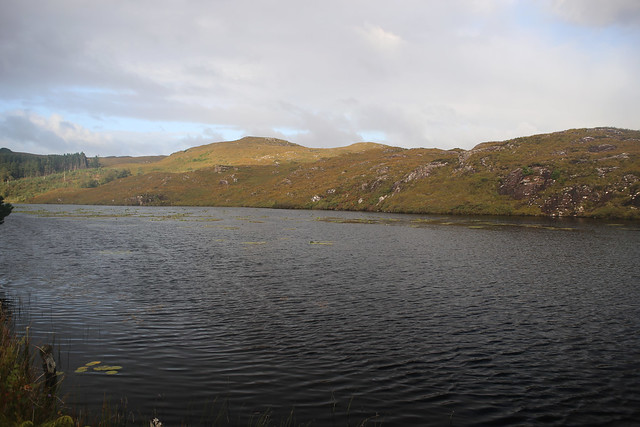 The road was narrower now, having lost the white line down the middle and I was now climbing again. The road was soon parallel with the the edge of the loch on my left and it was rather pretty.

Sadly the road soon turned a bit away from the loch but a few hundred metres later I was alongside another loch, Lochan na Ba Caoile according to the map, it was another pretty loch (or rather lochan, since this one is much smaller). 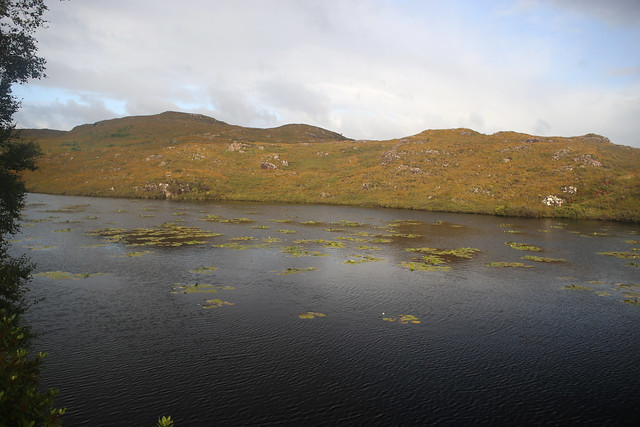 Now unfortunately was the part of the walk I was not looking forward to. The road now entered woodland, restricting any views, it was also quite twisty and hilly and little space between the edge of the road and the trees and rocks beside it. Thankfully for most of the time I was able to find some verge when traffic did come and was on both sides of the road. 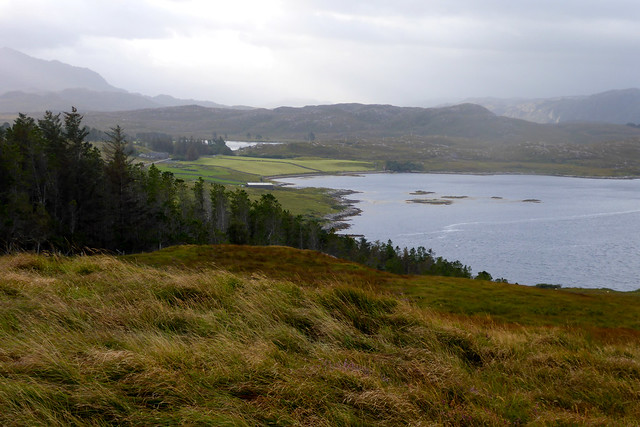 It was with some relief I saw the sign for the Inverewe Gardens ahead. I continued along the road until I was able to turn a path off to the right (part of a walk through the grounds of the estate I think) and follow this down to the car park.

Here I found a bench to sit on and have a rest and some snacks. I was too early for the cafe to be open at the gardens sadly, though the first visitors were just arriving as the gardens were about to open. I didn’t have time to stop for too long though as I had another walk to do later.

So after a nice rest, I then headed back up the road the way I came.

There was little to report on the way back other than a large lorry making me jump. I was walking on the right hand side of the road, facing the traffic on a straight part of the road, as you are meant to do, according to the highway code. The lorry was coming up the road behind me, on the other side of the road. There was nothing coming the other way either, so I was not going to cause the lorry to have slow down or do anything but despite this the drive felt the need to blast the horn at me as he want past, for what purpose I don’t know.

I was glad to reach the car where I then drove on to to the start point of my next walk, but that is for a future write up!