My last walk had turned out to be a very long and demanding one, from Achiltibuie to Ullapool. The last part of that walk had taken me along the A835 which mostly ran along the coast so was the most coastal route to walk.

South of Ardmair, however, the road had gone a bit inland and a minor dead-end road led to the village of Rhue and the maps suggested a path ran from the end of this road to a lighthouse on the coast. Due to the distance covered, energy levels and time I had missed walking along this dead-end road on my last walk, so today I was coming back to fill in that gap.

From the car park I had a wonderful view out to the lighthouse, which I could now see was more a navigation light than a proper lighthouse and beyond that I could see more land on the horizon. 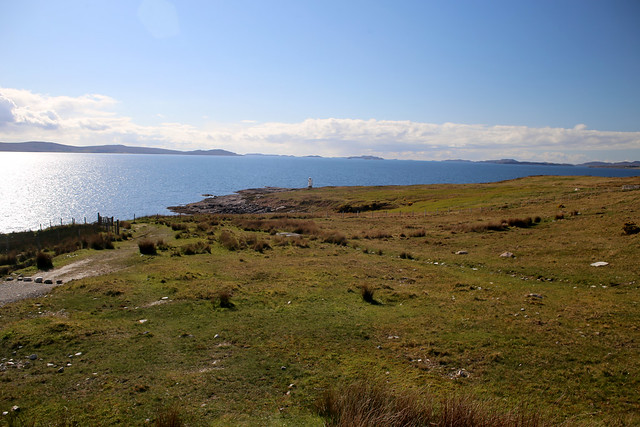 To my right these are some of the Summer Isles whilst to the left, the other side of Loch Broom. I was essentially at mouth of Loch Broom on it’s northern side here.

First I decided to walk on the path out to the lighthouse. This was quite well-walked and passed a small pebble beach (unnamed, on the map anyway) on the left. 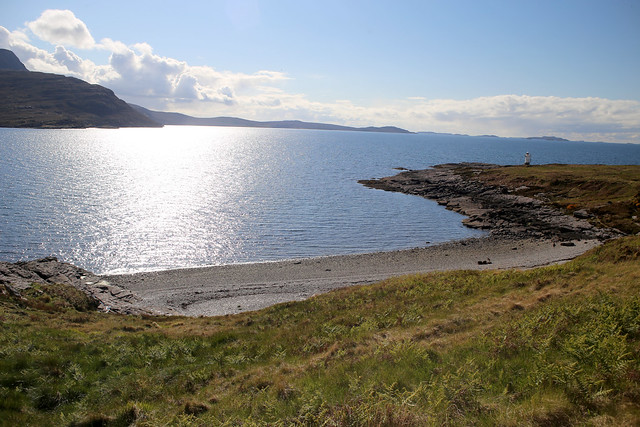 It was a nice looking beach with a small white boat on the grass behind the beach, presumably belonging to the residents of one of the houses. 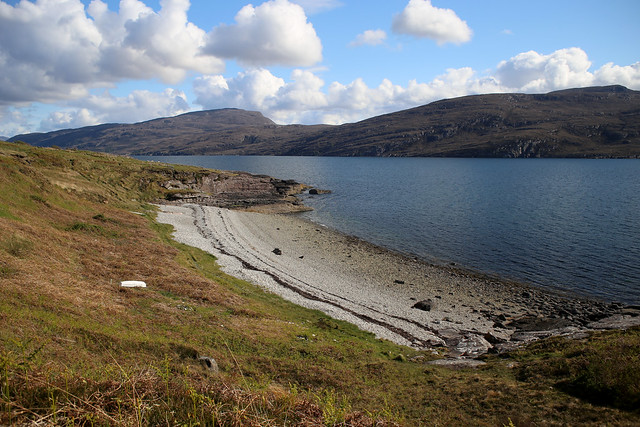 I continued to the end of the path and the lighthouse. Definitely rather functional and more a navigational beacon than a traditional lighthouse (it wasn’t even stripey). 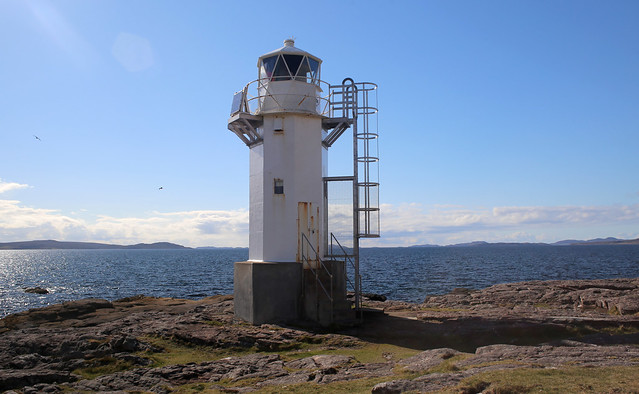 Looking west from here I had a fine view up Loch Broom. Though I couldn’t make out Ullapool I could make out the snow-covered mountains behind the head of the loch. 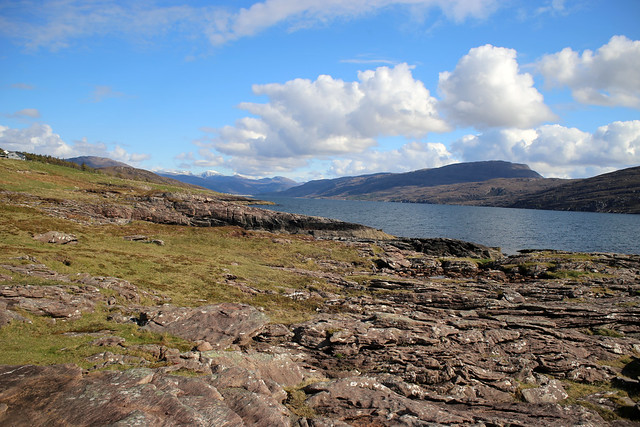 Looking north I had a wonderful view of the hilly terrain I had covered on my previous days walks over the posties path. It looked rather tricky and I was glad I had already done that walk as I suspect looking at this view would have made be rather more apprehensive about it than I was when starting from the other end. 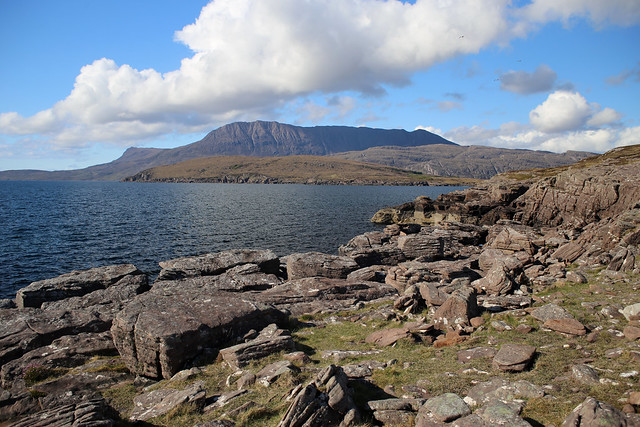 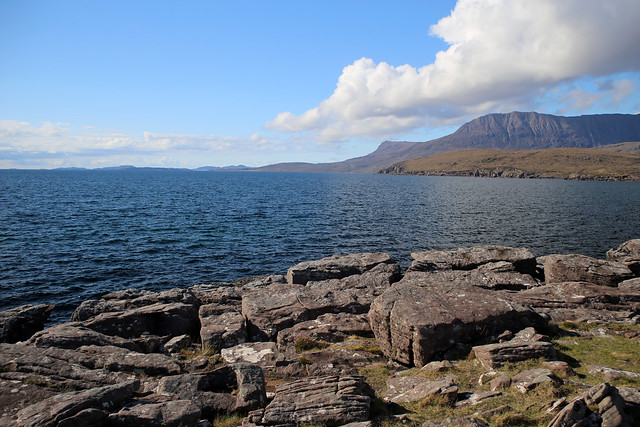 This was a lovely location and I was already very glad I had made the effort to come back to this bit of the coast. Heading back I now followed the path up to the road and continued along the road back inland.

To my right below the road I could make out the ruins of a number of buildings between the road and the shore. Rhue had once been a bigger place. 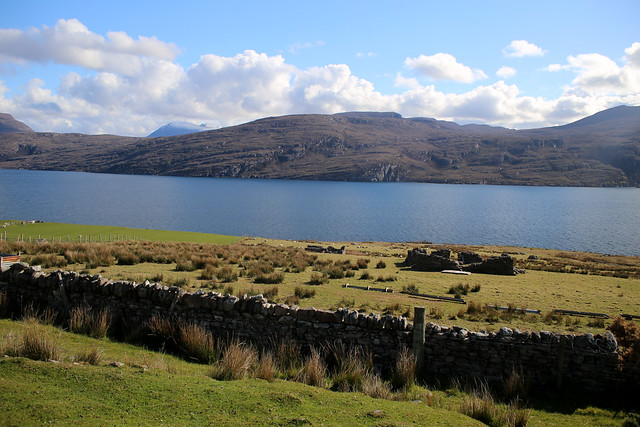 The other side of the loch too looked a little daunting. I was hoping to make a start on rounding the south side of Loch Broom the following day. 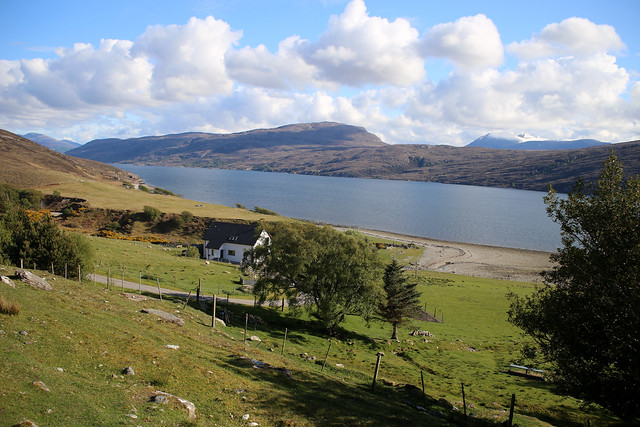 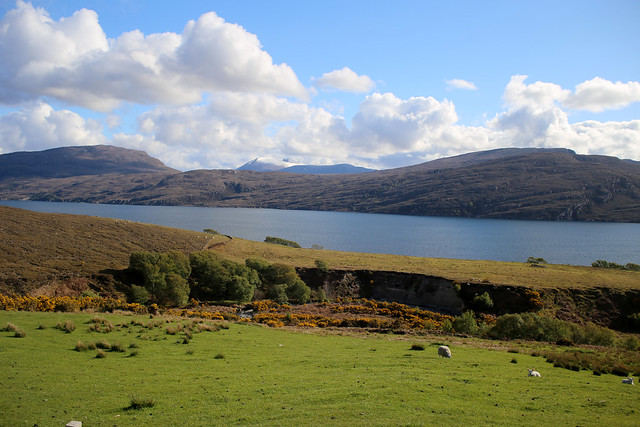 The view inland too was rather lovely with the valley of the Strathan river visible ahead and I could already make out the bridge over it on the A835 ahead, where I was heading. 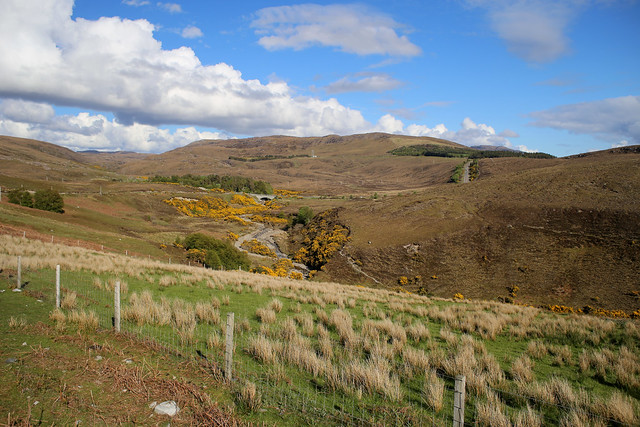 In the other direction the river has cut quite a deep valley out to the coast. 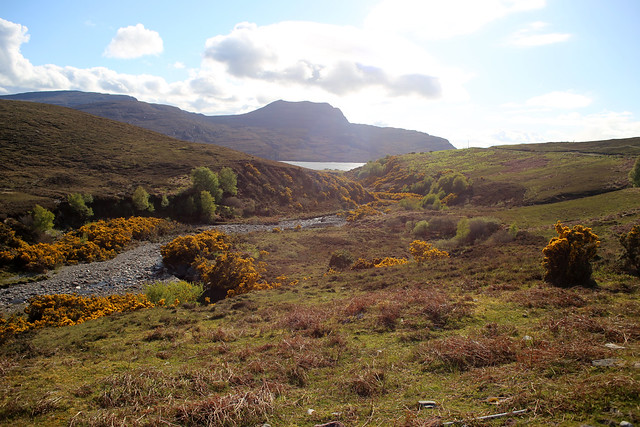 The road soon curved to the left and just ahead I reached the A835. I made a point of stepping onto the A-road to reach the point I had passed the previous day and so closed this small gap. The bridge itself is a rather functional affair, made of concrete I think. 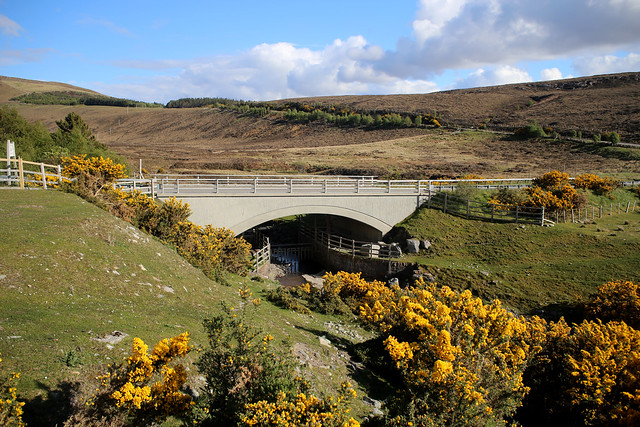 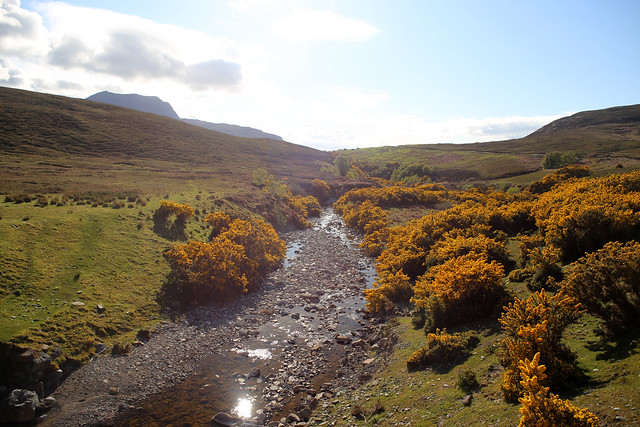 Now it was time to re-trace my steps back to the car at the end of the road. As I headed back up the road I saw something that would soon be a familiar sight on the west coast of Scotland – a CalMac ferry. 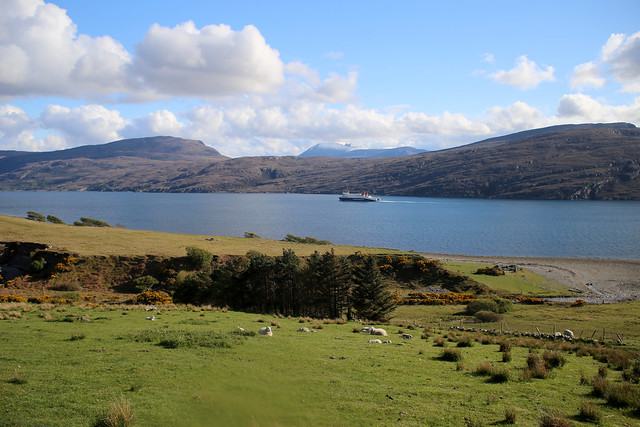 Caledonian MacBrayne (to use their full name) operate the vast majority of ferries in Scotland and along the west coast in particularly there are very many ferries linking to the various islands as well as crossing some lochs, linking two parts of the mainland and providing shorter routes than driving around. In this particular case, this is the MV Loch Seaforth, heading to Ullapool from Stornoway on the Isle of Lewis.

I continued on the road back to the car park where I then drove back to Ullapool where I was staying.

This was only a short walk but I was glad I had made the effort to come back here. The view from the lighthouse at the head of Loch Broom was spectacular both of the coast to the north and south as well as to the Summer Isles out in the open sea and was the highlight but there were also good views throughout on the road, of Loch Broom and inland to the snow-covered mountains, I was surprised to see so much snow still around in May!

Here are details of the public transport for this walk.

There is no public transport along the road to Rhue however there is a bus that stops at the junction with the road to Rhue and the A835 which could be used from Ullapool or Lochinver to access this walk:-

George Rapson Travel route 809 : Ullapool – Strathcanaird – Elphin – Ledmore Junction – Inchnadamph – Lochinver – Achmelvich – Rhicarn – Stoer – Culkein – Clashnessie – Drumbeg. Typically runs twice per day Monday – Saturday. All destinations north of Lochinver to/from Drumbeg are served by request only and only once per day. When heading north just tell the driver. When heading south the bus must be booked by 6pm the previous day by calling 01463 482893 if you are departing from anywhere north of Lochinver. You must ask the driver to alight at the junction with the road to Rhue.