This walk is a short one because I completed it after my visit to Handa Island. As it was still early afternoon when I got back from Handa Island I decided to do a short walk before heading back to Durness.

From my planned walks I was using the (summer-only) bus to do linear walks as far south as Kylesku. After that I’d be following the B869, most of which doesn’t have a bus service so for that part I’d be doing there and back walks.  So I thought I’d fill the gap between Kylesku and the beginning of the B869.

I drove down the coast and parked in the car park at the view point at the south end of the Kylesku bridge (the bus dropped me at the entrance to this before).

An information sign in the car park informed me that a ferry service used to run here, introduced in 1948 with turntable ferries initially, later replaced by a roll-on-roll-off ferry. The ferry, surprisingly, used to be free but only operated during day light hours. If you arrived after the ferry had finished for the day it was a 100 mile drive around, via Lairg. Wow. So over 2 hours driving just to cover 100 metres!

From the end of the car park a pleasant path heads down through woodland beside the loch bring me down beside the old ferry slipway and beside the Kylesku hotel. 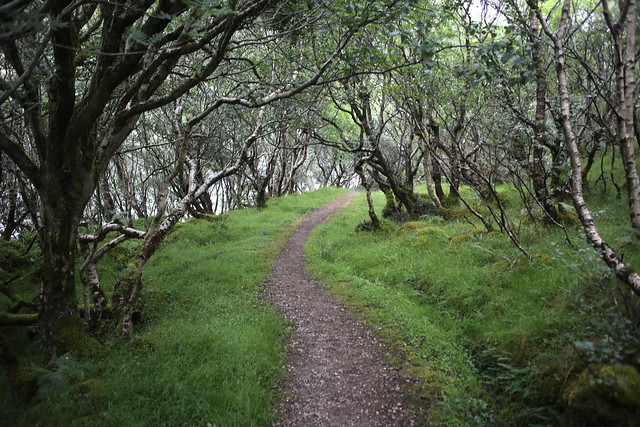 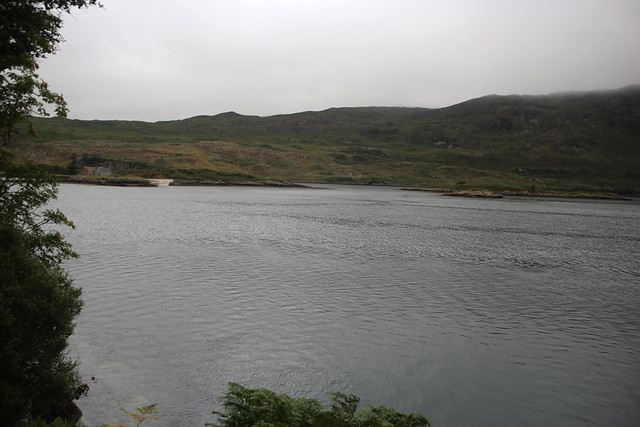 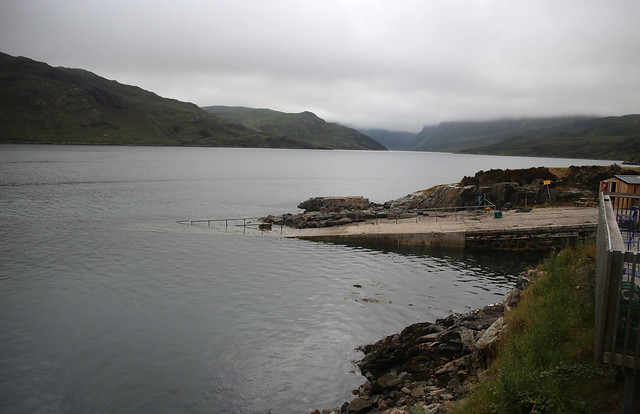 The hotel looked quite nice and outside there was a hut advertising boat trips around the loch to see waterfalls and seals. It sounded nice, however I had missed the last trip of the day so I was not able to do that. I followed the road up past toilets and stopped to admire the view from the car park. It’s a beautiful place despite the mist hanging over the hills. 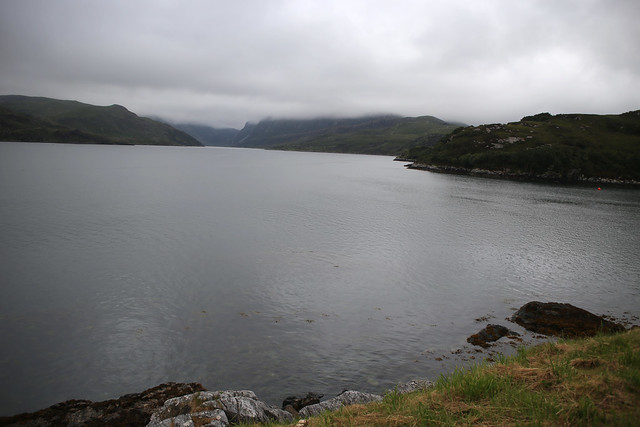 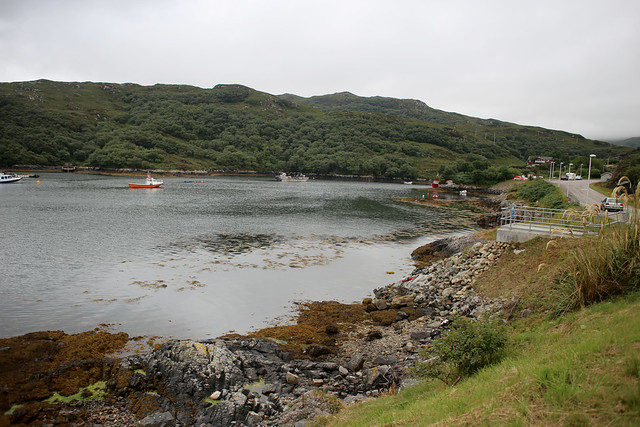 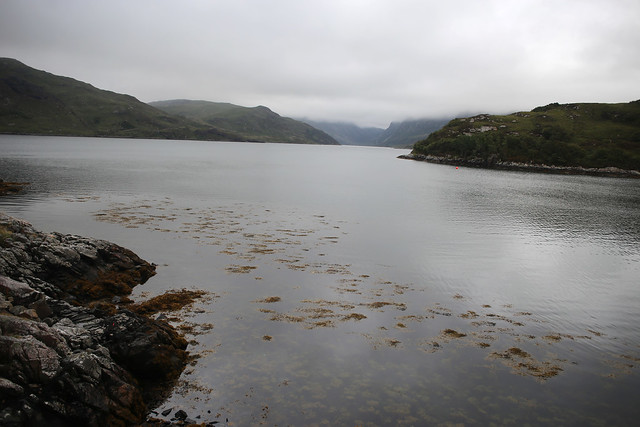 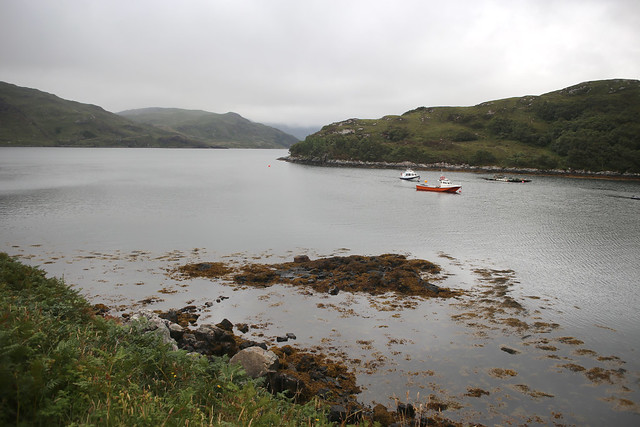 I soon reached the end of this dead-end road which is where the majority of the buildings that make up Kylesku are located. Now I turned left onto the A894 and began following it south. The road here has a lane in each direction (a rarity in this part of Scotland, even for an A-road) which meant the traffic was faster and with no pavement I had to take care.

Right beside the road was pretty Lochan Dubh and a road beside it leading to some self catering lodges. 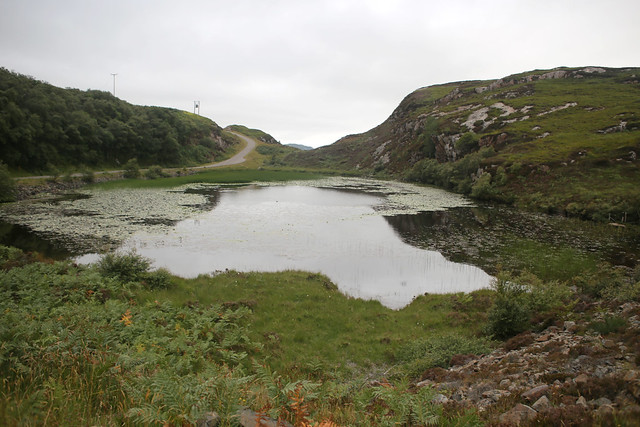 The road now began to climb away from the loch. It was clear that had been a lot of engineering to build this road, as the rock either side had been cut away to create the road.

As I reached the top and the road began to level out I reached the tiny village of Unapool (not to be confused with Ullapool … I wonder how many make that mistake in their SatNav!). The view from the road at the top of the village is lovely though the number of ruined buildings I can see above the beach suggests it was once larger (perhaps fishermans cottages?). 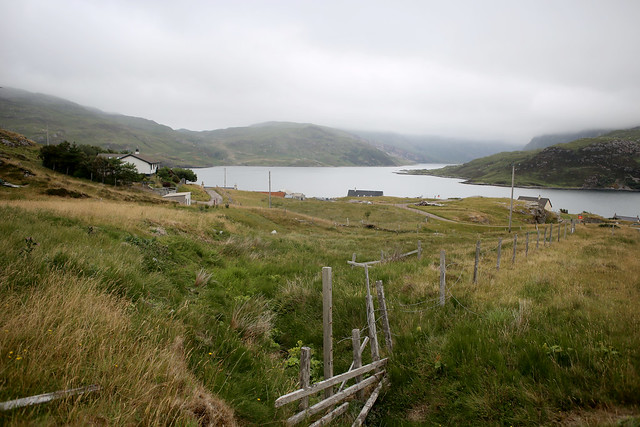 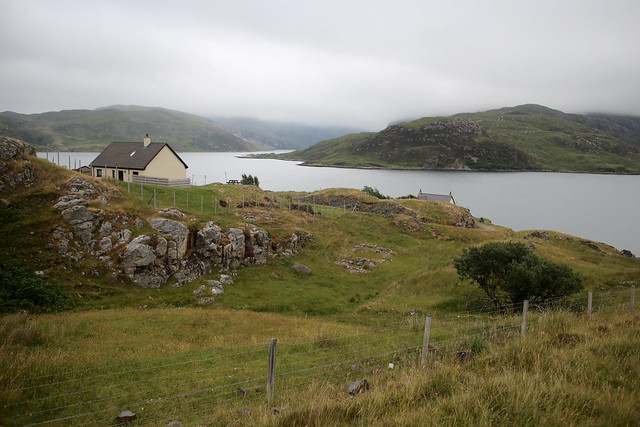 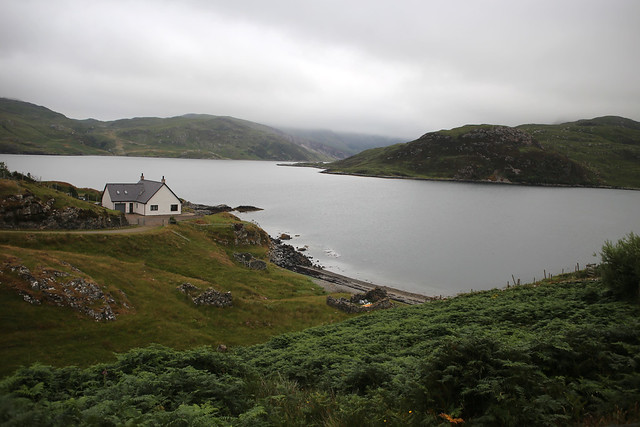 Despite it’s small size the place boasts a rock shop and museum. Just above the rock shop a little parking area gave me a better view down to the water of Loch Glencoul and I could see new trees had been planted on the headland just below the road. 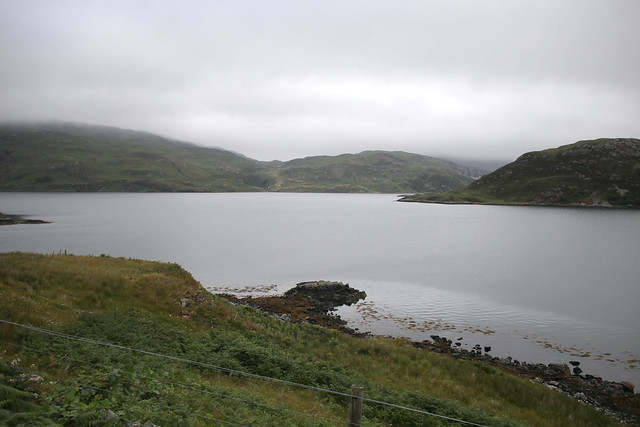 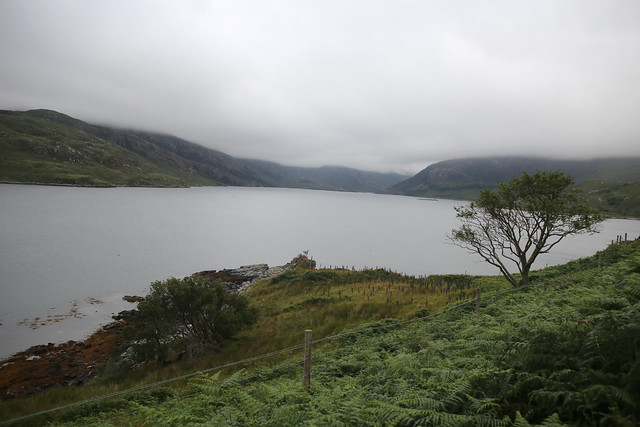 This isn’t actually the open sea here. This is the water that flows under the Kylesku bridge, so i’m facing a sort of inland coast! 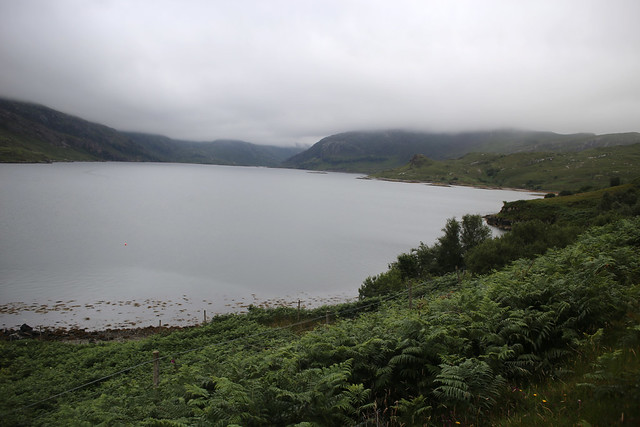 The road now rounds the corner and soon passes an old quarry on the right. It’s clearly not being used for a long time but the cliff face is scarred by the historic quarrying. Rounding the next bend I can now see another tiny settlement below the road. This is Newton. There are only 4 or 5 houses here so it’s a hamlet.

Looking up Loch Glencoul I can see a few little islands. It’s a pretty place and it would be nice to take the boat trip around it. 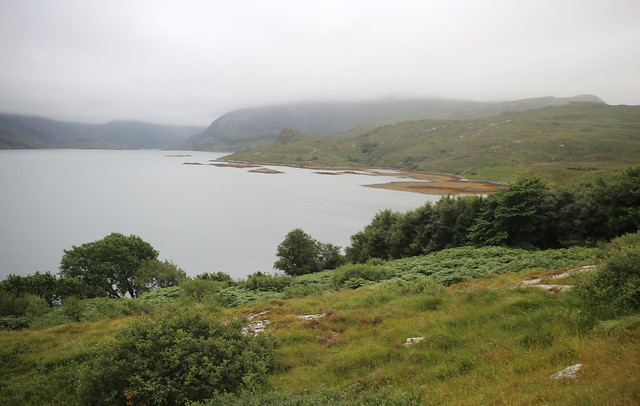 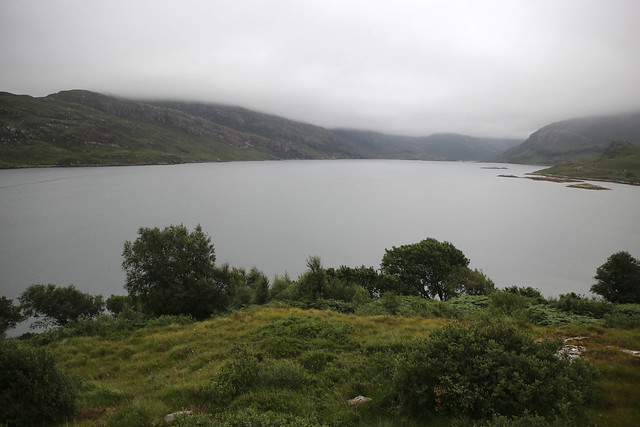 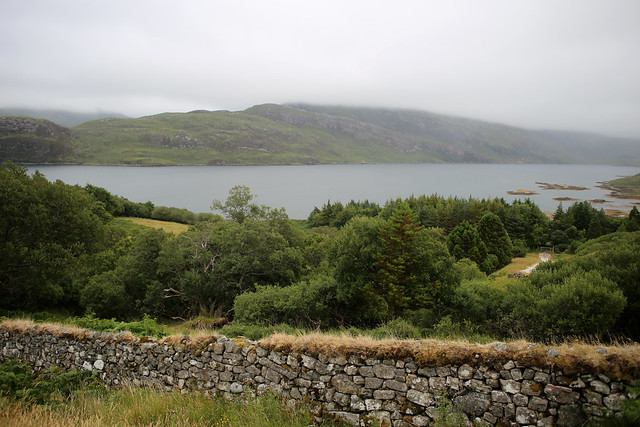 A short distance ahead I come to a parking area with an information sign. I still have about 500 metres to go before the start of the B869. I intended to walk as far as that, but places to park are not so easy to find in this part of Scotland so I decide to make this my “turn back” point instead because I know I will be able to park here, without obstructing the road, next time.

However first I have some business to attend to. A bench is located beside the layby with the words “please take the time to sit and enjoy the view stop” carved into it. I feel I must oblige. It is indeed a lovely view – but also a little chilly to be hanging around for too long. 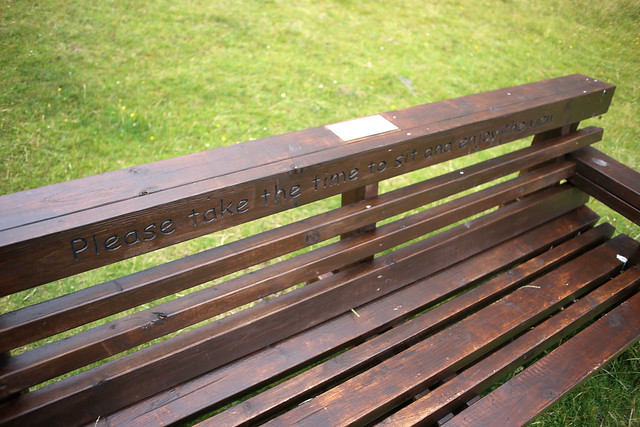 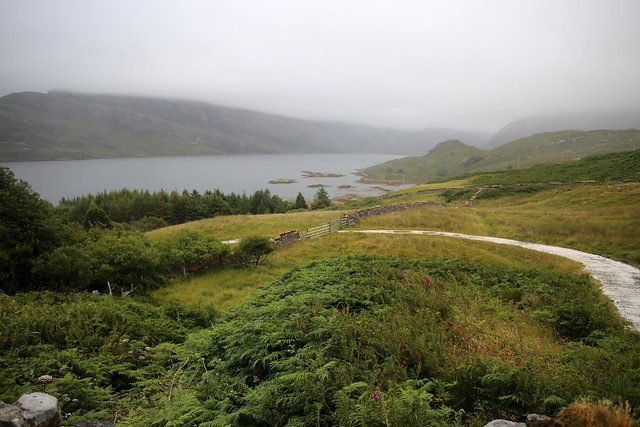 Unfortunately a shower blows in and I quickly decide that it’s time to leave! It’s a rather wet walk back to the car at Kylesku.

Here are details of the public transport needed for this walk, if you prefer not to walk there and back.

Durness bus route 804 : Kinlochbervie – Rhiconich – Laxford Bridge – Scourie – Kylesku – Unapool – Skaig Bridge – Lochinver (for connection to/from Ullapool). One bus per day each way, Tuesday and Thursday only, from May to end of October only.

This entry was posted in Sutherland and tagged Coast, Kylesku, Newton, Sutherland, Unapool. Bookmark the permalink.