The latest underhand tricks of the travel industry

In September last year I planned and booked a trip to the Highlands of Scotland to continue my coastal walk in 2020.

I booked a flight to depart from London Luton to Inverness with Easyjet on the 8th July 2020, along with 5 days car hire with Europcar. The flight was due to depart at 9:40 and arrive at 11:10. On the same date I then booked a flight back from Inverness to London Heathrow with British Airways to return on the 12th July 2020 departing at 20:15 and arriving to London at 21:40. I specifically booked this late departure so I could get a full days walking in on the last date. I booked so far in advance because accommodation in the highlands of Scotland gets booked up so far in advance and for the summer period you need to book well over 6 months in advance to find anywhere to stay. I also booked a hotel at the same time.

3 weeks after booking, I received an email from British Airways informing me that the times of the flight had been changed from a 20:15 departure to 15:55. 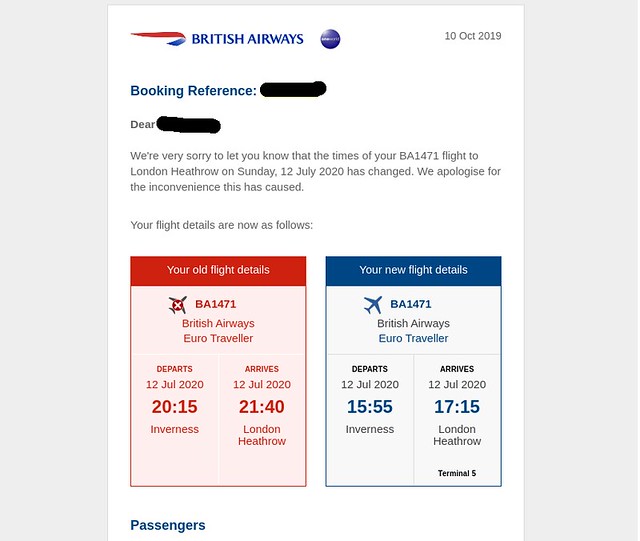 With the need to arrive around 2 hours before the flight and drive to Inverness from the west coast of Scotland, that would blow my plans to do much walking on the last day. This sort of thing irritates me intently. Airlines make clear that when you book you cannot change the date or times of the flight without paying a £60 admin fee and any difference in fare. But if the airline changes it, well that’s just tough. A telephone call to British Airways confirmed that they were not running any later flights so I took the option of a refund as the change was more than 3 hours. (Of course I should have learnt that it seems to me to be almost standard policy of British Airways to re-schedule flights after selling tickets for them, as I’ve commented before).

Instead I booked an alternative flight with Easyjet departing at 20:55 and arrive (allegedly) at 22:15, to London Luton. I had been avoiding this flight having used it in previous years, because on all occasions I have used it, it has been very late (often more than 1 hour) and given I’m meant to be working the next day I don’t want to get back home at gone 1am(!), as would be the case by the time I’d got out of the airport, the bus to the car park and driven home. I had used the British Airways flight for my last trip in 2019 and it worked quite well, but sadly that option had now gone.

Now with the current Covid situation the problems with companies in the travel industry trying to evade making refunds are well documented. I suppose it was no surprise I’m facing similar problems with Easyjet, which is a real pain as I’d previously praised them on this blog for handling a previous cancellation so well. How times have changed.

Fast forward to 26th June 2020 and I received an email from Easyjet entitled “Important changes to your upcoming flight booking”. I thought it was rather outrageous. 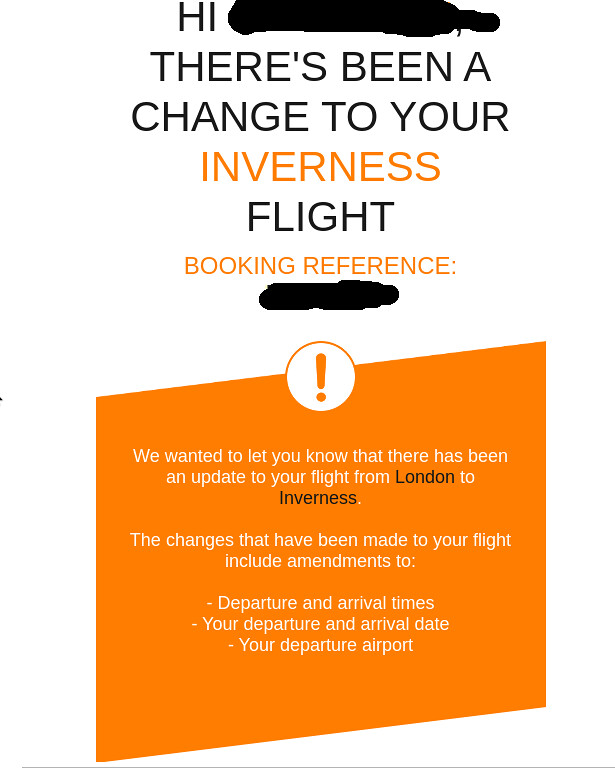 Apparently the changes were to the departure and arrival times, departure and arrival date and departure airport. In looking into it turns out Easyjet had “amended” my booking so that I was now going to be departing from London Gatwick airport (rather than Luton), a day later (on the 9th July) and at a different time. In addition the flight number was different and it was clear from their website that they were no longer running any flights from Luton to Inverness.

The cancellation was not entirely a surprise because accommodation in Scotland did not re-open until the 15th July 2020. So if I had gone to Inverness I’d have nowhere to stay anyway (and how frustrating that I’d not booked it for a week later back in September or I might actually have been allowed to go…)

However what annoyed me was trying to dress up what was clearly a cancellation as an amendment. The Civil Aviation authority is clear that if the flight number has changed (as it has) it’s a cancellation and not an amendment (no matter what the airline says) and in this case passengers are entitled to either a refund or a change of flights, and can also claim for additional expenses, such as overnight stays if choosing a different flight. To quote

What are my options?

If your cancelled short-haul flight is covered by EU law, your airline must let you choose between two options:

However the email from Easyjet didn’t offer the option of a refund. Nor did it mention anything about a refund for the car hire that was supposed to start on the 8th July even though the flight was now not getting there until the 9th. It’s also clear the airline must allow me to choose an alternative flight – not choose one for me without asking and then provide no option to change it! If I looked into the website my flight simply showed as if I’d booked the flight from Gatwick in the first place (rather than the one I actually booked) and only provided the option to check in, not “Manage Disruption”, as is the case if the flight is cancelled. Instead if I was “not happy” (which I wasn’t) these are the options. 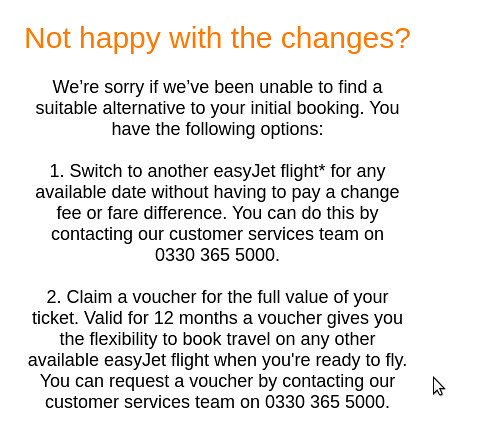 You see – no mention of a refund (only a voucher) and which ever option I choose, I have to telephone them to make the change. Unfortunately if you try to call EasyJet usually you will get a message that they are very busy and then the message “to save you queuing for a long time, please call back later” and the call cuts off! I tried calling at different times of day but mostly got this message or another that they were operating reduced hours and now closed. On a few occasions I was able to get into a queue but after more than 1 hour of the call not being answered (and no indication of how long the wait is) I had to give up. Instead I sent an email explaining I didn’t accept the change and also filled in a form I found on their website for refunds to cancelled flights and if you scroll past all the “Please take a voucher instead” you find the form. So I filled that in.

I suppose I shouldn’t be surprised, but a couple of days ago I got this email.

Thank you for contacting easyJet and for submitting your refund request.

I’m sorry but as your flight has not been cancelled, you are not eligible for a refund.

Well that’s charming isn’t it? Of course the flight I actually booked had been cancelled even if the one they had moved me to had not been. However it seems to me that what Easyjet are doing is simply cancelling most flights to Inverness (and probably other destinations) and moving all bookings for the cancelled flights to the small number of flights that are still operating and then claiming that the flight is not cancelled but “amended”. Even if that means a change in date and even airport as in my case! Then making it impossible to contact them on the only way they say it’s possible to, in order to make a change or request a refund. I understand they will be busy.  However they have put thousands of staff on the Government furlough scheme. So clearly they do have enough staff to answer the phone if the staff on furlough were working (and I can’t imagine training staff to answer the telephone and give refunds if that is not their normal job is going to take long) but are choosing to keep them “off the books” so their salaries can be paid for by the Government instead.

However I do think this is an appalling way to act and Easyjet are determined to try and hang on to my money even though they didn’t provide the service I had already paid for. Though I haven’t personally experienced it, I’ve also heard that the offer of a voucher is very misleading because if you take a voucher they don’t let you pay (either wholly or partly) for a flight using the voucher on their website. Instead you must telephone to make the booking. And if you make a booking by telephone rather than online, their is an admin fee (hence effectively reducing the value of the voucher by this admin fee).

4 Responses to The latest underhand tricks of the travel industry