A fun bank holiday weekend ….. or not

This coming bank holiday I had a fun project planned. Whilst most of Southern England was probably going to try and fit themselves all on to Brighton beach, I was going to use the 3-day weekend to walk the entire coastline of another country.

The nearest bit of coastline to my home that I’ve not yet walked is in France. However France has quite a long coast line (and it has two coastlines) so that wasn’t going to be possible in a weekend. But next to France is Belgium. This was my planned destination for the weekend. I was going to walk the entire coastline of Belgium.

The coast of Belgium is around 70 kilometres long and almost entirely flat so that means walking a little over 20km a day over 3 days, a comfortable distance to manage, even allowing for the time to get there.

It should be easy to plan to. A tramway runs almost the entire length of the Belgium coast, for 67km, making it the longest tram system in service in the world with 67 stops on the way. That meant that more or less whenever I had had enough for the day I could get on a tram and travel back to the hotel I’d booked in Ostend, roughly mid-way along the coast. Checking maps, there were footpaths, promenades or tracks pretty much the entire coast (often next to the tram) so it should be quite a straightforward walk.

So back in November I booked a return ticket on Eurostar from London to “Any Belgium station”. It should take only 2 hours to get from London to Brussels on Eurostar, where I could change onto a train to various points along the coast and get started. It is by far the quickest and simplest way to get to Belgium. 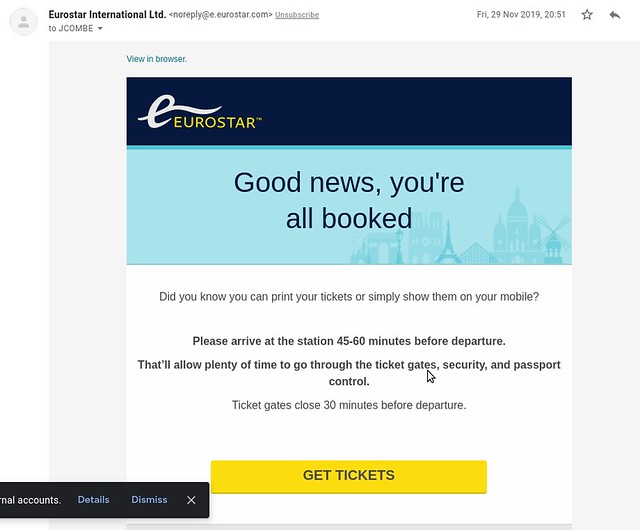 I also booked a hotel in Ostend. 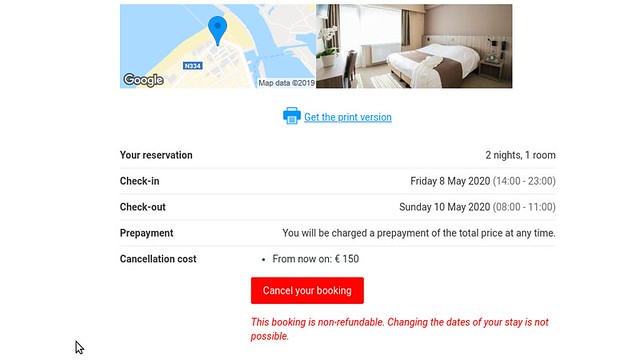 What could possibly go wrong?

Well of course it has gone wrong. Rather then be packing ready for my trip to Belgium I’m stuck at home writing this because in Britain fun is not allowed any more, and that includes going on holiday. So I won’t be going to Belgium. Or in fact anywhere. It will be another weekend stuck at home.

Who knows when I’ll be allowed to go to Belgium again. The UK Government is advising against all overseas travel. Belgium is not admitting non-residents. The train I booked is cancelled. The hotel I booked is closed.

Despite these last two statements, that hasn’t made getting my money back any easier. The Eurostar website is insistent that if you can’t or don’t want to travel you can have an “eVoucher” – but you can’t have a refund. That’s not good to me because who knows when we will be allowed to travel to Belgium again? And when we are will you now have to go into quarantine for 2 weeks when you arrive and the same on the way back? That will hardly make it an enjoyable trip or worthwhile trip. In fact the Eurostar website goes further and tells you that “many travel insurance policies will not cover claims or financial losses related to epidemics or pandemics” to add further weight to the fact they really really want you to have a voucher. That statement might be true but it’s also misleading (and I suspect deliberately so). Most travel insurance policies will however cover you if after making a booking the Government changes to advise against travel to a country you have booked to travel to – which is the case with Belgium (and France). So in fact most travel insurance policies WILL still cover you in this scenario. Another issue is that if you accept a voucher that will be it. If you can’t use the voucher you won’t be able to make a claim on your insurance because you will have been deemed to have accepted the solution of a voucher (even if you later cannot use it).

Fortunately, buried away in the Eurostar terms and conditions is a statement that if the train you are booked on is cancelled and this causes a delay of 1 hour or more, you are entitled to a refund. Eurostar are now running just a single daily service from London to Brussels (less than 10% of the usual service) so you’d have to be pretty unlucky to have booked on the only train that is still running. Fortunately my luck was in in that regard as earlier today I had a notification from Eurostar and clicking the links confirmed the train I was booked onto was cancelled. 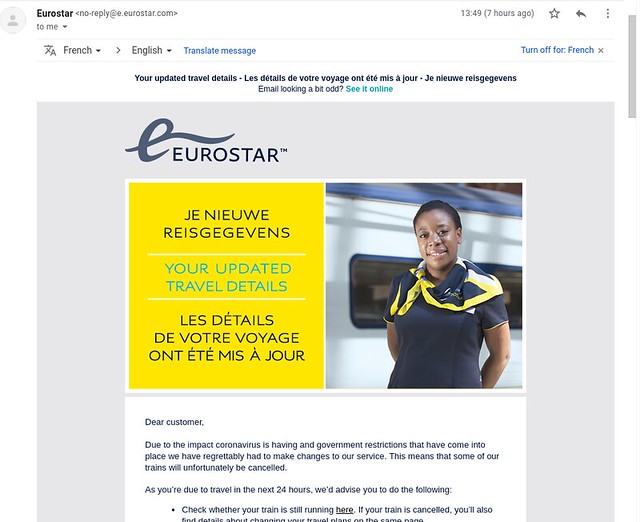 As expected my train was cancelled. Eventually I did manage to get through on the phone having ignored the recorded announcement that if you want a refund you should go to Eurostar.com to request a voucher (which isn’t a refund) and that the website was the only place it was possible to get a refund (it isn’t). Thankfully when I did get through to a person I asked for a refund, was offered a voucher and explained I didn’t want a voucher I wanted a refund because the train was cancelled. Thankfully they were happy to do this (without me needing to quote from their own terms and conditions) and I was told the refund would be in my account in 10-15 days. I hope this is the case!

Next the hotel. As you might see above my booking was flagged as “Non Refundable”. I don’t mind that – I never cancel holidays. What I hadn’t expected was that in the intervening months the Government would tell me I’m not allowed to go on holiday. So I contacted the hotel to request a refund but got the response.

Good morning, Thank you for your email. Unfortunately, we cannot refund a non-refundable booking.

To be fair they did also go on to offer a voucher but again, not knowing when I will be able to travel and if the voucher will even cover the cost of a future booking (a lot of places are putting prices for later this year or next year up). Further enquiries confirmed my suspicions. The hotel wasn’t actually open! Nor was it going to be on the dates I was due to be staying there. So when I explained that although it was not a refundable booking, if they were not able to provide the service I had paid for that doesn’t mean they can still keep the money I had paid. I suspect knowing if they refused again I’d raise a dispute with my credit card company on the basis the service paid for wasn’t provided, this time the response was in my favour and the refund was promised (and has since been made).

So really it’s doubly frustrating. Not only can I not go, it takes a lot of time and effort to get a refund for services paid for in advance that now aren’t being provided. I understand how hard this is for the travel industry too – but it’s not fair to try to hold onto customers money when you are (through no fault of your own admittedly) unable to provide the service that they have already paid for. I don’t think businesses do themselves any favours when acting in this manner. If you want customers to come back to you, treat them fairly. If you make things hard for people, they will remember it in future!

10 Responses to A fun bank holiday weekend ….. or not