Special: The most northerly coast (part 5 of 5) – Longyearbyen and home

Last weekend I should have returned from my 2nd planned trip of 2020 to the Scottish coast to continue my coast walk, this time on the coast of Ayrshire. However we are not allowed to go on holiday anymore and this makes me sad. I also now have to try and get hold of the evasive British Airways to try and get my money back from the cancelled flights, which is more stress I could do without (the website only offers a voucher, you have to telephone for a refund and they never answer the phone, just play a recorded message that they are too busy and cut you off).  At least the hotel I was due to stay at had no qualms about cancelling my booking and hadn’t asked me to pre-pay.

So instead I thought I’d cheer myself up by writing up the last day of my trip to Svalbard back in summer 2018, though it’s a short one as I only had a few hours before I had to leave.

Today was a sad day because it was my last day in Svalbard and I had to head home later in the day. Still it had been a fantastic trip that had far exceeded my expectations and I’d love to come back, so at least I was ending on a high.

My first of two flights to get me home was at 13:25 so I only really had (most) of the morning to explore, given I also needed to get a bus from the town to the airport (they are timed to connect with the flights).

I headed to breakfast and was pleased to be able to get one of the window tables this morning, for the first time, so I could enjoy the stunning views (this time up close) for the last time. I had some entertainment to watch as some reindeer were grazing on the scrubby grass just below the window – not something you’d see in many places.

After breakfast I packed up my stuff and asked if I could leave my suitcase in the hotel. To my surprise I was told the luggage room was already full but they didn’t mind me leaving my bag in the lobby area where the shoe racks are (as it’s a custom to take off your shoes when entering buildings in Svalbard shoe racks are usually found by the doors). This was at my own risk but it seemed unlikely there was much crime in this part of the world, especially for a suitcase full of dirty clothes!

Now I had a few hours to wander around Longyearbyen. I was able to marvel at traffic, Svalbard style! 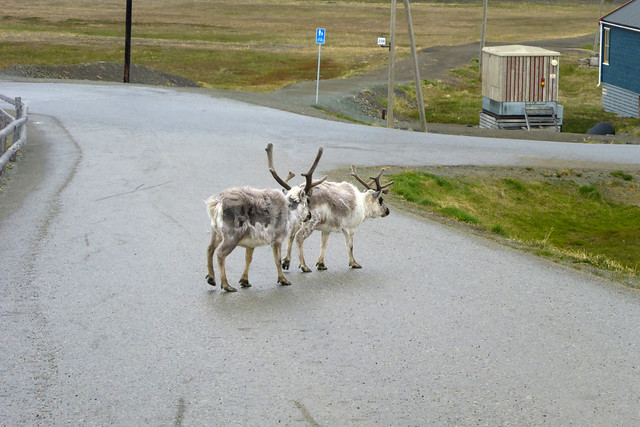 Once across the road the reindeer settled in to munching the longer grass on the slope down from the road. 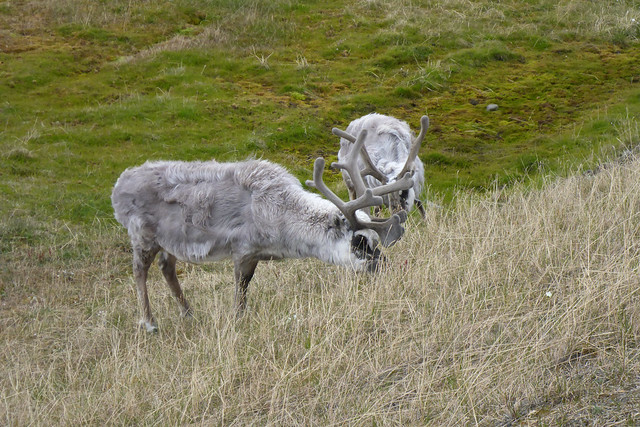 Here is the view back to the hotel, the room with the raised roof and large window is the restaurant where I had breakfast and was watching the same reindeer from inside a few minutes ago. 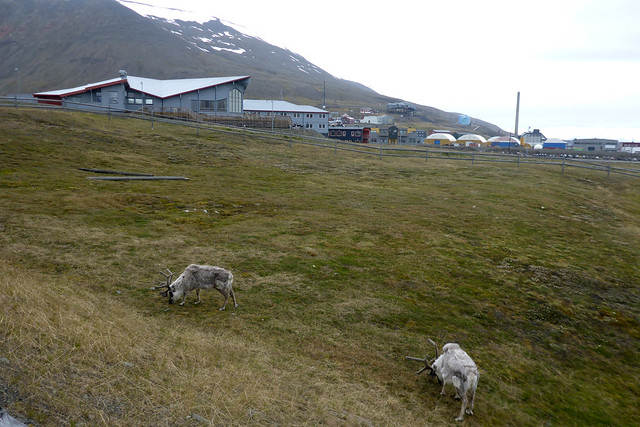 I guess reindeer wandering around the town is a common occurrence because none of the locals gave them a second glance – unlike the tourists. 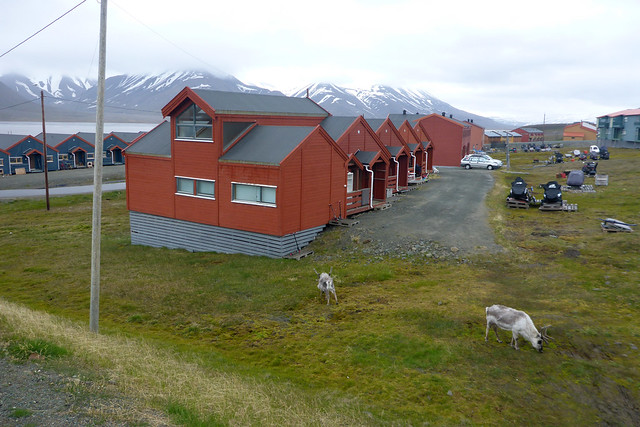 I also wandered down to the water front for the last time and then back up to the main shopping and bar area.

I didn’t have time on my last day to book any trips so the town was actually quite quiet. Most people that stay here book on excursions each day which had already left. It was too early for the first new arrivals and most locals would already be at work, so there weren’t many people about. Even the Svalbar was quiet. 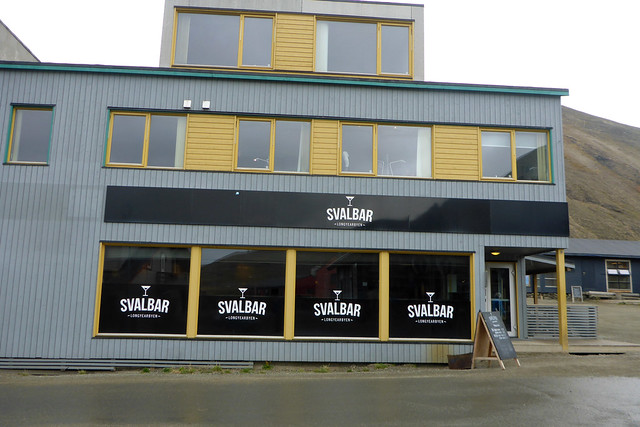 The weather today was cloudy so really the photos I have already shared on previous posts show the town in better conditions, so I won’t add lots more of the same today.

I did stop to buy a few souvenirs and presents too before I had to head back to the hotel to retrieve my luggage and wait for the bus to the airport. The bus arrived a couple of minutes late and soon headed on to the short drive to the airport.

The airport is small, with only 3-4 flights each day in the summer so it does not take long to clear security or passport checks. Once through that I had time to get some lunch and soon could watch the aircraft arrive that would take me on the first leg of my journey home and then pull up at the gate. 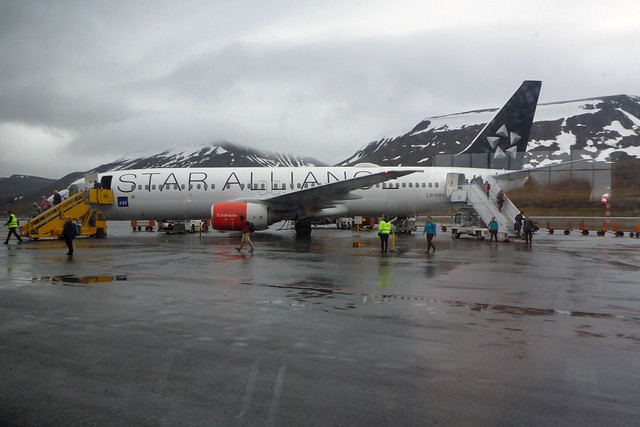 Soon we were called for boarding and the flight back was a lot busier than the one I had arrived on, but I had selected a window seat again, which was nice (SAS do not charge for choosing seats at check in).

Sadly it was now time to depart. We lined up at the end of the runway and soon headed into the cloudy skies.

Here is my last view of Isfjorden just before we disappeared into the clouds. 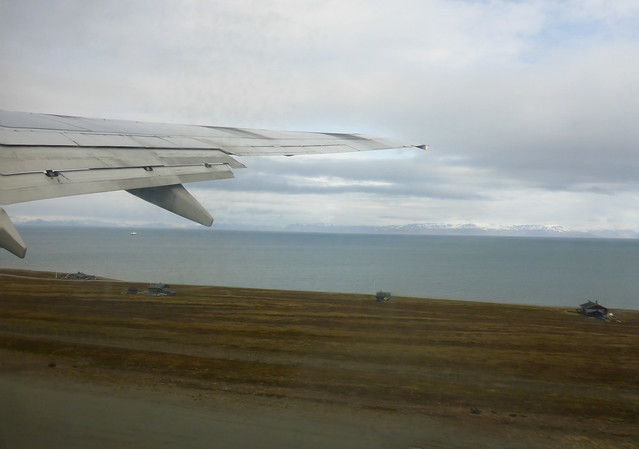 Sadly the clouds meant on the way back there weren’t the stunning views I was treated to on arrival. This time the flight back was non-stop to Oslo (it had stopped in Tromsø on the way here) and it wasn’t until we were over the mainland of Norway that the cloud broke enough to see to the ground again, where a landscape of Fjords and forest could be seen. 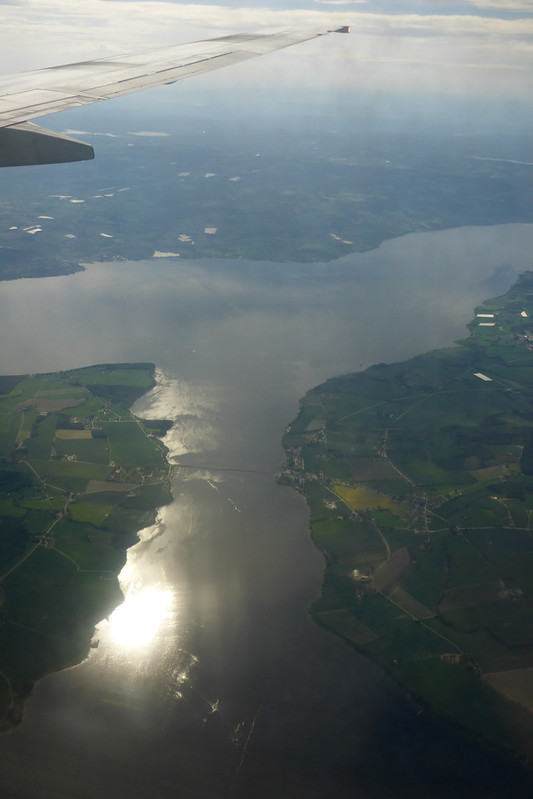 We arrived in Oslo on time and got quite a shock when exiting the plane. Oslo was experiencing something of a heatwave. The temperature outside was 28 degrees Celsius. Or nearly 25 degrees hotter than it was in Svalbard, so it felt a bit odd to be getting off with thick coats and hats when everyone else was dressed for summer!

I didn’t have time to linger though and I was glad we had arrived on time because my onward flight to London was only 50 minutes later (it was booked as a through ticket). Fortunately that turned out to be enough time for both me and my luggage to make the connection and soon I was on my 2nd flight back to London. It was a rather unwelcome change to back in this noisy and crowded city after returning from one of the remotest and most beautiful parts of the world, and it was a bit of a culture shock.

Once I’d had my passport checked and collected my luggage I took a National Express coach to my local rail station and a bus back from there. It was a shame my adventure was over, but at least the journey home had gone smoothly.

So that was the end of my trip to Svalbard. I’d love to go back and I do hope I will be able to, I want to see Pyramiden too and perhaps stay at Isfjord Radio for a time too. Maybe I will go in the spring when it’s starting to get light, there is more snow around and perhaps the chance to see the Northern Lights. I hope, with the current situation, I will get the opportunity to visit again in future but at least I can take comfort from the fact I did manage to get there – few people make it to such remote parts and I’m not sure when It will be possible to again.

Here are the complete set of photos I have of Longyearbyen : Main Link

This entry was posted in Special and tagged Longyearbyen, Norway, Spitsbergen, Svalbard. Bookmark the permalink.

2 Responses to Special: The most northerly coast (part 5 of 5) – Longyearbyen and home