At the time of writing I should be out walking the coastline of Argyll and Bute on my first coast walking trip of 2020.  However I’m not, I’m stuck at home because the government has decreed were not allowed to travel anywhere, go walking away from home or leave the house unless absolutely necessary (and even more depressingly, there seems to be no end in sight, so it’s impossible to even plan anything for the future, either).

However here is my rather crude map of progress to date (as it was in late 2019) with the bits highlighted in red being the parts I have walked. 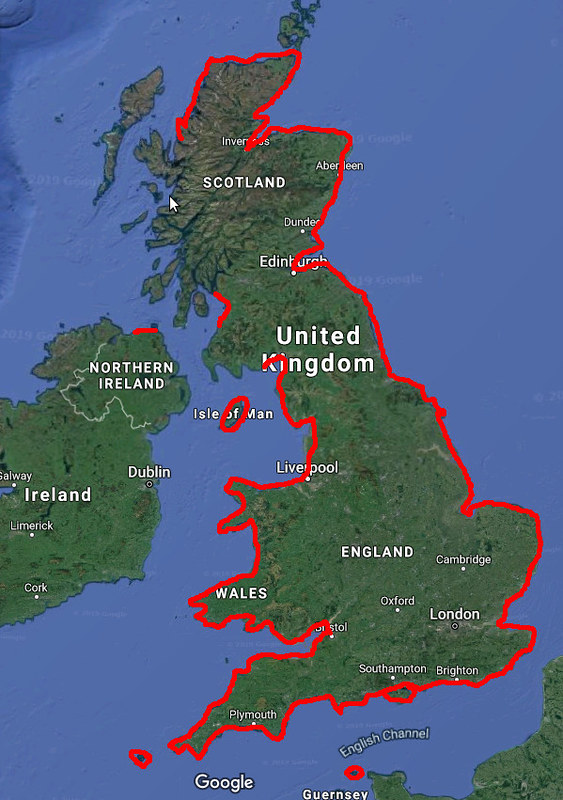 In 2019 I covered the coast of the Scottish Highlands from Lochinver in the north to Lower Diabaig in the south. I also made a start on the Ayrshire coast as I could just about do trips up to there for the weekend. I covered the section between Gourock and Maidens. Lastly I crossed the Irish Sea and walked the Causeway Coast Way, a 33 mile walk covering some of the best coastal scenery in Northern Ireland, including the famous Giant’s Causeway. (That does leave the question as to whether I’ll do the rest of Northern Ireland, a question I haven’t yet answered).

I think it’s now obvious I will be making far less progress in 2020 (and possibly none at all). My first trip, supposed to start yesterday is already cancelled. The hotel I booked and pre-paid for (Premier Inn Greenock) did contact me and tell me I could now cancel and obtain a full refund, despite booking a non-refundable “saver” rate. Well done Premier Inn (though in the end they later contacted me to tell me the hotel was now closed anyway, so they would have had to refund me in the end). Sadly the same could not be said for British Airways who insisted that the flights I was booked on are still running (even though I’m not permitted to take them – they must be running almost or entirely empty?) and so I could only have a voucher (which I’m still waiting for) to the value of the flights instead, to use against a future booking – so I am already out of pocket.

My second trip (booked and paid for already) was due to be late April. That too is now cancelled because the hotel is closed to all but key workers until at least the end of April (this time I was not due to pay until arrival anyway, so could cancel without cost) and this time the flights have also already been cancelled (though that does at least mean I can get an actual refund, rather than just a voucher).

My next trip is booked for May and also looking very doubtful. 2020 looks to be a write-off and I feel like this year has been stolen from me – forced instead to spend most of it under what is virtually house-arrest (something I never thought would or could happen in Britain if you haven’t committed a crime and been charged with it).

18 Responses to Progress to date