For this walk I was staying at the Travelodge in Berwick-upon-Tweed and had been walking some of the Northumberland coast on this trip. Today was my last day and I had planned to take another walk along the coast in Northumberland, but the weather forecast was for heavy rain and gale force winds until late afternoon. I hoped to give it a try but the walk from my hotel to the station in Berwick was seriously unpleasant, so I decided a walk really wasn’t going to be possible today (or at least, if it was possible it wouldn’t be enjoyable, which was the point). So I decided to go to Edinburgh instead (there is always plenty tod o there) and so now I was at the station took the train to Edinburgh, which takes around 50 minutes.

On this visit I visited the Royal Yacht Britannia in the morning, which is now based in the city. I wrote a bit about that in a previous entry, so I won’t repeat it all again but suffice to say it is a good trip which I thoroughly recommend as there is a lot of interest to see.

Whilst I was going round the yacht I noticed the rain had stopped and there was also brighter skies coming over. It looked like a short walk would be possible, after all. So I decided to head to North Queensferry to cross the Forth Road Bridge.

This is because I had previously walked the Fife Coast Path from North Queensferry north to Dundee so decided it would be good to continue south from North Queensferry. There was another reason I wanted to do this too. I had been to South Queensferry earlier in the year and seen the new Forth road bridge under construction (now opened and called the Queensferry Crossing). The fate of the old one (the Forth Road Bridge) was as yet undecided but since it had a footpath on it and the new one does not it made sense to cross the old bridge, whilst I still could. However if it does eventually close entirely (as predicted) that means the nearest route for pedestrians is many miles further upstream near Falkirk.

I took the train to North Queensferry which arrived almost on time and I followed the Fife coast path signs down from the station to the waterfront, which was an easy walk, being downhill all the way. 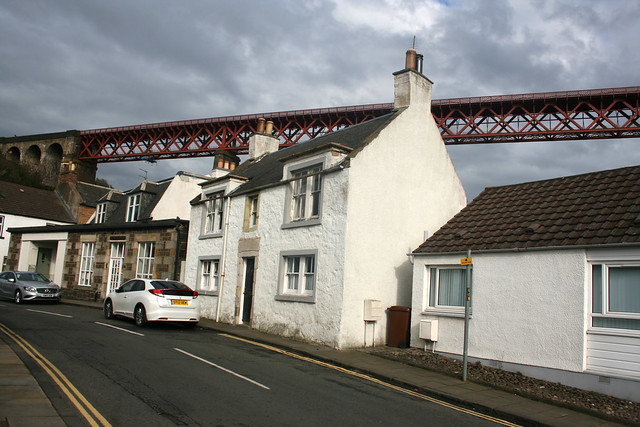 I like North Queensferry, it has many pretty buildings and a fine view of the Forth Rail Bridge, something I had just crossed on the train, but could be even better appreciated from below as it is just such a vast structure and very beautiful. 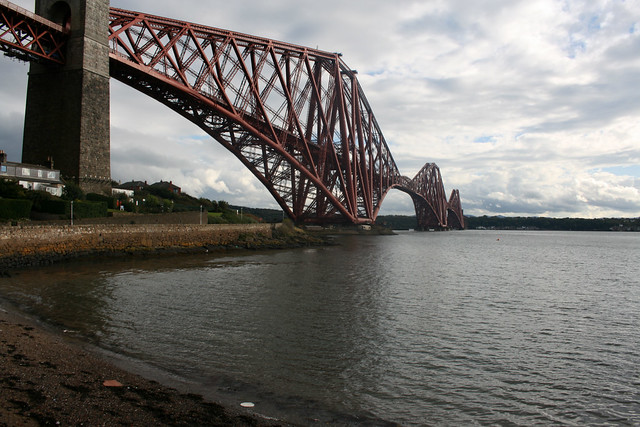 Once I’d had a view of the bridge, I followed the Fife Coast Path signs as best I could heading up hill towards the road bridge. 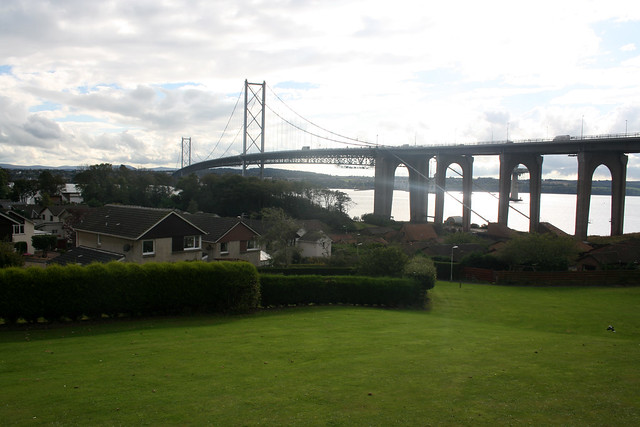 More by luck than judgement I found the correct route, as it gradually headed up hill to the bridge. As I got there, there were steps up onto the bridge for pedestrians, but they were being cleaned with a high pressure hose. I asked the man there if it was OK to go up and he said that yes it was fine and turned the hose off to let me past – a soaking now avoided!

There were some steps up onto the bridge, as you would expect and this took me out onto a wide walkway next to the roaring traffic. 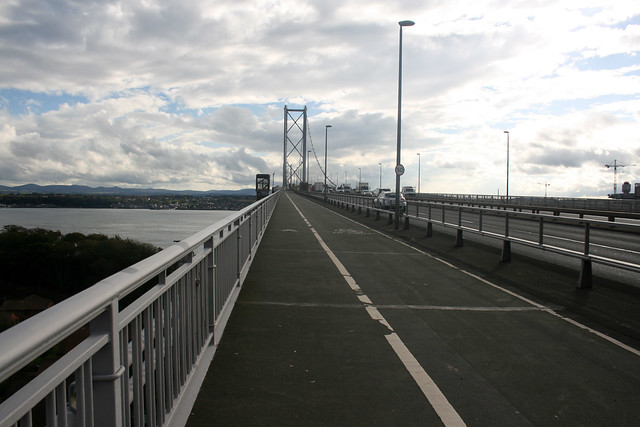 The van towing the generator for the hose was up here too, parked on the path but there was room for me to get around. I headed out onto the bridge and was surprised to note that once you are away from the approach piers of the bridge, it does shake around quite a lot, perhaps more so as it is getting near the end of it’s life.

It is an impressive structure, though, towering over the river, but nonetheless it is overshadowed by it’s older and grander neighbour, the Forth rail bridge. 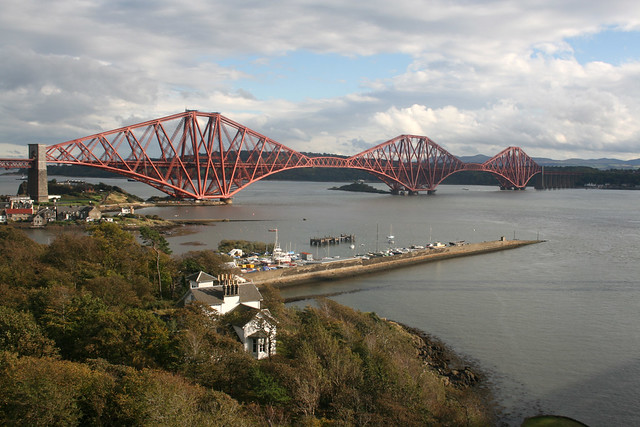 It is wonderful to watch the ever changing light catch this bridge, the trains passing over it, the boats passing under it, and the fierce currents of the river far below. 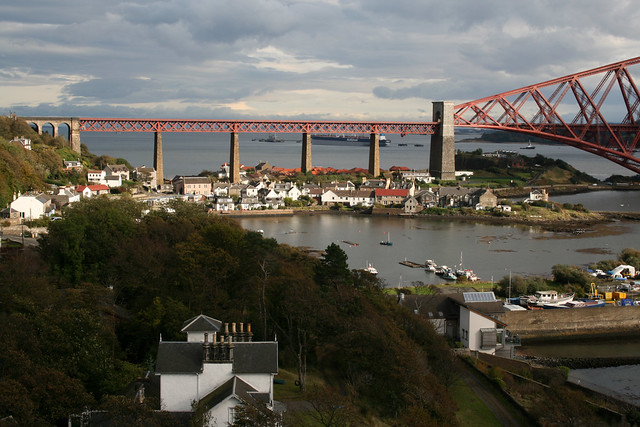 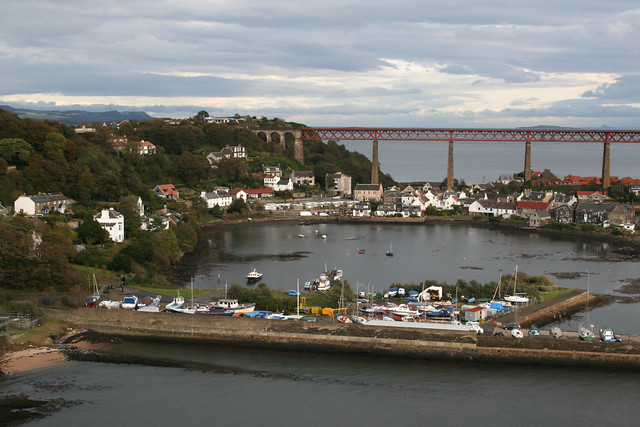 Soon you come to the first pier and cross onto the centre section of the bridge. The size of the Forth rail bridge though means I still can’t catch all 3 of the spans on my camera! 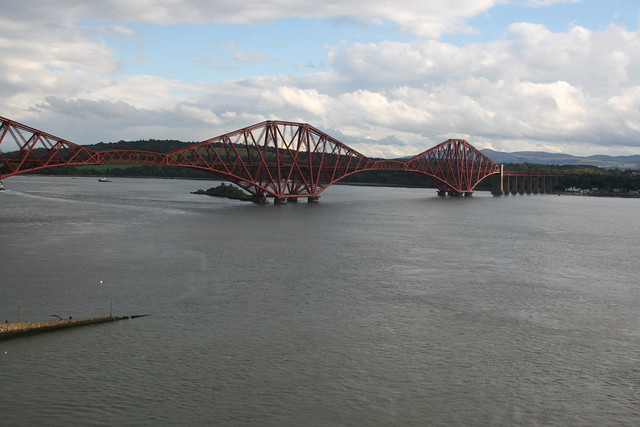 Soon I reach the centre of the bridge and get a wonderful views of the coast on either side, which looks particularly good in the early evening sunshine. 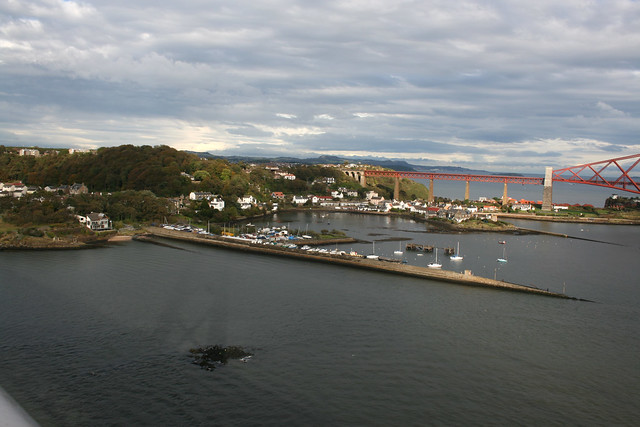 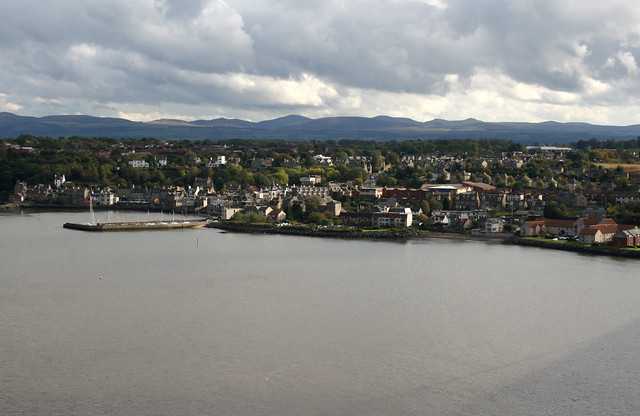 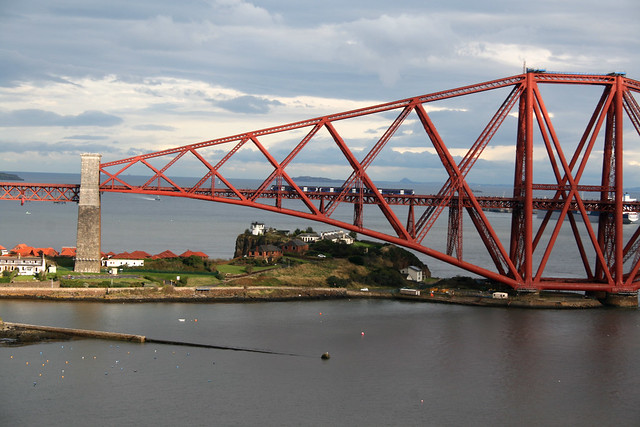 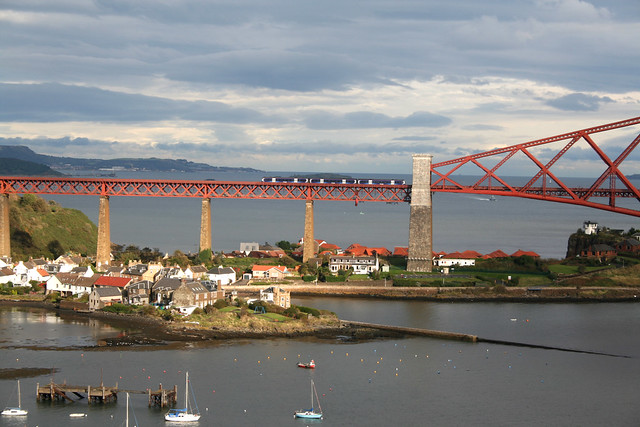 Continuing to South Queensferry, it is now downhill all the way. The traffic continues to thunder over the bridge, which vibrates quite alarmingly when a large lorry goes over. Soon I am nearing the other end and can see where the old toll booths used to be – Scotland having abolished all road tolls some years ago. 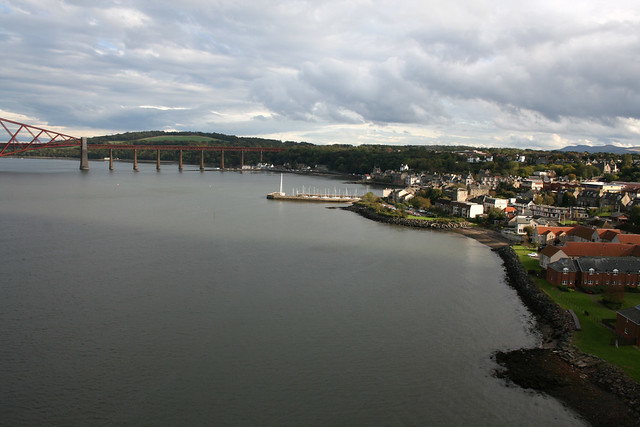 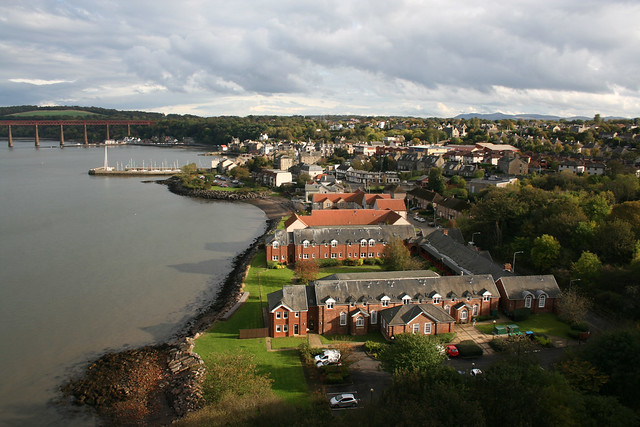 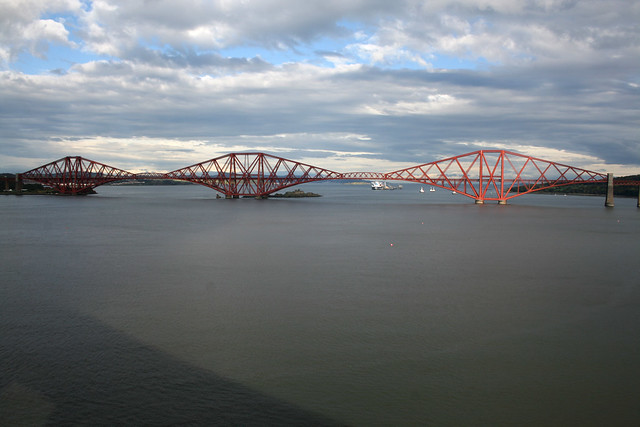 My next challenge is to find a way down off the bridge. You have to continue quite a way, after I’ve stopped being above water before finally there are steps down to the left, in front of what I assume is the bridge control building. These take me down a short way and then I head through a subway underneath the bridge. To be honest I am not sure if this is the correct way (or at least the shortest way) but I don’t want to turn back so continue. Once on the other side, I take a road heading down hill and then turn right to pass back under the bridge and follow a road east, parallel with the river. 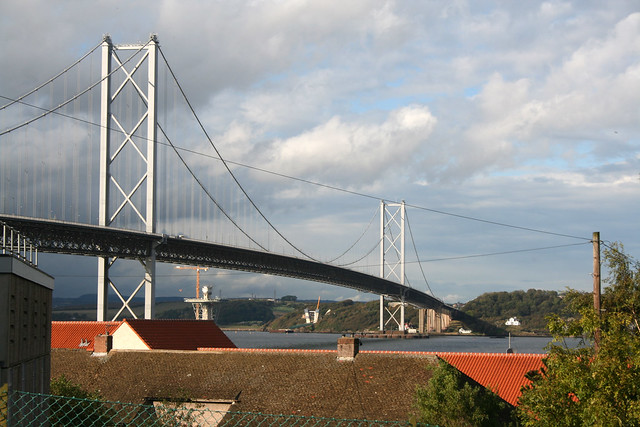 By good fortune this soon brings me to the centre of South Queensferry, where I had been a few weeks previously, so I know it quite well now. 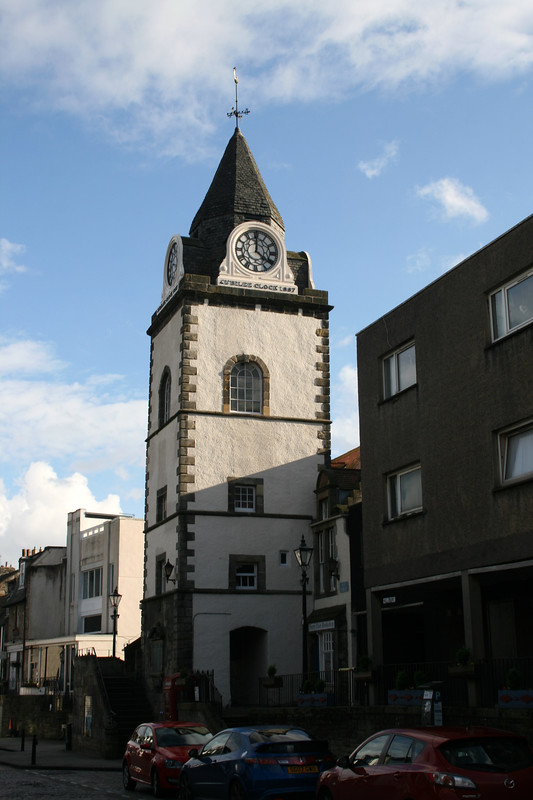 I had time so decided to walk out on the walls of the harbour to get a better view both of the bridges and the town. 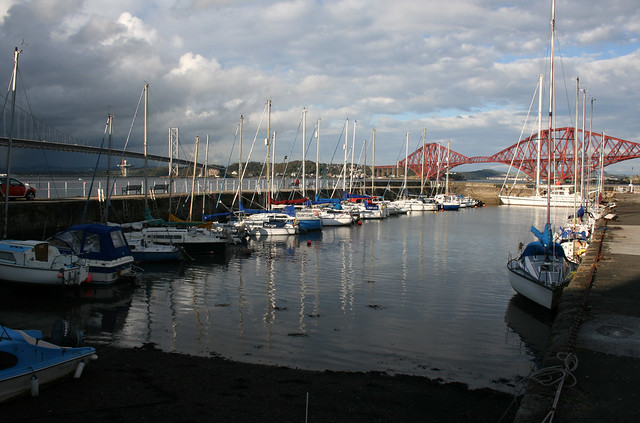 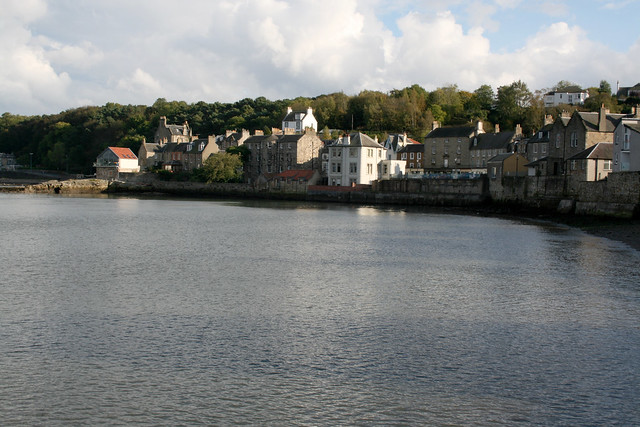 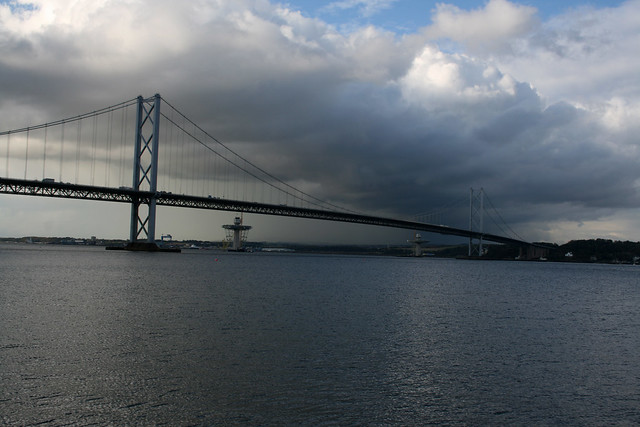 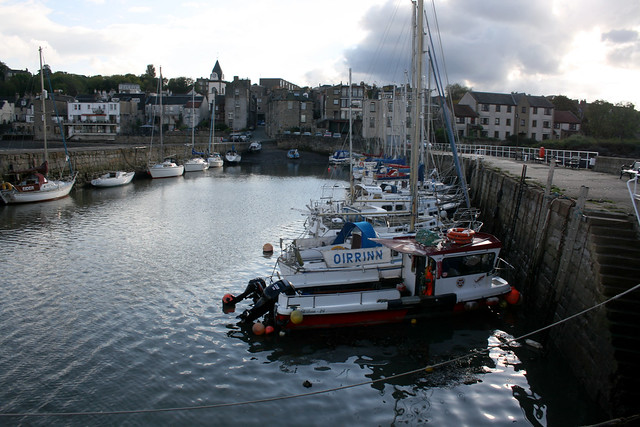 Returning from the harbour, I passed along the attractive main shopping street, the cobbled streets adding character. 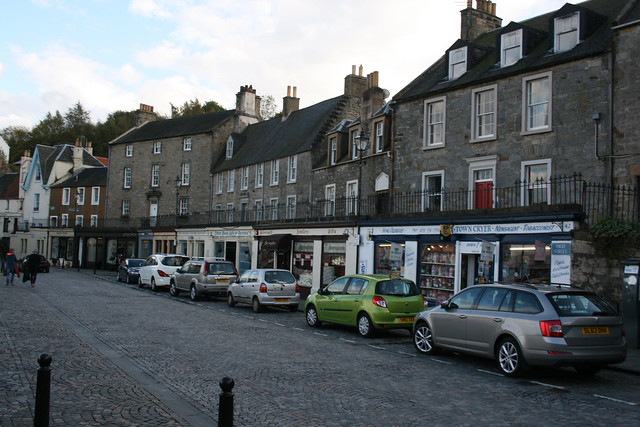 At the end, the houses on the end finish and the road then becomes more of a promenade, as I follow it to right under the bridge. 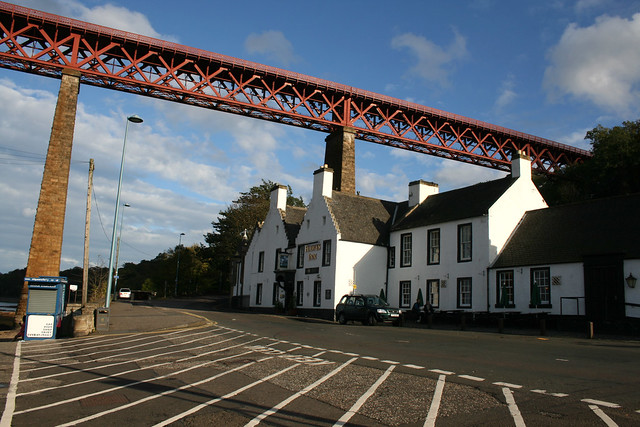 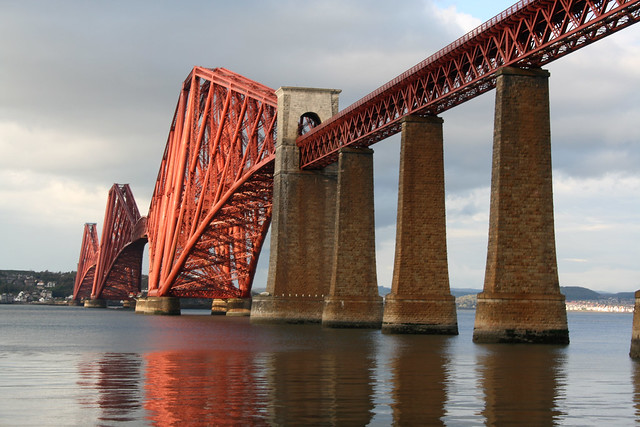 I took a couple more photos and then had to head up the hill to the station, quickly forking off the road up steep steps and then following the signed path that brings me directly to the station. 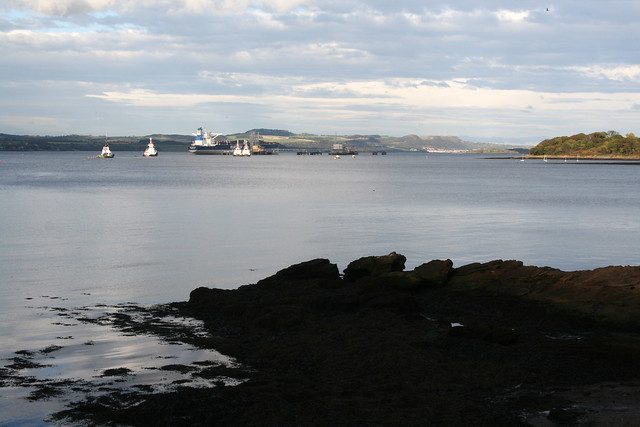 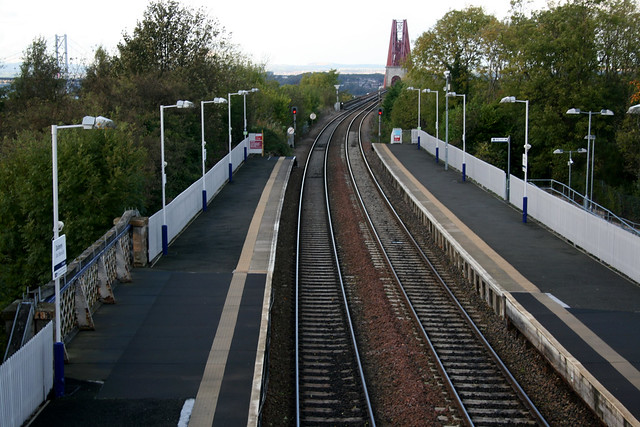 I was in luck, as the previous train was running late, so I only have 2 minutes to wait for a train instead of the expected 12, a good result (it is nice when a delay works in your favour!).

The early arrival in Edinburgh means that I have enough time to walk up the hill to see the castle and the lovely view of the city from it, before I need to head back to the station and my train home, for the long journey back home in Surrey. It was a good day and I’m pleased I managed to get a walk in today too albeit a short one. It also means I have completed the coast line of Edinburgh and crossed into my next county, the Kingdom of Fife. Better still Fife also has an official coast path making route finding simpler, too.

Trains run approximately 4 times per hour Monday – Saturday and twice an hour on Sunday between North Queensferry and Dalmeny (as the station in Queensferry is called). Trains take between 3 and 4 minutes to cross and are all operated by Scotrail. All the trains continue south to Edinburgh Waverley station whilst most of those going north operated around the Fife circle.

Here are the complete set of photos for this walk: Main Link