This was the second day of a 4-day trip to complete the coast of Northumberland. I had visited Staple Island in the morning and had intended to visit Longstone Island in the afternoon. However as I wrote up in my post about Staple Island my boat trip to Longstone Island for the afternoon was cancelled. Originally I had planned for my next days walk to be from the land end of the Holy Island Causeway at Beal to Bamburgh, but that was going to be a very long walk and with an uncertain route, but likely much of it on roads.

So I now found myself in Seahouses with much of an afternoon to kill. I decided therefore to try and cut the next days walk short by walking as far as Budle Bay today.

I had had a slight headache in the morning, which had now got much worse during the day and was throbbing so I was not feeling particularly good but decided to press on anyway, keen not to waste the rest of the day. So I drove the short distance up the coast to Bamburgh (having already walked the coast from Seahouses to Bamburgh on a previous occasion).

I love Bamburgh. The wonderful castle perched on the rocks behind miles of glorious undeveloped beach and with views out to sea of the Farne Islands, it is beautiful. 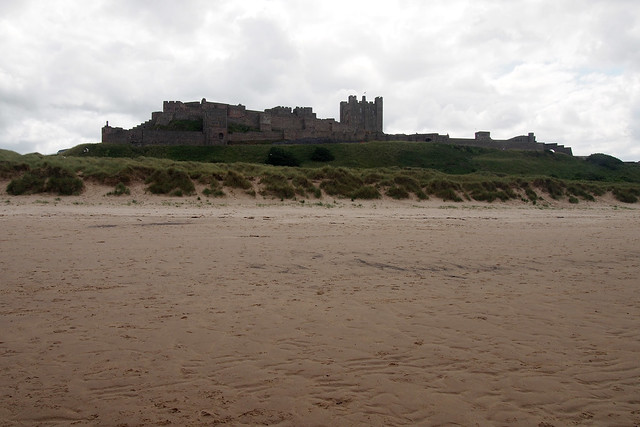 I parked in the car park near the castle which had the bonus of being free! I couldn’t resist taking many photos of this amazing castle again, either. 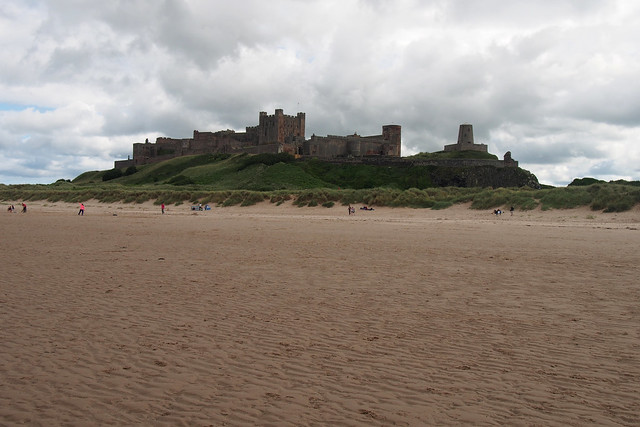 I headed down to the beach and took more photos of the castle from the beach. The tide had gone out now so there was plenty of hard sand to walk on, making for easy walking. 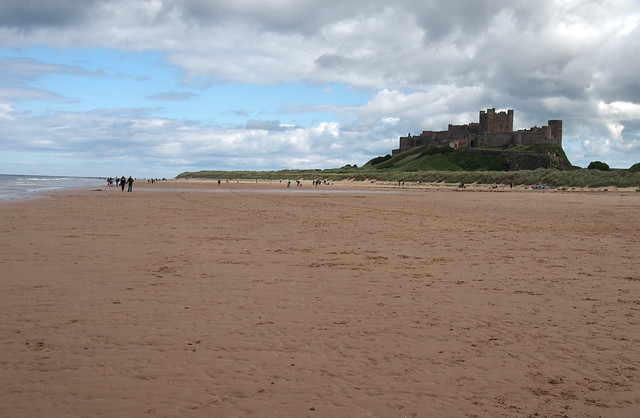 As I headed north I soon came to an area marked as Blackrocks Point. There were indeed black rocks, now forming a line behind the beach. I am not sure what is the reason – they look natural so I presume there is a line of coal which is exposed onto the beach here. 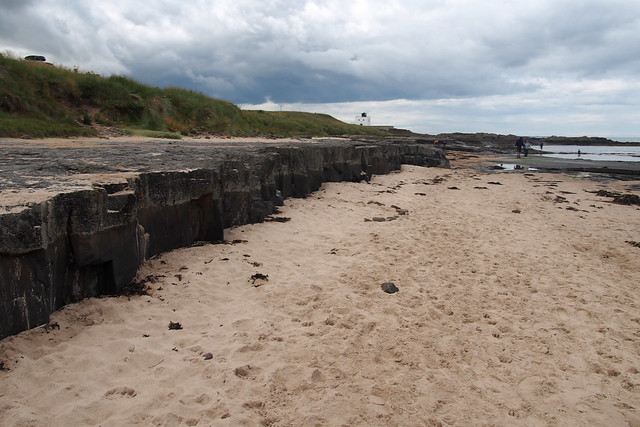 On the cliffs ahead was the low Blackrocks Point lighthouse and looking back I took another view of that wonderful castle.

To avoid having to walk over the rocks I then climbed through the dunes to the minor road behind and followed this behind the lighthouse. The lighthouse was not as pretty as many lighthouse, being so short. 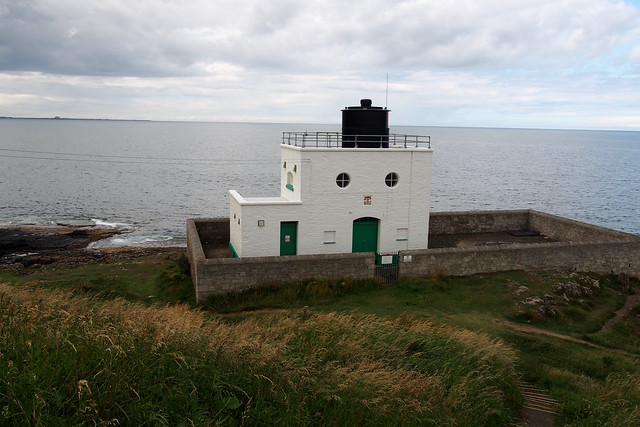 Just beyond it was what looked like it might have been some sort of old breakwater or harbour wall but if it was, it wasn’t being used as a harbour now. 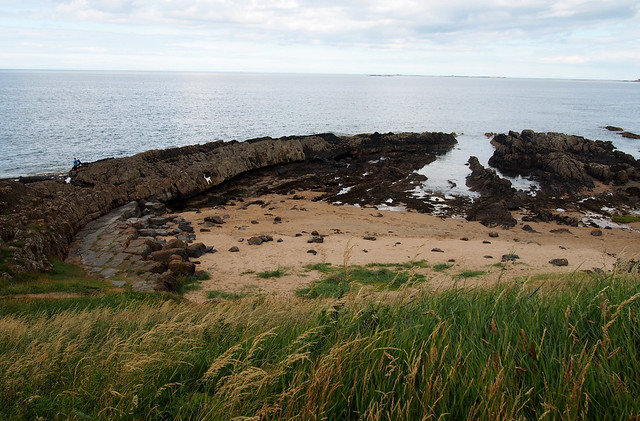 The extra height gained had also given me a great view back to Bamburgh once more. 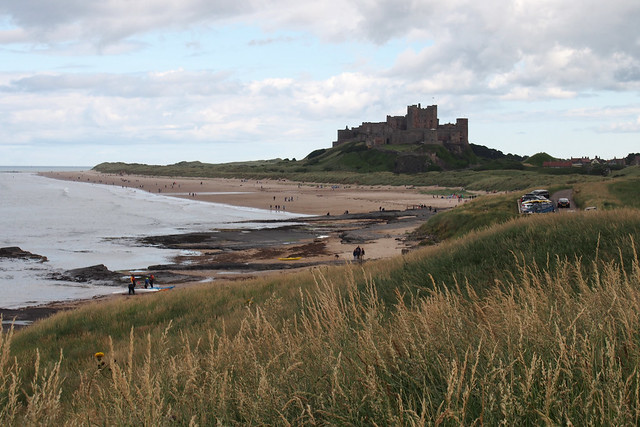 Onwards the coast now was low gently sloping grass banks with grey rocks at the bottom, but I could see the fine sands of Budle Bay ahead. 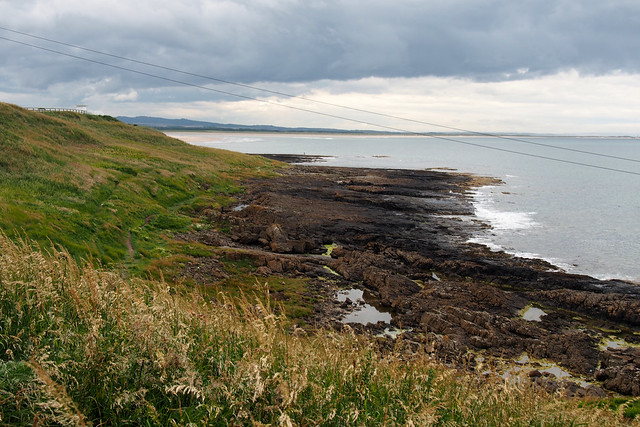 I passed one of the helpful Northumberland coast path signs which said it was ¾ of a mile to Budle Point.

Out to sea I could see a bird of prey (a Kestrel I think) hovering and beyond the island of Lindisfarne, more commonly known as Holy Island. You can see it just above the horizon in the photo below. 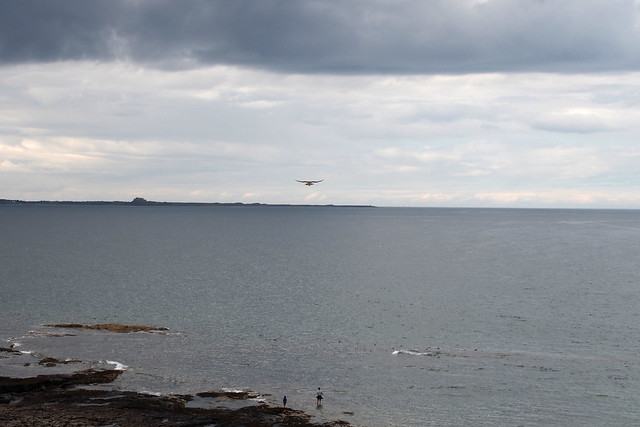 Rabbits were bouncing about in the fields to my left too. 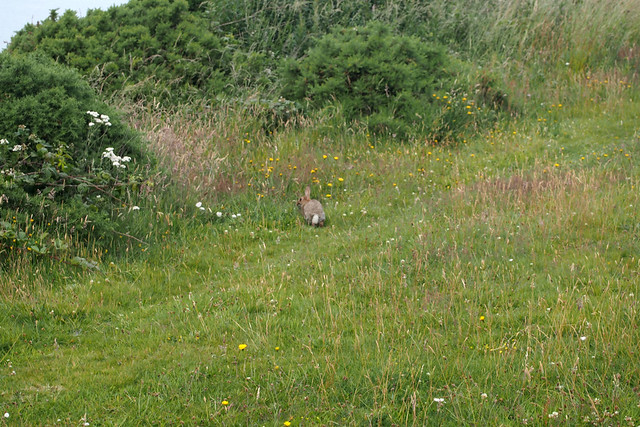 At this point the road ended and I could follow the coastal footpath along the landward side of a golf course. I was now passing some sandy little bays again between the rocks, as the tide was now coming in. 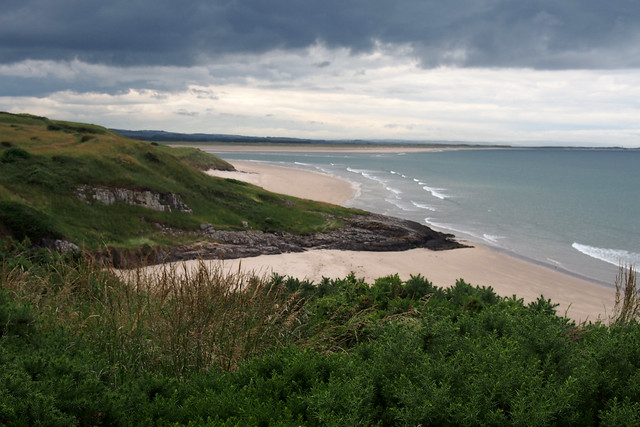 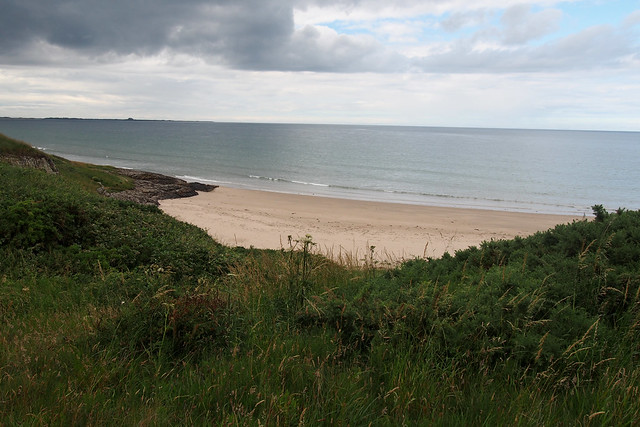 Ahead I soon reached Budle Bay. I could see the main sands ahead and Budle Water crossing it in front. 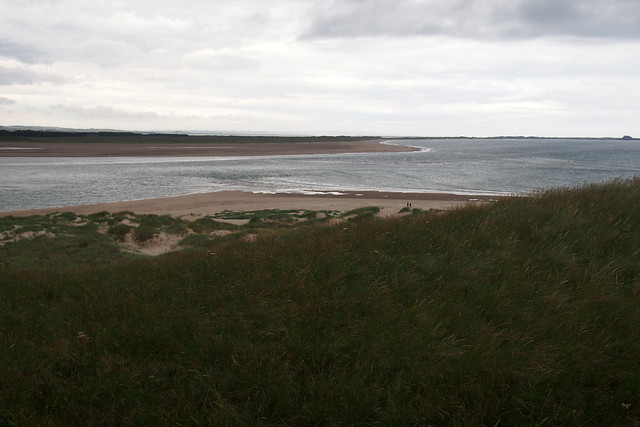 For my long walk tomorrow  I had hoped that I might be able to get across Budle Bay and ford the river (there isn’t a bridge, and it would save many miles of road walking if I could do so) so this was partly useful to help me check that for the next day. It was clearly far too deep to try to get across at this state of the tide but I wondered if it might still be possible at low tide. 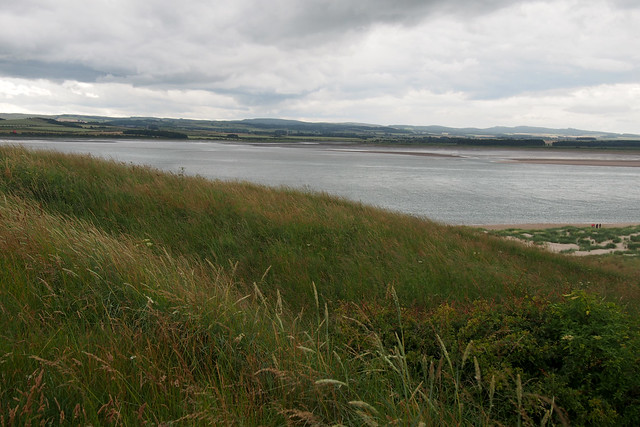 I then headed back through the dunes down to the beach now more of an estuary than open coast. 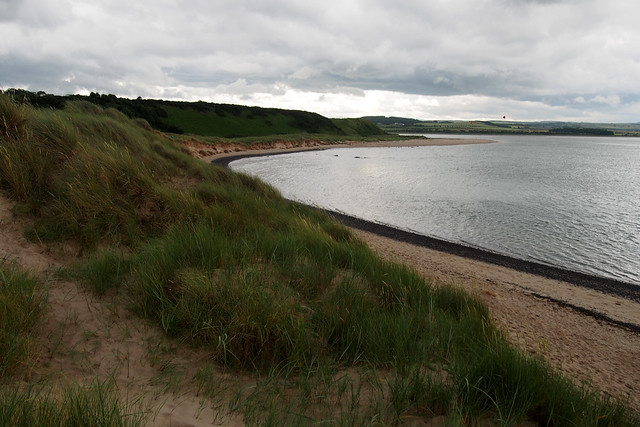 The path followed down to Heather Cottages, where there were a few cottages, as you might expect. Here the Northumberland coast path headed inland ending up over a mile inland. The B1342 however was closer to the coast so to stick within my rules I’d follow that rather than the coast path, but I was not especially looking forward to it because I didn’t think it had a pavement so I decided to see if I could continue along the shoreline. Things started easily enough, with a beach lined with sand at the back and coal dust nearer the shoreline. 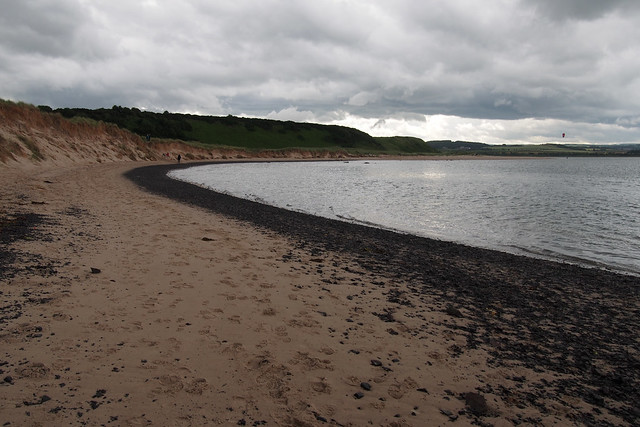 Soon the beach such as it was turned to rock and pebbles and it became tricky to make my way on the shoreline over this. 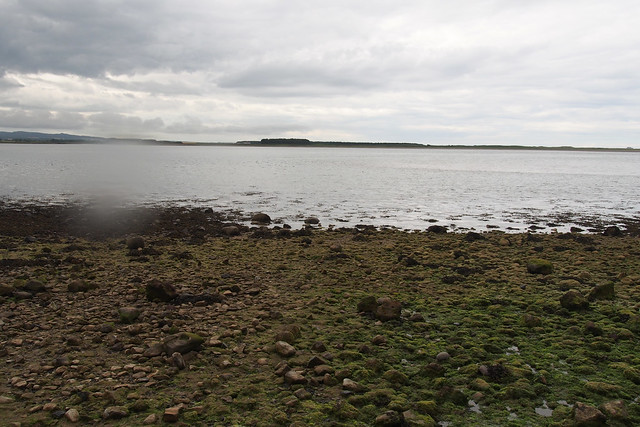 Thankfully I did make it around Kiln Point and here I could continue along the shoreline with the road now close by inland. 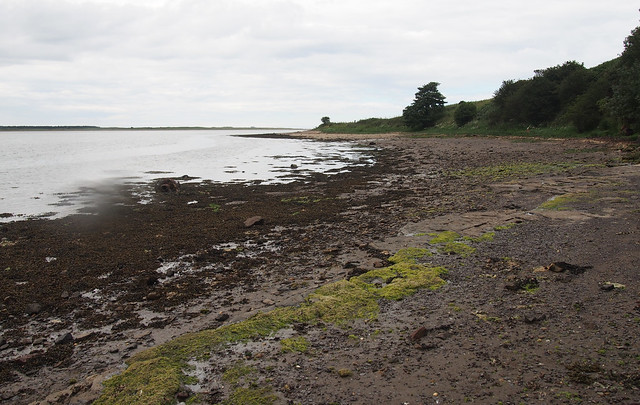 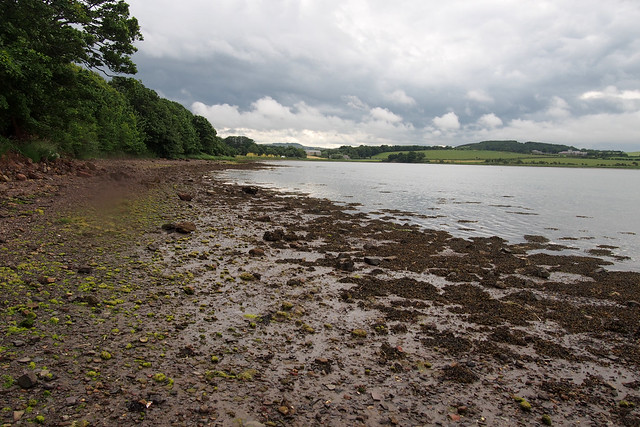 I knew that I would be able to climb up to if, if needed. As I continued further south the road became lower and I was able to make my way up to the road by a layby where there was also an information sign. As I thought, the road here (the B1342) was pretty busy. 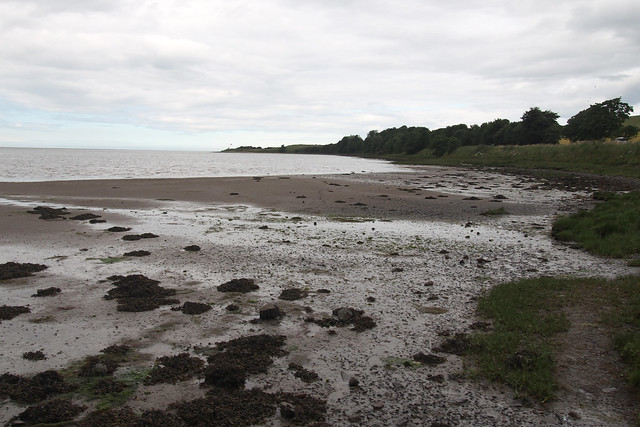 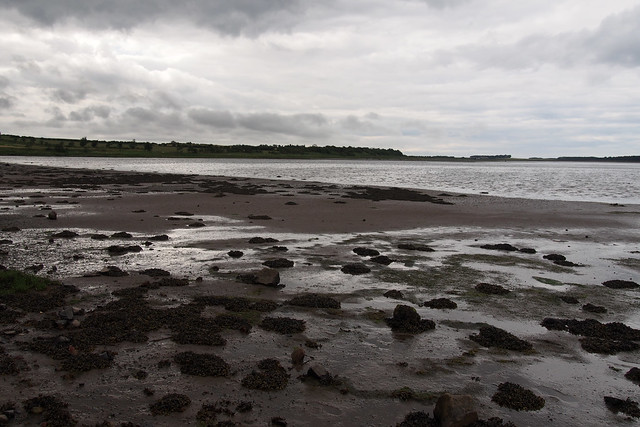 However I joined the road briefly into the village at Budle Bay itself. I think the village is actually called Warren Mill, the village of Budle itself being a mile or so east along the road. However the bus does stop here so I initially thought i’d take the bus back to Bamburgh – but  having checked the bus times I had around an hour before the next bus. However from the map I worked out it was 3km back to Bamburgh if I took a more direct inland route, which should be doable in about 40-45 minutes and would be quicker than waiting for the next bus.

I took the minor road leading inland to the Warren House Hotel and soon passed the hotel. The road then soon headed into a wooded valley and after around 1km from the shore I reached the Northumberland coast path official route, which I would follow back to Bamburgh. This headed up through a rocky path below Spindlestone Heughs. It was a pleasant walk and the trees were welcome, as it had now started to drizzle. 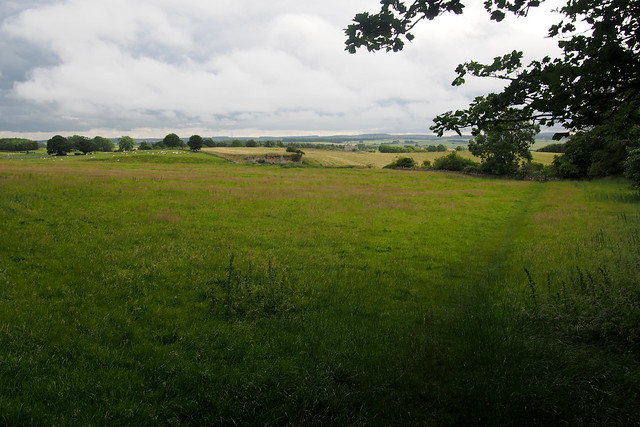 On reaching the minor road I turned left and followed it around the edge of a campsite, which was both busy and noisy – it being the summer holidays, I was glad not to be staying there, it was noisy enough from the road. At the T-junction I turned left and then shortly right now following St Oswald’s Way. The path headed across the edge of fields. I was soon passing old earthworks which are marked on the map, but unnamed. 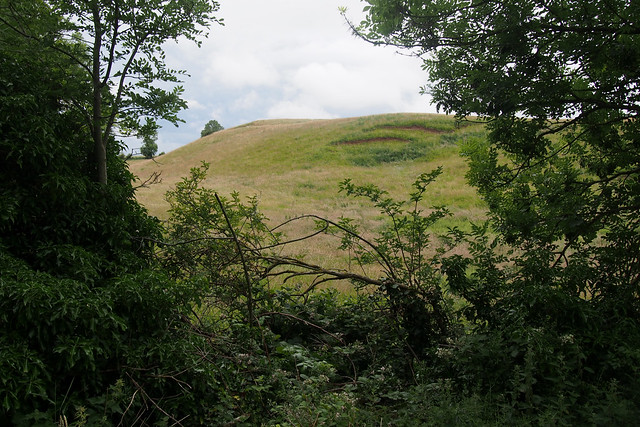 I could also look across Budle Bay inland to where I would be walking tomorrow. 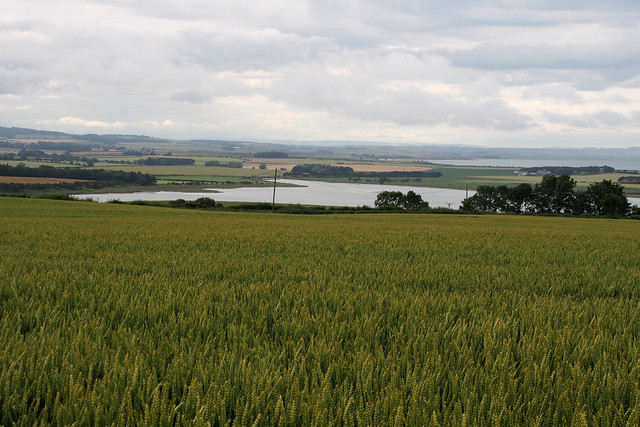 The path soon became a wide mowed track which gave me fine views back to Bamburgh. 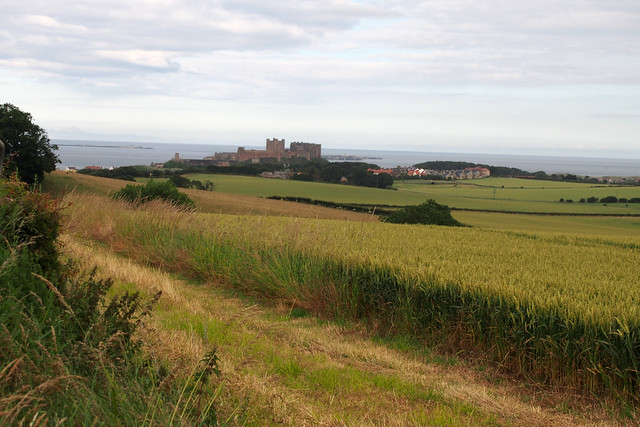 Sadly this soon deposited me back on the B1342 and there seemed little alternative but to walk along the road. 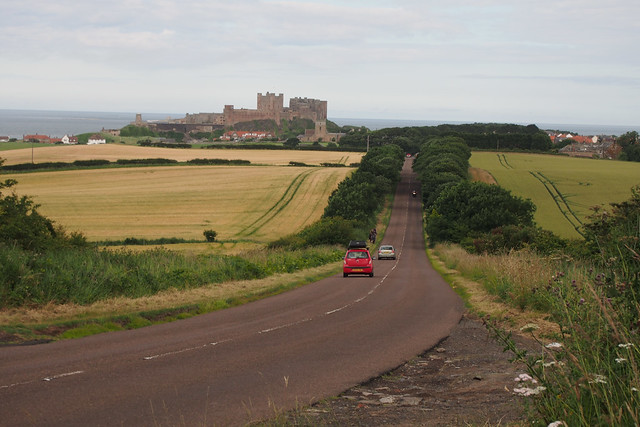 Having said that the grass verge was quite well walked so for most of the time I could walk on that rather than in the road. Soon I reached the edge of Bamburgh where the speed limit dropped to 30mph and the traffic became less intrusive, and soon after I got a pavement as I returned to the village. I passed the church and headed down to the main village. 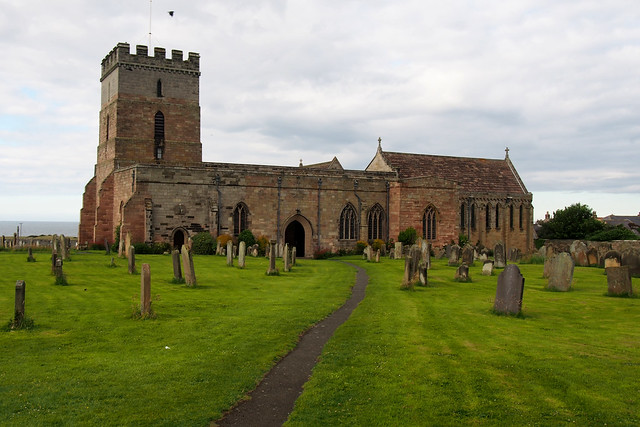 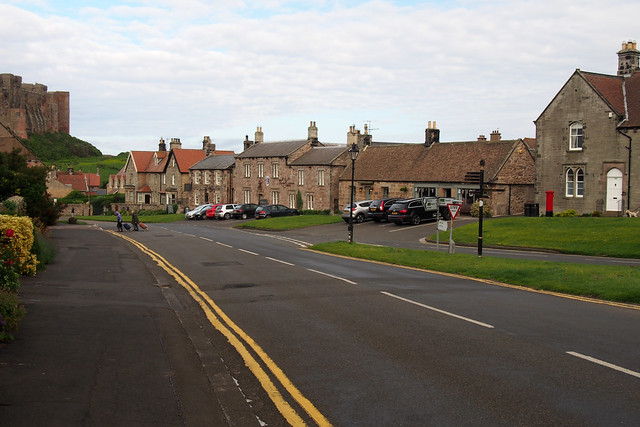 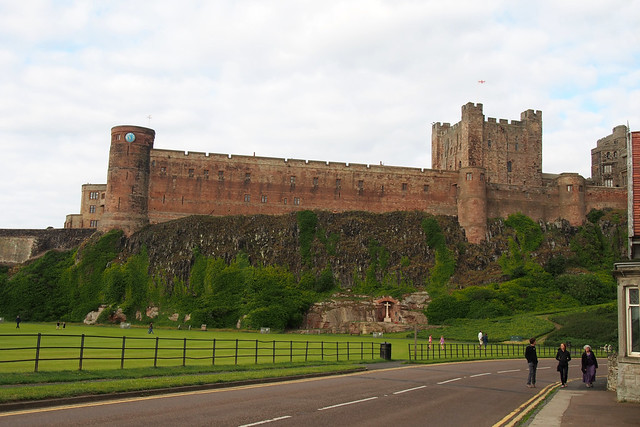 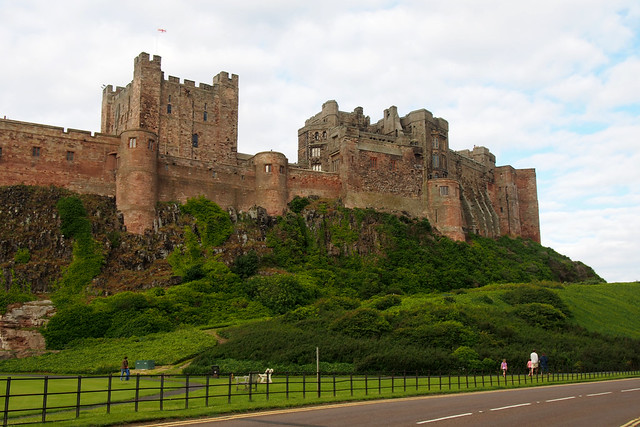 It had been a lovely walk. I headed back to the car park, where I stopped for a drink and then drove back to my hotel near Newcastle Airport.

Here are details of the public transport needed for this walk. There are two buses routes which between them provide a broadly hourly service, except on Sundays, when it is much less frequent:-

Here are the complete set of photos for this walk : Main Link