I’ve just returned, rather later than planned, from a mostly successful trip to walk more of the North West coast of Scotland. I also discovered in the process that it really is apparently possible for me to wake up (very early) in the morning in Edinburgh and still make it into work in Surrey for 9am! (but that part is not something I would wish to repeat).

This section of coast really is stunning and the most beautiful part of the coast I thought was on the walk I did between Poolewe and Gairloch where I took in the far end of the headland between these two towns, where I came across the most stunning beach at Camas Mor. 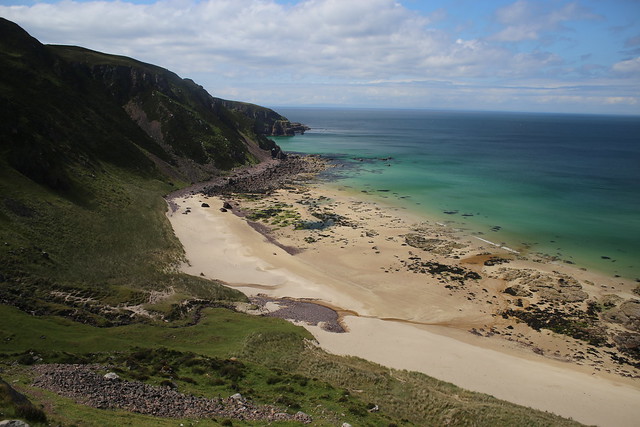 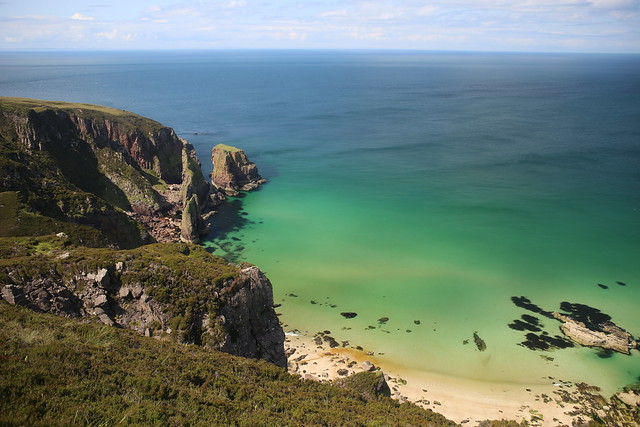 In fact this days walk was quite reminiscent of the wonderful walk to Cape Wrath I did least year. It really is a wonderful part of the coast and I will share more photos of these walks when I get as far as writing up my walks on this part of the coast.

Unfortunately, I had more problems on my last day. I was due to fly home from Inverness on Sunday 21st July. Having set off on my planned walk for that day I checked the status of my flight home whilst having lunch (because I know, from experience, it is usually late) only to discover to my horror that rather than late it was showing as cancelled. I had previously had to re-plan this trip and re-book flights with EasyJet after British Airways cancelled my original booked flights. Now the replacement flight I had ended up booking had also been cancelled!

Checking the Inverness Airport website I quickly found that the cause of the problem was that, unknown to me, a strike by air traffic controllers had closed down Inverness airport for the day, so all flights to and from the airport were cancelled. I was annoyed that, despite having my email address and phone number and having already checked in for this flight, EasyJet had not contacted me to tell me that it was cancelled. Oddly I’d also heard nothing about it on the local news.

So I had to abandon the rest of my planned walk that day and drive down to Inverness Airport to see what options I had. Fortunately here the situation improved. There were staff at the EasyJet desk that could help.

Initially all they could offer me was another flight 24 hours later to London Luton (where I was meant to be flying too on the now cancelled flight). However I was due to be at work the next day so that would mean I’d miss a days work (so either having to take unpaid leave or lose a days leave – the only one I have left). I explained that I needed to be at work the next day if possible and asked if there were any flights available from other airports that would get me there earlier. Here the staff were really excellent and told me they had early morning flights from both Glasgow or Edinburgh to London Gatwick the next morning, with space, that they could book me on to instead and which did I prefer? I opted for Edinburgh because the flight from there was a little earlier.

This is where I was very impressed, because the staff explained that they would also book and pay for an overnight hotel for me in Edinburgh and cover additional expenses such as meals for me and even better book and pay for a taxi to take me, as soon as possible, from Inverness Airport to the hotel that they had booked for me in Edinburgh. I was offered a choice of the Novotel in the city centre or the Edinburgh Airport Travelodge. I opted for the latter because whilst far less luxurious it was comfortable enough and I preferred to have a shorter journey to the airport the following morning so that I did not have to get up any earlier, rather than travel further from a nicer hotel in the city centre (I was not going to get there until the evening anyway and with the early start the next morning, would not be doing any sight-seeing anyway).

So with this all arranged, 20 minutes later I was in a taxi to Edinburgh. The driver was very pleasant and although he confirmed it was all pre-paid through the taxi companies office so there was nothing for me to pay, he ran the meter anyway out of curiosity at the cost. By the time I reached my hotel, the meter was reading well over £300! I was very glad I was not going to be paying that. On checking in I was also pleased to find that this Travelodge had a restaurant and that breakfast had also been included (and available from 3am), which was nice.

After a short night I got to the airport at Edinburgh on time and thankfully the flight I had been booked on arrived at London Gatwick on time. I was very lucky to catch a train (with 3 minutes to spare) that meant I got to work at 8:59am! This was a relief because the company I work for, having been taken over, is currently consulting on making redundancies of at least 70 people. Missing a days work, even through no fault of my own, was unlikely to help my cause in this regard.

So overall apart from not telling me in advance my flight was cancelled I was very impressed with how Easyjet handled the situation for me. You hear horror stories of passengers having to sleep on the floor at airport terminals and I feared that might be what happened to me. I really did feel the staff did all they could to resolve a situation for me as best they could, even though the cancellation was not in any way their fault – and at considerable expense with booking taxis for a trip of over 150 miles! I do however hope that my next trip is hassle free.