A few years ago I walked around the coast of Jersey (you can read about these walks here). However Jersey has a very large tidal range (about 12 metres). This means at very low tides the island more or less doubles in size. This is most acute in the south eastern corner of the island where you can walk well over a mile from the shoreline at low tide.

One of the places you can walk to is Seymour Tower. This is a sort of man-made tidal island. It was built in 1782 after the Battle of Jersey to help defend the island against French invasion. The eastern coast of the island (that closest to France) was especially heavily defended, with numerous Martello towers and a large castle.  It is located around 1 1/4 miles from the shoreline, built into rock and is accessible at certain low tides.

For this part of the walk I was following a guided walk, booked with  Jersey Walk Adventures as to get out to the tower without local knowledge is not recommended and in any case even at low tide you have to wade through some quite deep water to get there. The tower is now used as a holiday let, owned by and managed by Jersey Heritage. Facilities are basic, with two floors. The sleeping area sleeps 7 in one large bunk room whilst there is a kitchen and living area on the other floor. To stay in the tower you must be accompanied by a guide who stays with you in the tower. A solar-powered fridge is provided and a chemical toilet, but all food and drink must be carried over.

I wasn’t staying in the tower, just walking out there. I decided rather than just do the walk, to extend it a bit by starting from Gorey Pier, under the impressive Mont Orgueil Castle and walk to the start point of the walk out to Seymour Tower.

From the email I had the start point of the guided walk was “La Rocque harbour by the yellow phone box” (telephone boxes are yellow in Jersey). I didn’t know where this was but guessed from the free printed map I had picked up from the Tourist Information centre that it was the south end of the Royal Bay of Grouveille, just as you turn the corner onto the south coast of the island. Fortunately the start point was also on bus route 1, the bus between St Helier (the capital) and Gorey Pier.

I took the bus from St Helier and looked out the window to spot the harbour at La Rocque and yellow telephone box, which I soon spotted, so at least now I knew where I was heading for later! Soon the bus arrived at Gorey Pier, it’s terminus.

Gorey Pier is not a pleasure pier as such, more a protection for the harbour. In front of it is the harbour full of small boats whilst behind is the impressive Mont Orgueil Castle. 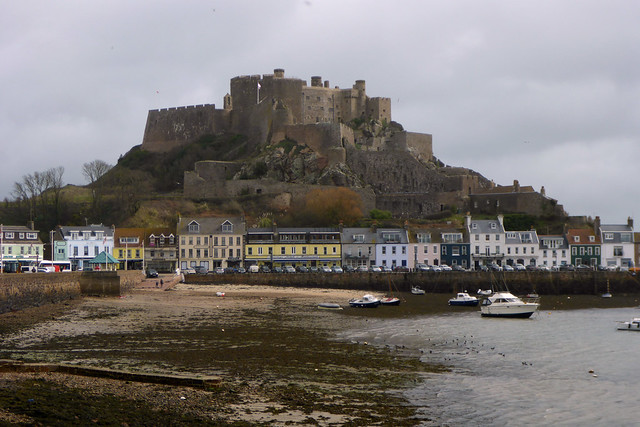 I walked to the end of the “pier” and climbed up to the see the view from the castle. Here was a fine view along the Royal Bay of Grouville. 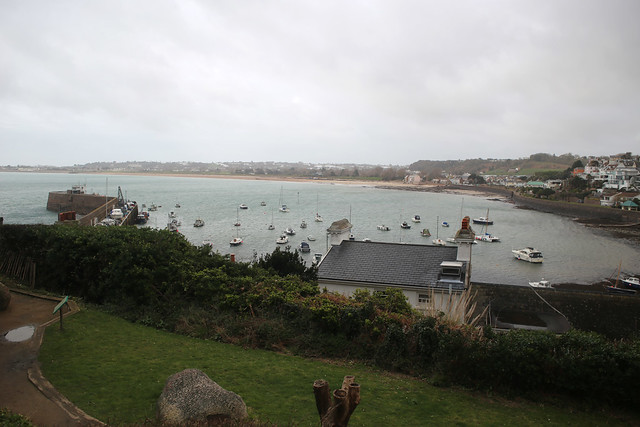 The fields behind are covered in plastic – I think it is to protect the potatoes from rotting in the damp (Jersey Royal potatoes being excellent and hence very popular). 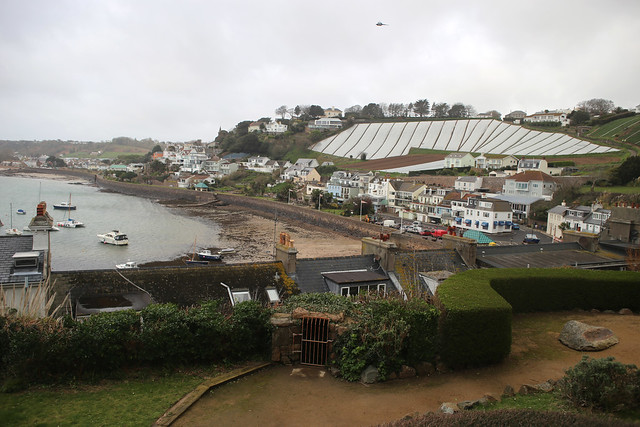 Now heading back down to the harbour it was time to begin my walk. I initially followed the promenade. This is lined with flowers and some impressively large palm trees, a reminder that Jersey is much further south than mainland Britain. 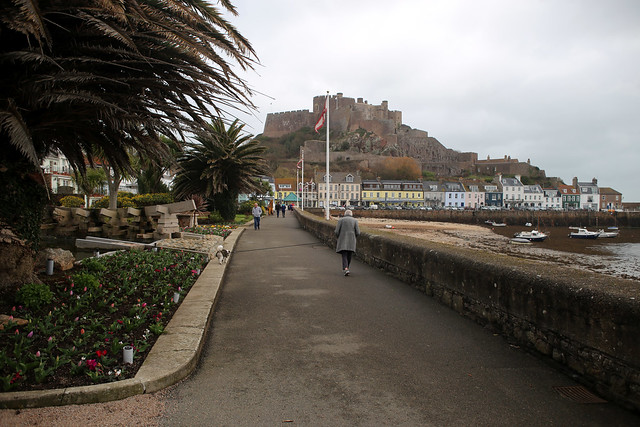 Steps down to the beach provided a beautiful view back to Gorey. After a while there was firm sand below the sea wall, so I headed down onto that instead, it is much nicer than walking on the tarmac promenade. 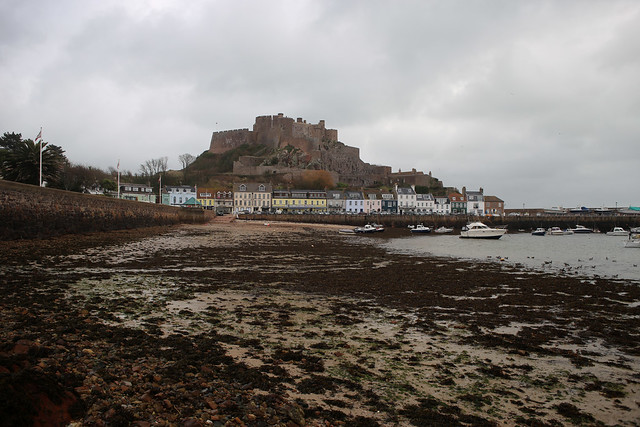 After a while I reached the end of Gorey and the promenade was now backed by a golf course and this old martello tower. 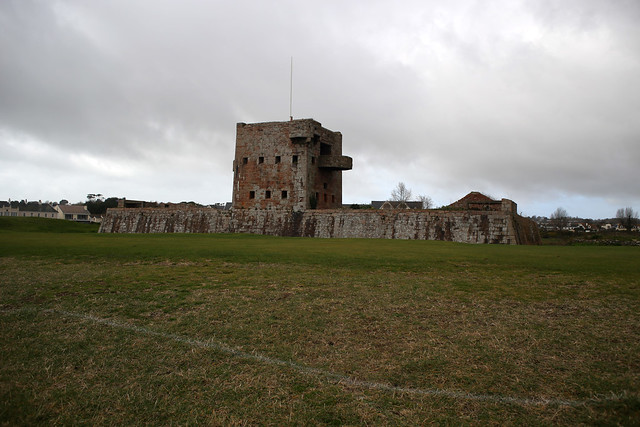 This is Fort Henry and is presumably so called because it was built during the reign of Henry VII in the 15th century. It looks a bit incongruous now in the middle of a golf course!

By now the weather was improving with the sun breaking through and making such a difference to the view. The channel islands seem to have this lovely turquoise water around them, and I was starting to see that now the sunshine had broken through. 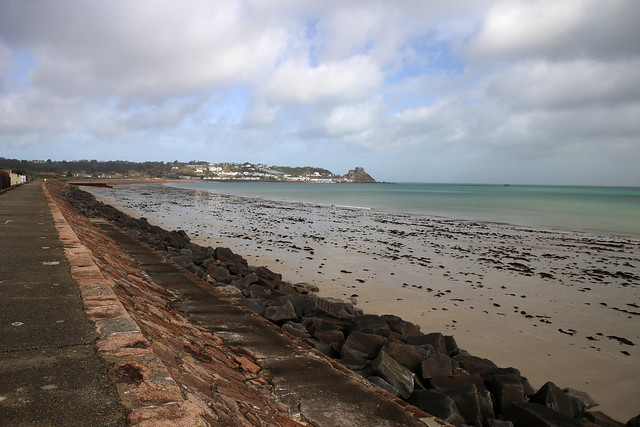 I took a zoomed-in photo looking back to the castle. 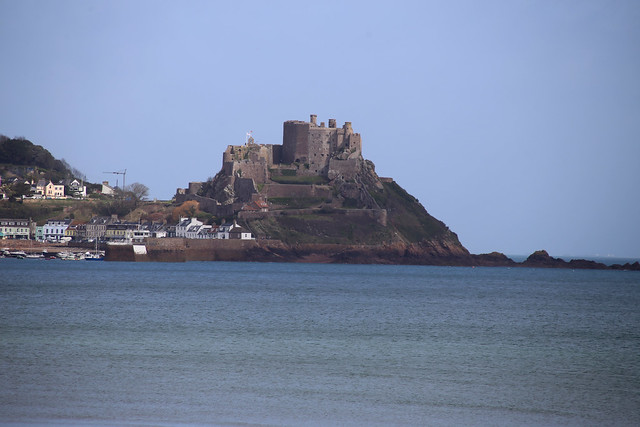 The coast here is lined with numerous martello towers and many have been converted to homes, as here. 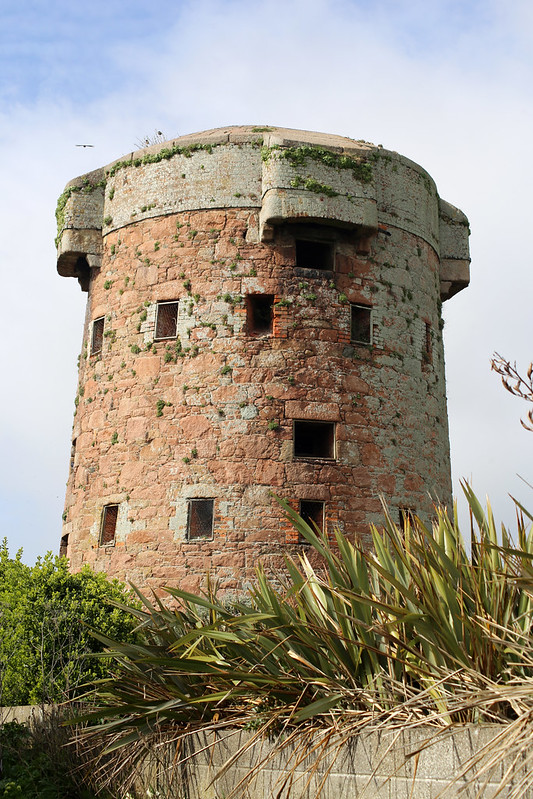 This one had even been extended, though I’m not sure it is entirely within keeping! 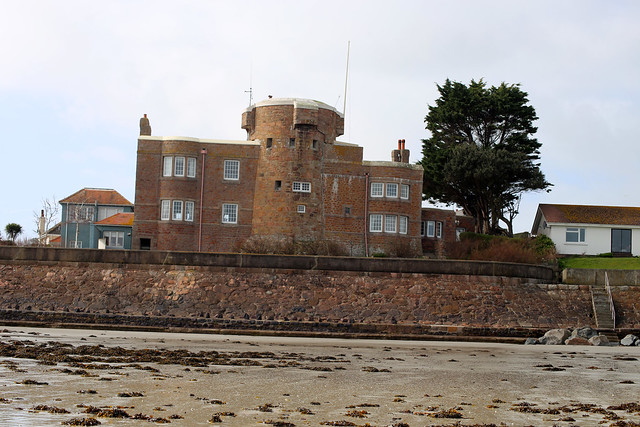 Soon I could see Seymour Tower out to sea and passed information signs about it. It was built I think in the late 1700s. It was decommissioned in 1923 and bought by the States of Jersey for £120 in 1923.  These days it is a basic holiday let, you can rent it and spend a night or two, however you must have a recognised guide to get there and back (who will stay with you) and carry over food and water that you will need.

Round the corner was La Rcoque harbour so I was only a few minutes walk away, but I had 30 minutes. So I sat on the rocks below the sea wall in a sheltered and sunny spot to have a relaxing lunch before walking up to the meeting point.

Our guide, Trudie, was already there. She greeted me by name, which was odd because we had never met (to my knowledge). However the reason soon became apparent, because she takes the bookings and there were only 3 people on today’s tour! The other participants were a couple who live only around 10 miles from me in Surrey.  I was surprised (but glad) the tour would go ahead with so few people.

Fortunately she had a van full of wellington boots (having travelled to the island by air and hand-luggage only I had no room for wellies, so paid the £1 supplement to rent some). Having changed we soon set off.

Trudie had an encyclopedic knowledge of the shore here, the various different types of seaweed and the animals that live here.

First we had to wade over a deep channel which she explained never drains out fully. In fact the beach drops quite quickly, but the land further out, where Seymour Tower is is actually higher than the first part of the beach. This is what makes it dangerous and leads to many people getting cut off, as the tide comes in and fills these water channels leaving you cut off. She quickly found some baby starfish attached to a rock (near the top left of the rock below). 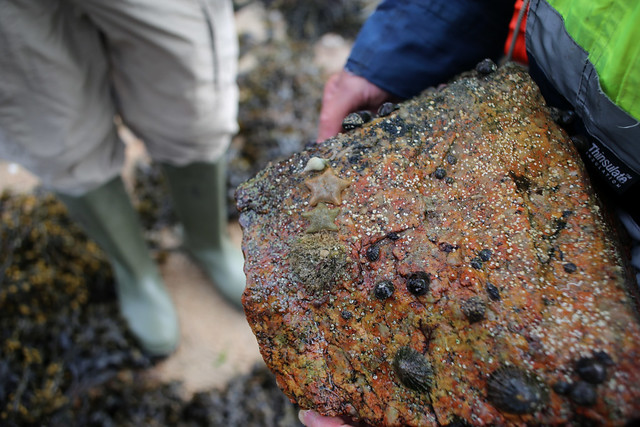 She showed us the limpets attached to the rocks, star fish, numerous crabs, sponges and various other sea creatures. It was quite fascinating, though I’m afraid I declined the offer to eat some of the sea weed. She was very enthusiastic telling us how the sea weed changed colour when cooked and what it tasted best with. I got the feeling that at her house, the answer to the question “what’s for dinner?” would be “it depends what I can find when the tide goes out”! (She explained she lived just a few minutes walk along the coast from where we had set off).

The beach varied between rocks, soft sand and coarse sand mixed with shingle. Trudie explained that some areas that were sand today had been bare rocks on previous walks, and vice-versa. 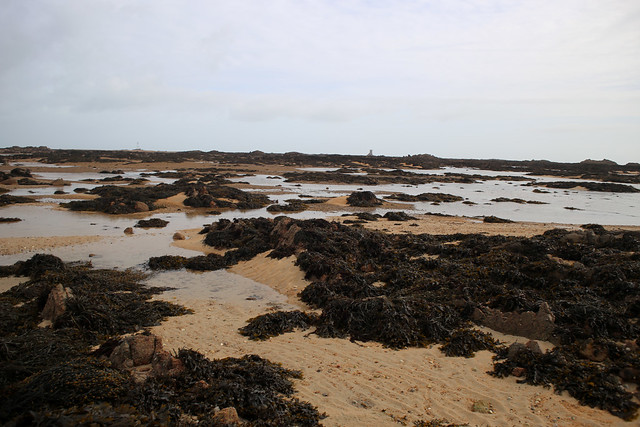 We soon reached the refuge. This is a basic structure designed for those that get cut off the tide to climb and seek shelter at the top, away from the waves. It is certainly an exposed and basic place to wait. I recall seeing the shelter on the Holy Island causeway, which looks a little more luxurious! I was hoping we would not have to use it today. 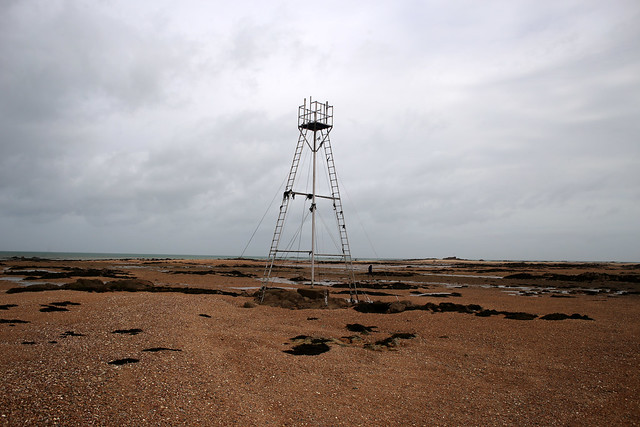 Seymour Tower was still some way off. However as we made our way over the sand, rocks, water channels and rock pools it soon became closer. 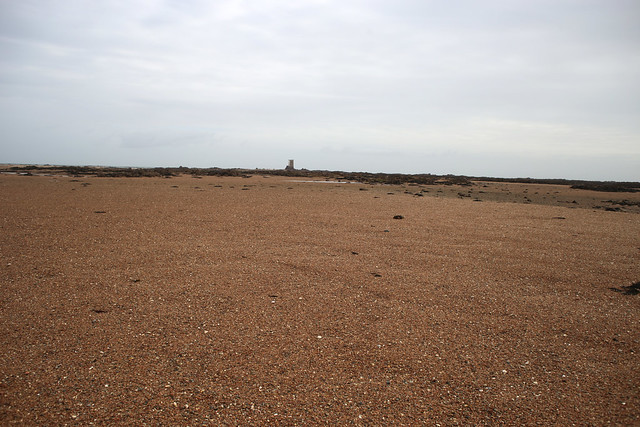 The tower is square and the two sides facing the coast are still painted white, as it is also used as a navigation aid. 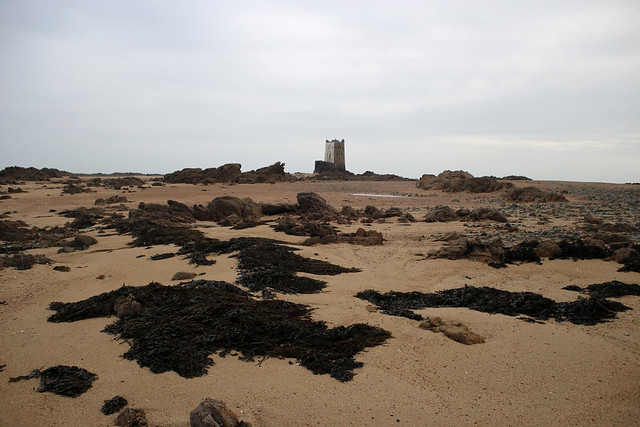 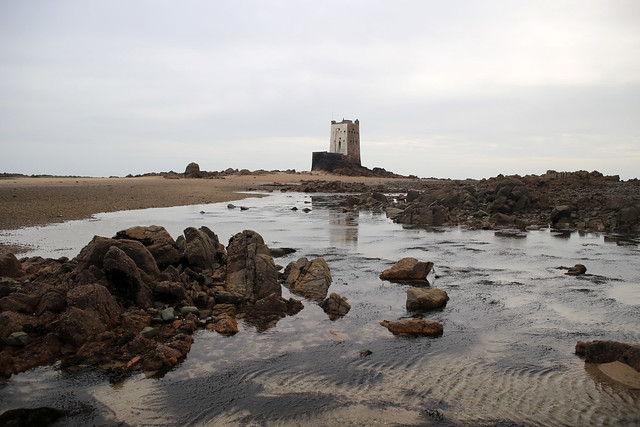 Soon we were at the tower itself and climbed up. 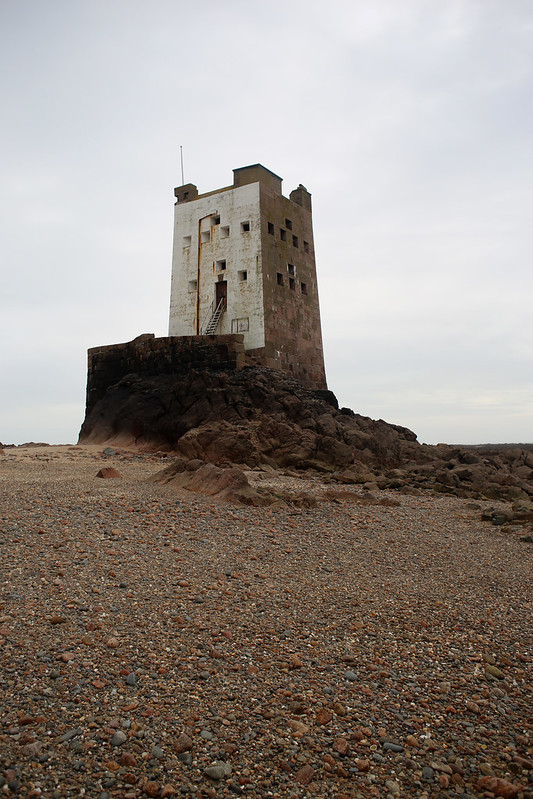 Sadly we did not have access to go inside, but there is a raised stone terrace area in front, high enough to be clear of the sea except during stormy conditions. Trudie explained this is actually a public area and people do sometimes spend the night here (even when people are renting the inside of the tower). 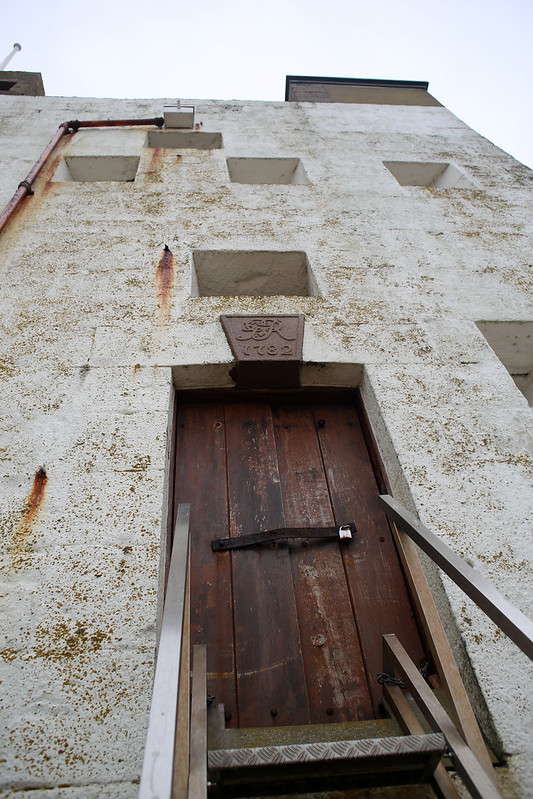 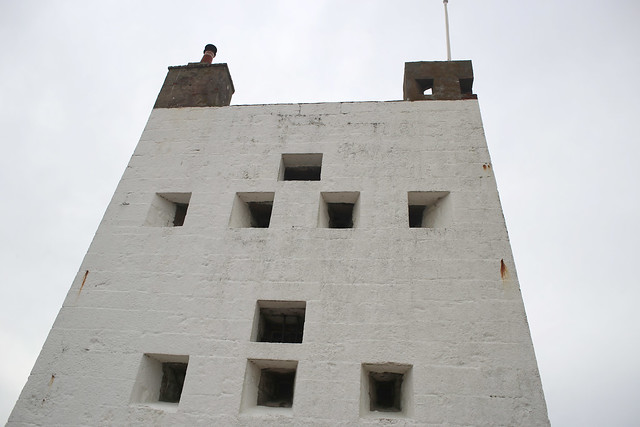 The date 1782 was above the door indicating the year it was completed making it close on 250 years old. The tower has two floors, one is a bunk room (sleeping 7) whilst the ground floor has the kitchen area and living area, plus a small private room for the guide that must accompany you if you stay here. There is a fridge (solar powered), a chemical toilet and a wood burning stove for heating and cooking and Trudie did tell me it gets quite cosy and in fact she would be staying here in a few days time to accompany a film crew (she was tight lipped on who they were and what they were filming!).

On top of the tower was a flag pole, which I could hear fluttering in the wind. Despite the fact we were more than a mile from the shore now, there was still a fair bit of sand beyond. 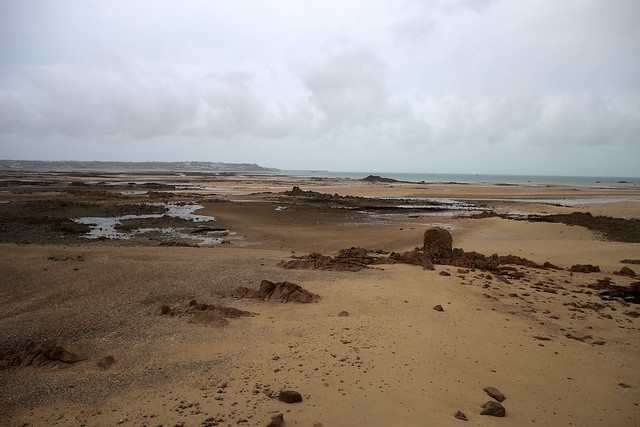 In fact the tide goes out lower than this, exposing more Oyster beds (which are still used) and allowing longer walks out to another tower, Icho Tower. 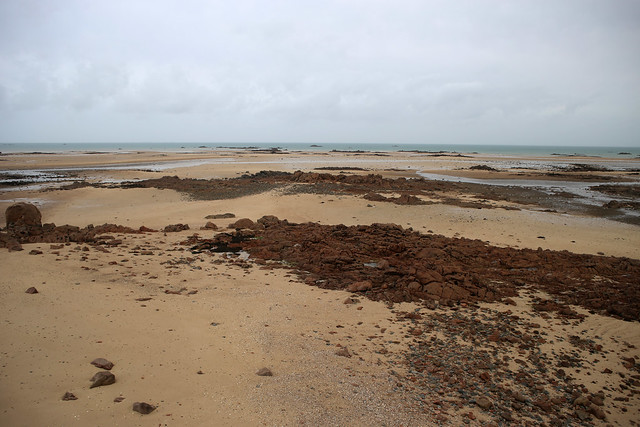 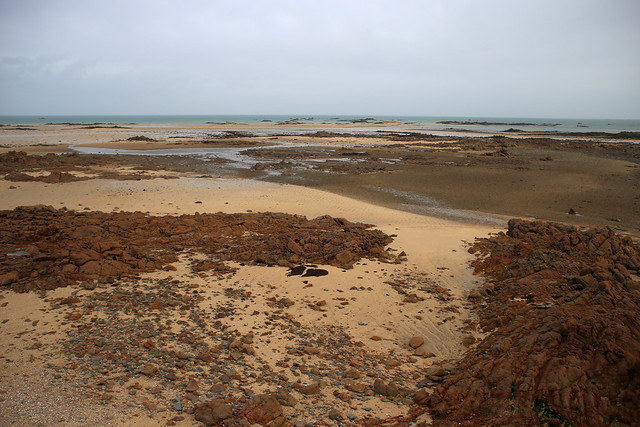 Sadly it was soon time to walk back. 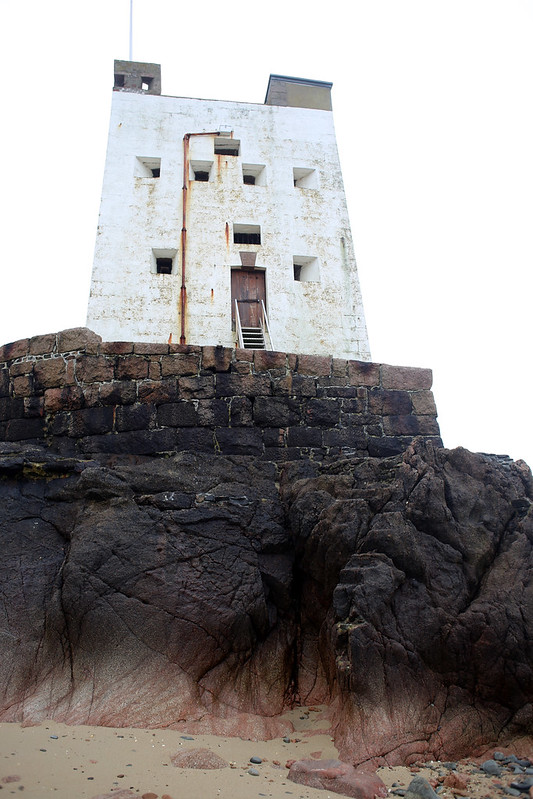 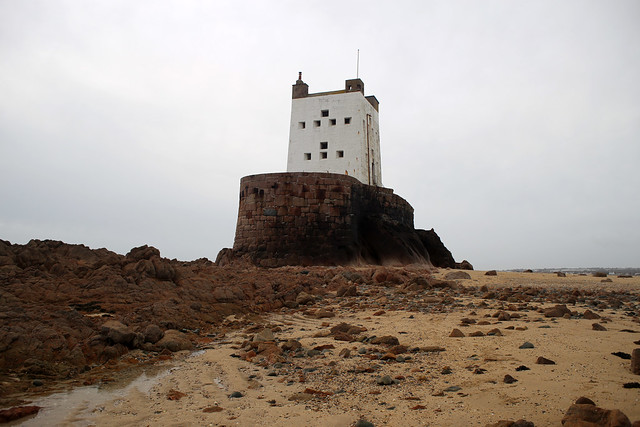 The return journey was faster (possibly because the tide would begin coming in) and probably because Trudie had already shown as most of the wildlife of interest on the way out. 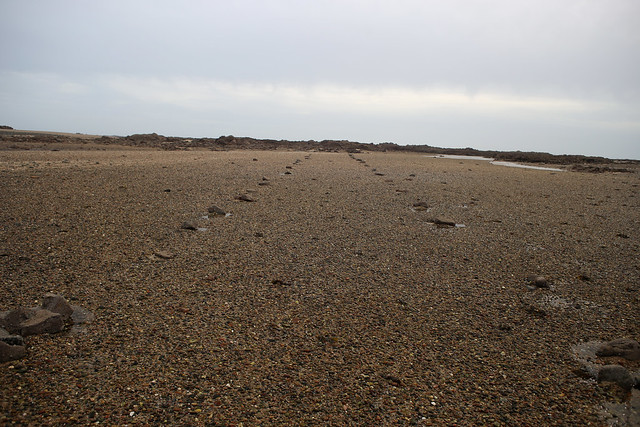 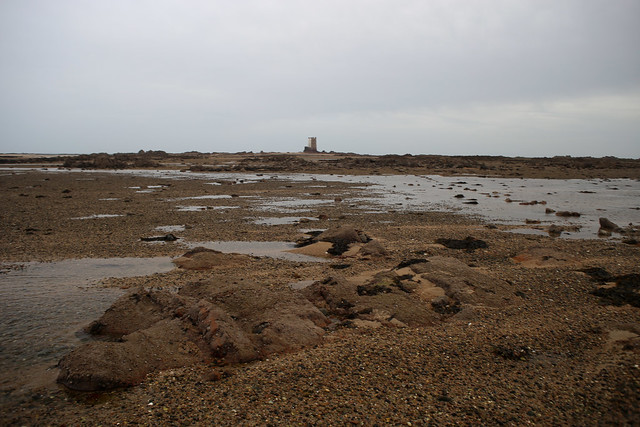 Soon we were back at the slipway and her van, where I swapped the hired wellies for my trainers. 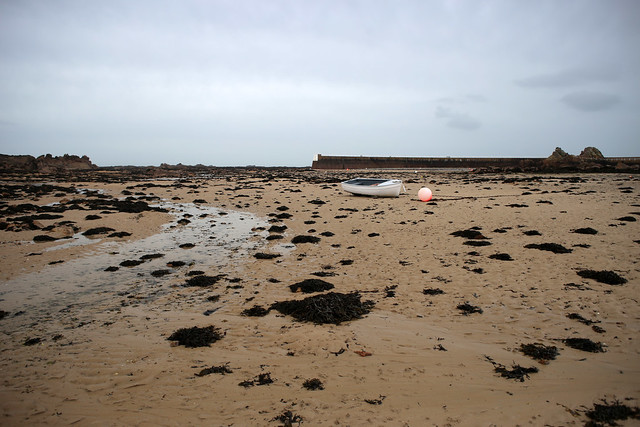 The other couple on the walk had also travelled here by bus, so we took the bus together back to St Helier. 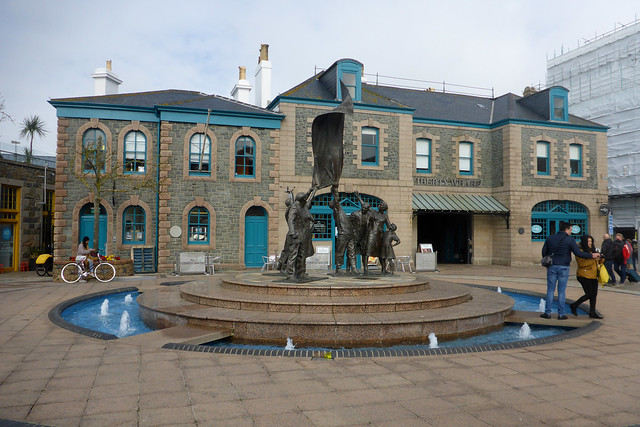 By now it was late afternoon, so that was the end of my walking for the day.

All in all I can highly recommend it, it was a very fun day and a fascinating walk.

2 Responses to Special: A walk to Seymour Tower, Jersey