When I walked the part of the Essex coast around Maldon in 2007 I came across Northey Island. The island is accessed via a causeway which I began to walk out, but a National Trust signed warned that there was no public access without a permit which had to be obtained at least 24 hours in advance. So I didn’t visit the island and planned to come back on a later date.

Roll on some 10 years(!) and that latter date arrived – I finally got around to visiting the island. The island is owned by the National Trust but it is not generally open to the public. Instead to access the island you either need to telephone in advance and make arrangements or attend on one of the (rare) open days (usually a weekend in September every other year).

To arrange access you need to telephone the warden of the island on 01621 853142 and make arrangements to visit. You should do this at least 24 hours before you plan to visit. Generally it seems to be possible to visit providing the warden is there and you can find a suitable time when the tide is low.

I telephoned on Friday with the intention of visiting on Sunday and this was fine. If you are a National Trust member, admission to the island is free, otherwise it is £2 (paid to the warden on arrival) and £1.50 extra if you would also like a copy of the leaflet and map.

Having arranged a time to visit I was told to report to the house on reaching the island. I drove to Maldon. It was a very hot day, with temperatures around 30 degrees and it was a hot and sticky drive up since the air conditioning in my car does not work very well any longer. I parked in Maldon at the Promenade Park as advised and followed the path along the shore south, as I had done on my previous walk. Since I was last here, the National Trust have erected a sign pointing the way from the main facilities of the park, which was handy. On reaching the salt marsh I stopped to put on some sun screen as it was mid June so I knew that I would burn quickly otherwise in the strong sunshine. This was those 4 weeks or so when it looked like we were going to have a great summer.

As I did so I watched a family head out to the marshes and start to walk into the mud to try to reach other areas of the marsh. It did not seem very sensible as they could easily sink into the damp mud! Having sorted out sun cream I headed over to the island, soon reaching the causeway. 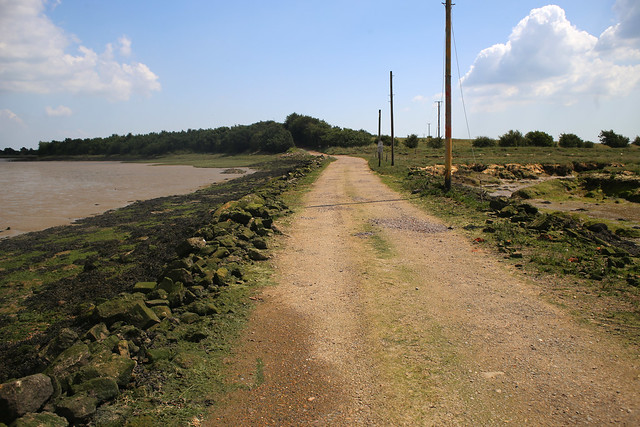 Inland the track meandered over fields. 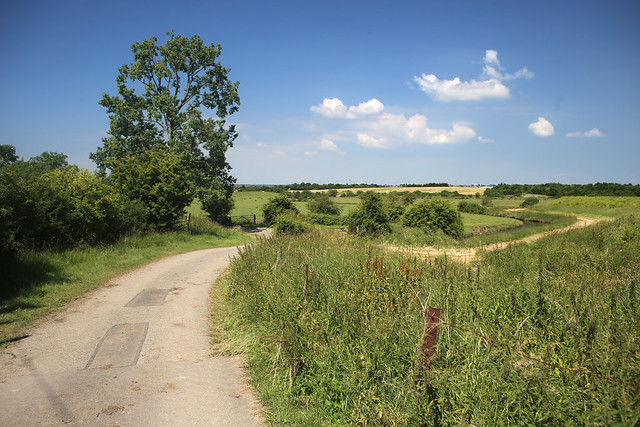 This is because the residents of the island can drive to the island. From the information leaflet I got on the island it seems the public used to be able too, since it showed a car park here at the end of the causeway but clearly it does not exist any longer. Though there is now an information sign, which also was not here last time I came. 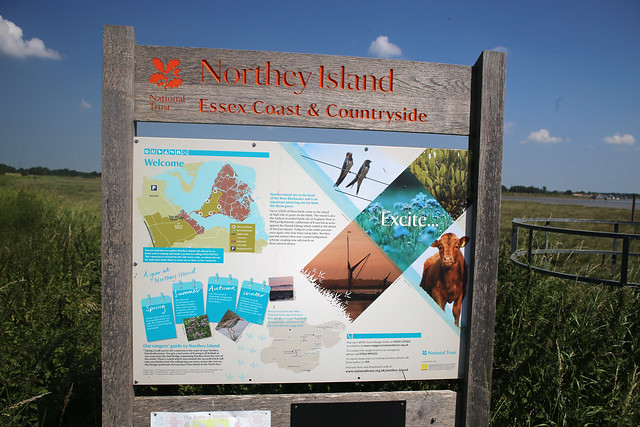 The tide was low enough there was no water even close to the causeway so I had no problem walking over, but there was plenty of sand and mud alongside. 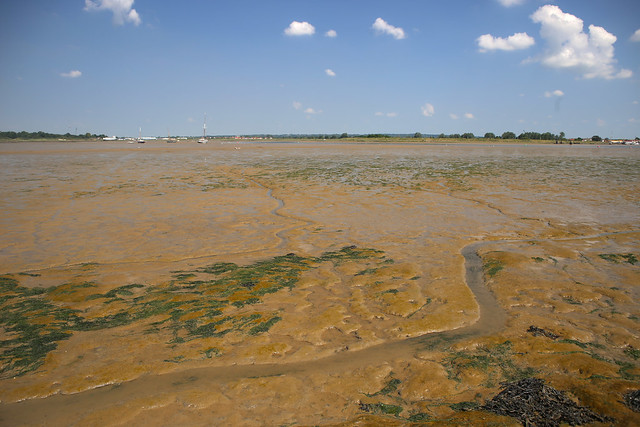 On reaching the island, a sign warns access is for permit holders only, which seemed a bit odd, as I didn’t have a permit! 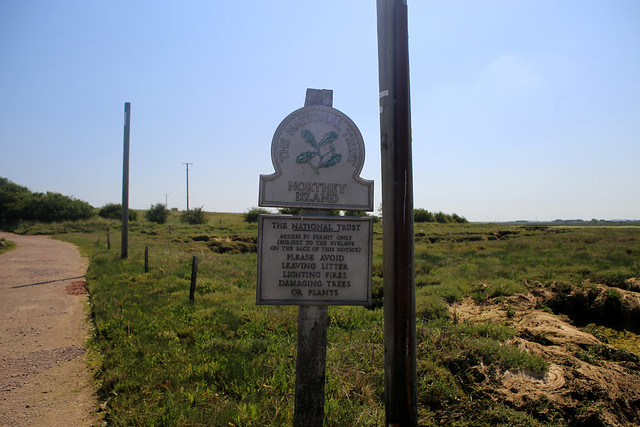 The track headed along the west of the island. Tree-lined, it provided welcome shade and there were enough gaps in the hedges on the left to provide fine views over the estuary, where I could see plenty of the pretty Thames sailing barges and other boats. 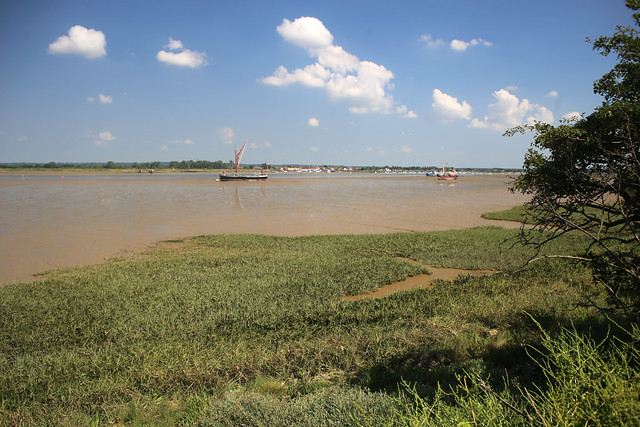 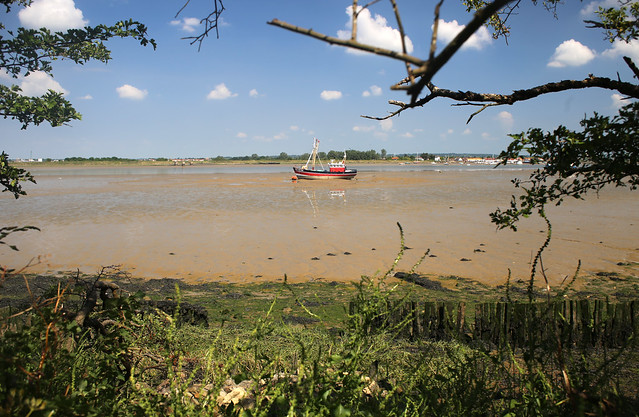 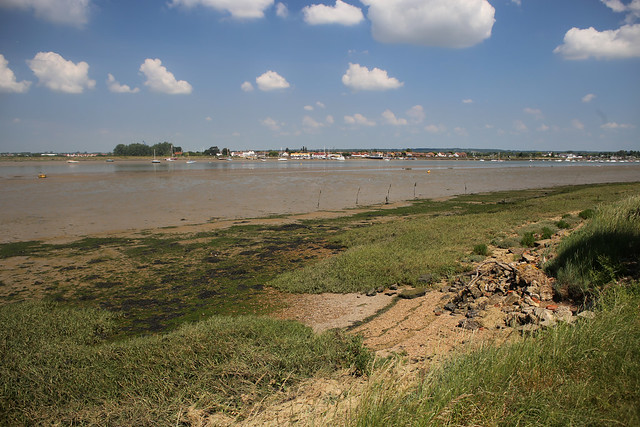 At the northern end of the island the track turned right and a barrier blocked off the salt marshes ahead, a sign warning it was dangerous. I was a bit surprised on reaching the house, that there was a pond on the right and an interesting looking stone wall around it, but the sign ahead warned this was private and that the path around the island went to the left. 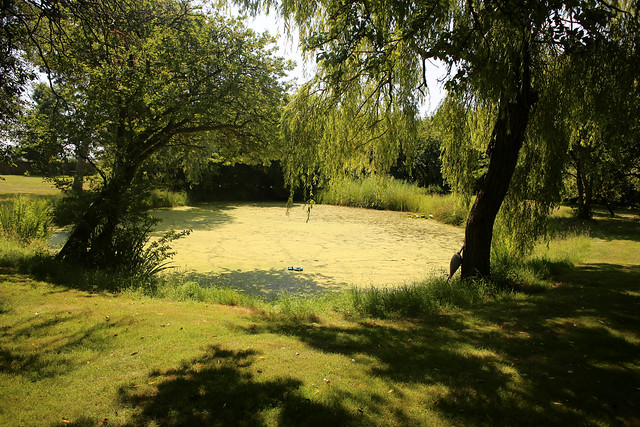 I started to follow this but the house was now to my right and I realised this must surely be the house I was meant to report to, to meet the warden. I headed back to the private sign and telephoned the number. This started dogs barking and I could hear them on the phone too once the warden answered, I was clearly in the right place!

She came out and introduced herself, took payment (I am not a member) and offered me a leaflet and map of the island for £1.50 which I took up. She also showed me the toilets I could use on the side of her house and offered to fill water bottles if I didn’t have any already (but I did). It was a nice welcome. I was then left to make my own way around the island and back to the mainland.

The island now is roughly ¼ of the size it once was. Originally sea walls were built all around the island, but these were breached during the late 1800s causing much of the island to flood. Now only the south west corner is protected by sea walls, the rest (around 3/4) is all tidal salt marsh now. 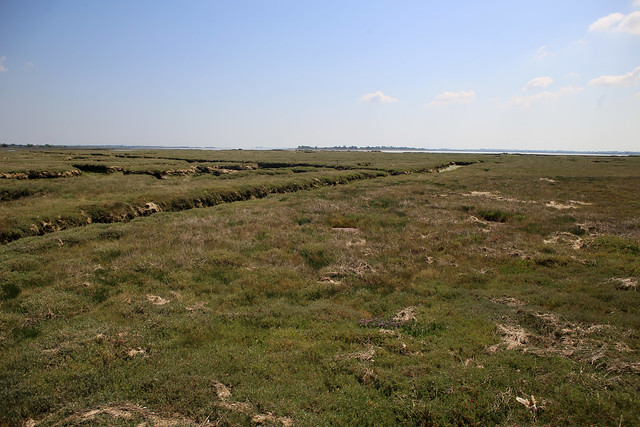 The sea wall path was easy to follow and had fine views over the salt marshes. I was passing intiailly behind the two houses. One the warden lived in, the other is used as a holiday cottage.

Soon I reached a brief part of the now dead-end old sea wall that could be followed ahead, but it was difficult underfoot so I soon gave that up. 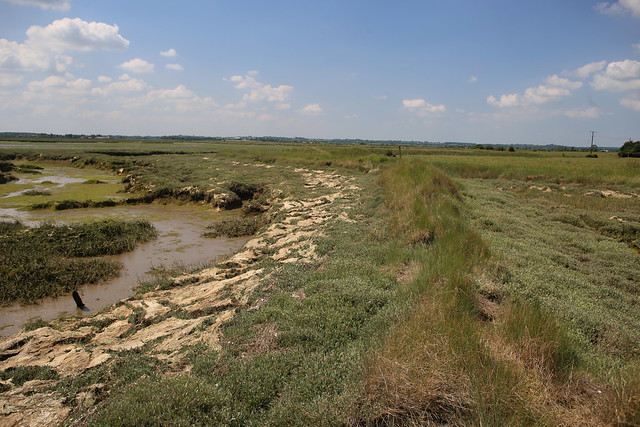 This side of the island was exposed to the sun, but I decided to sit here for lunch anyway, it was such a peaceful spot. Once finished I continued around the short path around the island.

On the south west corner of the island the origianl sea wall was moved back about 15 years ago to create more marsh – so the island is continuing to shrink! 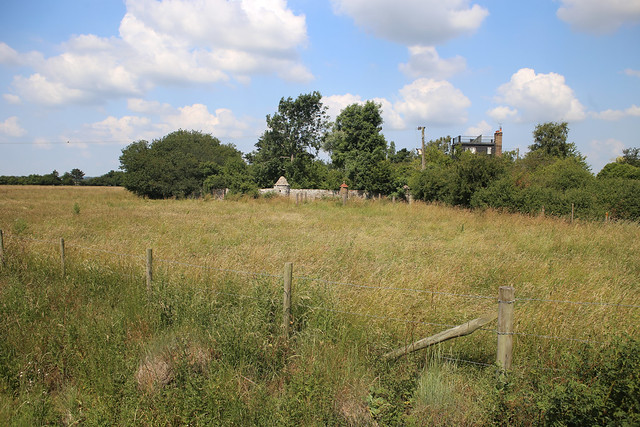 Cattle were grazing on the field here. Soon I was back at the causeway – the path around the island is only around half a mile. 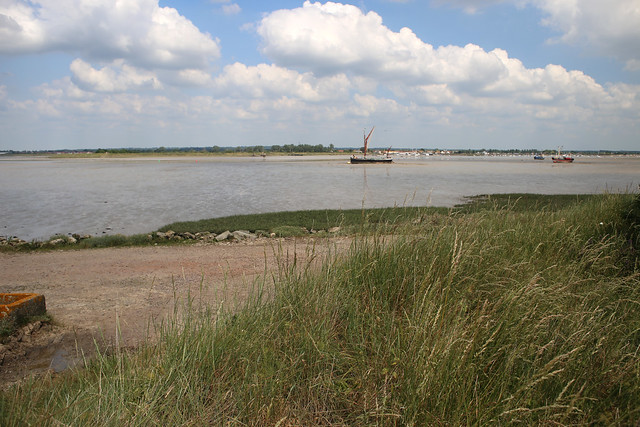 Having completed my navigation of the island I returned over the causeway and back to the mainland. This time I took a different route back to Maldon continuing ahead on the track to the farm (it’s also a a footpath) and going through the gate, then turning right on a footpath that headed back to Maldon. This took me past quite a lot of new housing over what was once fields. A shame to see ever more of the countryside being built over.

Nothey Island was an interesting little island, though a long way to come for a small place like this – which is why I then had a plan for the rest of the day, to head onto Wallasea Island. It was to be a day of island hopping! I knew that too had changed a lot since I first came here in 2006 and I wanted to see the difference for myself (you can see my post about Wallasea Island here).