More marshes was the theme for this walk. I did this walk in reverse and about 18 months earlier than my previous walk. The reason for this is that I had earlier had the idea of walking the Saxon Shore Way (before I decided to do the whole coast), which starts at Gravesend and it follows the Saxon route of the coast (where it is not lost to the sea) which means that in places it is more inland than the route I had walked. However I’m sorry to say that this walk put me off following the rest of that route.

I started by taking the train to Gravesend, first taking a train into London Waterloo and then crossing to Waterloo East for a train on to Gravesend. I soon wished I hadn’t. The train was in a dreadful state with graffiti scratched into the glass of every single window, making it hard to see out, missing and ripped seat cushions and the toilet was broken. To cap it all one of the (cardboard) adverts even fell from it’s slot onto my head when the train went into a tunnel because it caused a gust of wind through the train. It only served to remind me why I avoided travelling by train as much as possible in Kent (things have, thankfully, improved greatly in recent years, after the decay resulting from years of being run by Connex South Eastern).

Having reached Gravesend I walked through the town centre to the water front. Gravesend is not a nice sounding name for a town. After all a Grave is where you end up when you are dead and well that very much is the End, yes. It was a misty damp day but on reaching the waterfront there was a pleasant little pier. 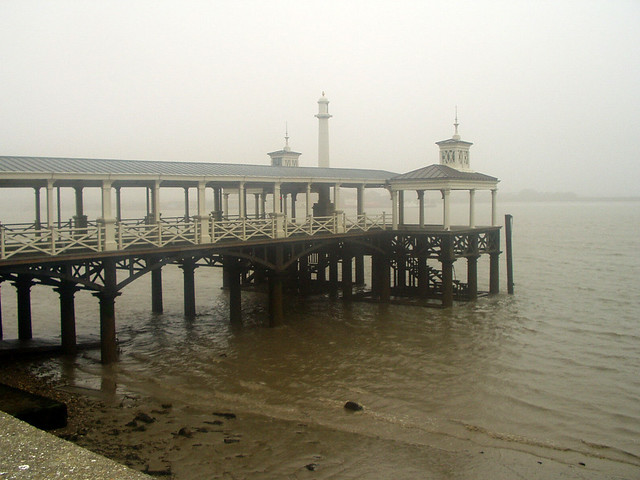 It serves a useful purpose too. Gravesend is actually the lowest point the public can cross the Thames from Kent to Essex. A passenger ferry service crosses the Thames here from Gravesend to Tilbury. The first crossing for vehicles is further upstream, at the Dartford bridge/tunnel that links the M25. Though pedestrians are not permitted on the bridge. The lowest point you can legally cross the Thames on foot is therefore the Woolwich foot tunnel. However a new ferry service is planned to run between Queenborough on the Isle of Sheppey and Southend which, if it is successful, will save future coastal walkers the need to walk through the industry and marshes beside the Thames.

The pier was located in a pleasant little square with a pleasant looking white clapper-boarded pub. 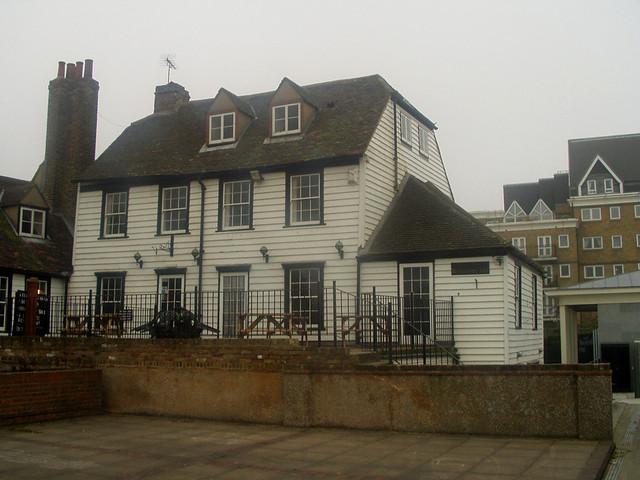 I set off east from here on a tarmac path next to the Thames and with a garden on the other side. Though the town seemed very neglected, there was a vast amount of litter on the path. 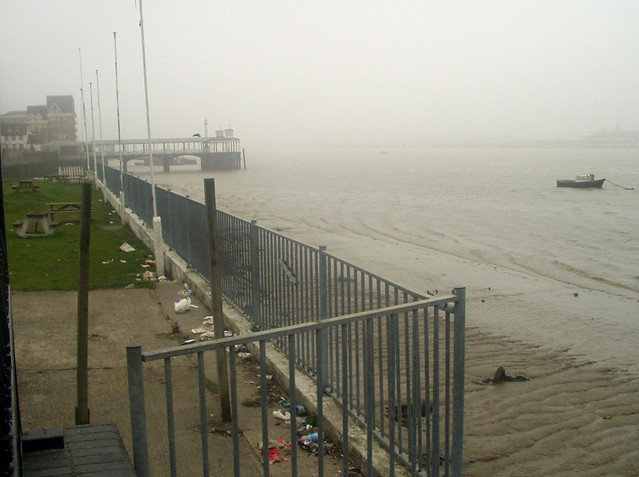 Ahead I soon came to another pier. 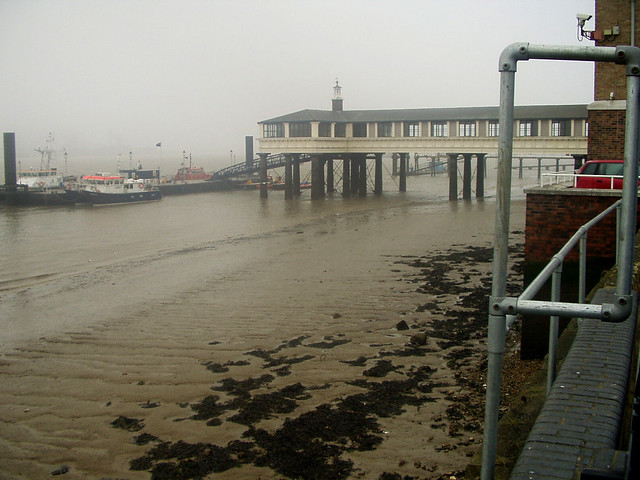 This turned out to be the Royal Terrace Pier. It is owned by the Port of London Authority. I walked past the entrance to the pier, alongside a rather ugly office building used by the port authority. 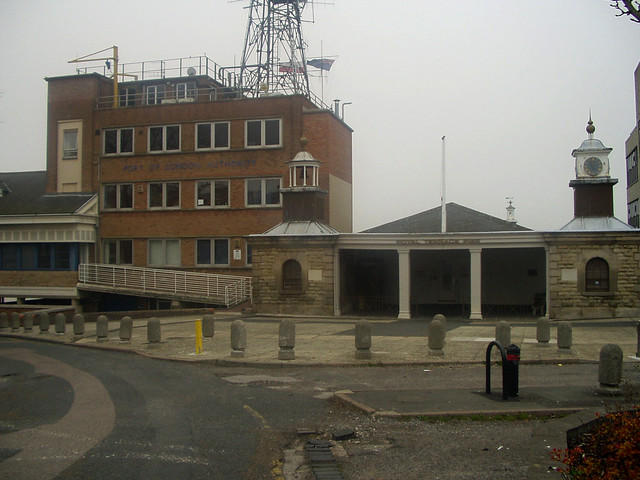 Sadly I had to turn inland here as the road ahead was a private road with barriers across leading into the port area. Thankfully the inland diversion was short and soon I could turn back onto the coast to what was the New Tavern Fort. It was originally completed around 1783 and used during numerous conflicts, including World War II. Now it is open for the public to wander about and it was an interesting place with many of the old guns still there. 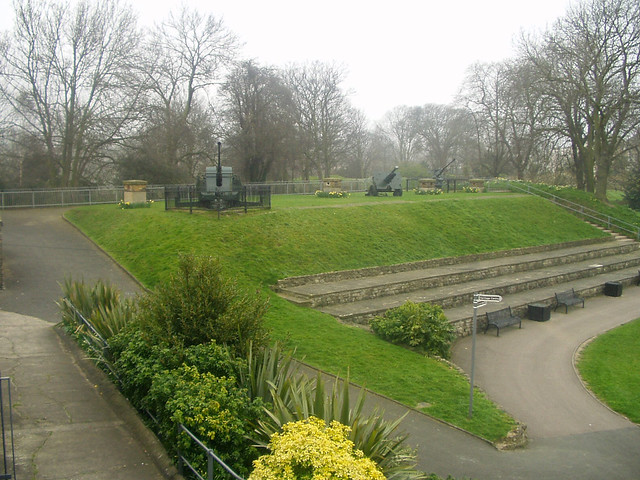 At the end of this the path passed the entrance to a marina and then entered an industrial area and … oh dear. This was one of the grimmest paths I’ve ever walked. 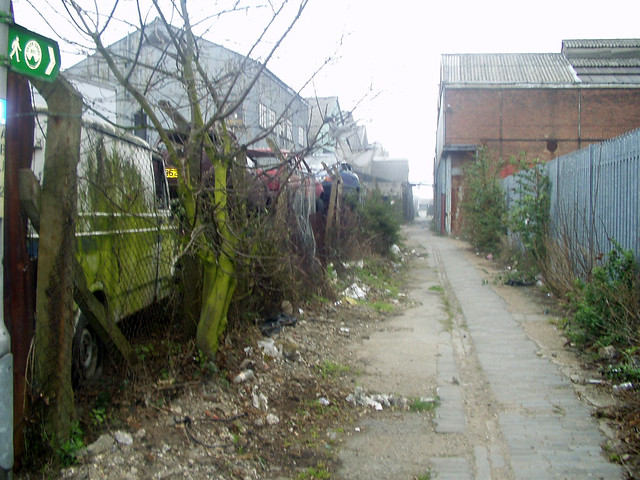 A litter strewn path past run down industrial buildings and car scrap yards (you can just see the Saxon Shore Way sign at the top left).

I hate paths like this, as areas like this tend to attract all sorts of dodgy characters, as well as vandalism and there is nowhere to escape, hemmed in with fences on both sides. I was glad to emerge unscathed into Wharf Road. Though this too, was grim. Again, surrounded by industry, dirt and dereliction. At the end of the road I could turn left onto another industrial road and follow a path past more jetties and industry. It was a horrible path but it did bring me back eventually to the shore. 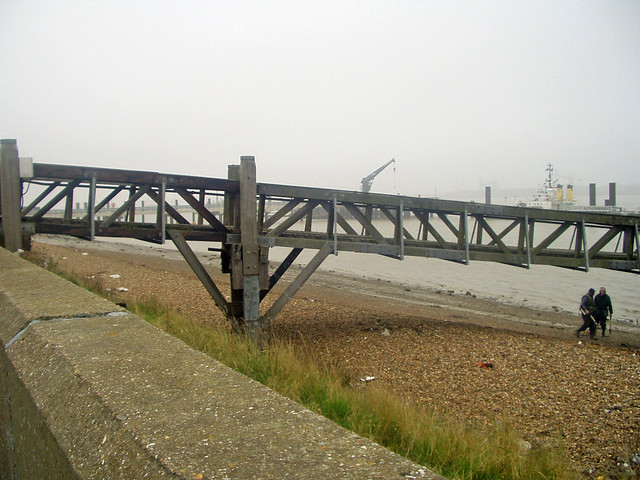 Here there were numerous piers and jetties used for what I’m not sure. Underneath them was a shingle beach where some people were searching it with metal detectors. I don’t know what, if anything, they might have found.

Soon the path became green on the landward side, with a thin strip of grass alongside the water, though industry behind it. Past what looked like an electrical sub-station (probably connected with Tilbury Power station on the opposite bank) and suddenly the industry ended and I was in open marsh land. 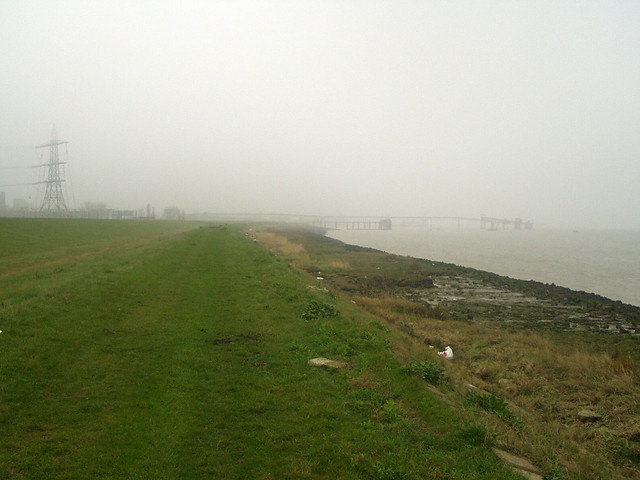 However I was still somewhat hemmed in because to my right only a few metres inland from the path was the Eastcourt Marshes firing range. The path along the shore is just outside the range and is open all the times as far as I know, but the range did not appear (or sound) to be in use, probably because it was Saturday.

I continued on the now peaceful riverside path though with the mist there was little to see initially. After about a mile I reached Shornmead Fort. 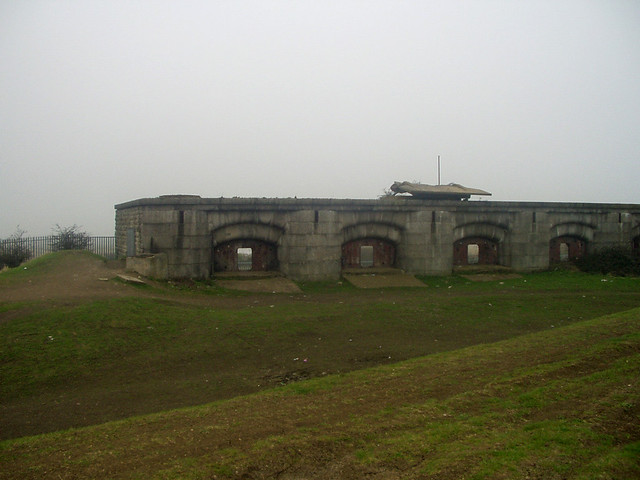 This was an old military fort built in the 1860s which is now disused and derelict. What is here now is a small fraction of what was once here because many of the buildings were demolished in the 1960s. It was last used during World War II.

Beyond the fort I soon reached a small lighthouse out in the estuary, Shornmead Lighthouse. 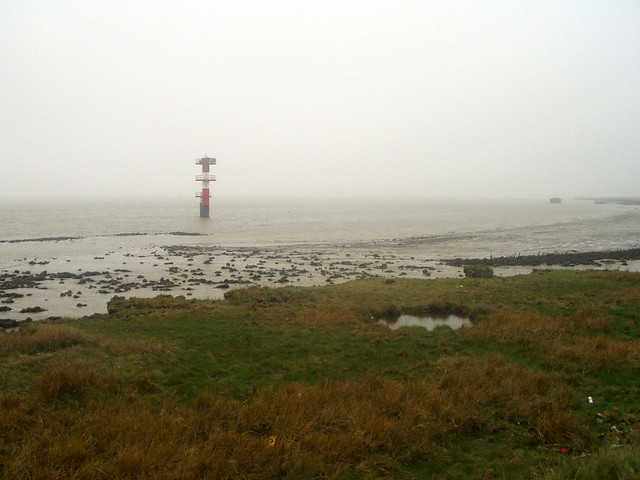 The tide was now going out to reveal the mud flats of Shorne Marshes Nature reserve. Though there was little wildlife to be seen. 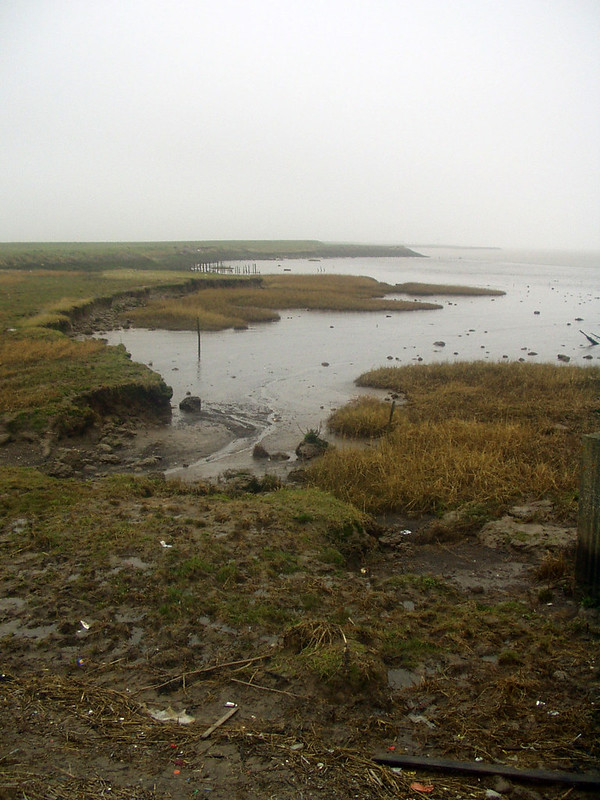 Past the nature reserve the path soon turned left with the shore and became almost a causeway. To my left, the mud flats and water of the Thames whilst to my right a man-made lake has been formed by gravel extraction.

I continued on the path and soon reached another derelict old jetty with all sorts of bits of wood rotting in the estuary. 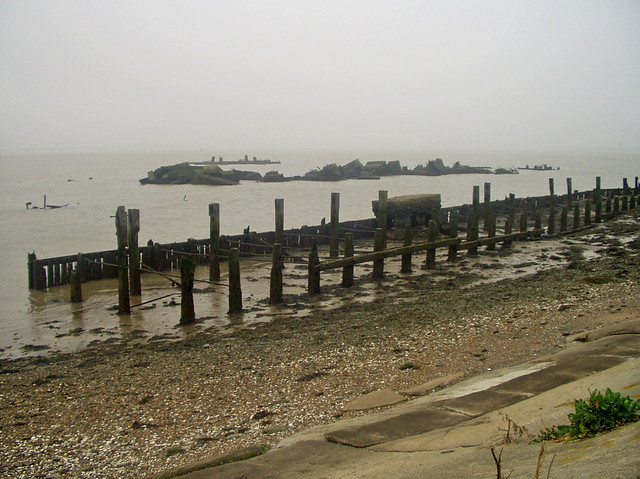 Just past the pier there is the obvious remains of a wooden boat. This turned out to the remains of Danish schooner, the Hans Egede. It had been used as a coal barge and sunk here whilst being towed. 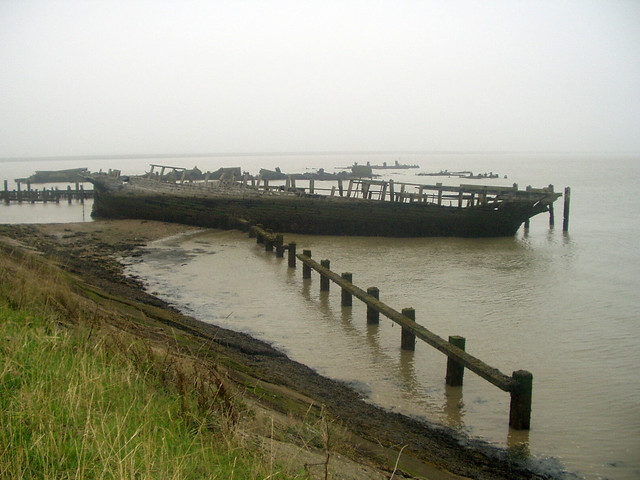 Just past the ruined boat I came to another much larger fort, Cliffe Fort. This was also built in the 1860s. It too is derelict having being last used during World War II. 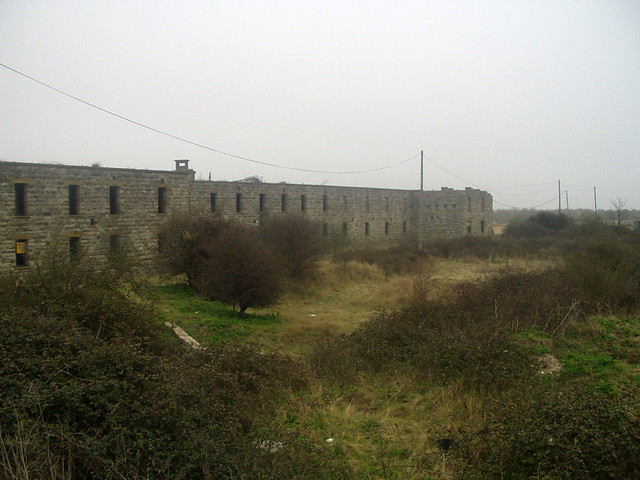 It was purchased by the owners of the gravel works nearby and is now flooded inside. The path was now squeezed between the front of the fort. I was tempted to take a closer look at the fort, but just beyond it was a large pier. 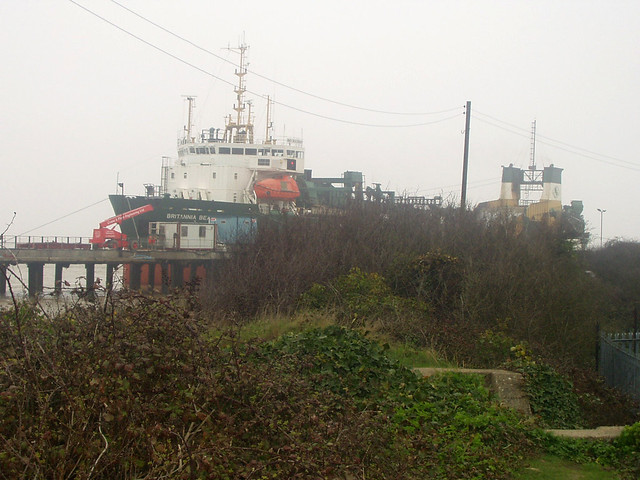 Here the aggregates company use the pier to load onto boats for onwards travel. To my surprise (given it was Saturday) this process was happening just as I happened to be passing, with a large ship being loaded up and high-vis jacketed men about. 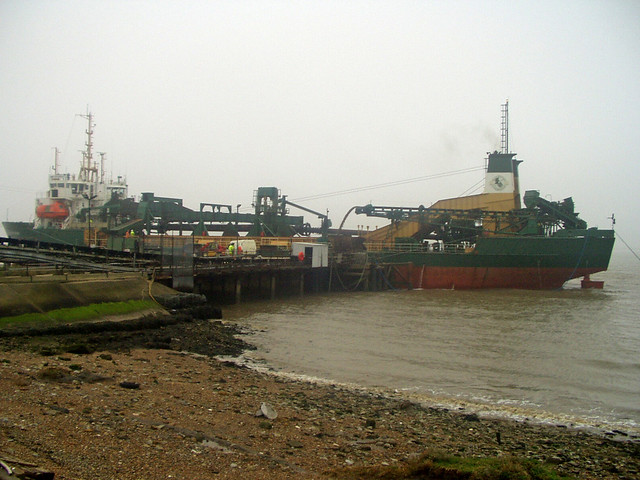 So I decided against any attempt to explore the fort further, since I was likely to be spotted. 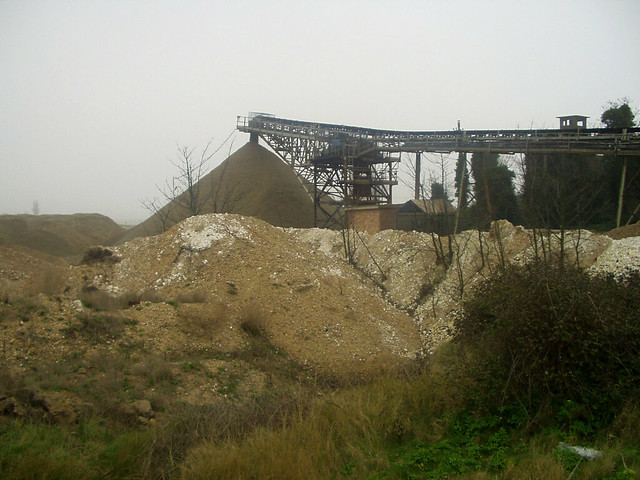 The industry ended abruptly and the path then continued behind a concrete sea wall, turning to end up on the south side of Cliffe Creek. 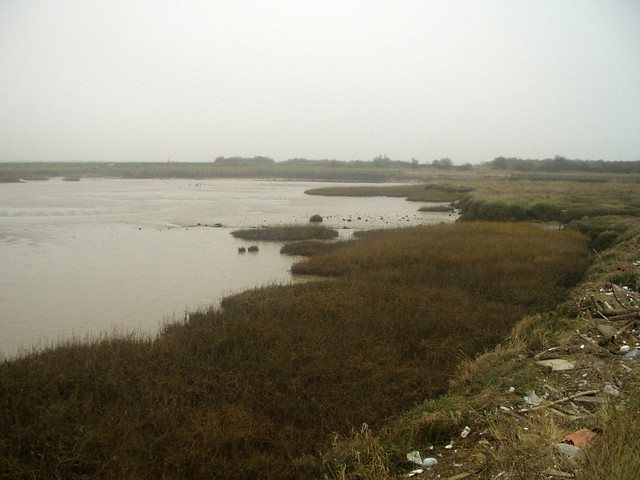 As before, it was a shame to see the huge amount of litter washed up beside the banks of the creek. At the end of the creek I turned left with the path to what was obviously once an area of industry (probably further gravel works) and turned right on the track between the lakes formed from this work, now Cliffe Pools Nature Reserve. The track was mostly between trees and I followed it to Allen’s Pond and ahead on the track called Pickle’s Way.

This leads into the village of Cliffe where I passed a run-down looking pub (The Victoria Inn, since closed) and then the pleasant white clapper-board buildings of this attractive village. 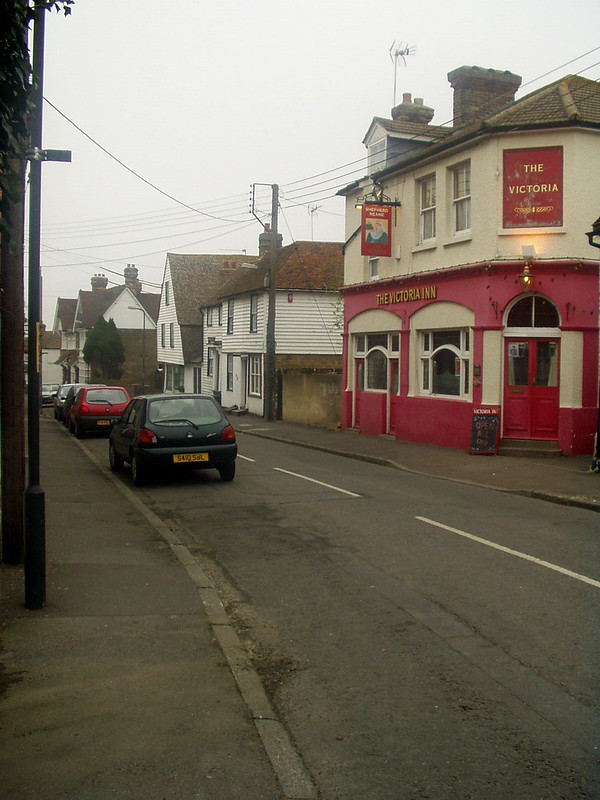 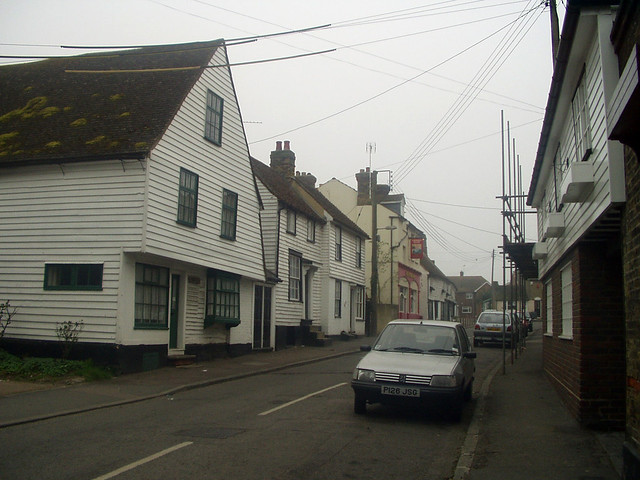 This time as it was actually earlier than the last walk I wrote up, I was able to see the attractive church, free from scaffolding. The stone work was unusually striped and the walls castellated. It is a beautiful little church. 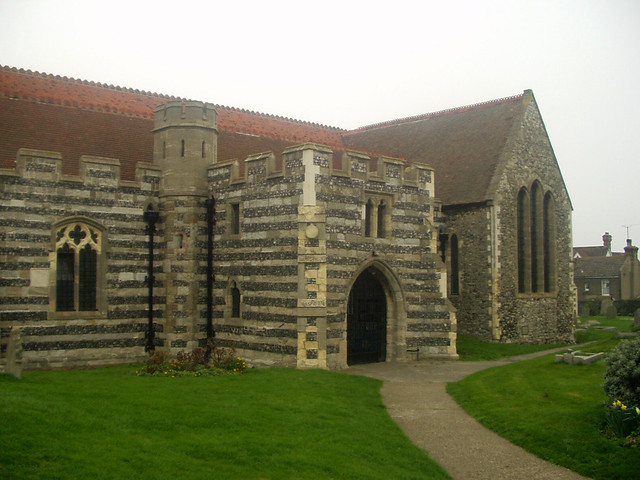 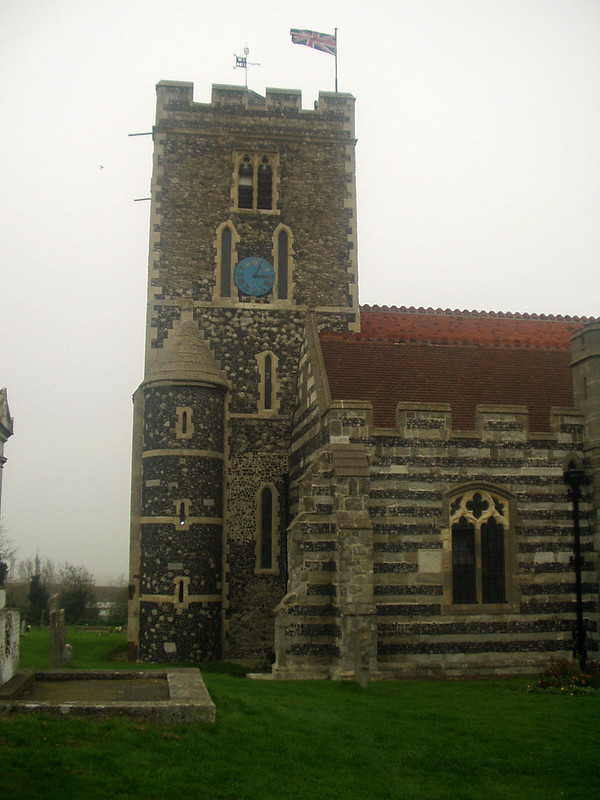 I was glad to have walked in this direction, as the walk got gradually better rather than gradually worse as it would have been had I been walking towards Gravesend. From here I took the bus to Strood, a little further along on the same line as Gravesend and from there take the train home (no adverts fall on my head this time, at least!).

This was not a walk I would choose to repeat, especially around Gravesend, but even in this unpromising area there was a lot of interest such as the old military forts. It’s just a shame they are not being cared for.

Otherwise take this bus and then the train.

Here is the complete set of photos for this walk : Main Link | Slideshow

1 Response to 163. Gravesend to Cliffe