After my industrial walk last time I was pleased to see that this walk was more rural, though I still had some road walking to endure first.

I drove to Lower Stoke and parked in the car park there. Lower Stoke was a pleasant little village and I followed the road north through the village. Sadly, as I had expected once I reached the end of the village the pavement ended and the road narrowed. This is one of two roads to Allhallows-on-Sea, which is not that big a place but as I later found has many caravan sites. Although late in the season these still seemed to be generating quite a lot of traffic.

The road started off quite open, with fields on either side and no fences, which at least meant I could easily step off the road when traffic passed. Later however the road was enclosed with hedges which made it less pleasant to walk. I reached some houses which I initially thought was the edge of Allhallows, but there was no pavement and soon they ended. It was a bit further before I reached the village and the safety of a pavement. I was glad to get the road stretch over.

At Parkers Corner I turned right to continue on the road towards Allhallows-on-Sea. Technically a separate village to Allhallows I think, but they had merged together now. After a while I came to a bend in the road and ahead was the Allhallows-on-Sea Leisure Park (a caravan park). The map showed a footpath leading through this to the shore line. I passed the main buildings on the right and passed chalets on the right – not something you see many of these days. I was not really sure of the correct route so just kept going in roughly the right direction until I reached the sea. The route I took seemed to be the dividing line between the caravans on my left and the chalets on my right. I wondered if there was some kind of hierarchy and which was considered better. 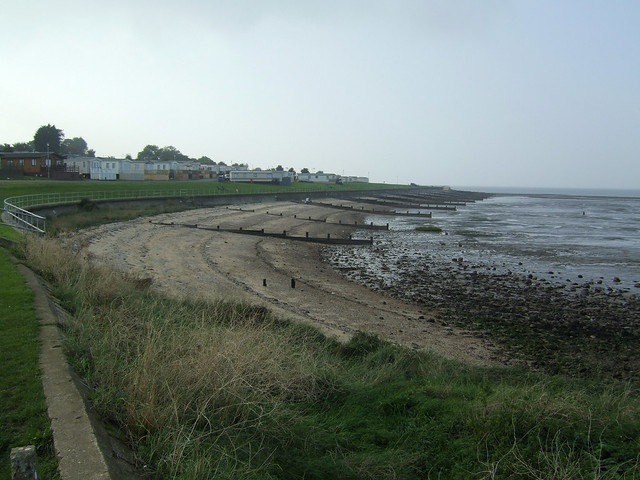 I was pleased to finally reach the sea. Though to be honest it was not the most inviting. A mixture of sand and shingle which soon became a mixture of mud and sand at low tide. 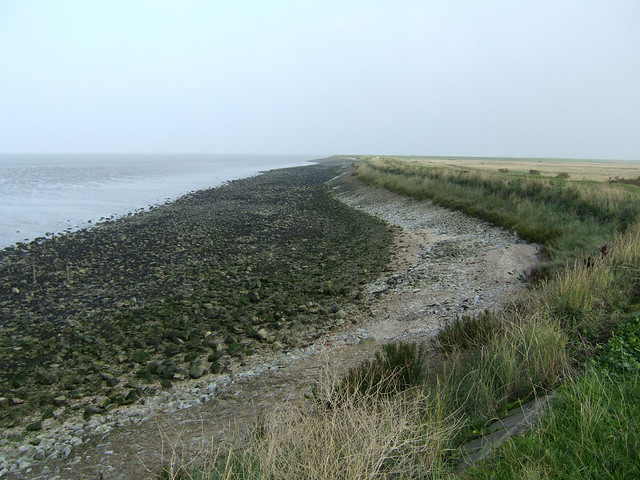 It was not the nicest beach I had seen and I did wonder why so many people wanted to holiday here. Yes it’s by the sea, but it is certainly not the nicest part of the Kent coast and there is very little else of interest nearby, it is quite an isolated place.

At the sea wall I could turn left of right. To the right a loop of paths headed east over the sea walls of Allhallows Marshes and the Yantlet Creek. This was a dead end but I decided to walk it anyway and make a loop back to Allhallows.

The path passed a fishing lake which some of the chalets beyond overlooked. 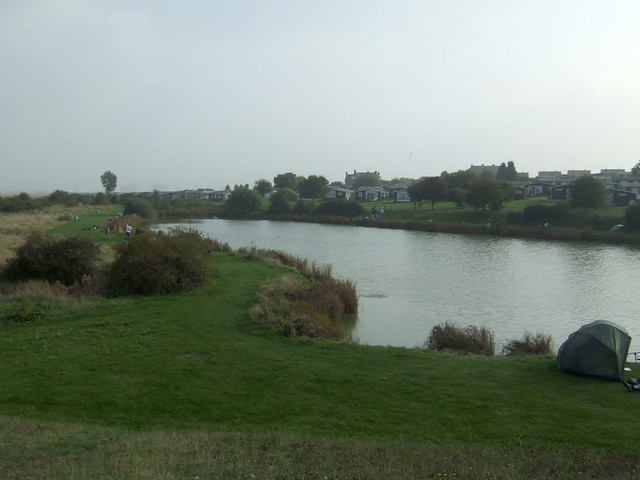 The beach soon ended and I was then next to a concrete sea wall with rocks and marshes between that and the sea. It was quite misty, but I could still see some of the industry ahead. 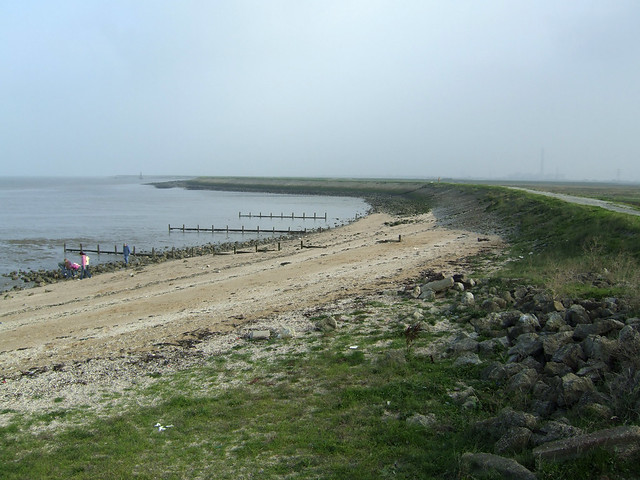 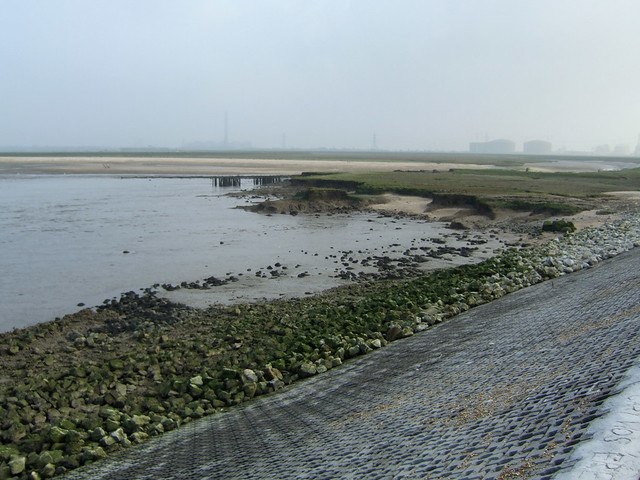 Soon I turned to the right to follow the banks on the western edge of the Yantlet Creek. Here the coast was a mixture of mud and sand and I passed a memorial to a man who had drowned here in the 1970s. I wondered if he had got stuck in the mud or had tried to swim across the creek. 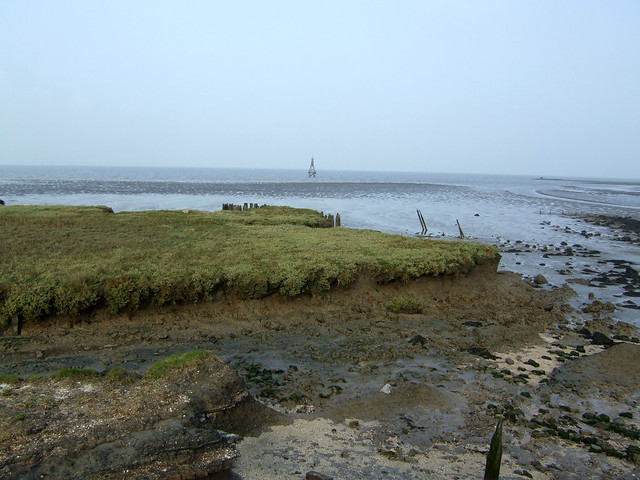 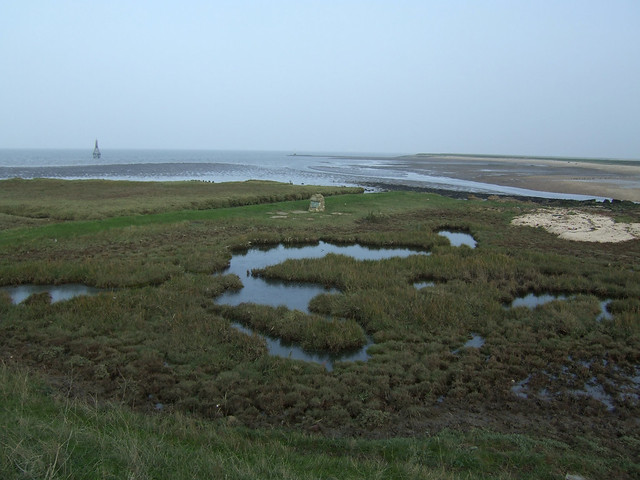 The mouth of the creek was marked with a couple of strange towers which looks like they may once have been lighthouses but neither seemed to have a light now. 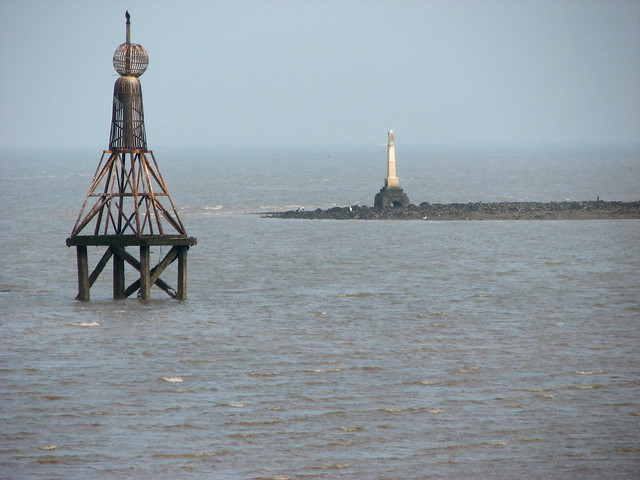 The Yantlet Creek was a muddy creek with just a tiny trickle of water close to the bank on my side. I’m sure at high tide it would be prettier than the mud flats I had. 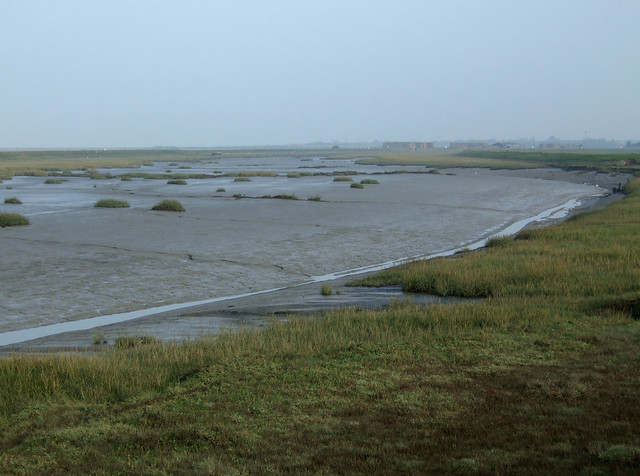 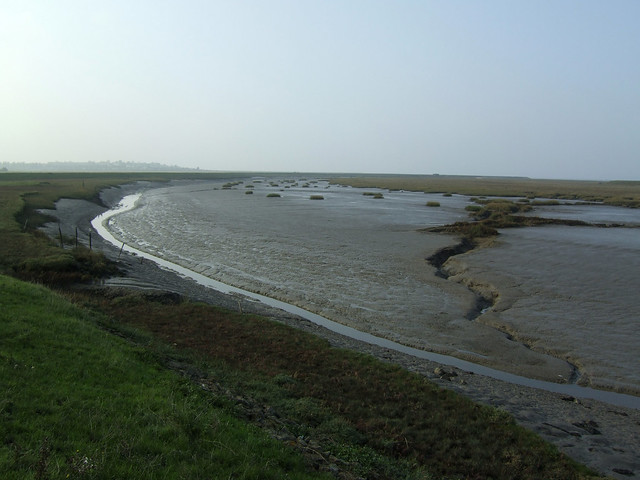 However I did spot a heron fishing on the mud banks. 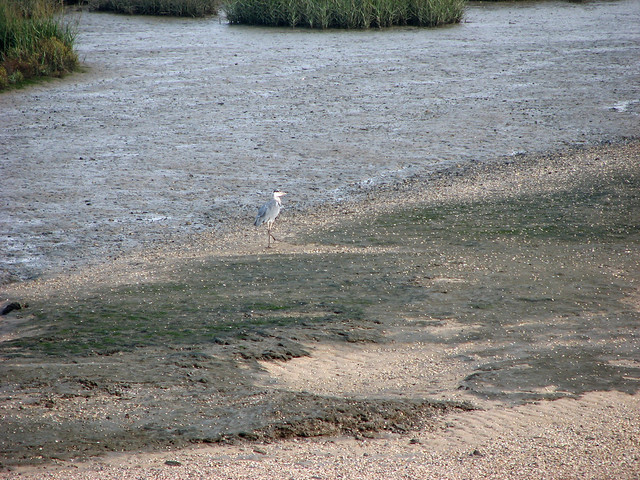 On the other bank was a farm, un-named on the map, that had an impressive collection of hay bails. 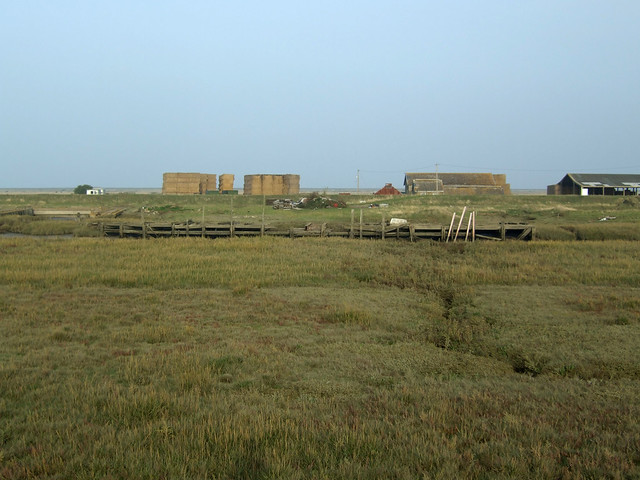 I continued further up the creek, which was now narrowing. To my left was grass though the undulations in the grass did not look natural, I suspected there had been some sort of industry here in the past. 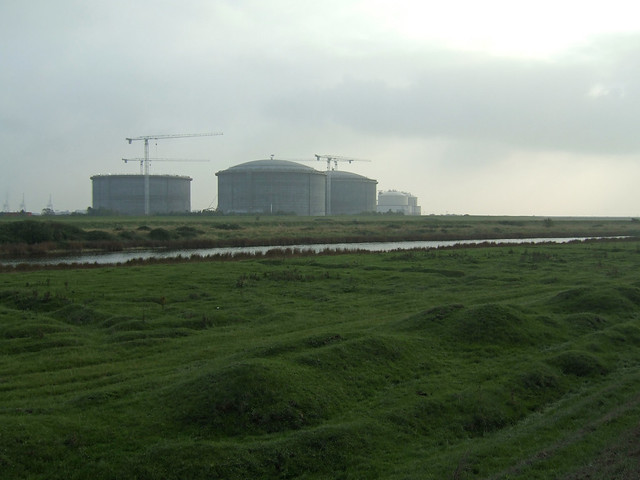 On the other bank there still was, with the circles of the gas works or whatever it was I had passed last time.

I could not keep to the bank for much longer. Ahead the path turned inland along the “Old Counter Wall” which I suspected was an older sea wall. The land to my left was now a boggy muddy marsh so I was glad of the slightly raised path. I passed under power lines and then turned left beside another marshy creek. A short distance ahead was a junction of paths.

The route straight ahead was a dead-end and took a convoluted route almost double backing on itself before coming to an abrupt end. It was about a mile to walk there and back and given it was a dead-end path that did not go anywhere I suspected it was rarely used and therefore likely to be blocked or difficult to use. So I decided instead to turn north and follow the other footpath over the marshes to take a slightly different route back. This rounded the western edge of Hooks Fleet and then turned right along the winding sea wall along it’s northern edge. 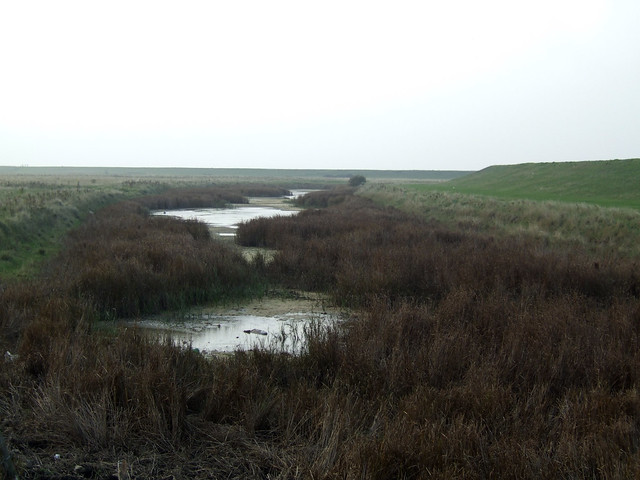 Continuing east as I was now only about 200 metres away from the path I had followed on the way in.

It was tempting to try and cut across the marsh back to it since I otherwise had about a mile of walking to get there. But the marshes were wet and boggy, so I stuck with the path. So I followed the big loop back over the featureless marsh to rejoin the path I had followed to get out here. I did wonder what the marsh here was used for. Often there are animals grazing, but there were none here, though perhaps it was too late in the year for them now.

I headed back the way I’d come, past the memorial again and back to Allhallows-on-Sea. For the sake of variety I turned left on another path just before the start of the beach which took me a little inland and to the end of the road.

This took me to a car park and a huge pub. I guess in the summer months with all the caravan parks here it does a good trade and so this is why it was big.  Though it did look rather run down. 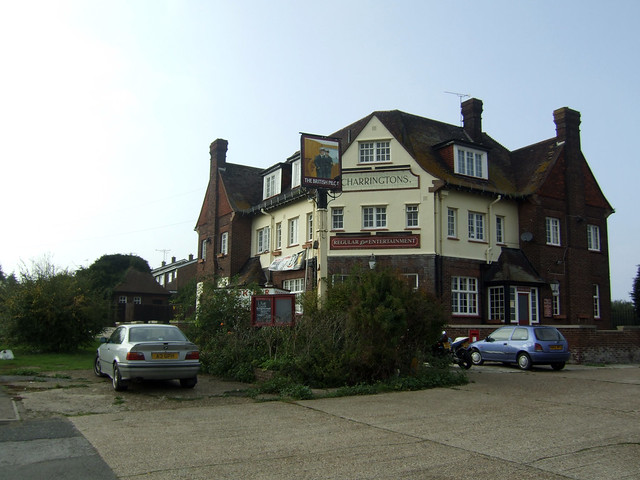 I followed this road back to the entrance to the caravan park and here I had completed my walk. Although only a short walk this time but this is because the path west from Allhallows-on-Sea runs for around 14 miles before it comes to the next town or village. That was far too far to contemplate today so that would have to wait until next time.

Irritatingly I had a little under 40 minutes until the next bus. It would probably take less time to walk, but I wasn’t very enthused about walking back along that road again. Rather than wait by the bus stop, I headed back through the caravan park to sit on the sea wall for a while until the bus arrived.

In fact as I approached the road and thought for a minute I had missed it but then realised it was going the wrong way – it headed up to the end of the road to turn around.

I had enjoyed this walk more than last time and it was nice to see the sea again. The marsh sections were pleasant, but not very varied and I had been walking beside a lot of marshes on recent walks. I was beginning to miss cliffs and hills though – this part of North Kent is incredibly flat!

Here are details of the public transport needed for this walk.

2 Responses to 161. Lower Stoke to Allhallows-on-Sea