This walk took me along the south coast of the Isle of Sheppey, but it certainly was not without it’s challenges! 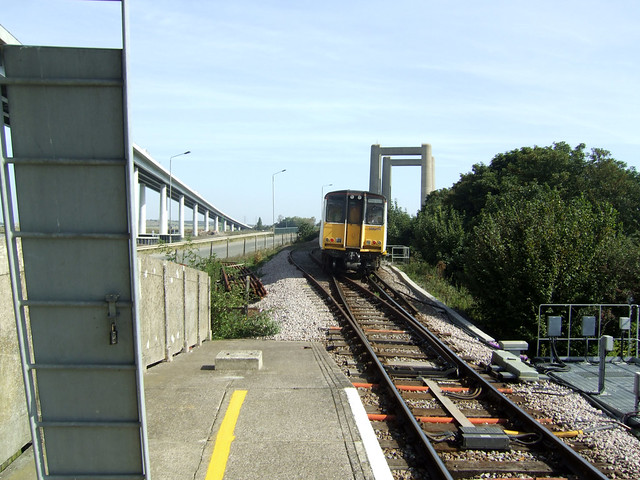 Swale station is at the south end of the old Kingsferry Bridge. The railway tracks go along the right hand side of the bridge. The station platform is on the left of the tracks and the road left of that. So first I had to cross onto the Isle of Sheppey. 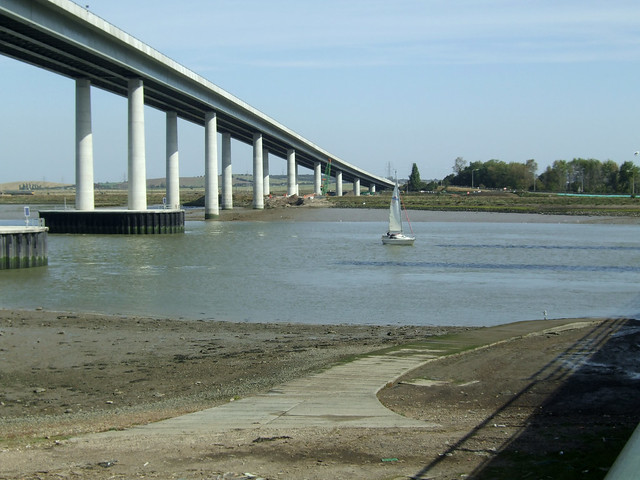 Problem number 1 then was that just as the train passed, the bridge began to lift, so I had to wait for the bridge to raise and go back down before I could cross onto the Isle of Sheppey. A single yacht went through and you can see the few cars queuing on the road on the other side. So I had to wait for the yacht to pass and the road to come back down, so I could cross over. 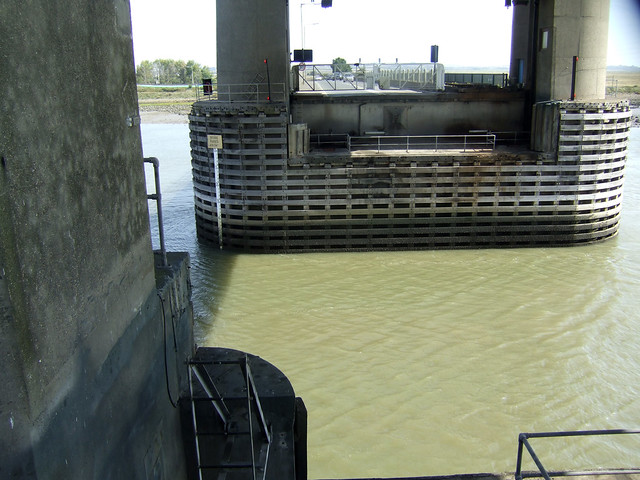 The second problem was that once over the bridge, I wanted to turn immediately right to follow the path along the sea wall, which I hoped might be possible. But the railway line was in the way. So I had to follow the road north. Thankfully it did have a pavement and with the opening of the new bridge, there is now little traffic using the old bridge (which is now a B-road). The road I was on crossed the railway and then ran alongside the A249.

So I was over the railway line but still heading inland. There was a track to my right, a couple of hundred metres away that I needed to follow back to the shore, but there was no path over to it and a man-made water channel to my right, which I would have to get across. So I had to stick to the road to Straymarsh Farm on the right. I had walked about 1 mile now, but was now almost a mile inland! Once on this road (called Ferry Road I noticed, so presumably it led to what was once a ferry), I could fork right, away from the farm and head back towards the shore. 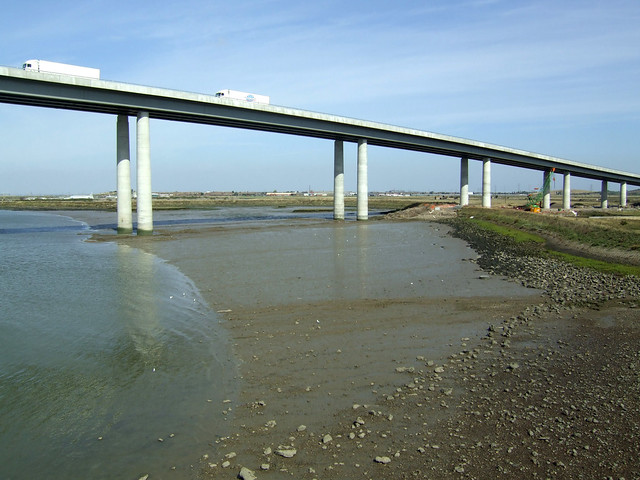 I followed this track (a road, really) for almost a mile back to the shore beside the Kingsferry Bridge, where there was a slipway for what was presumably the ferry before the first bridge opened. I had walked about 45 minutes now, to end up about 200 metres from my start point! Still at least I was back beside the shore now.

The path passed a large pond on the left, man made I suspect and the other way I could look back over the twin bridges linking Sheppey with the mainland.

Passing the pond on my left, I now had a largely featureless landscape – Minster Marshes, with some pylons and the power lines in the distance. 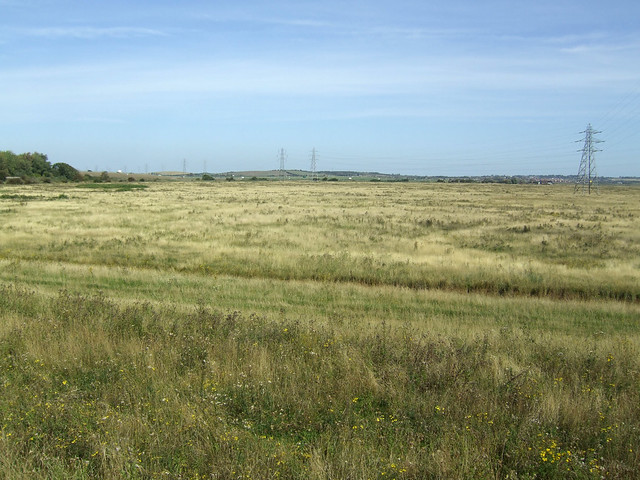 The path was easy going though, short grass on a raised sea bank and being late summer, the path was dry underfoot. I watched the train trundle back over the bridge, heading for Sheerness. 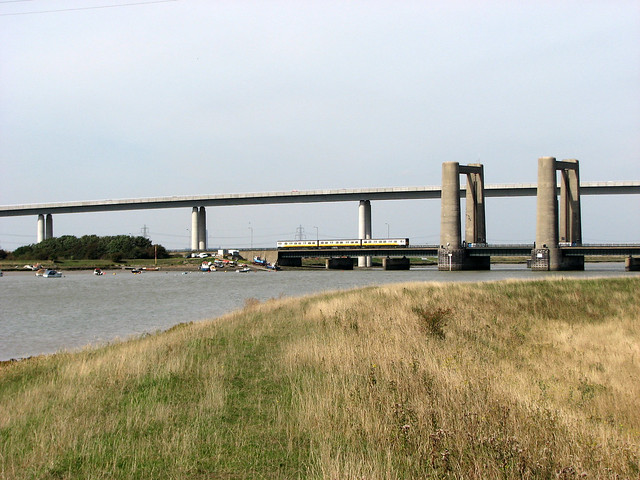 Ahead I was coming to a little inlet of some sort. Clearly man-made the sides were straight and the stream inland seemed to have been dammed.

Across the Swale I now had the industry of Ridham Dock, with piles of aggregates and the cranes presumably used to unload the ships that dock here. Being Saturday, all was quiet today though. 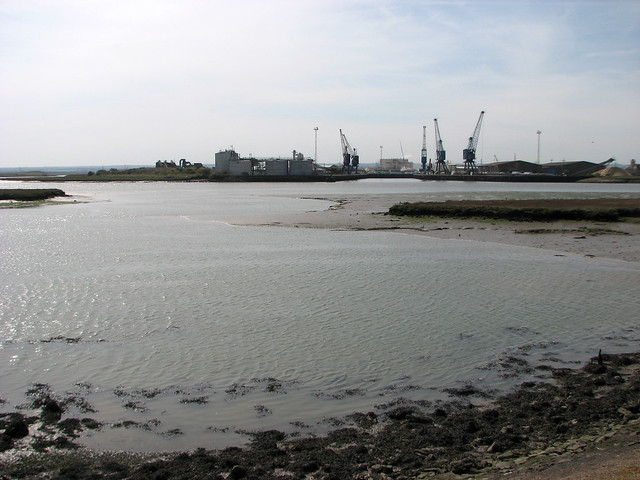 Rounding the dock the path continued on the sea wall, now dead straight. 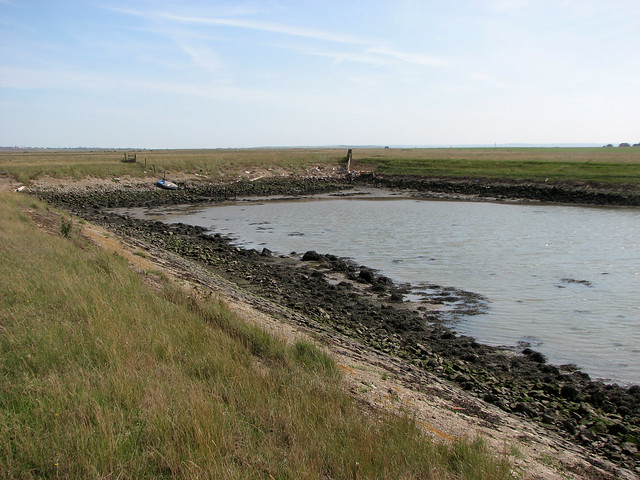 Out to my right a large ship was passing showing a registered port of “St Johns” which I’d never heard of (it turned out to in the West Indies, a “flag of convenience” I suspect). 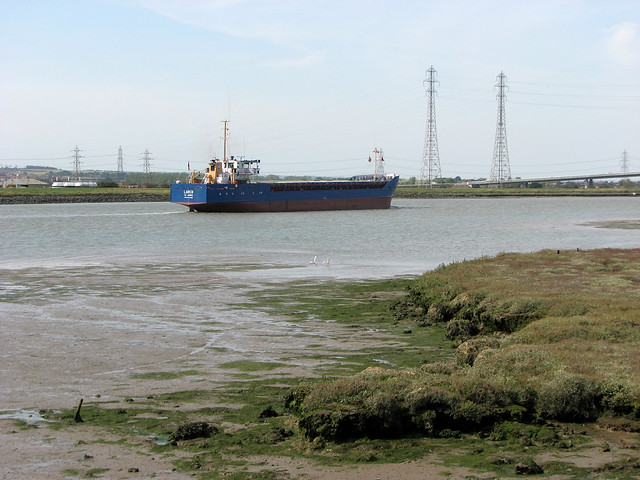 The landscape to my right continued to be dominated by the ugly industry of Ridham Dock, however I was now beginning to get areas of marsh on my right, too. 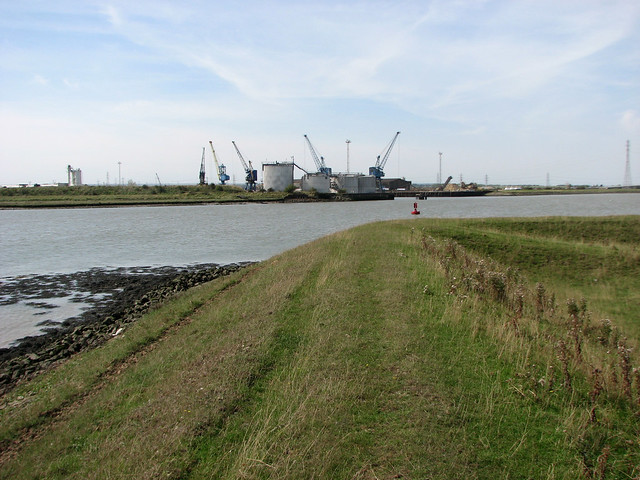 For a while I had water on both sides, a flooded area of marsh to my left and the Swale and marshes alongside it to my right. 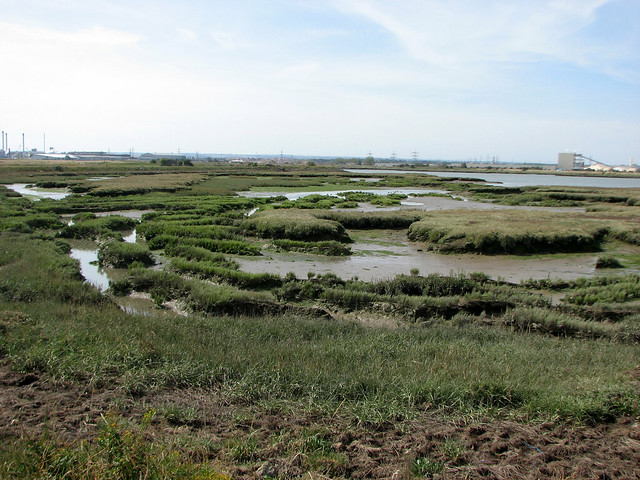 I soon came to another man-made little dock. This one had crumbling concrete sides, a rotted jetty and the decaying skeleton of an old wooden boat. Whatever activity used to take place had long since ceased. 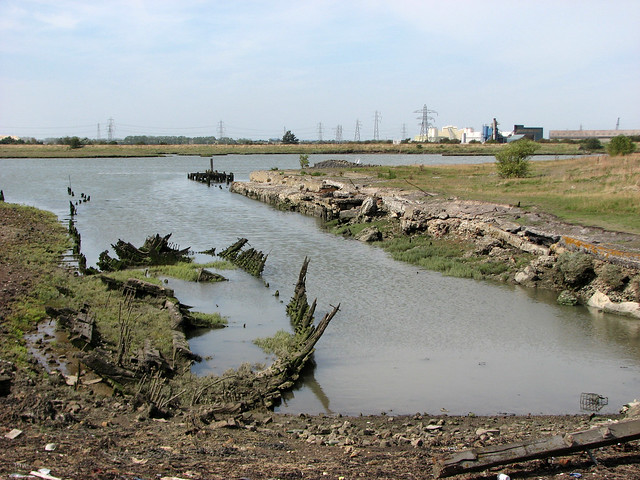 I was lucky with the tide, as it looked to be high tide, just grasses popping up above the water to my right, making for interesting patterns. Much better than mud flats, anyway! 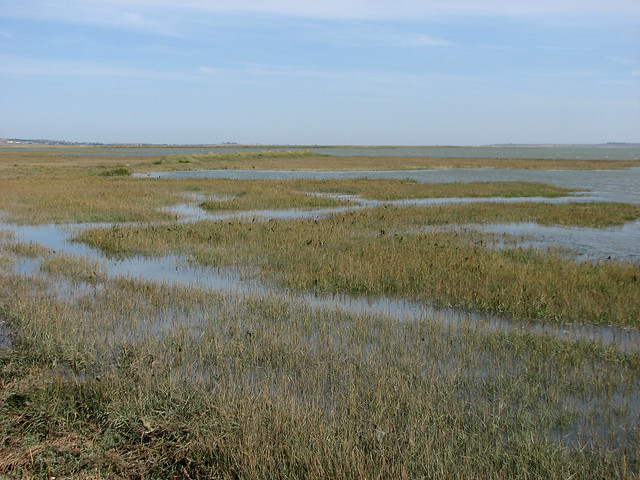 I rounded this little dock but sadly this marked the end of the path along the sea wall. I headed inland along the bridlepath along the south side of this old dock and the stream leading to it, heading inland. At the end of the water on the left, a footpath turned off to the right. heading for what looks like an old slipway (perhaps another old ferry crossing). I set off along this boggy path over the marsh. The going was easy enough for about 500 metres, with the path, a track really, passing numbers water channels of Elmley Marshes. Until suddenly I came to a larger area of water ahead, which the track just disappeared into.

There was no bridge and to way across that I could see without getting wet feet, and this was brown muddy water, not something I wanted to try and walk through. I assume the farmer fords it in a vehicle. Frustrating, because this is a right of way marked on the map and given it’s a footpath, it should be passable on foot. So more wasted time, I had to re-trace my steps back to the old dock. This time I followed the bridlepath towards Kings Hill Farm. 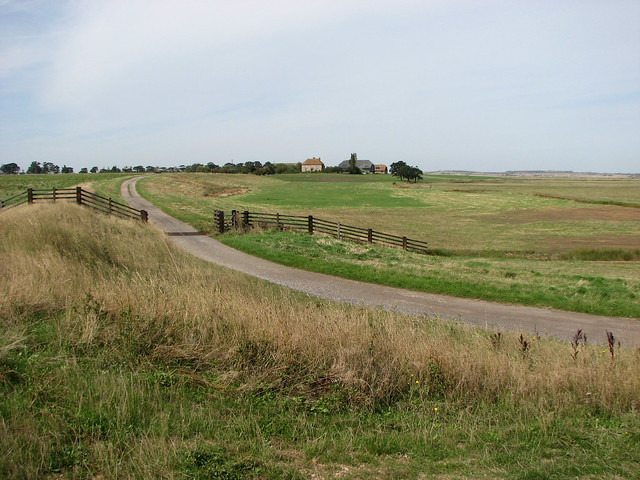 I followed the track to reach the farm and then turned right. Oddly just after the buildings, the official right of way is shown as turning off the track to the right heading to the shore and then turning inland, parallel with the shore to join the same track I was on, about 300 metres ahead. With all the wasted time I could not be bothered with that and continued on the track ahead, despite note marked as a right of way. This took me back to the shore at Sharfleet Creek. 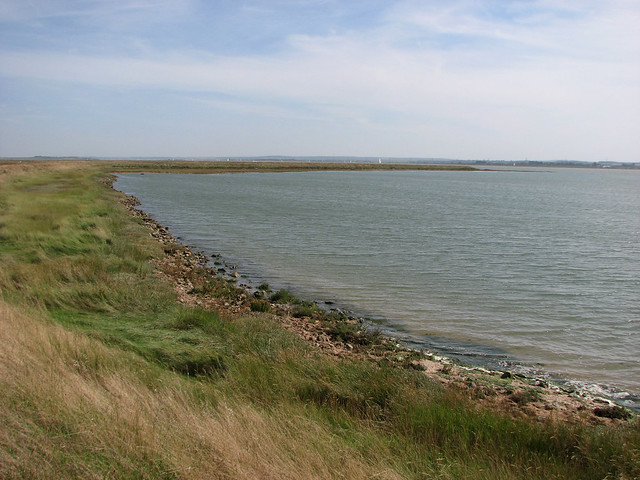 However this time the nature reserve had also provided a path along the sea wall I could follow instead so I could stick to the coast this time. This was very pleasant, soon passing over the Elmley Fleet on my left. 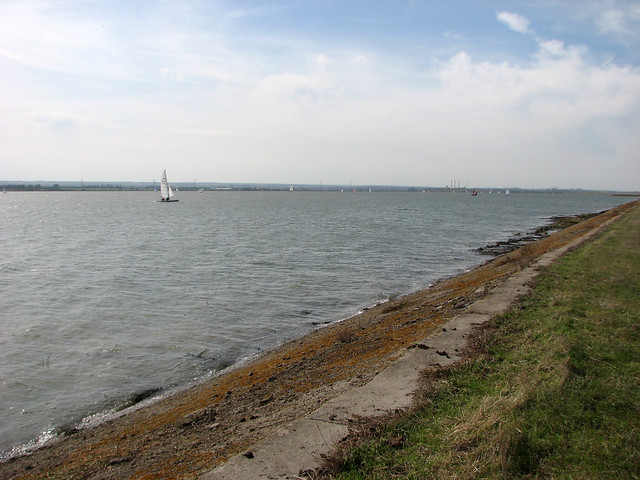 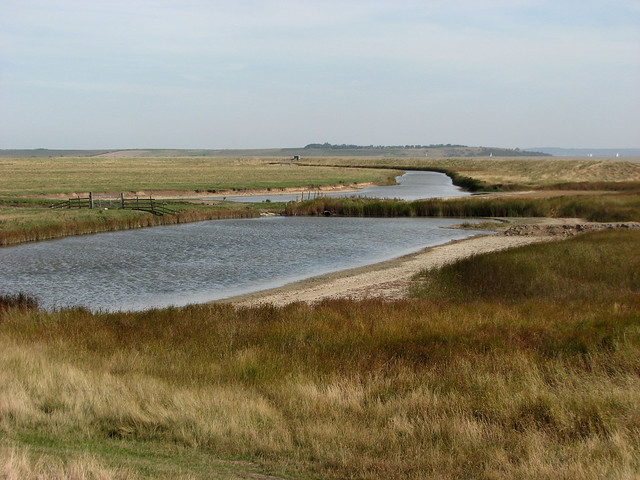 In fact the path on the sea wall continued, past marshes, all the way to Spitend Point. Having had frustrations with official rights of way that weren’t usable it was nice to find a coastal route that I didn’t think I would be able to walk that was usable! 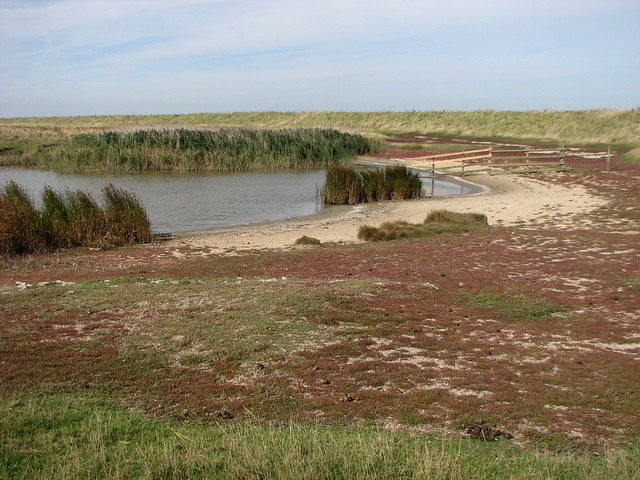 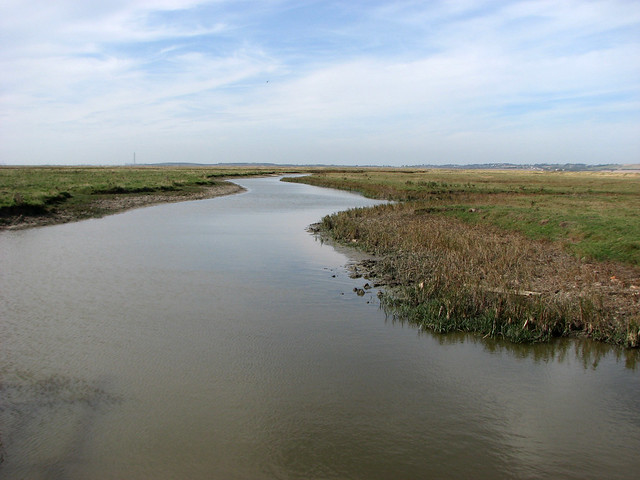 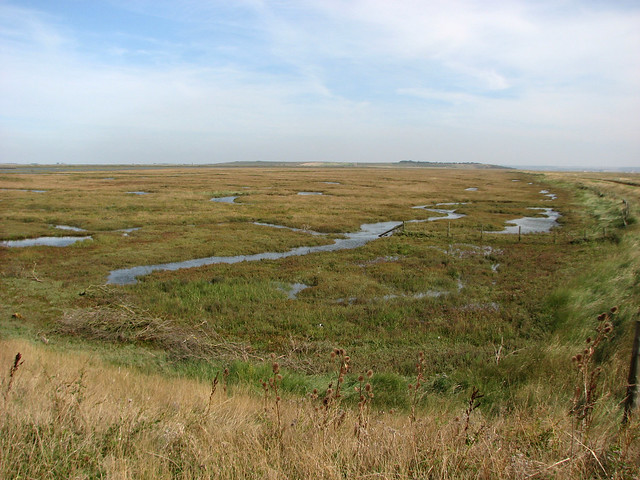 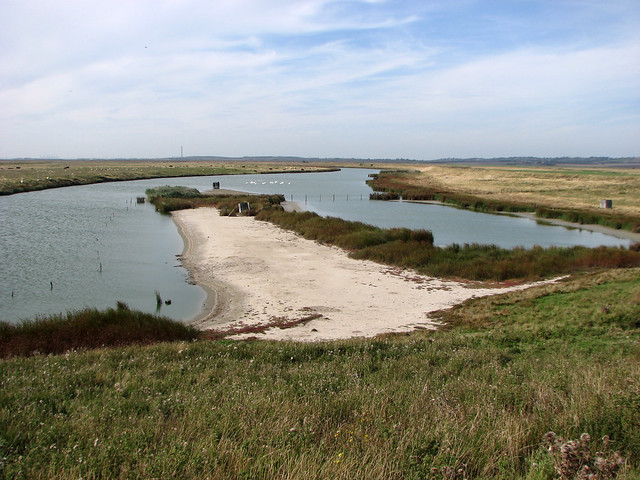 At Spitend Point I head to turn inland again to follow the southern edge of Windmill Creek. 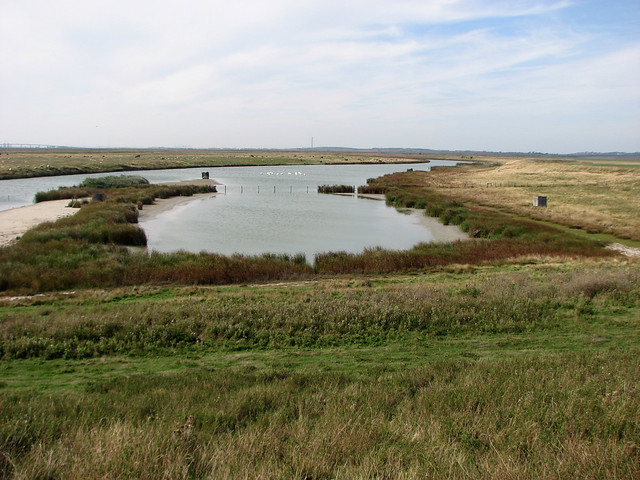 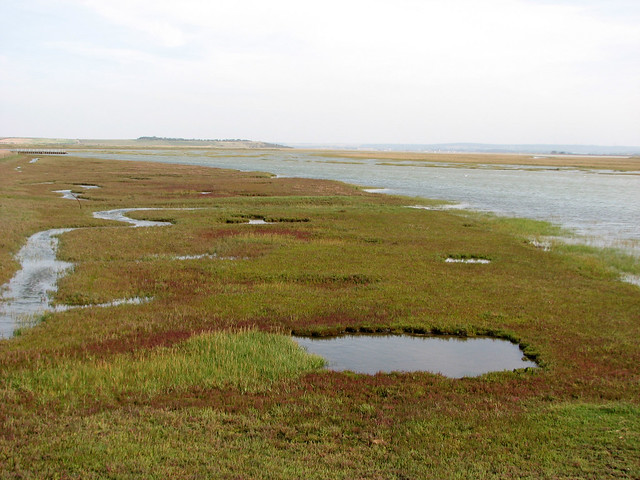 At the end I could turn right, back on the right of way along the top of the creek. This was the last point along the coast. Now the track headed briefly along the north edge of the creek to about half way along, then turned inland. This headed to Bells Creek where I disturbed lots of ducks, who all flew off as I approached. 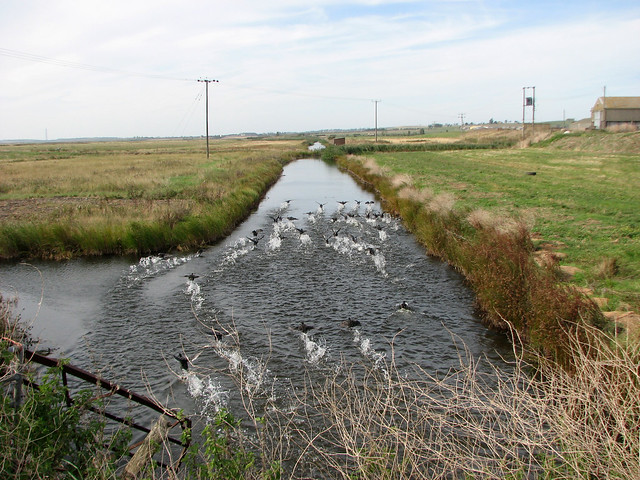 I was now near Little Bells and Great Bells and faced a choice. A right of way headed off east to New Rides and then fizzed out just before the B2231. Or I could continue on the track ahead, which was not marked as a footpath, but soon joined the road beside a couple of prisons. The latter route was shorter, so I opted for that.

It soon joined the public road, which I could follow beside the prisons on my right. and then reach the B2231 and continue ahead to Eastchurch, where I found the pretty and clearly very old church. 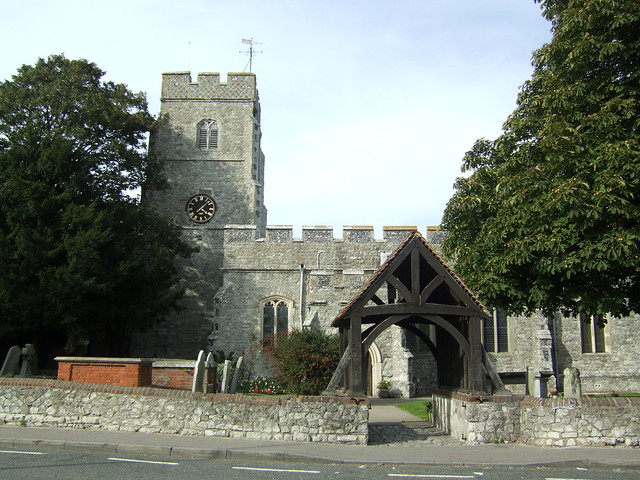 There is a bus from here, but I found that I had about 40 minutes to wait. I passed the time by taking a look around the church and taking a few photos along the footpath north from near the church to the road east of Garretts Farm, where I could enjoy views over the north coast of the island. 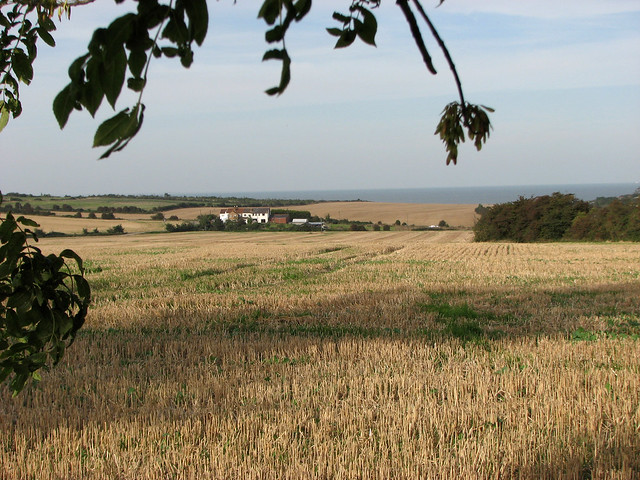 Heading back, I took the bus which took me to Sheerness-on-Sea from where I could take the train home, passing through the remote Swale station where I had started the day on the way.

This was my last walk on the Isle of Sheppey and anyone paying close attention to my route will realise I left the “coast” between Eastchurch and Pump Hill on Harty Marshes unwalked. This is because to join this walk up with my previous circular walk at Leysdown would be entirely along roads, none of which was even within a mile of the coast – that is as close as I could get. The though of walking 3 miles on roads with no pavement not even near the coast didn’t appeal. I’m not cheating, after all the “rules” I wrote at the start say I don’t have to walk around islands. And whilst I had walked round most of Sheppey I did not want to return just for an inland road walk. So next time I will be back on the mainland.

This walk was rather mixed and the south coast of the Isle of Sheppey turned out to be a frustrating place to walk. Having to head a mile inland to cross the railway, then walking on marsh facing industry to reach an unusable path I had to abandon. Thankfully, after than things improved with a nice walk along the sea wall through Elmley Marshes to Spitend Point. Sadly from here it was several miles walking inland on roads including past a couple of prisons, so not the best end to the walk either! But at least the weather had been fine and it was still a pleasant walk for the most part, despite not being the most varied or spectacular.

Here are details of the public transport needed for this walk. It is best to take the bus from Eastchurch to Sheerness-on-Sea and then the train from there back to Swale.

This entry was posted in Kent and tagged Coast, Eastchurch, Elmley, Isle of Sheppey, Kent, Sheppey, Swale. Bookmark the permalink.