Having made my own way around the south and east coasts of Hayling Island I was pleased to find that the west coast has a proper coast path – the Hayling Billy Coastal Path. This is so named because it follows the route of the old railway line from Havant to Hayling Island which was known as “The Puffing Billy” from the type of steam train used.

I had planned to catch the train to Havant but a check at the train times revealed there was a replacement bus service for the journey. So I drove there instead. I decided to follow the complete trail, from Havant station rather than just the bit from Langstone Bridge. So I parked in the station car park, as the trail starts from here. As I wasn’t using the train I am not sure if you are meant to do this but I don’t remember the signs saying it was for rail users only (and I did pay), but it would be worth checking.

The path started from the end of the car park. I thought it was a nice touch that some old wooden level crossing gates mark the start of the trail (perhaps they are the originals from when the railway crossed here)? This quickly settled into the familiar terrain of old railway lines, mainly a flat wide surfaced path, though in this case it was lined with trees so although I was going through the suburbs of Havant it was still quite green. 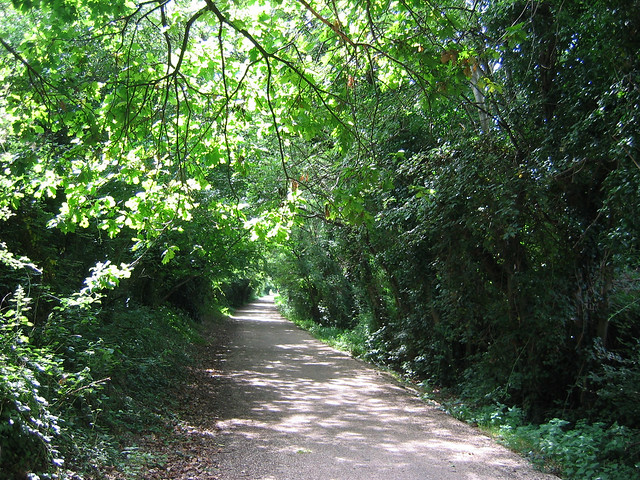 Soon the railway was running alongside a small river. I wondered how often the railway line used to get flooded by it. 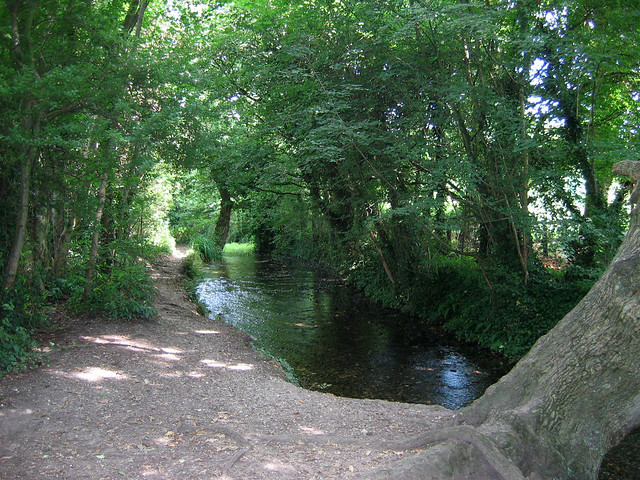 The noise of the A27 was now very obvious and soon I passed under it. As I approached Langstone I took a diversion off the old railway to visit the pretty High Street again. 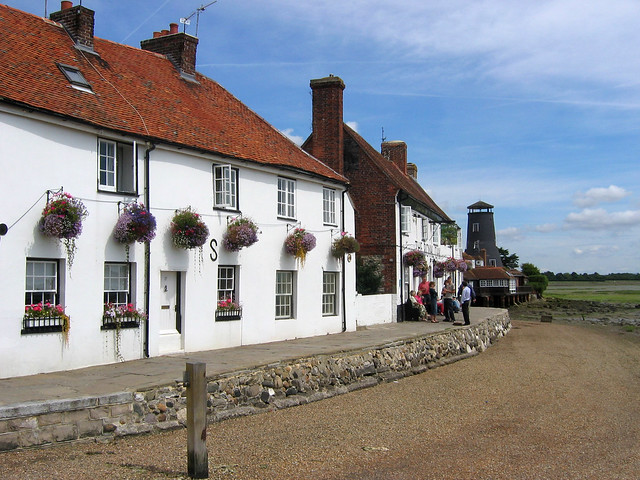 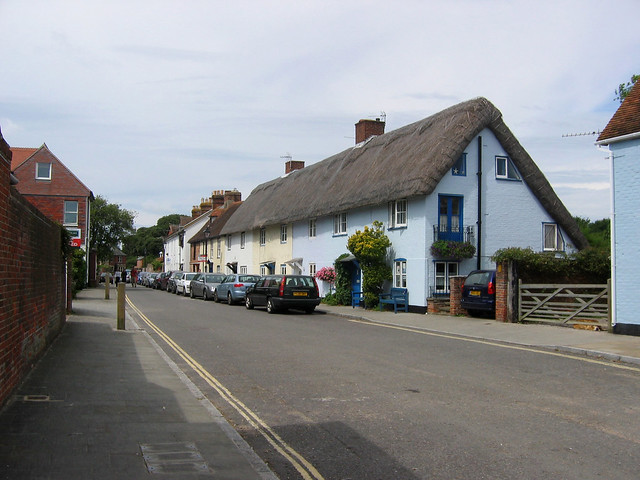 The tide was very low, revealing large areas of gravel and mud, with only a thin channel of water where the bridge to Hayling Island is. 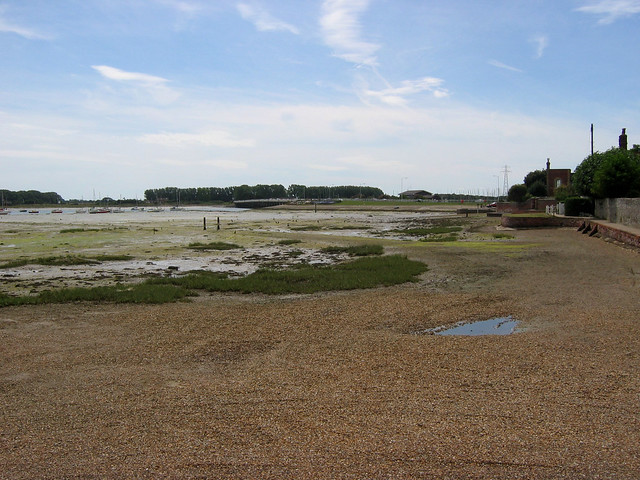 Now there is just one (very busy) road connecting Hayling Island to the rest of the country. However from the bridge you could clearly make out the old concrete supports for the old railway bridge, which had a swing section in the middle. 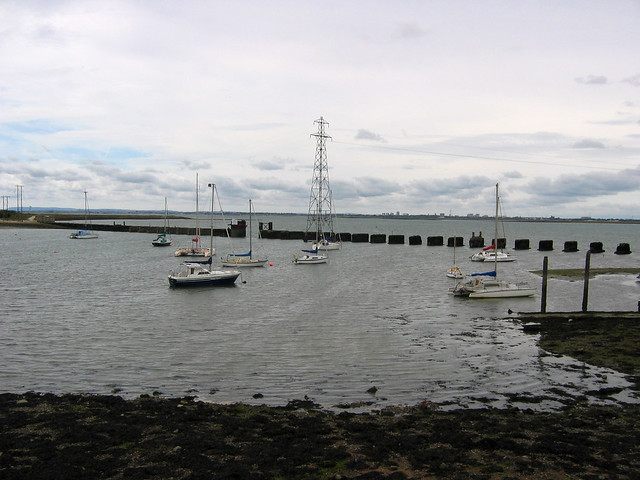 Once over a path soon turned right off the road and back onto the route of the old railway line beside Langstone harbour, where I found this welcoming sign. 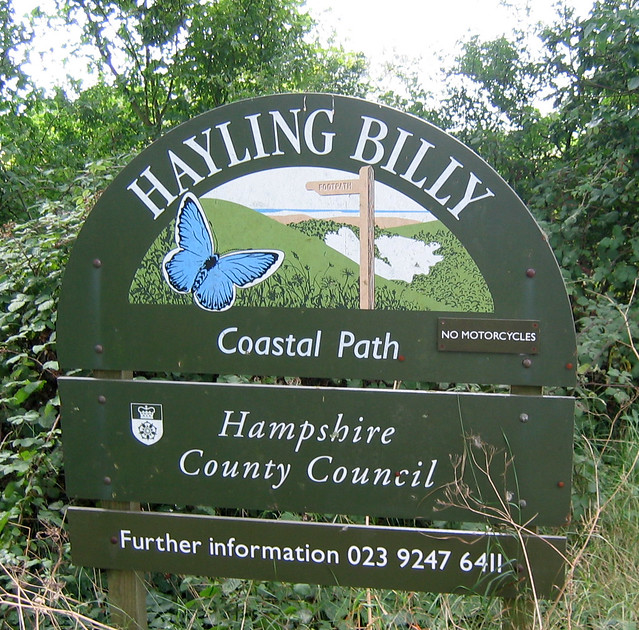 Having complained about footpaths in neighbouring Dorset, I must say Hampshire Council seem to do a far better job – this trail is now also part of a new long distance trail the Council have created called The Shipwrights Way which runs from Bentley Station (between Farnham and Alton) to the coast at Hayling Island. This new path included creating new routes over MOD land and the whole trail was opened earlier this year – it is good to see the Council working hard to open up new routes!

Once back on the route of the old railway line some remnants remained including this old semaphore signal which is now rather redundant given there is no longer a bridge or any track! 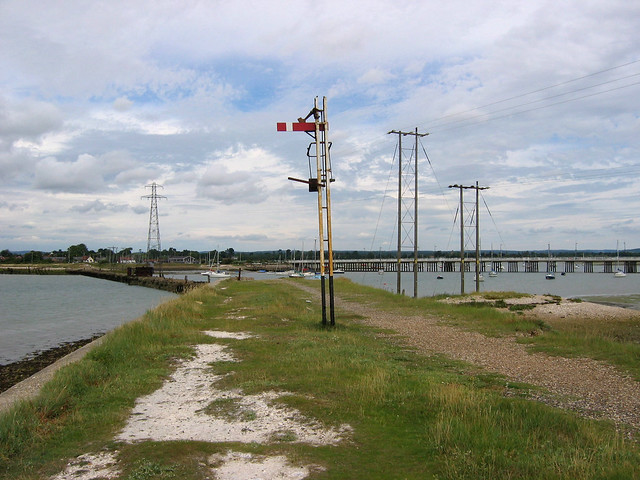 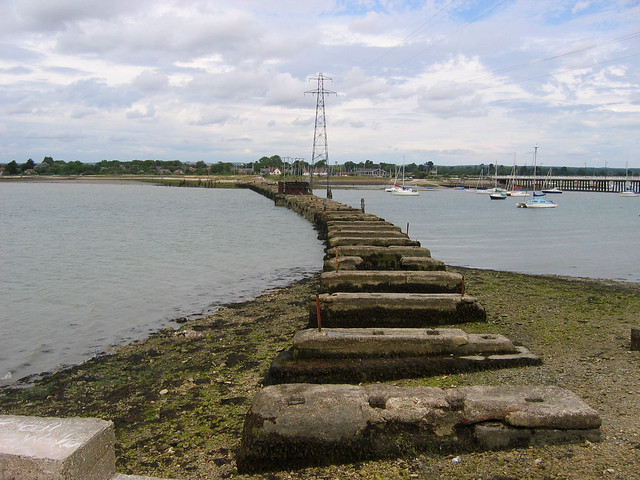 Almost straight away I had marsh land going off to my right. Looking at a map it looks very much like the original wall of the island was breached allowing the sea to flood in. But a check online shows it is in fact the site of the “South of England Company Oyster Beds” which were created in 1864. They are now part of the West Hayling nature reserve. 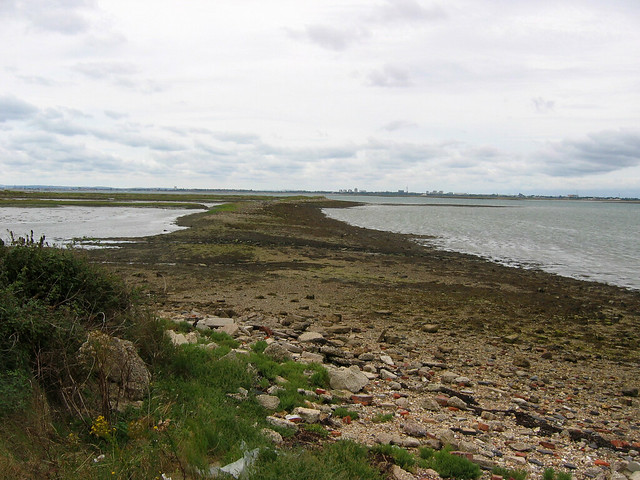 There was an old Southern Railway sign past part of this warning of an underground pipe. The marshes did not look too appealing at low tide as it was mostly mud and little in the way of bird life. 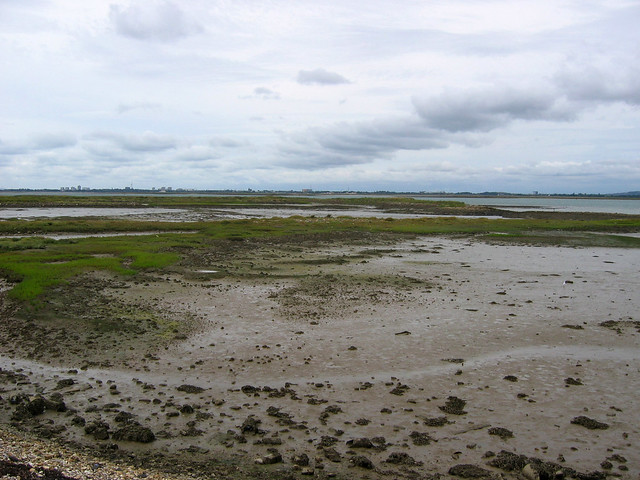 Heading further south along the old railway line, there was more water in some of the pools further along. 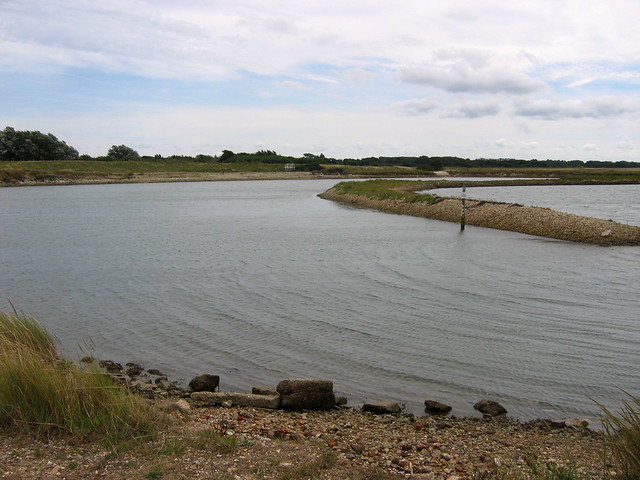 After passing the old Oyster beds the railway and path returned to the shoreline. Wooden posts indicated there had been some attempts to prevent erosion as the railway line was barely above the water line here. 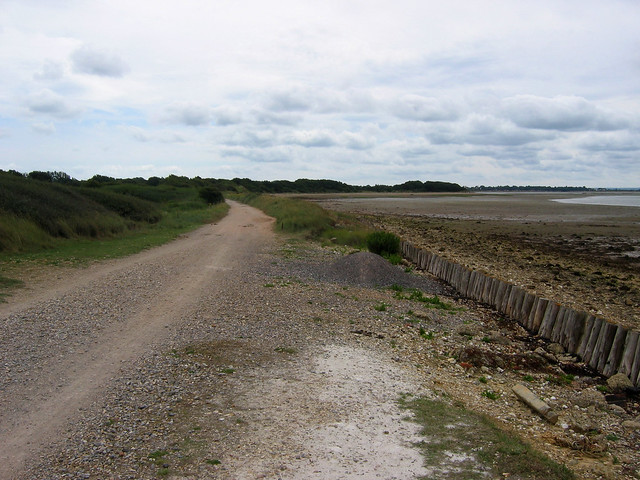 As I headed south the beach started to become a bit more sand and a bit less shingle and mud. Dunes and long grass started to line the path. The path was pleasantly rural, with wide (mostly shingle and mud) beaches to my right, backed by the old railway and some small trees. Portsmouth, just across the harbour, seemed a world away. 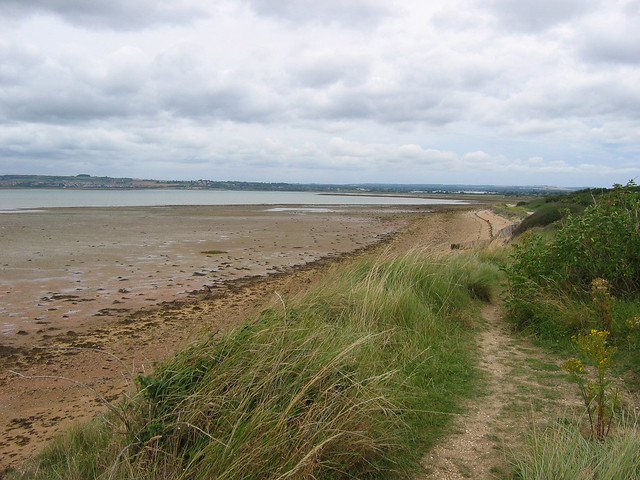 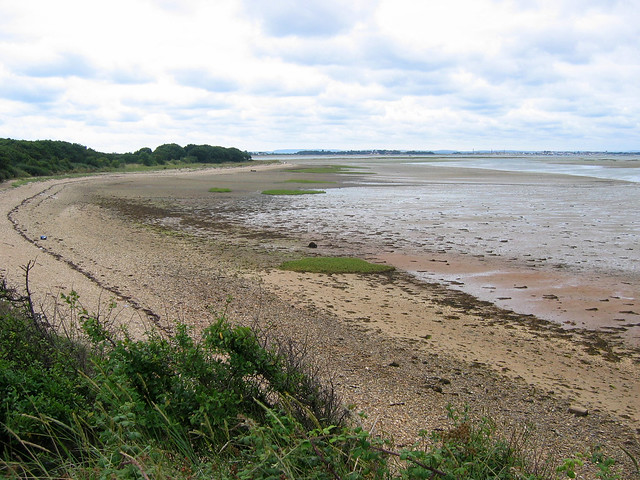 After a while the path went just behind the line of trees meaning I had views of the sea between the trees. I always like it when you can see the sea through trees like this. Just past here though the railway turned a little inland and so views of the coast became more distant, over large flat fields. 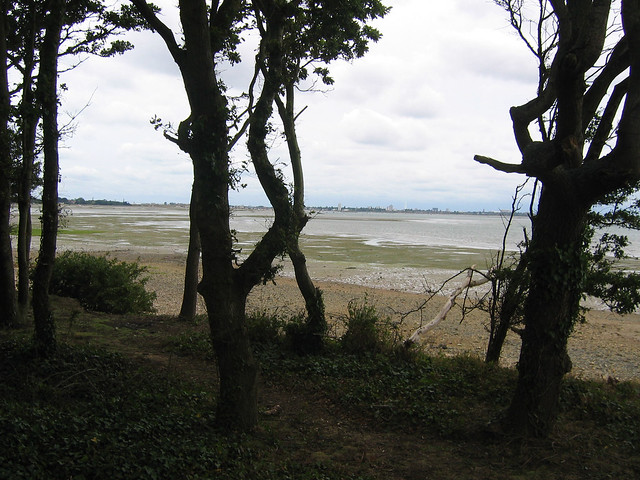 The old railway went over another marshy area and passed the edge of the village of Newtown. Ahead though I reached the road at West Town. This marks the end of the old railway route as what lays ahead has now been built on and is just residential roads. Rather than follow these to the shore I turned left to head out to the western tip of the island. I followed the roads west and south until I ended up at a pretty lake near Hayling Golf Club. I’m not sure if this is man made from old gravel extraction or natural. Either way it was quite pretty and some seats had been made up around what I suspected to be old World War II remains. 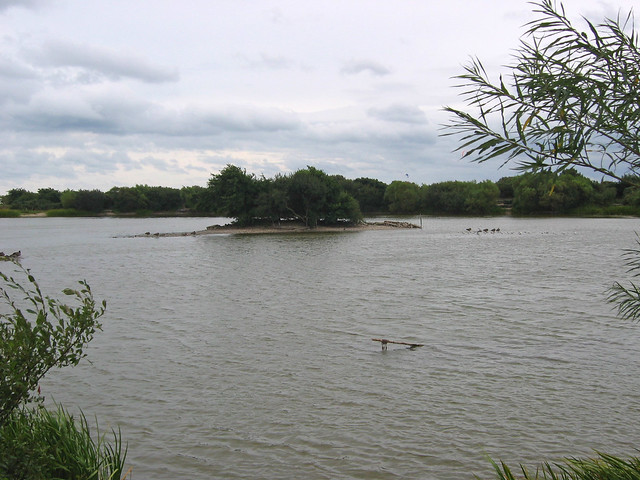 I walked through this to the car park and then back onto the road, now Ferry Road. I followed this road past the little harbour of The Kench, where there were what looked like house boats around the inlent. 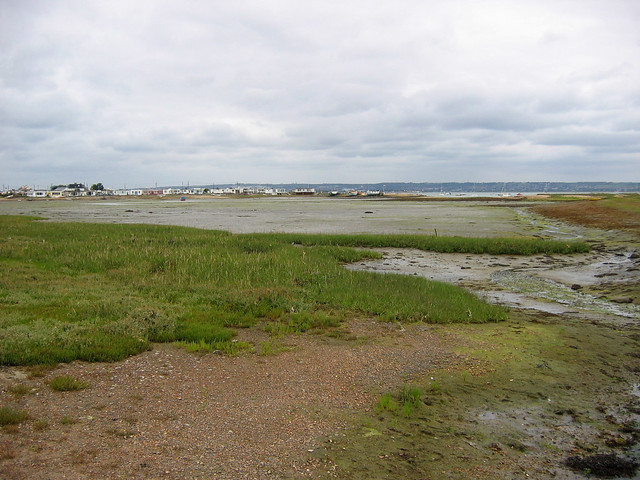 I continued along the quite busy road down to the end where the ferry over to Eastney in Portsmouth goes. This closed down a year or two ago but happily the service was restored earlier this year and it now runs again. 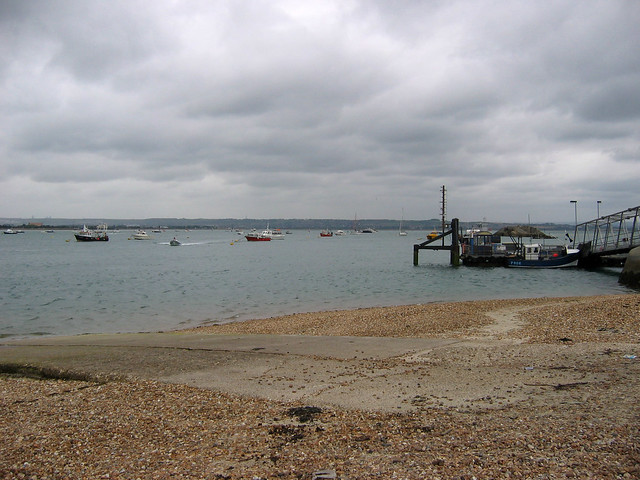 Since I got here on the previous walk , it means I have now finished my walk around the island. However from this point there is no bus back to Havant. I could have taken the ferry across, then a bus and finally a train but I decided instead to keep to the coast and walk around Gunner Point.

It soon felt quite remote, though with some likely military structures visible over at Eastney, part of Fort Cumberland. 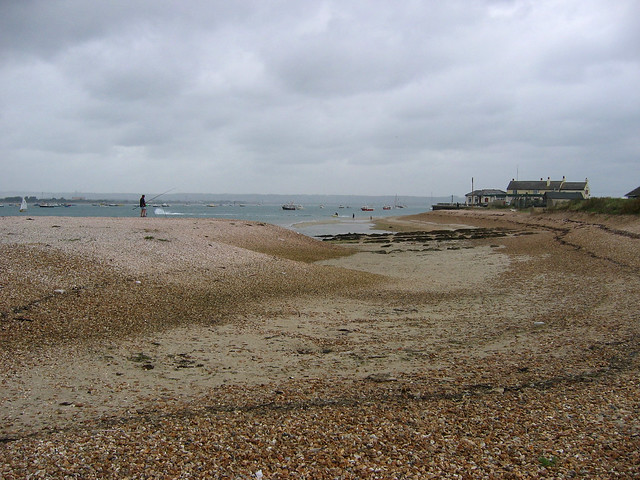 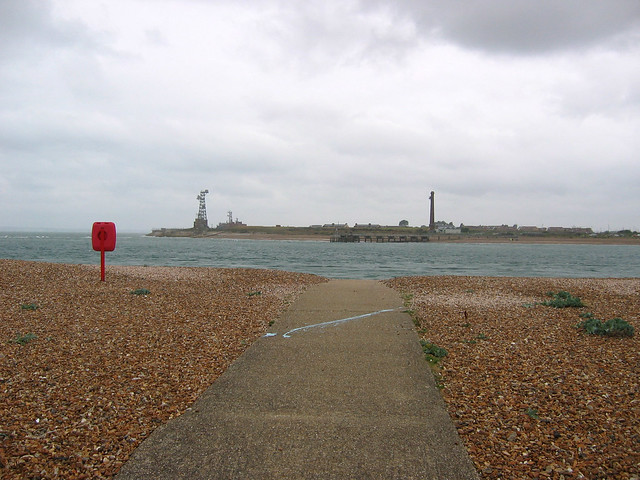 Gunner Point marks the south west tip of the island and so I was now turning the corner and heading east along the south coast of the island. After the shingle, it was nice to come across some sand. 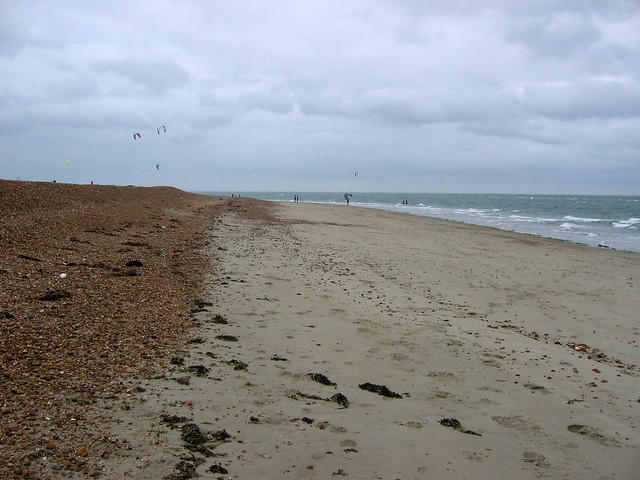 When I started this walk it was a nice sunny day. But it did not last. Cloud had been building through the day. As I approached the built up area of the island, drizzle started. 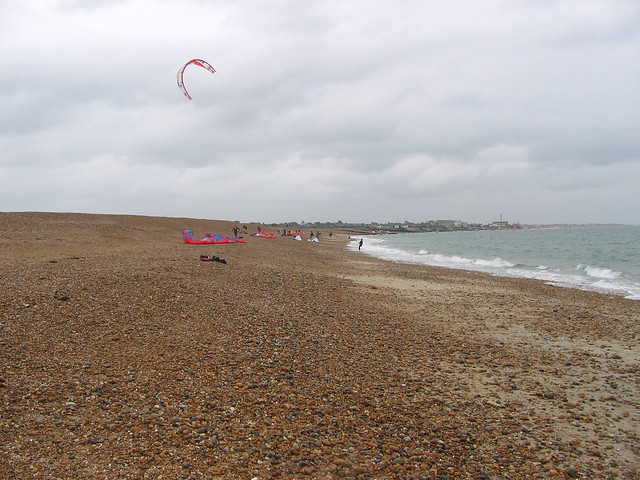 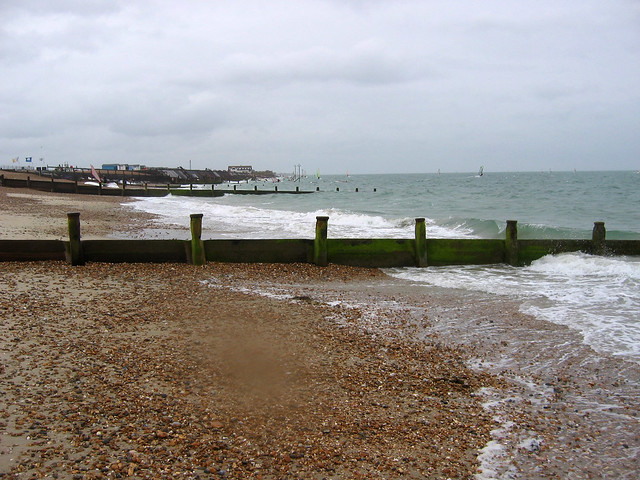 This soon developed into rain, which soon got heavy. I decided to call it a day and return to Havant (I walked this part of the coast later, see this previous post). I headed back from the coast and found a bus stop and did not have to wait long for a bus, which took me back to Havant bus station where I made my way back to the railway station. It would have been nice to be able to return from Hayling Island by train – but of course I’d been walking on the route it used to run along!

This was a short and fairly easy walk but one with more interest than I had expected (old railway paths can be quite boring to walk). As I walked it was interesting to reflect on the contrast between these two similar sized neighbouring islands, as I walked through the mostly rural western side of Hayling Island looking over to the far more urban Portsea island. I am glad I decided to include Hayling Island in my walk.

Here are details of the public transport needed for this walk :-