Unusually this walk starts and finishes in the same place, namely Poole Town Centre. This was because when I walked the Poole Harbour Trail I crossed the bridge into Poole from Hamworthy but later realised I had missed a bit out. This is because the Poole Harbour Trail goes around the back of Holes Bay, the innermost part of Poole Harbour, although the mouth of the bay is crossed by a couple of bridges, which I had crossed on a previous walk.

A look at the map suggested this was unlikely to be the best part of the trail because it was largely through an urban area and alongside dual carriageways for parts. But look can be deceiving, this was actually a good route and a very enjoyable walk.

I drove to Poole and parked at the quay multi storey car park which cost £5.40 for 6 hours. From here I headed down to the water front. 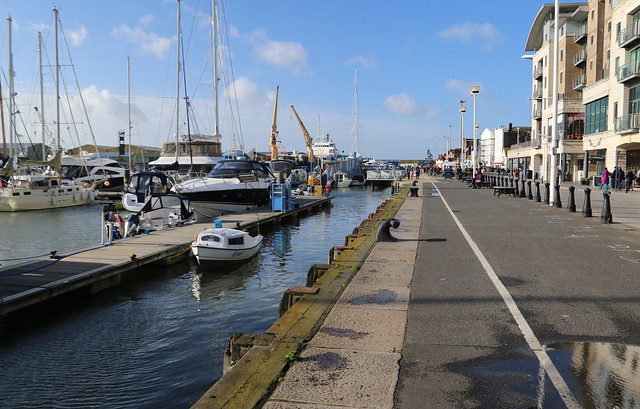 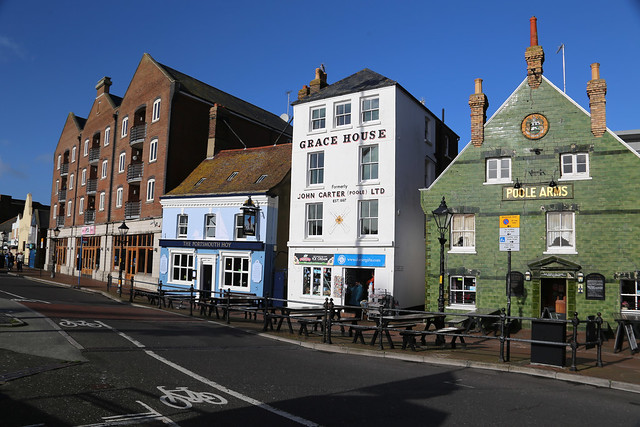 Although it had rained heavily overnight, the rain had stopped and the weather soon brightened up. I turned left along the quay. A large boat, with the location “St Johns” was having one a luxury yacht loaded on to it via a crane. The luxury yacht maker Sunseeker is based on Poole, so this sort of thing happens quite often I imagine, but it was causing some entertainment to people watching it, perhaps wondering if they were going to drop it back in the harbour!

At the end of the quay I turned left to cross the swing bridge over the entrance to Holes Bay, the most northerly part of the harbour. This is now one of two bridges that cross the harbour mouth, the other being the more recent Twin Sales Bridge. 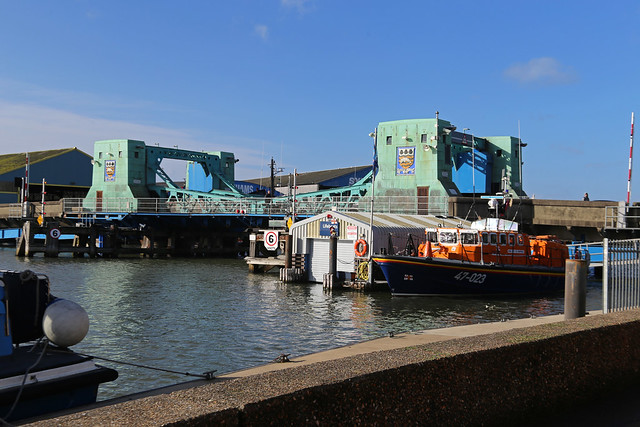 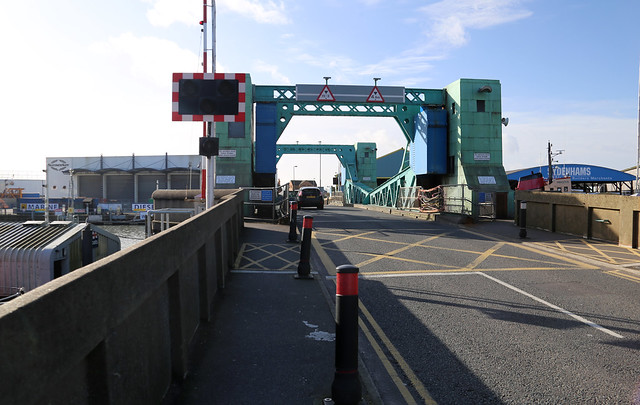 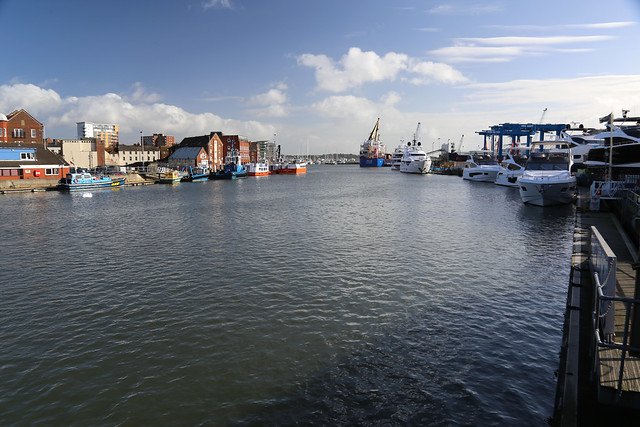 I continued along the rather dreary road – the port area of towns are usually not the best, and Poole is no exception. Soon I can turn right and follow the road to a school where the path goes off to the right on a tarmac track next to the school and playing field. At least I think it does, for there are no signs, but the dog pooh bins along the track suggest this is a public path.

This soon ends and I’m nearing an enormous and buzzing substation off to the left. I continue ahead and come out into a circular area with wooden jumps, a BMX track I assume. I thought the path was ahead, but I realise I’m going around in a circle and the correct track is a muddy one around the back of the school tennis courts. This is a muddy flooded mess and I have a terrible job trying to get around the boggy and flooded areas and keep dry feet. To my great surprise I manage it, and the views to my right a lovely. 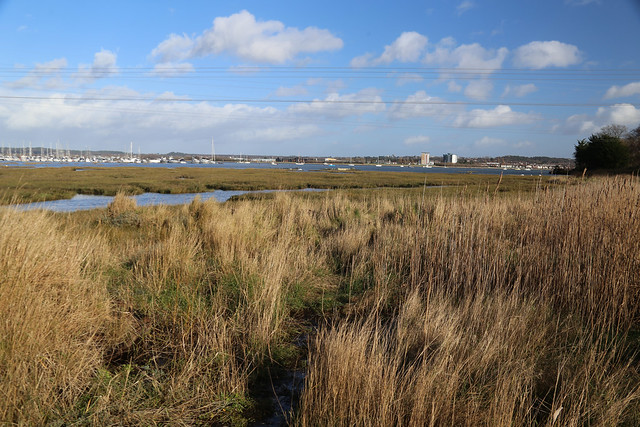 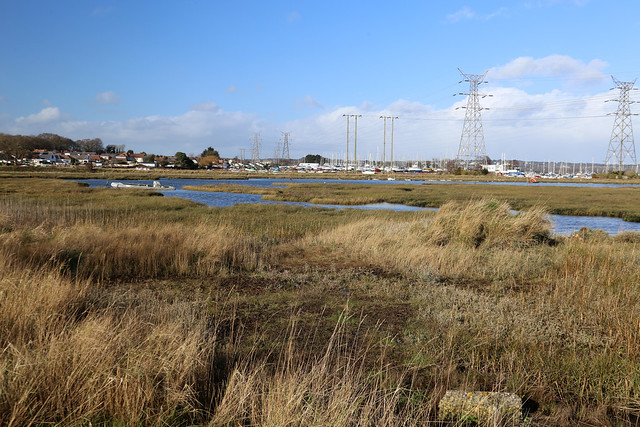 I have timed this walk well, since the tide is in and the creeks and salt marshes are full of water rather than mud. I pass the back of a few houses on the left and then come to a better path going left to right. Oddly to my right I see that it is signed as a Public Bridleway, but there is no such path marked on the map. I check and see it is a dead-end along some sort of jetty but walk out onto it anyway as other than the power lines, it gives a wonderful view. The end is clearly a favoured fishing area but there is also a lot of rubbish and grafitti, a shame. 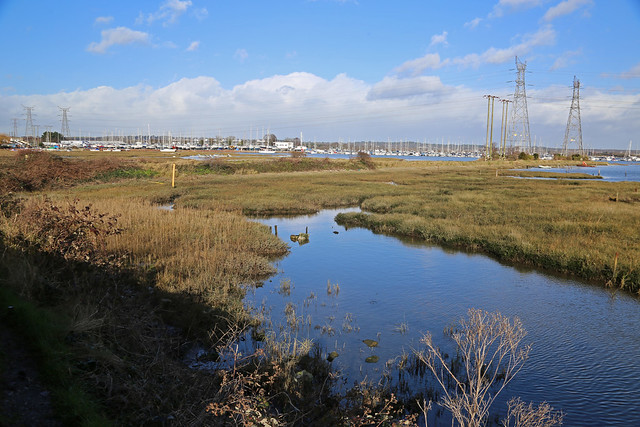 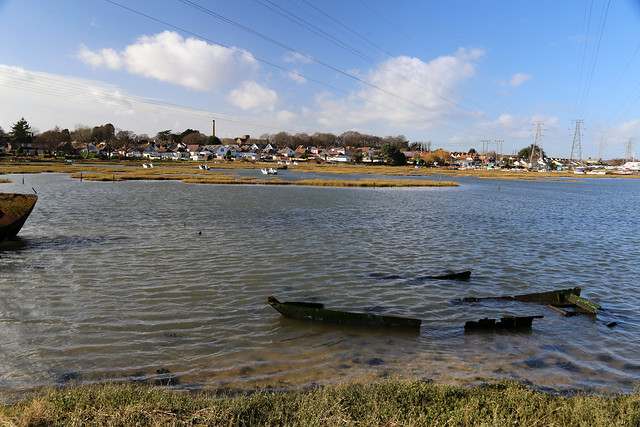 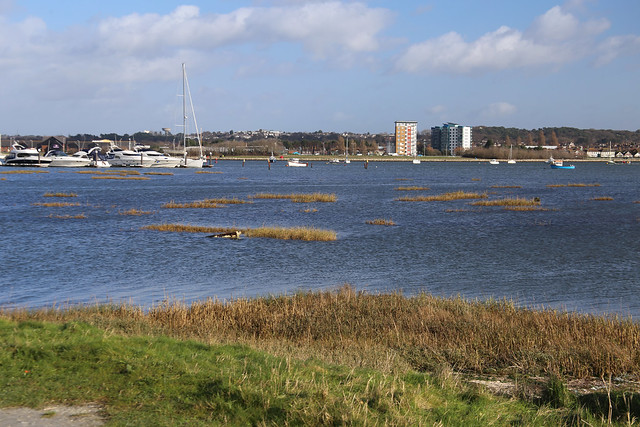 I head back and then turn right on the path around the backs of the gardens. It must be nice to have a path down to the harbour at the back of the garden, but I’d not want to live this close to the harbour, as there is little to stop flooding. Many of the houses have their own little jetties and boats and it is very pretty. 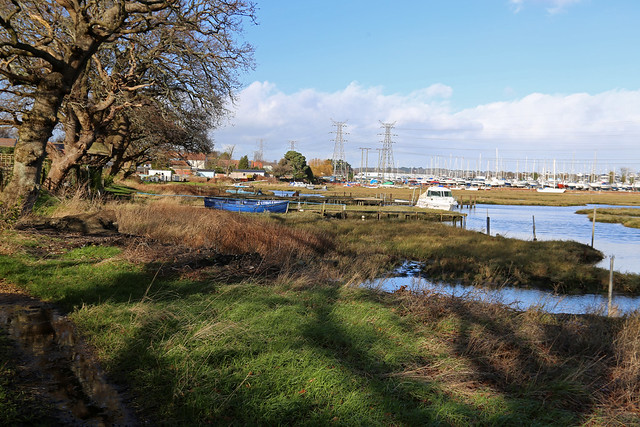 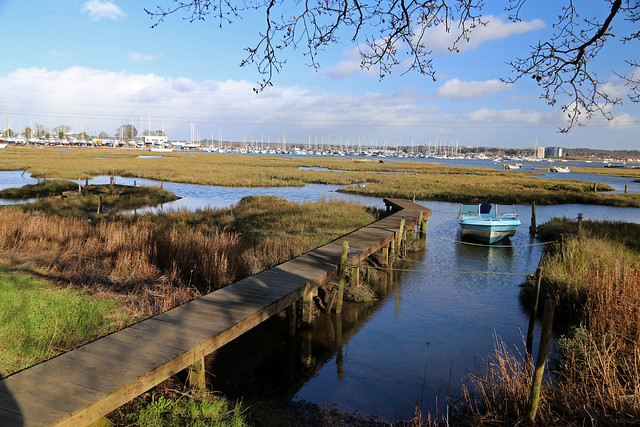 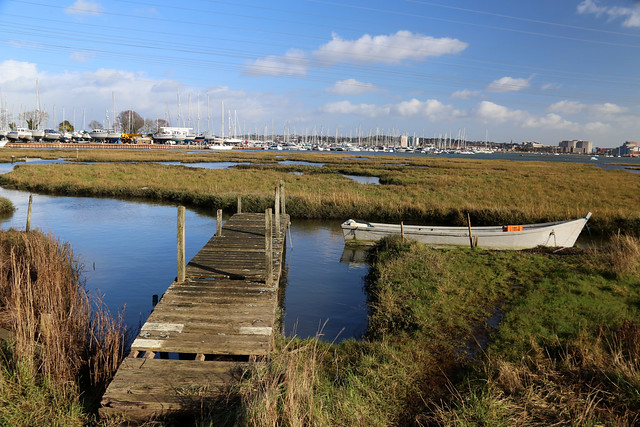 The path is variable though, some good bits, some really boggy bits. At the end of the houses, there is another pylon and the path turns left through a gate to head back to the road. This is now a quiet residential road though, and not the main road I had been walking along earlier. I can turn right at the first road ahead which leads into the mariner and fork left just before the entrance. The marina is surprisngly busy and I have to wait for a few vans to pass before I can cross the road. The path is now squashed in between the brick wall of one of the marina buildings and the gardens of houses on the left. Soon though the path emerges from the enclosed track onto an open, if boggy, grassy area. I can soon rejoin the edge of the harbour Ahead there is a junction of paths and I can soon join a tarmac track now going along the backs of some houses, which have a rather nice outlook onto the harbour. 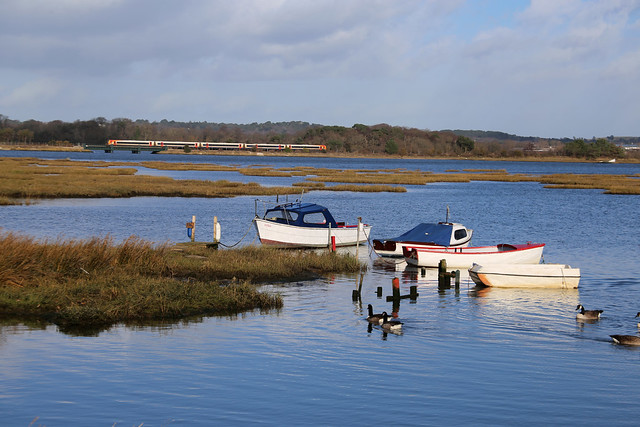 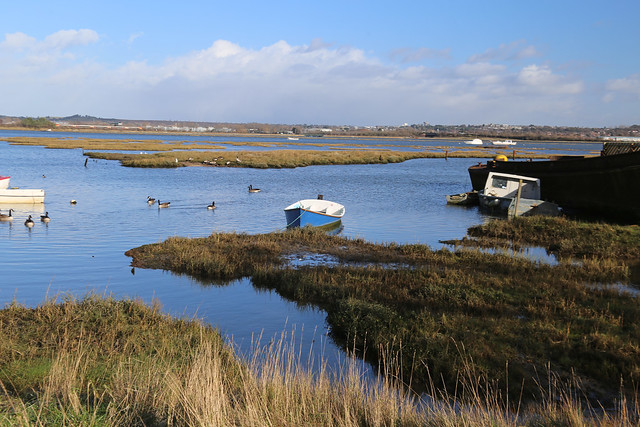 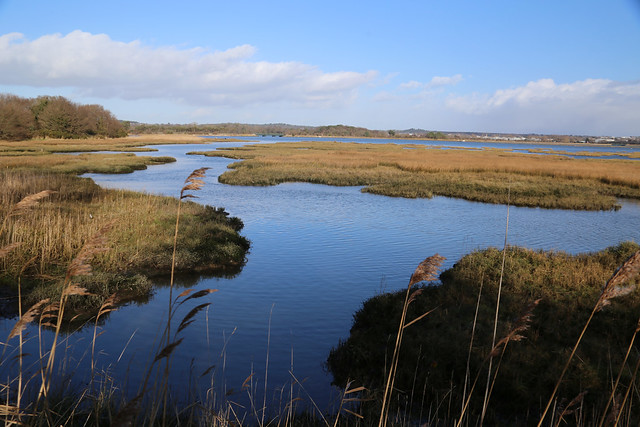 As I head north I’m nearing the railway line, which runs on a causeway over Holes Bay Road. (In fact you might notice a train on the first photo above). It almost feels like the railway designers had decided they had had enough of going around the harbour and simply forged a route right over it here, although a bridged section of the track does allow water into the area behind the railway. I can continue along the tarmac path beside the houses for a while until I reach the railway and have to turn left along the road, although it is a quiet residential road. At the T-junction I turn right and after passing just a few houses there is a path under the railway line where a sign welcomes me to Upton Country Park.

Here I’m pleased to see there is a shore walk signed off to my right. Sadly the path is flooded, right over the path, so I have to make my way over the first bit by climbing onto the bottom row of the wooden fence and climbing along the edge of the fence until the ground is dry and I can return to the proper path. The railway is immediately alongside on my right as is a small stream, which comes to a weir at the end and flows out into the harbour. Here I can turn right on a pleasant path alongside the harbour. 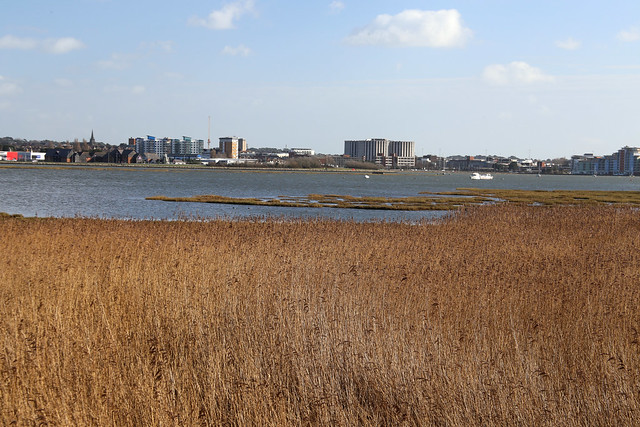 There are fine views of the harbour here through the trees and a couple of seats. I sit on one for my lunch, enjoying the view of the marshes and the numerous birdlife. I had worried if this path might too be flooded, but a good boardwalk has been provided over areas of the marsh. 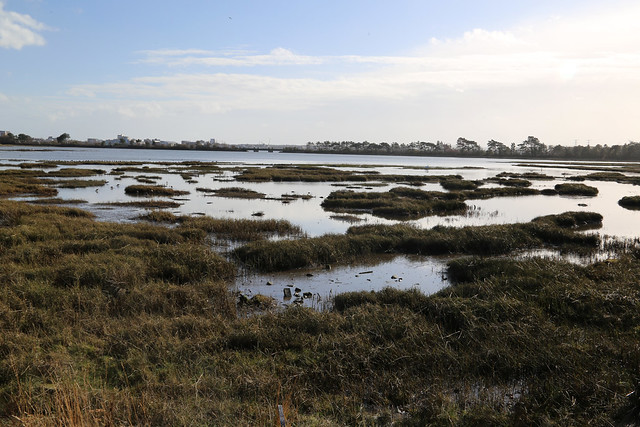 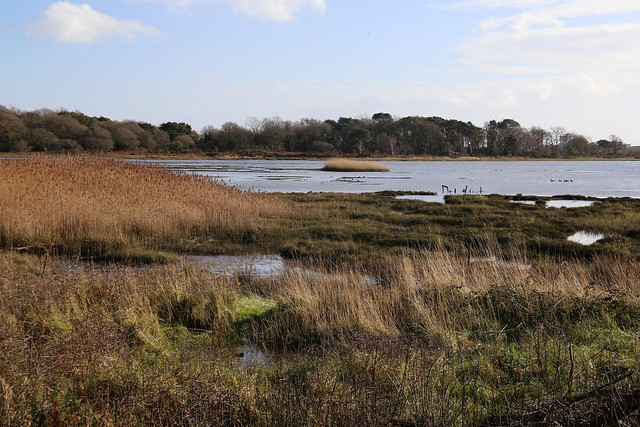 It is really lovely and there are also some sort of stand up bird hides off to the right to allow you to see the birds. I continued on the lovely shore path and soon came to an open grassy area with as view of the main house of the country park on the left. 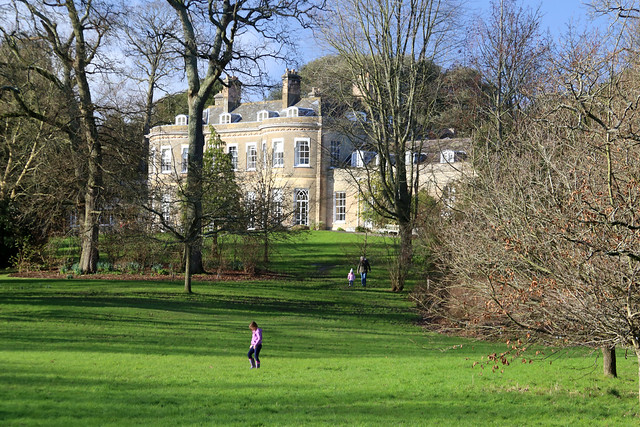 The large manor house, along with the rest of the park is now in the care of Poole Council and a much loved attraction. Soon the path exits via a gate from Upton Country park, but continues alongside the harbour. 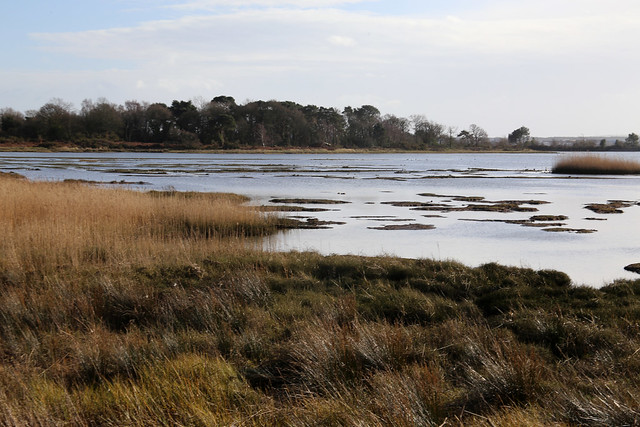 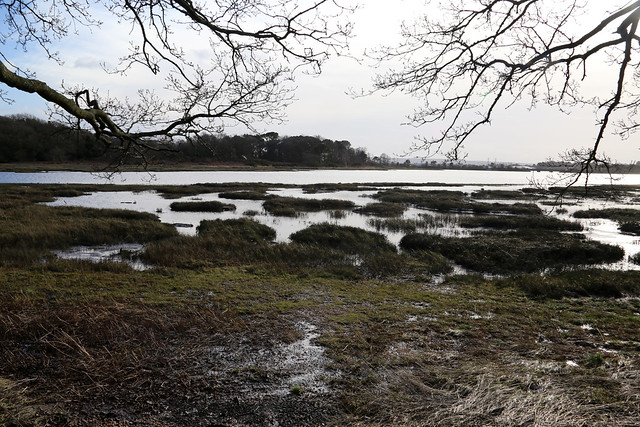 After a while, it is alongside the main dual carriageway into Poole, Holes Bay Road (the A350). This means there is a lot of traffic noise, but the path is mostly a bit below the dual carrigeway and seperated by grass, making the road less intrusive than it otherwise would be (and than I had expected). There are a couple of places where you have to head up to the road and the pavement alongside to cross some drainage channels, but once over you can soon head back to the lower path beside the harbour. Although a cycle route it is not well used, but I am enjoying the peace. As I continue the rather ugly flats and RNLI buildings ahead mark the end of the path along the harbour.

Soon I have to head up again to cross the railway line and the causeway that slices this part of the harbour in two, although a part of it is a bridge allowing the water to flow through. 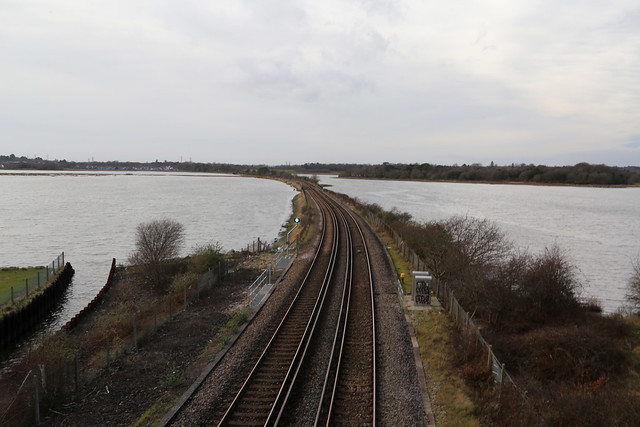 I continue on the tarmac path passing the fairly ugly buildings on the edge of Poole to my left, mostly modern such as various garages and a Premier Inn. Out in the harbour the flats and RNLI building are rather a blot on the landscape. 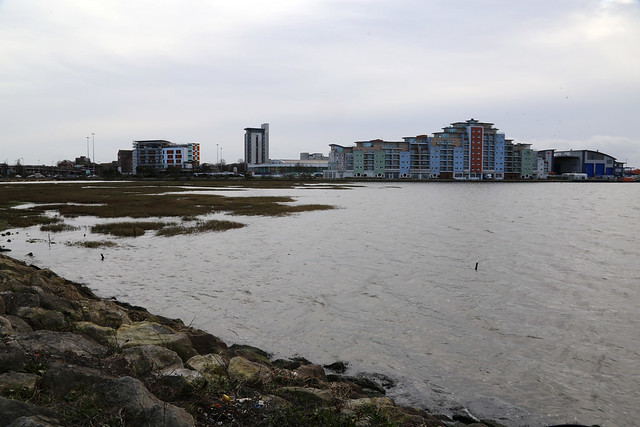 On reaching alongside the railway station on the left I crossed the road via a complex series of pedestrian crossing and make my way into the fairly grim underpass that brings me out to the back of the Dolphin Centre, the main shopping centre in Poole Town centre. Here I turn right and cross the railway line via the level crossing. I can’t think of many towns where the main shopping street is cut in two by the railway line. I hear Network Rail want to close this – I think they will have a job, it is so busy and sending everyone up onto a bridge no matter if a train is coming will not be at all popular!

The street is part pedestrianised for a while but the centre has been taken up by a market so I make slow progress down the croweded streets with people milling about or stopped in groups. I am glad to leave this area and whilst the road ahead is open to traffic again there is not much of it and neither are there so many people, meaning I can speed up from the slow shuffle I had been forced to earlier. This soon brings me back to the historic quay area of Poole, where I finish the walk.

Although only a fairly short walk this turned out to be much better than hoped. A look at the map suggested this would not be a promising walk, surrounded by housing in a not particularly glamorous area and then by a busy dual carrigeway. But it proves the route on a map can be deceiving, as this turns out to be a lovely (and easy) walk alongside the harbour. No doubt better when the tide is in, as it was for me, there is a lot to see including a good deal of bird-life. Other than some muddy sections near the start, the paths are also mostly very good meaning this is an easy walk to enjoy.

Here are the photos from this walk  : Main Link | Slideshow