For this walk I am continuing along the Poole Harbour Trail around Poole Harbour. It was another glorious winter day, cold but sunny with clear skies and good visibility, making it a good day for a walk.

I drove down to Sandford my destination for the day thankfully having a fairly quick journey. The busy A351 cuts through Sandford and I couldn’t see any signs for a car park, so I turned right along a residential road and parked in the road that parallels the A351, by the bus stop, which handily has a cut through from the A351 to this road. I wasn’t sure what time the bus went, and being a cold day I was keen to avoid a long wait so my plan was to see when the bus was due and if it was a while walk from Sandford to Wareham. So I was pleased to find a bus due in about 10 minutes. It arrived more or less on time and soon took me to the pleasant town of Wareham, little more than a mile away in fact, a hint that this walk is not going to follow a very direct route!

I headed down the main road through the town to the bridge over the River Frome, where I finished my last walk on this route. 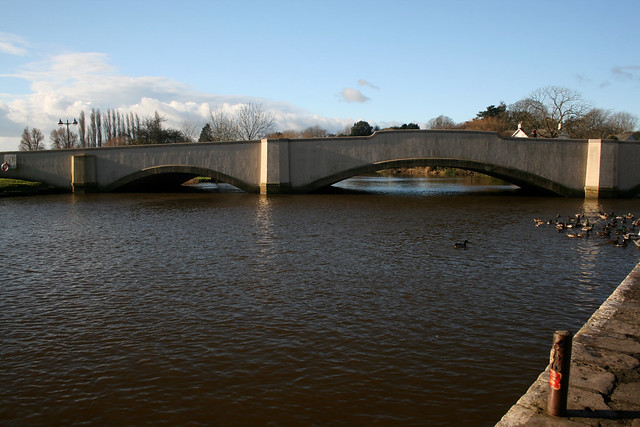 This is beside the towns quay, which is generally the view of the town you see on postcards, calendars etc, and it is not hard to see why. 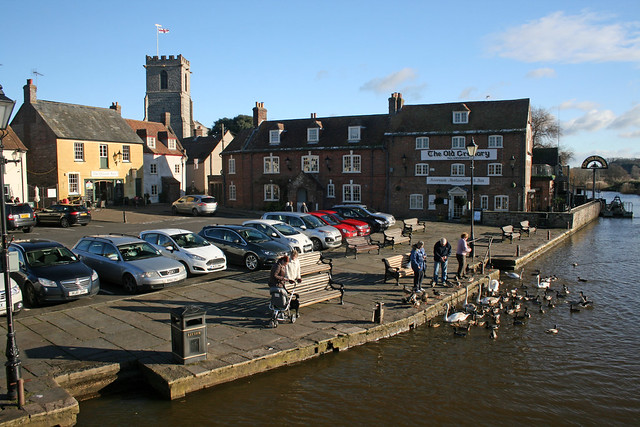 Although the walk in fact started from the north side of the river I first crossed the river via the bridge to get a better view. 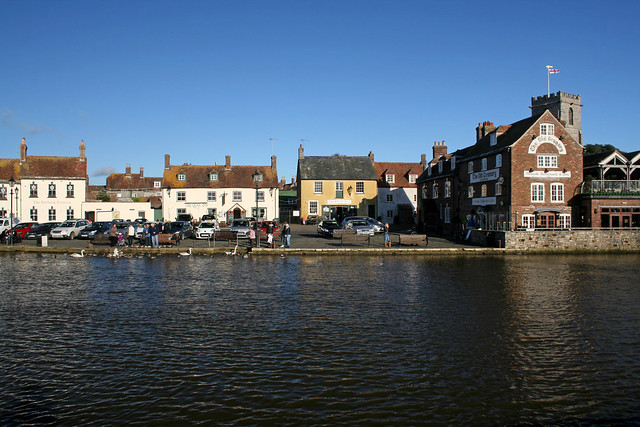 The view down the river, looking towards the coast, is also very nice. 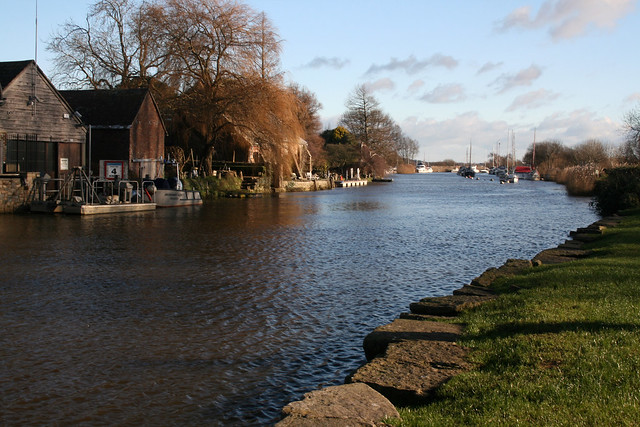 It was time to start the walk so I crossed back over the bridge. This is really a walk of two halves. The first part of the walk the Poole Harbour Trail follows the route of another of the routes promoted by Dorset County Council, the Wareham Two Rivers Walk and there is a handy PDF file you can download of this route.  In addition whilst I’m on the subject there is also two PDF files available covering this leg of the Poole Harbour Trail, so there really is no excuse for getting lost. The route is also marked on the most recent addition of the Ordnance Survey Map.

The walk begins from the quay and I head up to the far corner from the bridge where a narrow road brings me to a smaller and far quieter little square in front of the church. 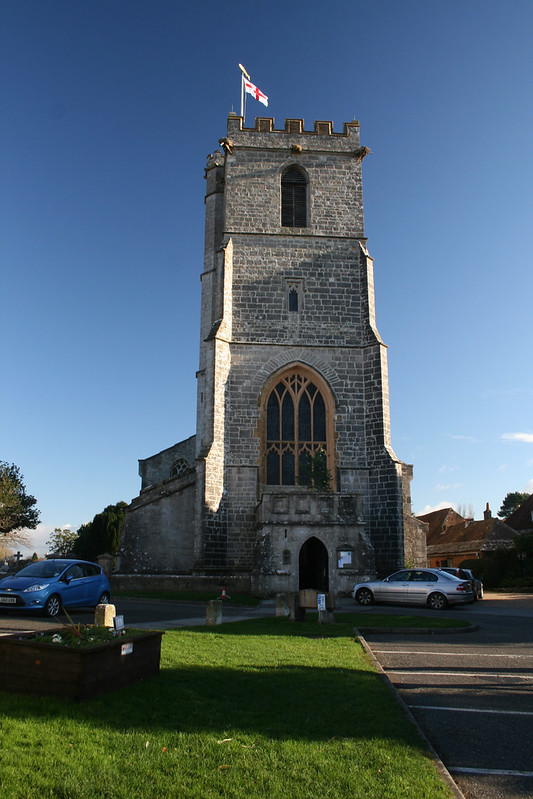 I turned left here along Church Street and then right into Church Lane. This is an unusual road as it heads right through the middle of the huge graveyard that is north and east of the church. It’s main purpose these days seem to be to provide free parking for the town! At the end of the road I turned right on a path which headed down to the river along the western edge of a field.

Wareham is almost an island, separated by the rivers Frome and Piddle and the two bridges either side of the town, North Bridge and South Bridge. This first river is the river Frome and it is very scenic, with boats lining the reed covered banks of the river. In the summer months it is possible to take a boat trip from here out into Poole Harbour and on to Poole or Sandbanks although it is only possible with certain tides.

Getting a good view of the river proved difficult though, with the reeds between me and the river. 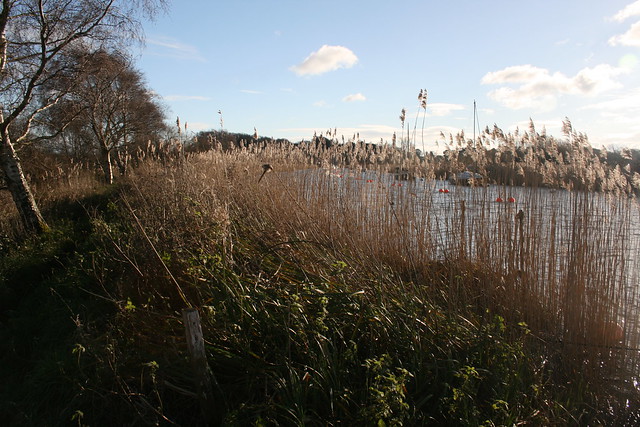 There was another problem too. I suppose to be expected, it being the depths of winter, but the path was in a dreadful condition. A muddy boggy mess with quite literally ankle deep mud all around. It was a real challenge to get past this and I hoped once I had done so this would be the last of the wet areas, but it was not to be.

The reedy boggy path continued south to a bend in the river opposite the village of Ridge, where I walked last time. A brief clearing in the reeds here allowed me to get an un-interrupted view along the river. 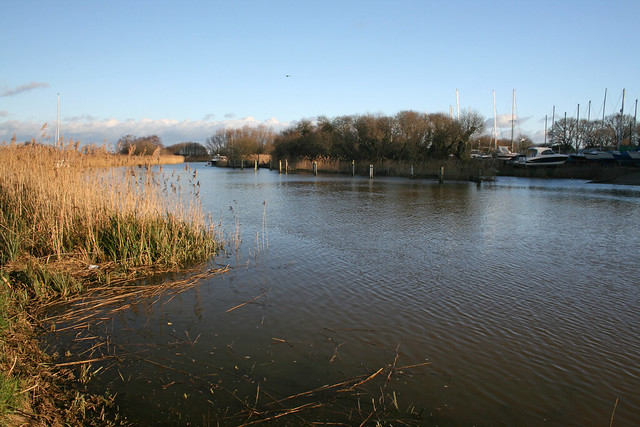 There was a fine view to my left too, over the flood planes of the rivers and back towards the town. 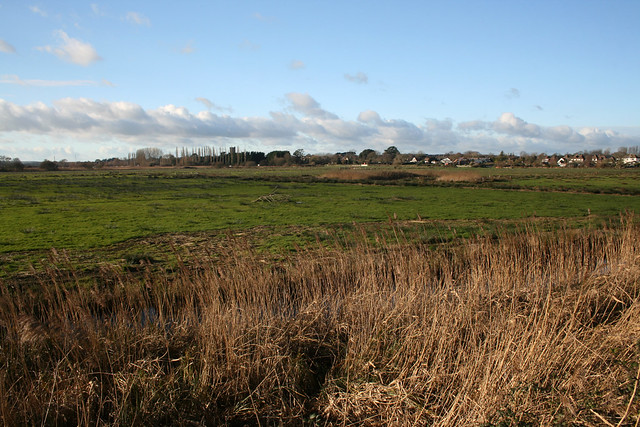 Reaching another bend in the river I got another good view along the river, which seemed very calm and still, almost a pond. 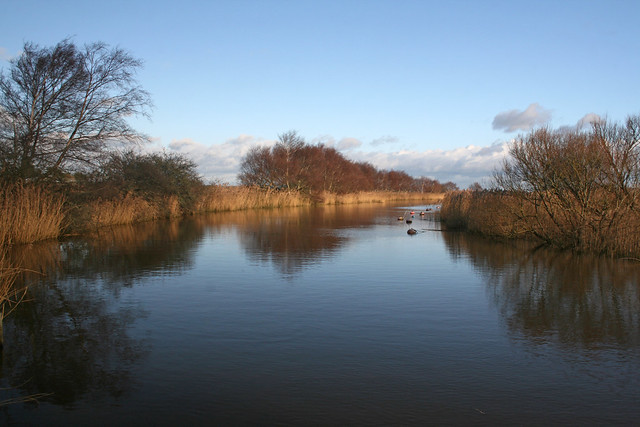 It was absolutely beautiful along the river here. I continued along the river bank though again the path is in a dreadful condition, it has numerous boggy areas, sections are slipping into the river leading to a wet muddy path sloping towards the river – not ideal!

I continued, with difficulty to make my way along the path, but the views made up for the difficult ground conditions. 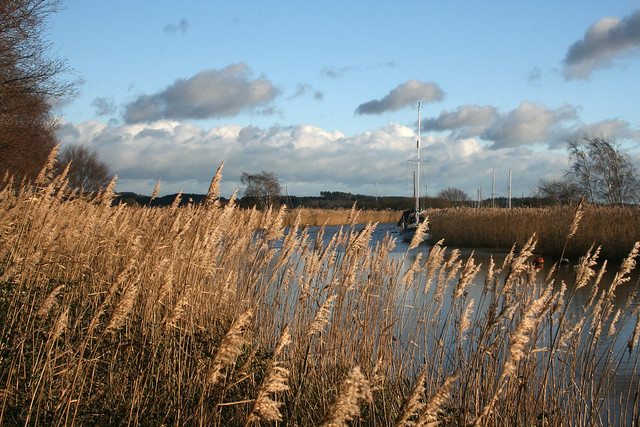 It was a peaceful walk with few boats on the river at this time of year (and also little in the way of birdlife). It is also clearly a popular place to moor up boats as most of the river banks have been lined with boats on one or both banks. 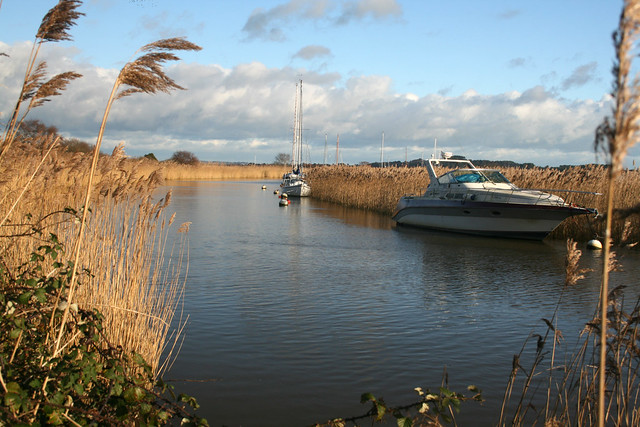 After a couple of miles I head reached the end of the path on the northern banks of the River Frome, as it now flowed out into the open waters of Poole harbour. I couldn’t really get a view of the harbour though. I now joined a track heading along the south edge of a gravel pit, although I don’t think gravel extraction goes on here any more. I was wondering if there might be lots of birds on it, but as you can see, it was devoid of any life. 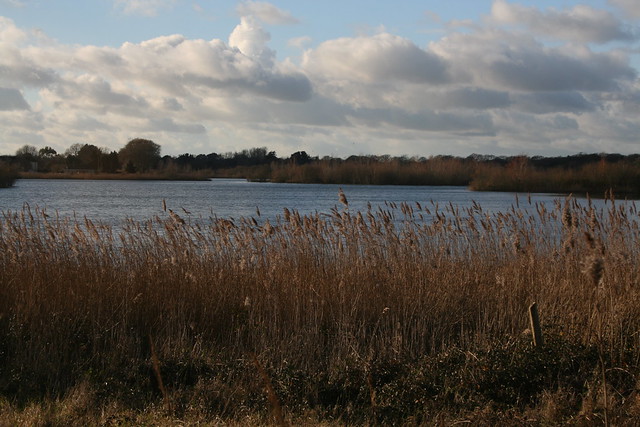 The path rounded this area of workings and to my right, but largely out of view is the second river that gives this walk it’s name of the Two Rivers Walk, the river Piddle. Although according to the map it has two names, the River Piddle or Trent, but I prefer the former. There is even a brewery locally that produces a beer called Piddle in a Bottle! Many of the villages locally have the name Piddle in their name from the river, but many more had them renamed to include the word Puddle rather than Piddle (such as Puddletown) because, as Wikipedia describes, “for reasons of social decorum”!

Although the river might have been out of sight, it’s waters weren’t as the path was once again very boggy. 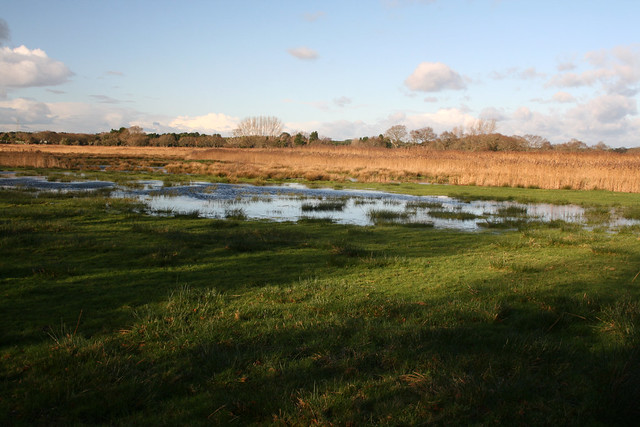 It was tricky to make it along the path here avoiding the water but the path soon enters trees and becomes a track and later a private road (though with a public right of way), meaning I had no more views of the river (or coast). This part of the path was clearly more popular with dog walkers though, probably because it was much firmer under foot. I followed this track until I reached the Wareham Walls. These grassy banks date from the 9th Century and were the original walls around the town. There is also a walk around these, which give good views of the town. I climbed up the bank and followed the path around to North Street, the main road through the town centre.

Here I turned right to cross the River Piddle via the North Bridge. There isn’t much of the river to be seen, but I could get a view of the flood planes of the river. 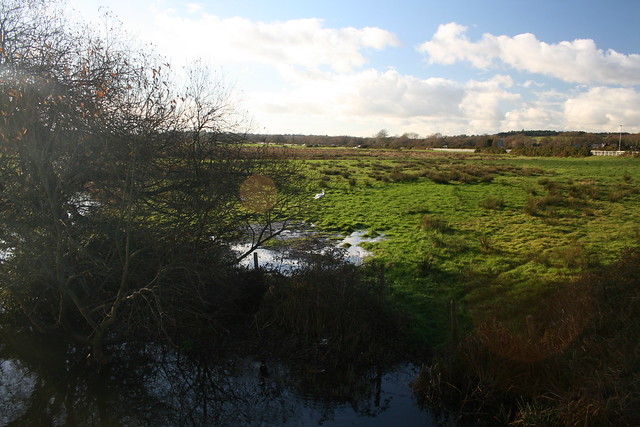 To the north of Wareham is a very large area of heathland and woodland with the various areas of woodland and heath generally referred to as Wareham Forest. It was nice to emerge into the woodland and ahead there was a path signed as the Sika Cycle Trail (of 7 miles). 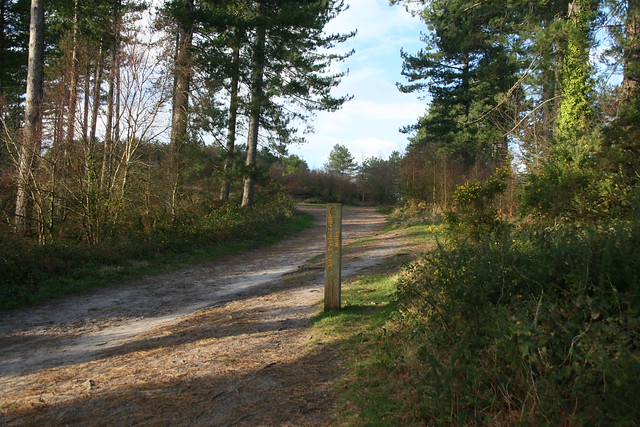 I was following the Poole Harbour trail which forks right off this trail heading north east initially and then turning to head north west along good quality tracks – a contrast from the earlier walk along the river!

It was absolutely beautiful in the low afternoon sun. 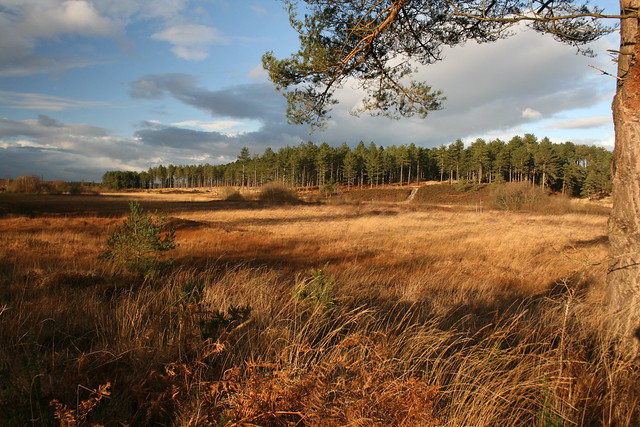 The path soon turned to the right to head east. As I said earlier, Wareham is very close to Sandford, but the Poole Harbour Trail takes a rather meandering route over the heathlands north instead, presumably to avoid a long walk along the busy A351, but I’m glad they did, it is a lovely unspoilt area. 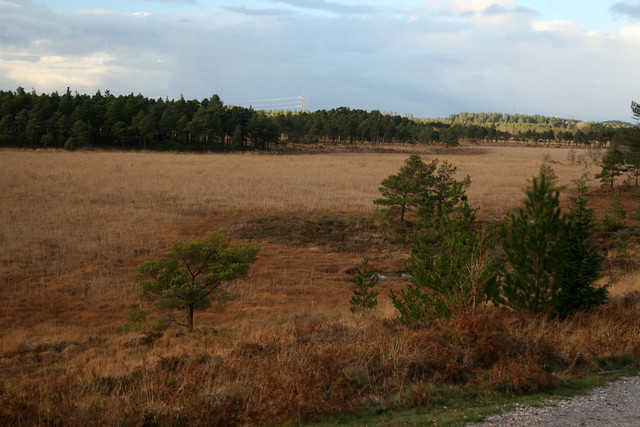 I soon crossed the dead-straight B3075 and crossed onto the oddly named Great Ovens Hill. 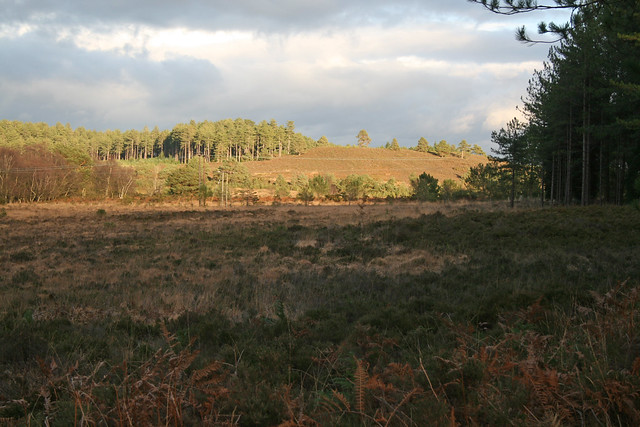 The path on this side of the road was a bit more boggy, but it was nothing compared with what I had put up with earlier! At the edge of an area of conifer woodland (Gore Heath) the path splits with the continuation of the main walk left or a short stretch of the path heading down to Sandford, which is the route I took – but not after wandering off the wrong way initially. I soon emerged back onto the residential streets of Sandford and followed the road downhill back to my car and drove back.

This was a very good walk with a wide variety of scenery. The river walk was a highlight particularly the stretch alongside the Frome, but it is a shame about the poor condition of the path (it seems it is a boggy mess in winter and overgrown in summer). North of Wareham, once the suburbs of the town had been passed through the heathland and woodland provided a pleasant contrast to the first part of the walk and more fine views. The only downside is there were no real views of the coast!

Here are the photos from this walk : Main Link | Slideshow

1 Response to 92. Wareham to Sandford