For this walk I am continuing along the Poole Harbour Trail following (roughly) the edge of Poole Harbour. It was a very cold but clear and sunny day (the sort of day that has been rather absent this winter) and I set off from near Christchurch to Wareham, which took around 45 minutes. I had some difficulty parking in Wareham. The first car park I entered was full up. As I pulled out of the car park I realised the street I was on was free of parking restriction and since there was space available I parked there instead, saving time and money.

Wareham has an attractive main street with a variety of shops. 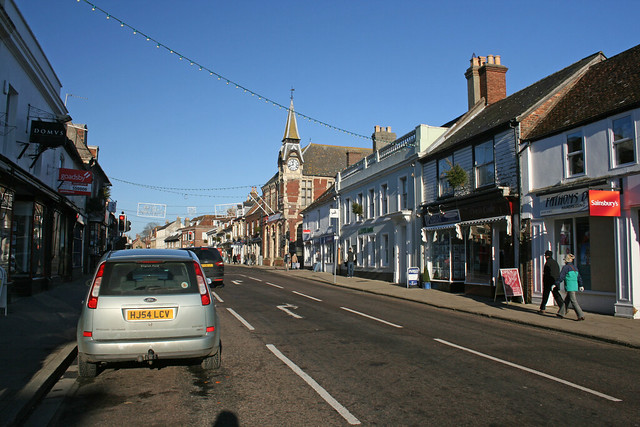 I headed south along the main street to reach the little market square beside the river. Two rivers flow past Wareham and out into Poole Harbour. This one is the river Frome, which goes to the south of the town and the other being the river Piddle, which goes to the north. Although mostly used for parking the square is nice and boat trips operate along the river from here during the summer months. 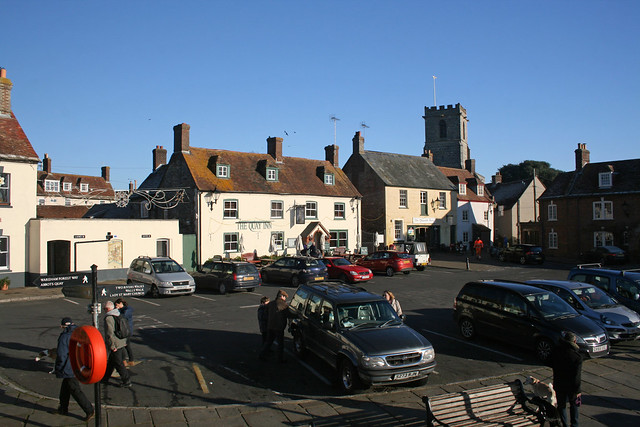 I crossed on the fairly modern bridge over the river getting a look east along the river as I did so. 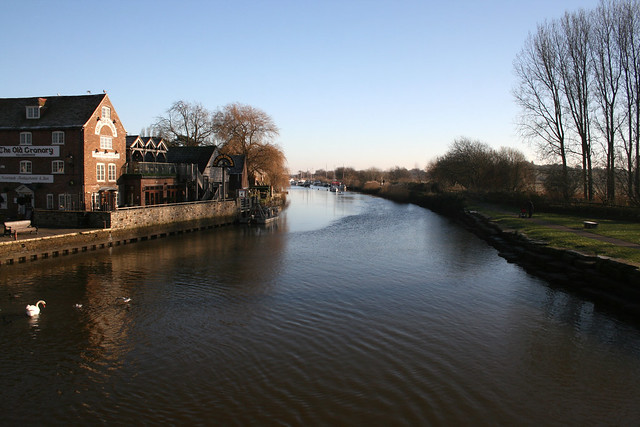 Once over the river, the Poole Harbour Trail initially shares it’s route with another long distance path, The Purbeck Way. The Purbeck Way is a nice walk too but not one I am going to cover here, but there is a website. There is an A4 leaflet to download on the site but Dorset County Council, (in what seems to me to be a typical display of incompetence) have messed up the site so that (on my computer at least), only the first word or two of each line display!

Returning to this walk, the path now runs along a wide gravel path on the south side of the river, offering a fine view back over the market square. 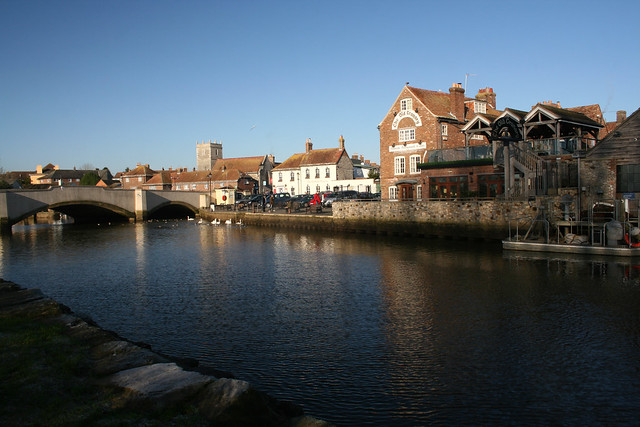 The river here is particularly attractive with numerous boats moored up on both banks of the river whilst the river itself is lined with reeds. 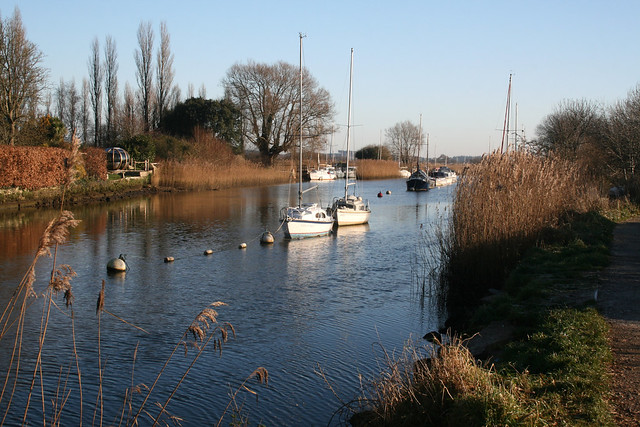 I was intrigued part way along to see what looked like an old paddle steamer moored on the other bank, although I am not sure if it is original or simply a replica. 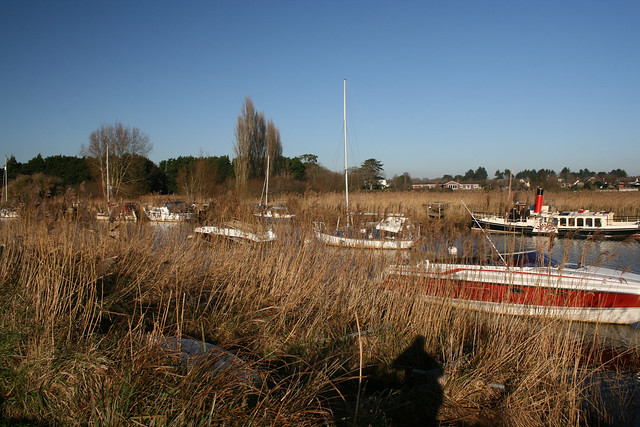 After around a mile I reached Redcliff Farm, where the Poole Harbour Trail leaves the banks of the river along a track. This means I have the opportunity for one last view along this pretty river. 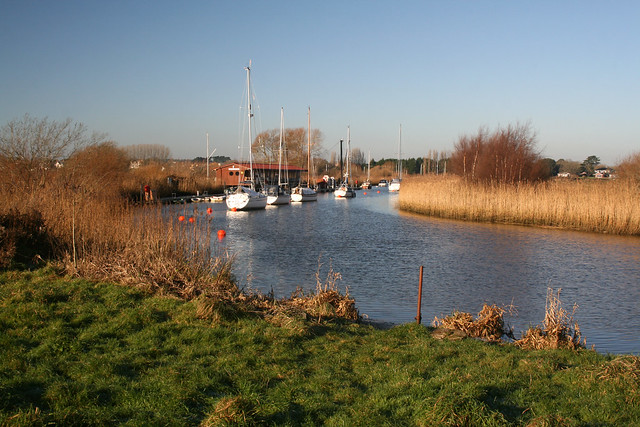 The view in the other direction was particularly peaceful with just a single boat and a line of buoys – presumably this bit of river is far enough from the town to be a less popular mooring location. 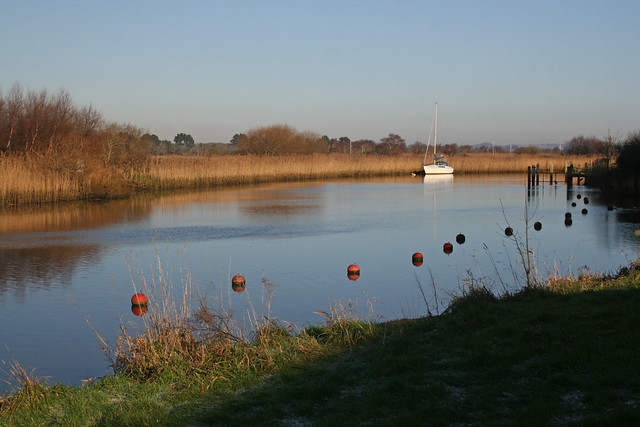 The path now follows the private road to reach the small village of Ridge, a curious name particularly since it does not seem to be on a ridge. From here I turned left along the road then right along Sunnyside, where it was indeed sunny. Here I cross the “main” road leading to Arne and come to Sunnyside Farm. Here the owners (I presume) have helpfully created a small public car park and a number of walking trails (not marked on maps) which is very good of them.

The path ahead followed an old tramway south, long since closed, but it provided a firm footing. It was called Sunnyside Walk. Clearly, they like their sun here! 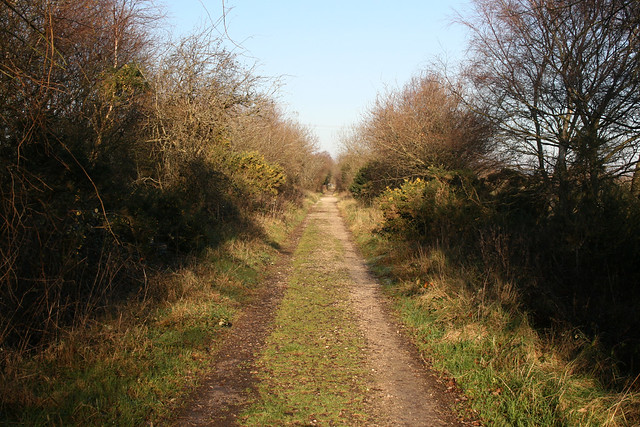 Soon the path was running alongside the open heathland of Stoborough Heath. Much of the land around Poole Harbour is heathland and it is very beautiful. I suspect it is even more so in the spring or summer when the heather is in flower. 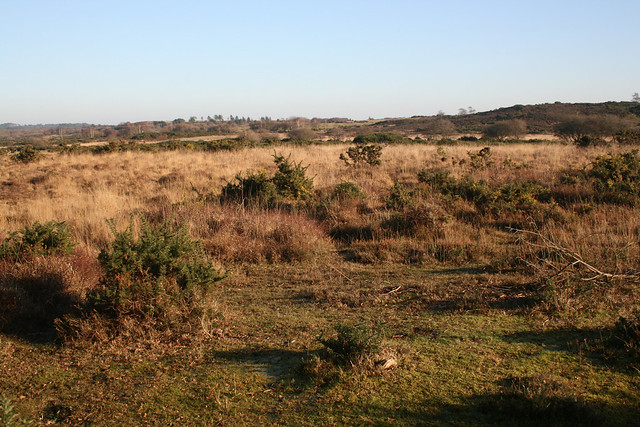 After a while the Poole Harbour trail forks left, off this old tramway to cross the heath. The path here was boggy and ill defined initially but on crossing a stream, it improved.

The path approached a small hill but then turned to the right before reaching it. I decided (since this is open access land) to go to the top of the hill for a view, and I was not disappointed. 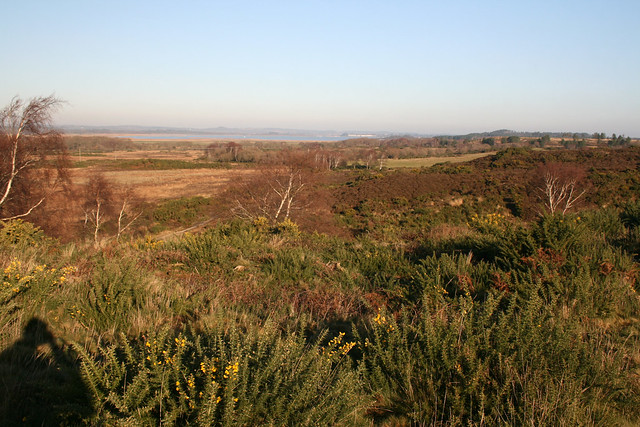 Here I could look out over the now distance waters of Poole Harbour across the heath and farm land.

Looking south I could see in the distance and in the mist, the ruins of Corfe Castle, my destination for the day. Most castles are built on hills, but here Corfe was actually built to protect a brief dip in the chalk ridge and hence is actually lower than much of the land around it. 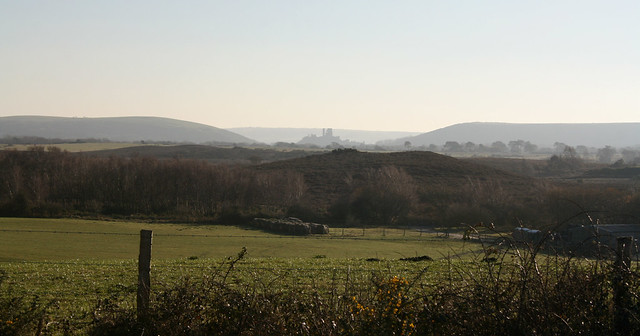 The top of the hill also houses some sort of monument, but the plaque on the stone was faded and impossible to read, so I’ve no idea what it was for. 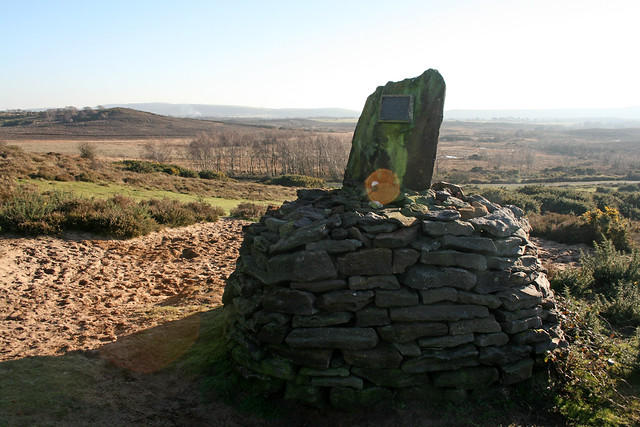 From this hill I returned to the correct path which now turned right to come out onto the minor road of Soldiers Road. From here I turned right with the path, which follows the road for around 400 metres. There isn’t a pavement, but it is not a busy road – only 1 car passed me in the time I was along the road. The path off the road was obvious, through a gate and up along a wide grassy track  which headed slightly uphill away from the road.

The height gained once more provided distant views of the waters of Poole Harbour. 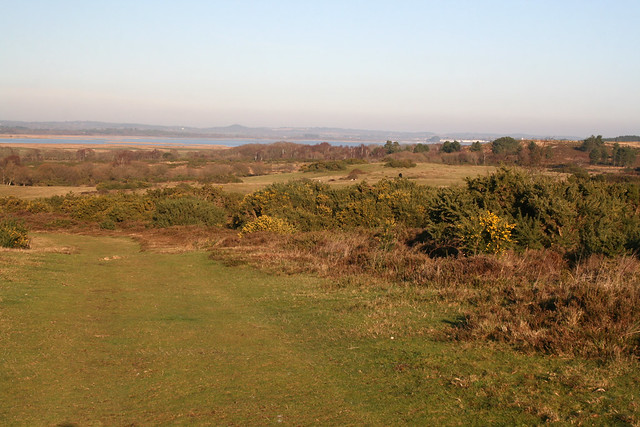 Approaching the main hill on Middlebere Heath, the path turns right crossing a stream on a little footbridge. The land around however was very boggy but some of it was still frozen from the night. 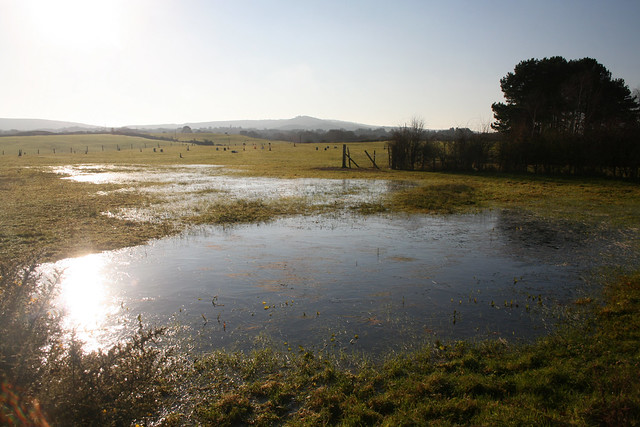 I continued on the main path over the heath for a while which was easy to follow, alongside a fence to my right, as it gently undulated over the heathland. 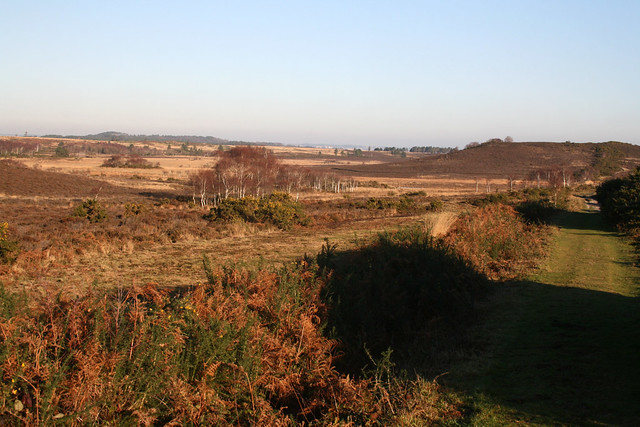 After a while though I came to a junction of tracks. 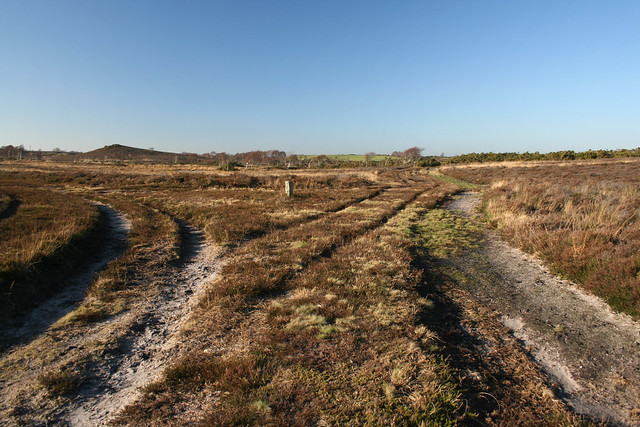 That stone post in the middle has a Poole Harbour Trail green arrow on it. But I didn’t notice it at the time. It signed me left, but I went right. I wandered along this path to reach the road. It was only then that I realised I had gone wrong, so I headed back and this time spotted the arrow. So I turned the right way now and headed north east over the heath.

It was beautiful in the low winter sun. 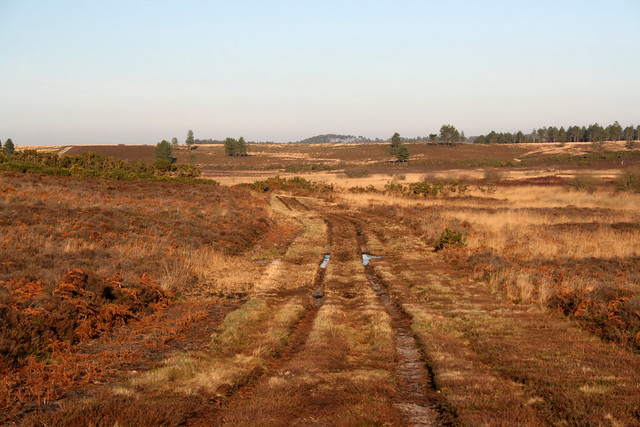 This time I reached the road in the correct place, crossed and carried on along the track leading to Middlebere Farm. To be honest I can’t really work out the point of this part of the Poole Harbour trail. It heads north along this track for a few hundred metres, but then you come to a gate with a sign saying you can go no further (I think it is private beyond). So the path almost doubles back and now heads south and a bit further east. It ends up joining the same road, but a bit further south of where I left it earlier. I am not sure this part adds anything to the walk, really, but I didn’t know that at the time, so I followed it anyway.

The moorland here felt quite remote, with it being mostly trackless and free of buildings. Heading south, I soon joined the route I had followed on the previous walk out of Corfe Castle. But the conditions were better today making for fine views over the sometimes bleak heathland, it felt a bit like moorland other than it was not so hilly. 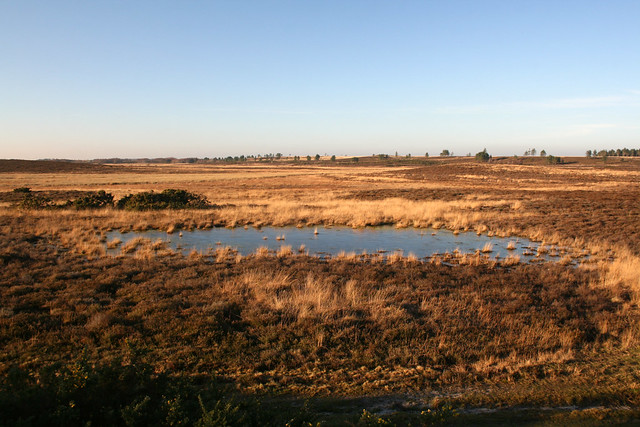 Soon I was back on the road again this time heading south, for Corfe Castle and I got a view to the left over the Corfe River. I suspect there is often not so much water visible but it being winter, it had been quite wet. 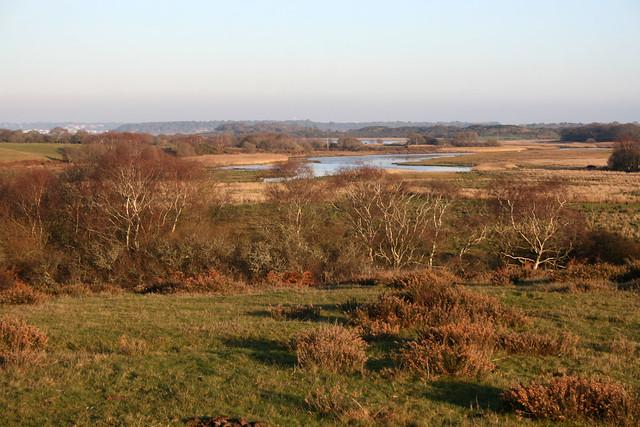 I continued on the road to Scotland Farm, an attractive farm with a thatched barn. I think it is owned by the National Trust and leased to a tenant, perhaps the man I could see pushing a wheel barrow. It looked like not a lot had changed in hundreds of years! 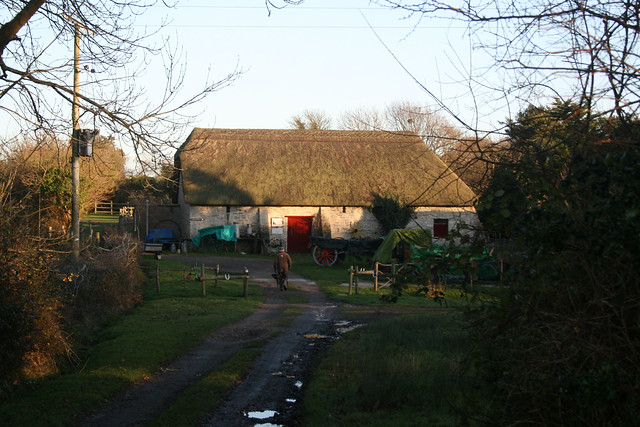 I continued south over the boggy common at Norden, as I described last time and soon had the railway line ahead and views of the ruins of Corfe Castle on top of the hill beyond. The low winter sun created a large contrast though, which made photography tricky. 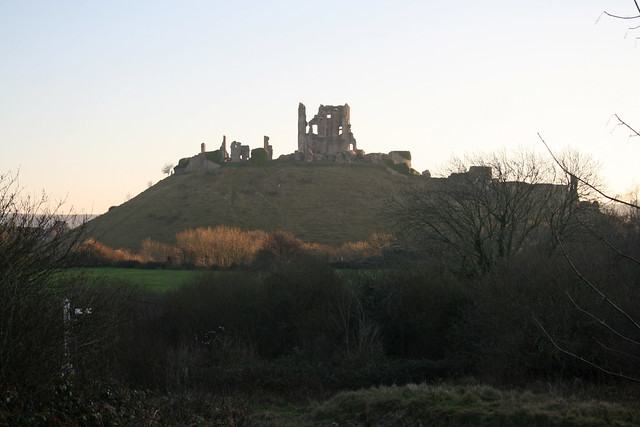 I followed the path to cross the railway and head down the steps into the visitor centre car park at Corfe Castle. From here I crossed the road. Since there was a bus stop opposite I stopped there to check the times. As there was a bus due in about 10 minutes I decided to wait here rather than head further south into the town.

It arrived on time and soon took me back to Wareham.

By the time I got back the sun was just about to set, bathing the town in a lovely red glow. The square by the river was particularly pretty. 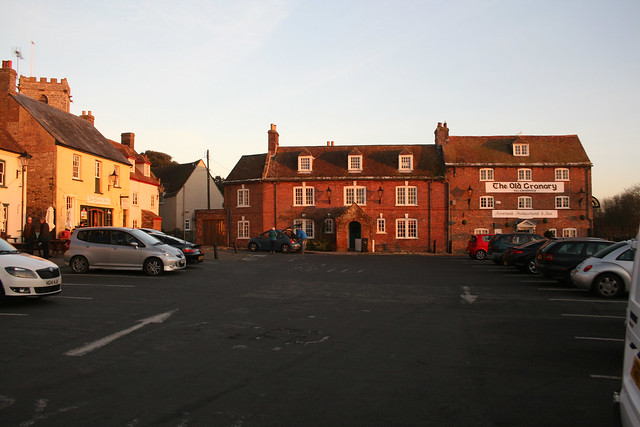 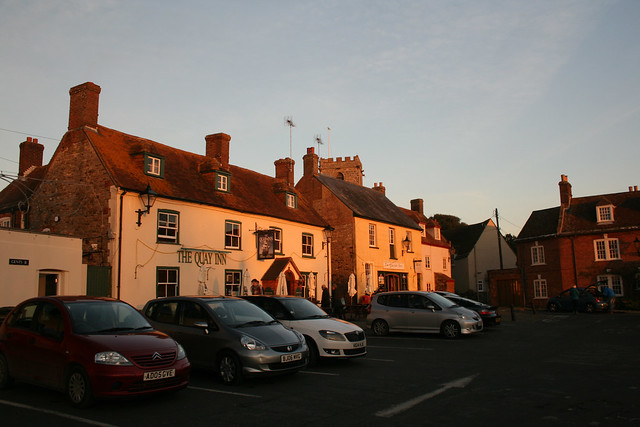 I took one last view of the sun setting over the river. 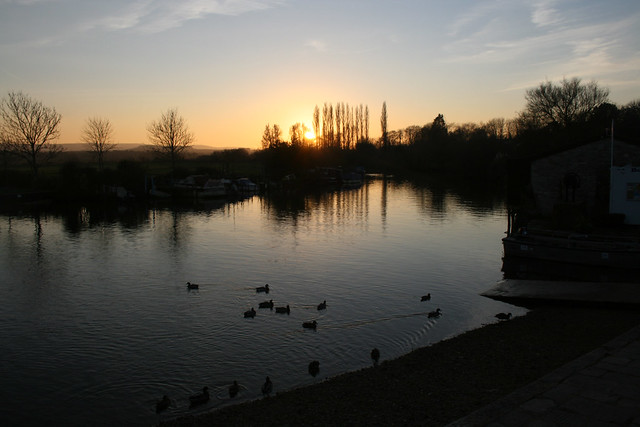 From there I headed back to where I had parked my car and drove back, keen to get the heater going, as it had got cold quickly once the sun had started to go down.

I really enjoyed this walk, it was for the most part rural and remote around the heathlands of Poole Harbour. My only real disappointment was that it was not that coastal. Although called the Poole Harbour trail, I had only had distant views of the harbour and most of the water I saw was in fact that of the River Frome.

Here is the details of the public transport needed for this walk:-

Here are the photos from this walk : Main Link | Slideshow.