Anyone who saw where I finished the last walk I wrote about might have guessed I’d be going to an island next. You guessed right there. But it might not be the island you expected – this isn’t a post about Portland (but I have walked there too, so I will be writing some posts about Portland).

Instead, there are some more British islands to which Weymouth is roughly the closest point (and until earlier this year, the main ferry port). I’m talking about the Channel Islands, an archipelago of islands which are in fact much closer to France than they are to Britain. Over the course of history they have been considered both French and British territory. They also have a complicated legal status (which I admit I don’t fully understand), in that they are a crown dependency and not part of the United Kingdom.

This means going to them is stretching my definition of the UK coast a bit but they do have a coastal path of sorts, The Channel Island Way, a 110 mile route which largely covers the coasts of the islands, although this route did not exist when I walked around Jersey. There is a guidebook available, too. Well when I say available I meant that it exists – but with a quick internet search, I haven’t actually been able to find anywhere that has it in stock. Probably the Tourist Information centres on the islands have it in stock though.

Until earlier this year, ferries sailed from both Weymouth (year round) and Poole (summer only), to the Channel Islands (I remember there used to be a service from Torquay, too). Therefore I will write about Jersey now that I have reached Weymouth and the Bailiwick of Guernsey (the islands of Guernsey, Alderney, Herm and Sark) when I reach Poole.

Before I start it is perhaps worth getting a few facts and (hopefully) useful bits of information about Jersey if you are planning to visit or just curious.

Although I’ve written about this walk from Weymouth I didn’t actually travel to Jersey by ferry but by plane. Unlike my previous walks I went to Jersey with a friend of mine, Alex, and we walked around the coast of the island together.

I picked Alex up and drove us down to Bournemouth Airport, which was then a small friendly airport (it has since been purchased by Manchester Airports Group and has made some rather unpopular and controversial changes, including a compulsory drop off charge, higher parking charges and the blocking up of the pavement and banning of pedestrians walking to the airport). It took a little under 2 hours I think. Helpfully then the long stay car park was just a minute or two walk from the terminal and fairly reasonably priced, so we had just a quick walk to the terminal.

We travelled on Blue Islands who at the time operated the Bournemouth to Jersey route using a little Jetstream plane (which at the time was the smallest I had been on). Since then this route has closed down, although it is once again possible to fly from Bournemouth to Jersey, as Flybe (who used to be called Jersey European Airways) began operating this route earlier this year. It was a quick checkin, although the man behind the checkin desk had to take our photos first. We were camping on the island and Alex had bought the tent (which was borrowed from another friend). Usefully (and unusually) Blue Islands didn’t (and still don’t) charge for excess baggage, so we didn’t need to worry about the weight of our bags.

We went through to checkin and when the flight was called were amused to notice it was the same man that checked us in who was now at the gate. We were beginning to wonder if he was also going to pilot the plane (but he didn’t). We were soon lead out to the little plane. 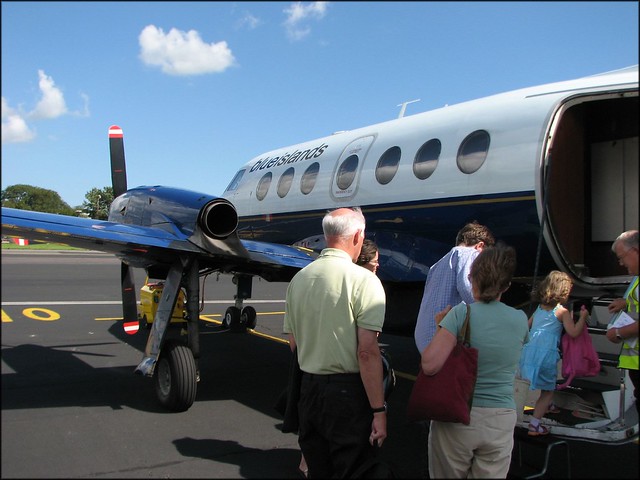 I was also pleased to see the crew kept the curtain between the cockpit and passenger area open, so we could see in the cockpit throughout the flight too. 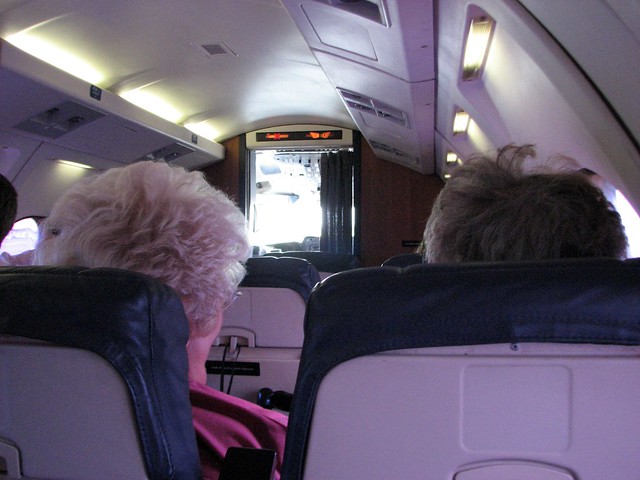 The Dorset coast is one I know well and never having flown from Bournemouth before I enjoyed spotting places I know well. Here is Poole Harbour with the large island being Brownsea Island whilst the smaller island to the left of it is Furzey Island and further left of that is Green Island. Further north you can also see Round Island and Long Island (actually one island). At the bottom is the millionaires playground that is Sandbanks. 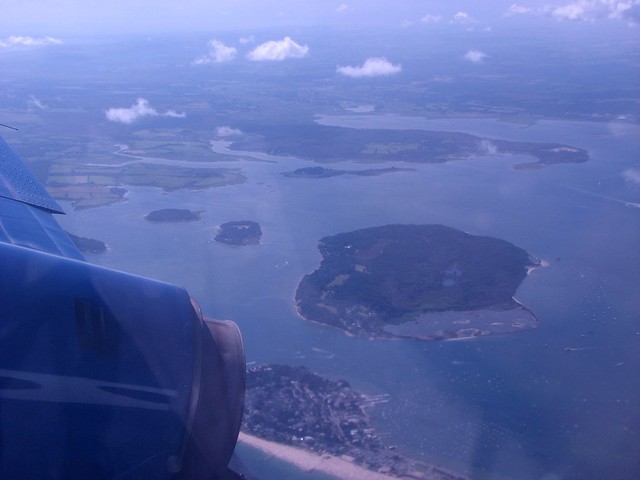 Soon we were passing Swanage, and you can see Durlston Head and the Isle of Purbeck here whilst if you look closely the dark area near the top is Portland. 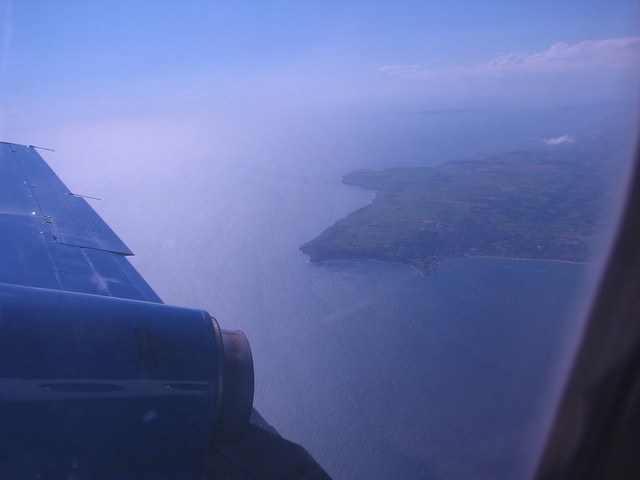 After that we were crossing sea for a while until we reached the first of the Channel Islands, Alderney. 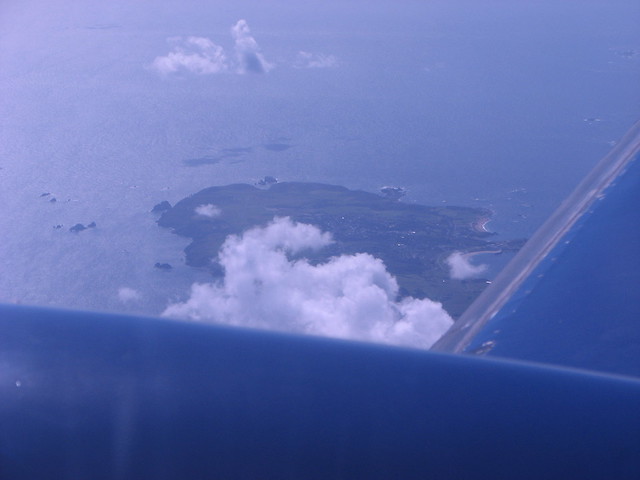 Shortly after we had reached Jersey, only taking a little over half an hour from Bournemouth. 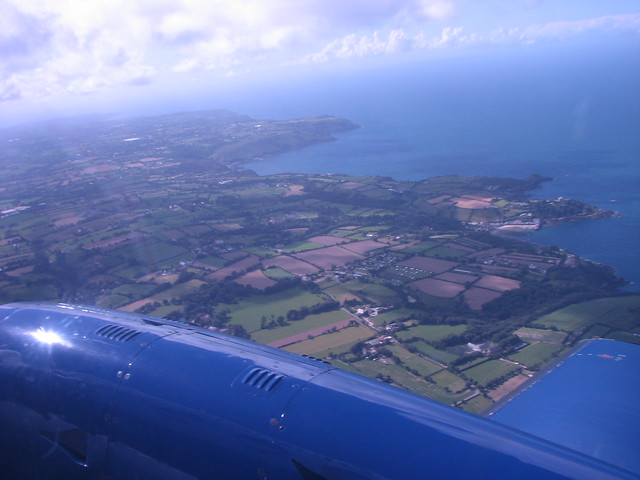 We were soon on the ground. 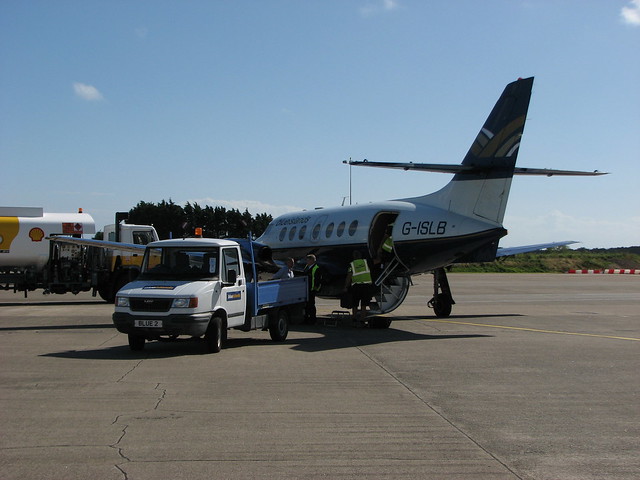 The advantages of flying on a small plane soon became apparent, as we had our bags only a couple of minutes after we entered the terminal. We were staying at the Rose Farm campsite on the island, which is close to St Brelade and St Aubin on the south of the island and helpfully for us on the bus route between the airport and St Helier. Sadly the campsite closed in 2010, although there are other campsites on the island. Plans to build houses on the site were turned down in 2012, so I don’t know what has happened to it since.

I had been to the island before, but neither of us had been to the campsite before so we asked the bus driver to tell us when we were there. Part way along the route he stopped at a stop where no one got on or off. We then carried on and it was only when we passed the sign welcoming us to the next village, St Aubin, I realised we had passed the site – the driver had stopped at the stop but not actually told us we were there! Frustratingly we therefore had to walk back up the hill with all our camping equipment. We had picked up the free map at the airport (which turned out to have the footpaths on too, so we used that map throughout our trip) and spotted an old railway footpath we could follow part of the way back to the site. We soon managed to find the site and were shown to our pitch. Alex set up the tent whilst I filled in the required form at reception (a requirement of the Jersey Government I think).

We had taken a mid-afternoon flight so did not have time to start the coast walk yet, but we did walk down to the nearest beach, St Brelade Bay to have a little preview and for a meal once the tent was set up. It is a beautiful beach. 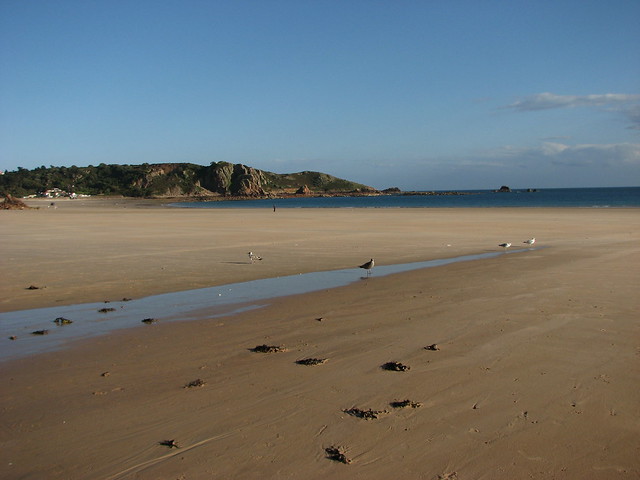 The gardens behind the beach were also very pretty and the palm trees made it feel a little tropical! 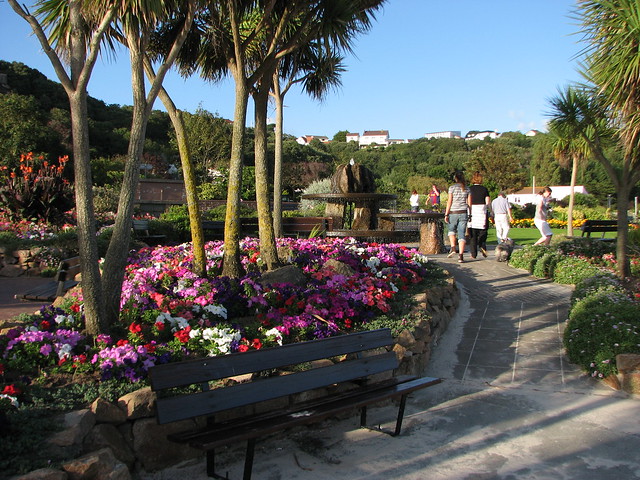 After dinner we had a little walk along the beach until the sun went down and then headed back up the hill in the dark to our campsite – thankfully Alex had bought wind up torches, so we could find our way back. The next day we started our round the island walk.