As I mentioned in my previous post, the western end of the Fleet lagoon behind Chesil beach is occupied by the Abbotsbury Swannery. This means the coast path is routed further inland. However that does not mean the western end of The Fleet is inaccessible, but it does mean that you have to pay to access it.

Of course the main attraction here it to see the swans (and Geese, as it turns out) and particularly when there are baby swans to be seen. So I decided to pay it a visit and going in June I hoped there would still be some baby swans present.

I took the train to Weymouth and then transferred onto the Jurassic Coast bus (route X53) which took me on to Abbotsbury. From where the bus dropped me it is about a 20 minute walk (partly along the coast path) to reach the Swannery car park and entrance.

The first surprise was the entrance fee. I think then it was around £10 – now it is £11.50 which I felt was quite expensive, as it is not that big a site. You do however get 20% off you book at least 2 days in advance, but I’m afraid I wasn’t that organised. Although if you do come by car, the car park is free, so at least that is not an extra expense.

Once into the sight it was split into two sections. The first part was the pens. This where swans that need extra treatment (usually as a result of injury or illness). To be honest I felt a bit sorry for the swans here. Not only are they ill or hurt they get the public in staring at them every day. Thankfully we do not do the same in our hospitals! 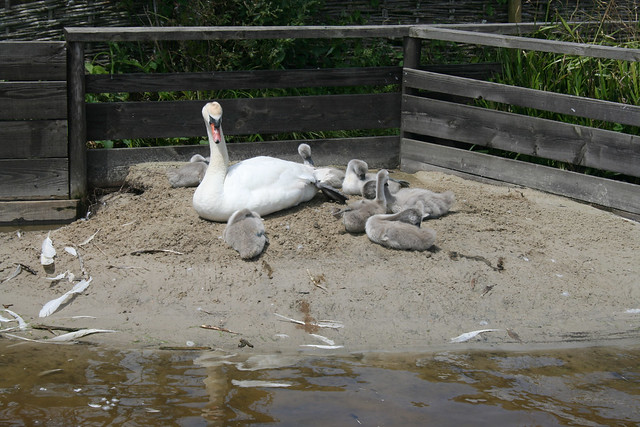 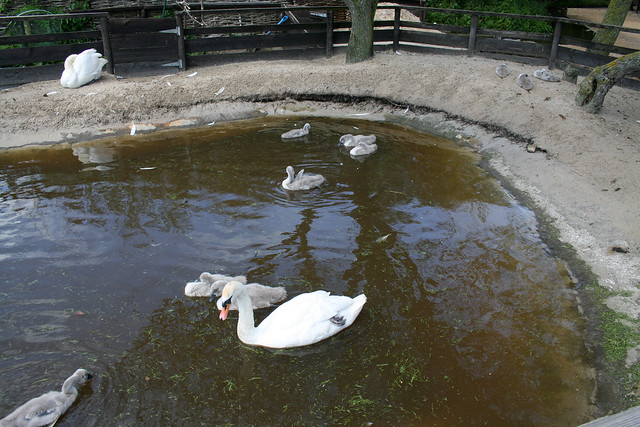 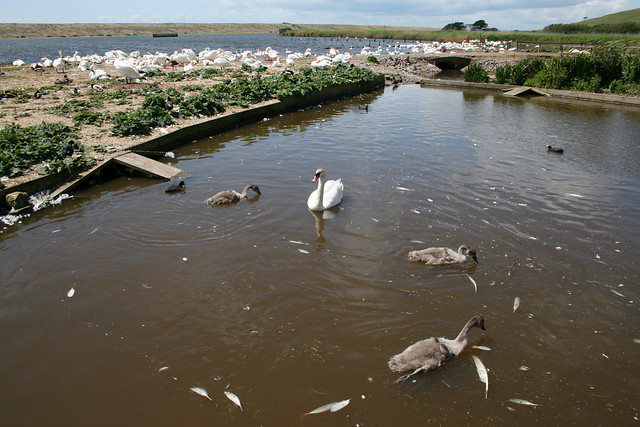 There are paths between the various pens, each giving a story about the swans in that pen, many of whom had rather cute babies with them too. Further down you reach the edge of The Fleet, where you can see Chesil Beach beyond and of course the many more swans who are not injured but have found this a rather convenient place to live, and who can blame them with the sheltered water of the Fleet and a ready supply of food at hand. Of course it was not always this way – the Swannery was originally set up by the monks of the Abbey as a source of food.

There is more here too rather than just the swannery. You can pick up a bag that is the same weight as a swan – and I can assure you that a swan is really rather heavy.

I was also aware that there had obviously been quite lot of activity here during World War II there was another surprise. The Fleet was used as a test bed for the Bouncing Bomb, and there is a prototype here as well as some old photographs. The bomb is most known for it’s use in the Dambusters raids during World War II to damage dams in Germany.

Of course that was not the only thing I was here for. The access to the Swannery allowed me to reach the back of the Fleet here and although there was not much walking possible it was quite beautiful, helped by the fact it was a lovely day and there were so many swans (and geese) to be seen. 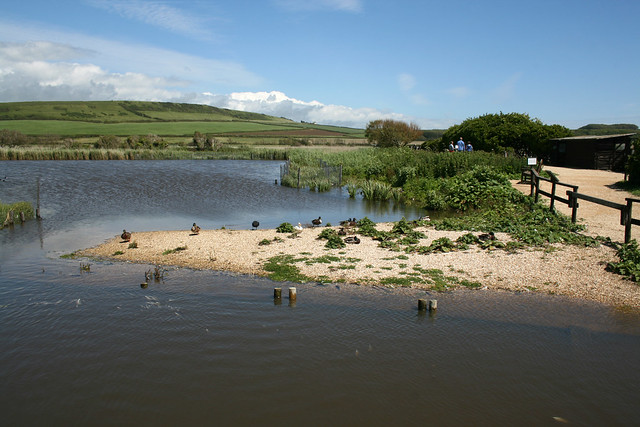 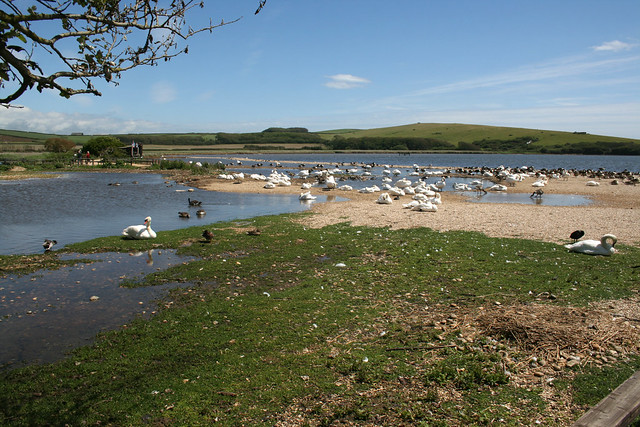 Many of the swans were standing around or eating but many more were enjoying a nice doze in the sun. 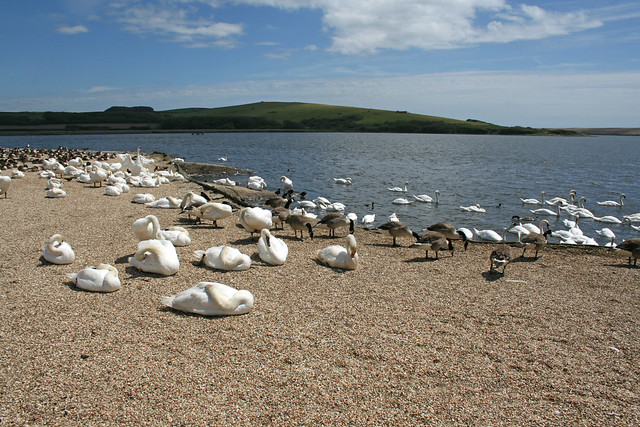 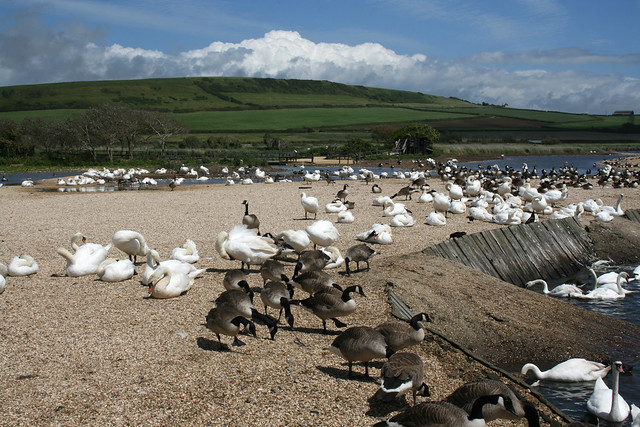 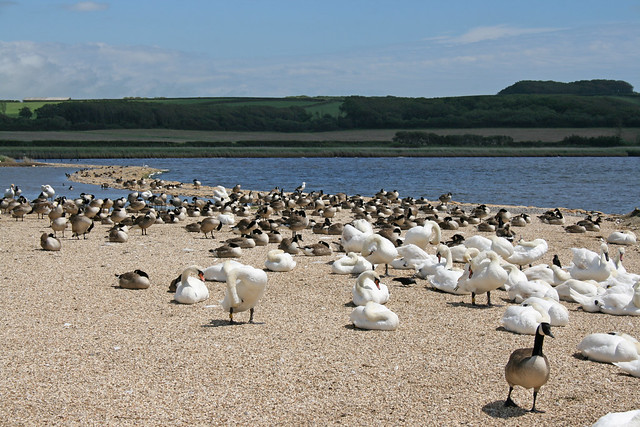 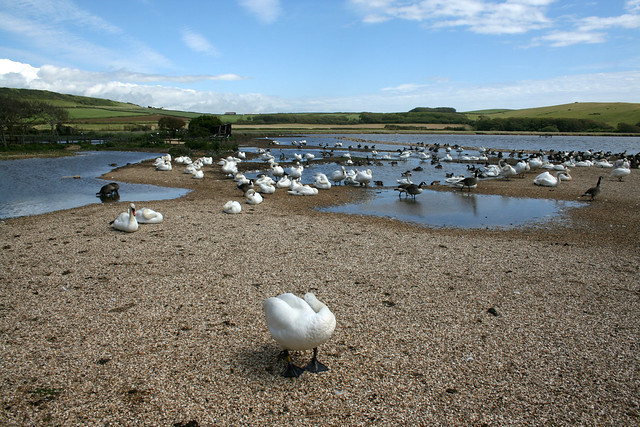 The popularity of the mud and beach behind the fleet meant you did have to be a bit careful where you put your feet, though. 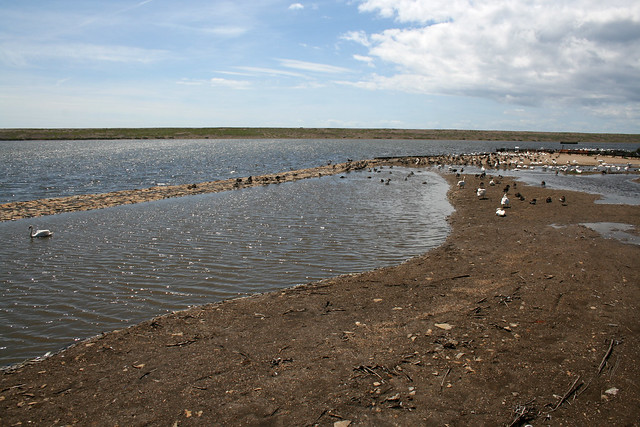 Whilst some sections (as above) are largely open water, other parts were full of a network of reeds which the swans seemed to be enjoying swimming between. 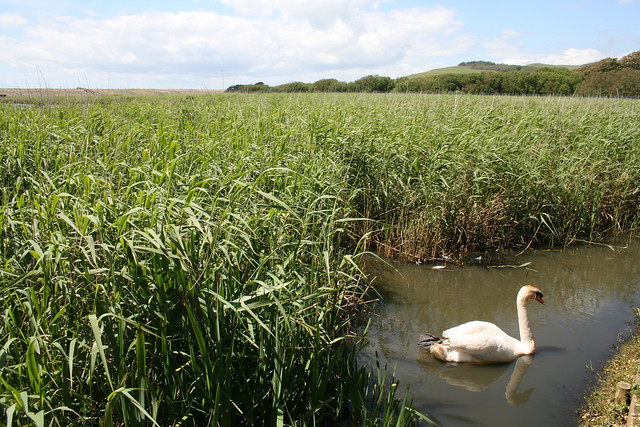 All in all it was an interesting place to visit which I can certainly recommend. As I mentioned before the price was a little steep so I suggest booking in advance on the website if you can.

This entry was posted in Dorset and tagged Abbotsbury, Abbotsbury Swannery, Chesil Beach, Coast, Dorset, The Fleet. Bookmark the permalink.