his was a walk I did many years ago when I lived in Exeter.

It turns out that Dartmouth is not very easy to reach by public transport from Exeter. The town was famous for having a railway station but never having any trains. The reason was that the railway line was constructed along the eastern side of the river, in the town of Kingswear. A ferry linked Kingswear to Dartmouth, operated by the railway company, so the station in Dartmouth was built to serve the ferries to Kingswear for the train onwards.

The station still exists, but it is now a cafe. The railway line has a slightly different story. Having been run down by British Rail it was proposed to close the line. Instead the line was purchased before it was closed by the Dart Valley Light Railway who purchased the line to operate as a heritage steam line, a situation that continues today. This does however mean it is no longer part of the National Rail network and a separate ticket must be purchased. This was costly and in any case I was before the operating season of the steam railway. So I ended up going by bus. I bought a day explorer ticket for Stagecoach buses and first took the X46 bus from Exeter to Torquay (then it was a coach, running every hour – now it is an ordinary bus running less than hourly). From Torquay I took bus number 12 on to Brixham. Then another bus from Brixham to Kingswear. Finally, the ferry over to Dartmouth. It was not an easy or quick journey and I was keen to get walking and stop riding on buses! What a shame the direct train no longer ran to Kingswear.

This walk was some time ago and I have only limited notes and some scanned in photos from prints (this being before digital cameras were affordable) so apologies for the poor quality of the pictures.

Dartmouth is a lovely town located, as you might expect, near the mouth of the River Dart. It is very much a boaty town with boats moored all along the river and the large Britannia Royal Naval collect on a hill overlooking the town. It also hosts a famous regatta in the summer months. I had stayed on a family holiday in Dartmouth a few years previously and loved the town. It might lack a beach, but it is very pretty. 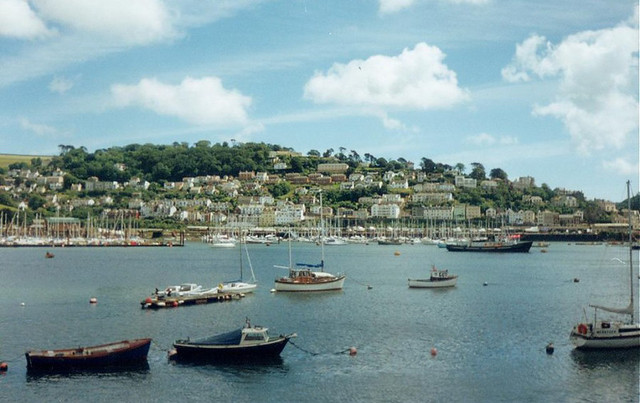 I had a bit of a look around the town before beginning the walk. 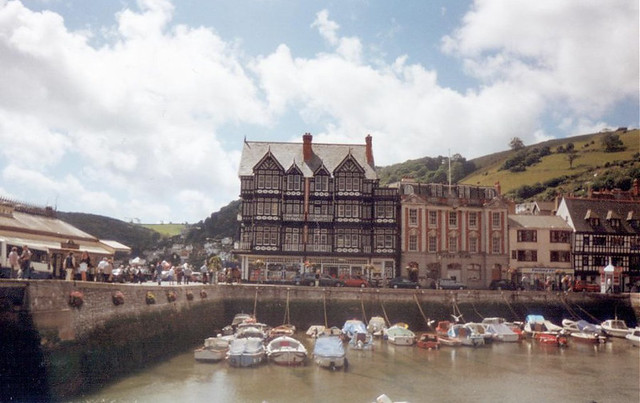 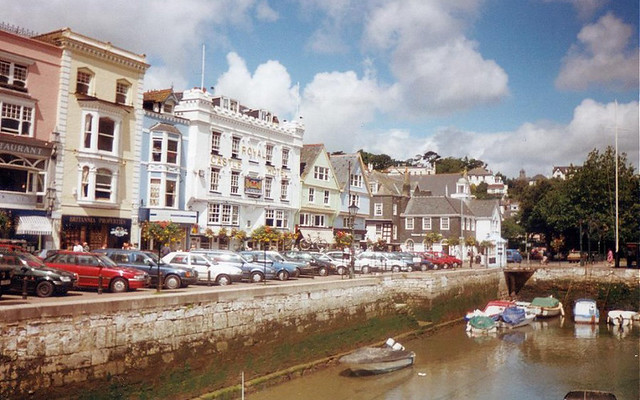 I followed the road south where there was a promenade. This soon comes to the Lower car ferry. This is one of two ferries that cross the river Dart between Kingswear and Dartmouth as there isn’t a bridge. I’ll leave you to guess what the other ferry is called! I had to follow the road here around the ferry and then resume on the promenade to Baywards Cove fort, the outer walls and remains of a castle. From here I had to follow the road around to Warfleet where I could turn off on a more minor road Here I could follow this road out to Dartmouth Castle and the church. It was a relief here to finally be off the road for a while. 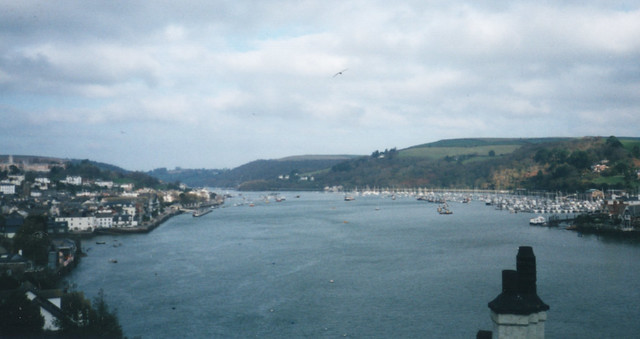 The castle is now owned by English Heritage and open to the public. But conscious of the need to catch the bus back from Torcross later in the day I didn’t stop. There were I seem to remember steps down to a beach here too. Ahead there were views of the mouth of the Dart and the smaller Kingswear Castle on the other bank, which were built to guard the river Dart. This castle is now a holiday cottage! 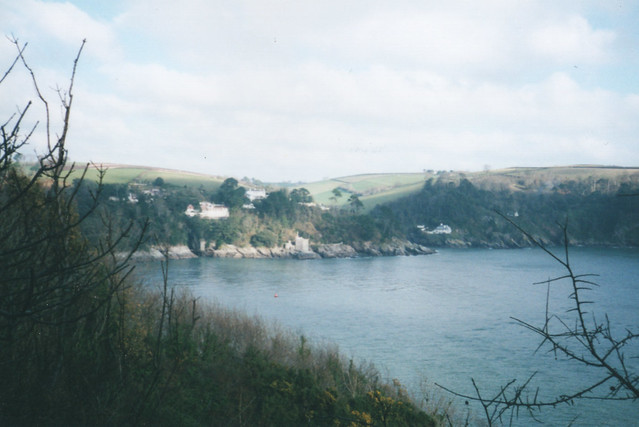 The coast path soon began to climb out of Dartmouth offering nice views of the estuary and soon the undulating coast ahead. 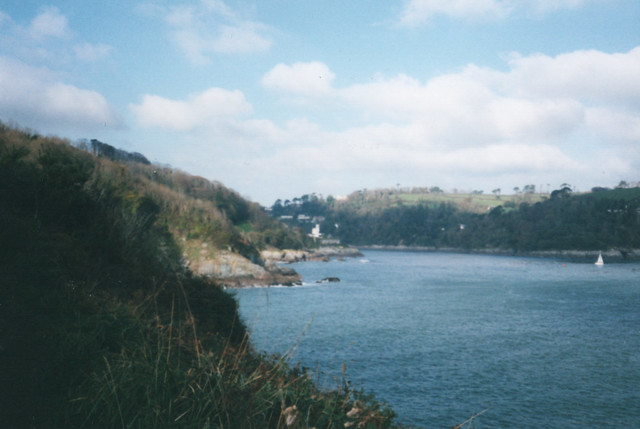 Soon I rounded the corner and lost the views over to Dartmouth replaced with a view of the coast towards Stoke Flemming. 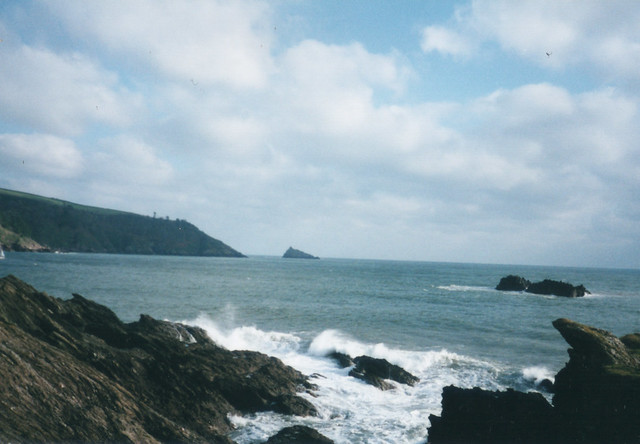 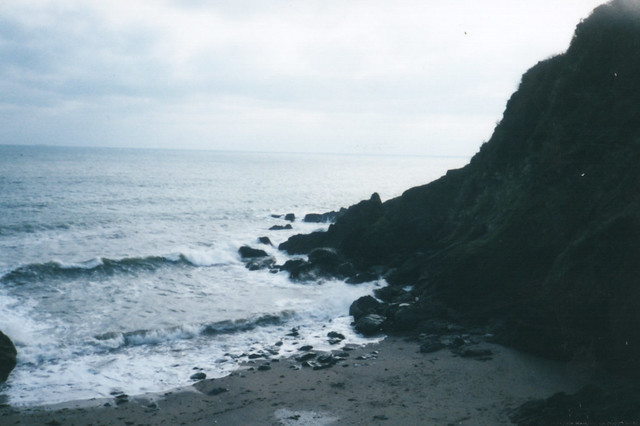 The path goes behind the little beach at Compass Cove, although there is a path down to the beach. Beyond the beach the path climbs to Combe Point and then Warren Point from where there are great views west. 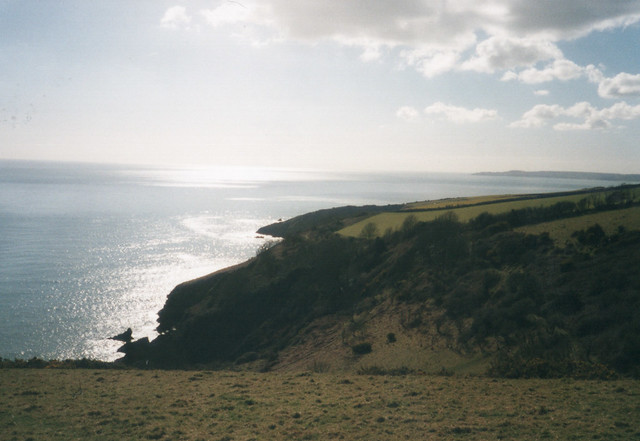 I was getting tired by this point as the walk had been quite hilly and I wasn’t used to it, as I didn’t used to cover such distances then. Sadly just after Warren Point the coast path headed inland along a track to the road which I have to follow into Stoke Flemming. I don’t remember a lot about Stoke Flemming I’m afraid. But the coast path beyond follows a minor road. However I decided to stick to the more coastal route, the A379, having become frustrated with the inland walking. This was not especially pleasant as the road was narrow and there was quite a lot of traffic. Soon I was approaching Blackpool Sands. Not to be confused with Lancashire, this is a good sandy beach which is backed by woodland and faces south east, so is generally sheltered from the prevailing wind. 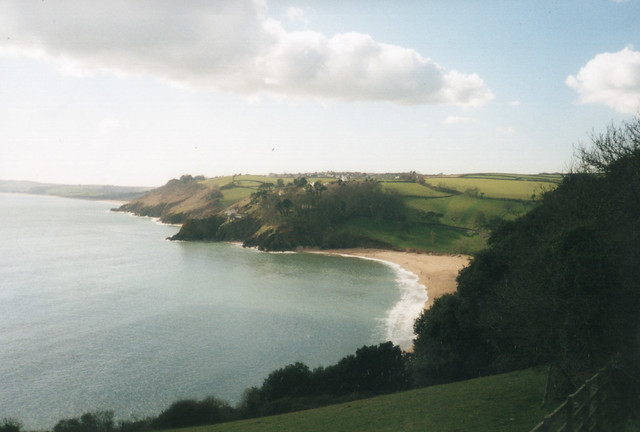 The beach has coarse sand and a little stream forming a small pond at the back. There is also a cafe here, another Venus cafe.

It’s a lovely beach and being backed by pine trees it looked like summer, as the trees were not bare here. The coast path does not go down to the beach, but there is a path to the beach which I followed and stopped for a rest. I remembered coming here on a holiday previously and was glad to see it had not changed. 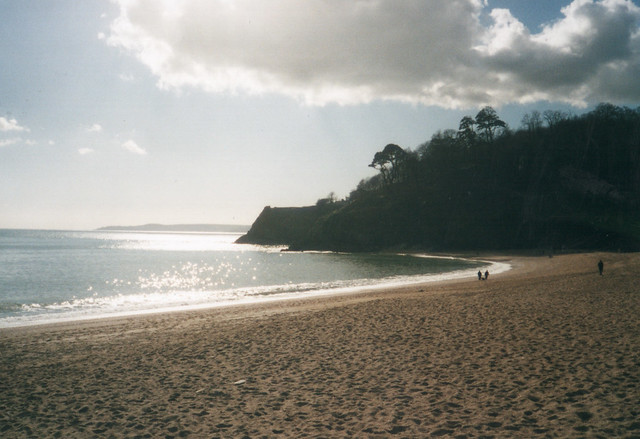 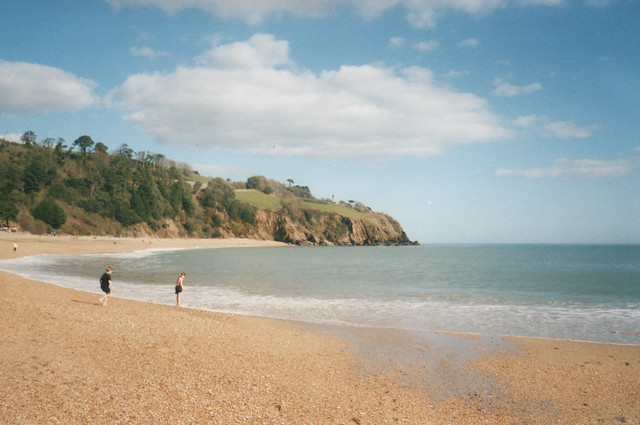 The coastal path beyond Blackpool Sands headed up the road and then off slightly inland. 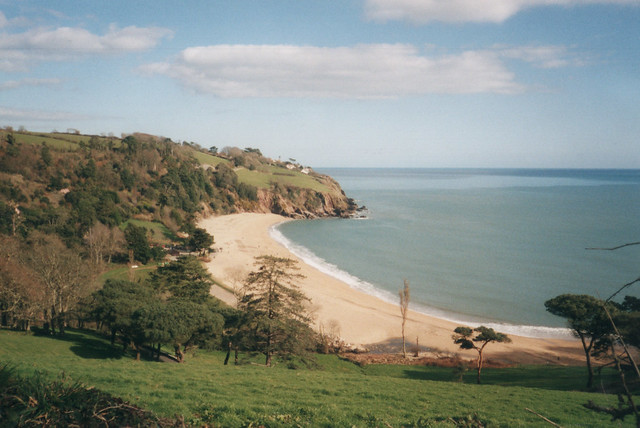 Once again I stuck, perhaps unwisely, with the A379 before following the official coast path which headed into the village of Strete.

From this village it is, once more, a trudge along the A379, which is a shame. I was getting pretty fed up with this road by now! Soon the path descends to the shingle and sand beach at the north end of Slapton Sands. Here I could at long last leave the road and walk on the beach although it was hard going along the beach in places, as it’s partly shingle. 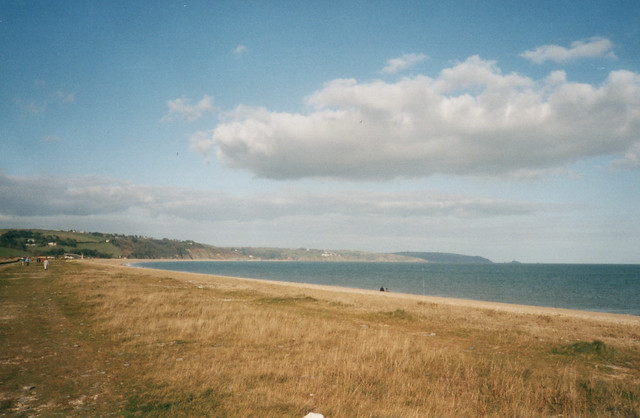 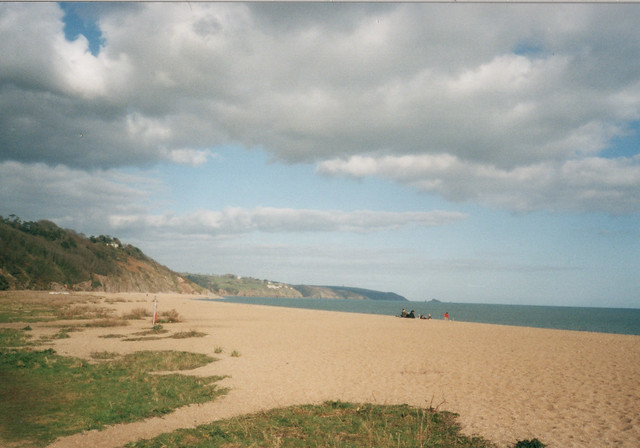 The beach here is backed by the largest freshwater lake in the South West, Slapton Ley and it feels a little like Chesil Beach in Dorset, albeit on a smaller scale.

The beach has an interesting history, as Operation Tiger took place here which was one of a series of rehearsals for the D-Day invasion of Normandy. Unfortunately, all did not go smoothly with some of the troops killed by friendly fire and the following day by German boats. The survivors had to be sworn to secrecy because of concerns of possible leaks. Heading further south soon passing Slapton Ley I then passed the memorial to this sad event. Just beyond this I reached Torcross and the end of the walk. 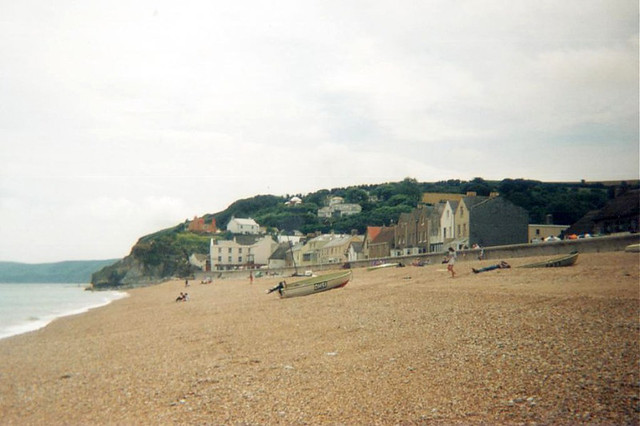 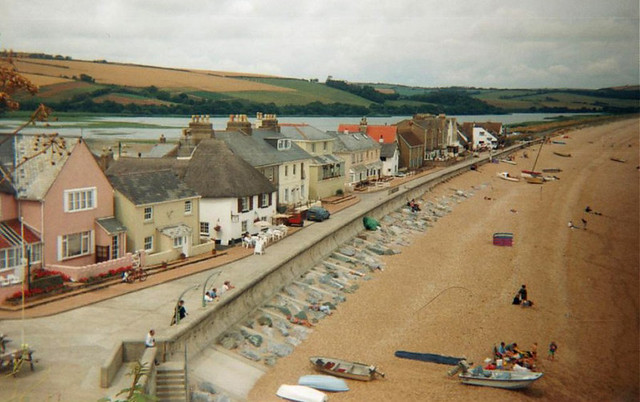 This is a pleasant walk which is not as long or demanding as some on the coast path but was rather marred by the amount of road walking, especially those bits on the A379. I think the route has been improved a little in recent years, so less of it is on roads, which probably makes it a better walk. There are some nice beaches to enjoy on the way too, most notably Blackpool Sands.

Here is details of the public transport needed for this walk:-

Here is the complete set of photos for this walk : Main Link | Slideshow

1 Response to 67. Dartmouth to Torcross