Continuing my tradition of visiting every island I pass (despite saying at the start that I would not do this), there is an island just off Bigbury-on-Sea. This is Burgh Island and unlike many islands, this is a tidal island, meaning it is only an island at high tide, it being possible to walk to the island at low tide.

The island houses a (very expensive) hotel and to provide access at all times there is a sea tractor, which can access the island even at high tide. This is a bit like a tractor, but where only the wheels are at ground level, the rest of the machine being raised above the water essentially on stilts. It is an unusual sight.

I was staying in South Devon and in fact down here to complete my last walks on the South West Coast Path (which I have not walked in order). I decided whilst here to take time out to visit Burgh Island too, as it looked (and indeed is) very attractive.

I was staying at the Higher Rew Campsite near Salcombe, so had only a fairly short drive down to Bigbury-on-Sea. Sadly the free car parking spaces I used last time were all full and not wanting to pay the expensive parking charge at the main car park, I opted for the “Economy Car Park”, which was about 5 minutes walk up the road in a field, with payment via an honesty box (I think it is attended in peak season).

I followed the path down through the village back to the beach and arrived at the end of the car park a little after 9am. Unlike previous walks, it was a glorious day so at last, on my 3rd attempt, I got to see Bigbury-on-Sea in glorious sunny weather. Looking out to the island I could see there was plenty of sand, making for an easy walk out to the island .The view of the island is dominated by the art-deco Burgh Island Hotel. This hotel opened in the 1930s, although it was occupied during World War II. The hotel was popular with Agatha Christie who used it as inspiration for some of the locations she wrote about. Today the hotel is very exclusive, with the cheapest rooms coming in at £400 a night. Also on the island are a couple of houses and a pub, the Pilchard Inn. This is a pub rumoured to be 700 years old.

The island was already basking in the sunshine of this glorious day and looked very inviting over the sands. 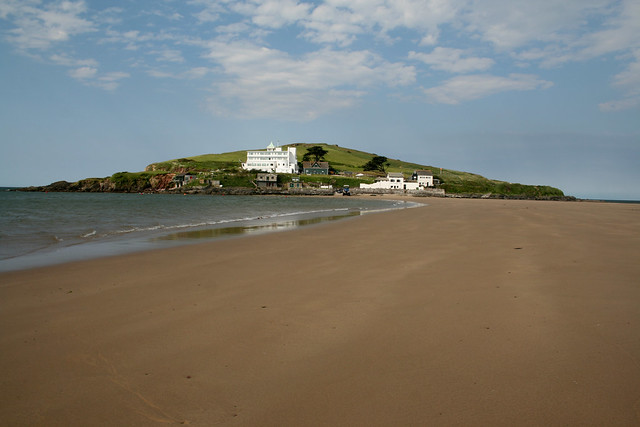 I set out over the beach, expecting firm sand underfoot. As it happened, the sand was a little soft making it a little harder going, although it is only a short walk so not very demanding. On reaching the island I had a good view back to Bigbury and the unusual sea tractor I mentioned earlier. 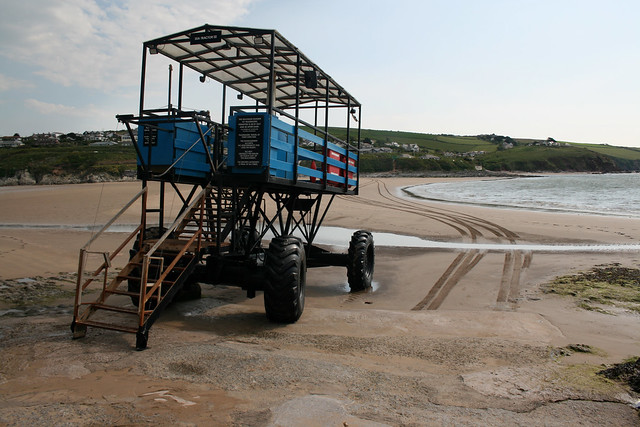 Around ⅔ of the island is accessible to the public. The previous owner welcomed walkers, but when the island changed hands in 2003 the new owners attempted to block access to most of the island and put up signs closing the paths. Thankfully Devon County Council confirmed these paths as rights of way (as now reflected on the map) and they have since opened to the public once more. The road up to the island passes the Pilchard Inn pub on the right and then I took the footpath off to the left, just inland of the hotel car park. This path takes me to the north western most point of the island. 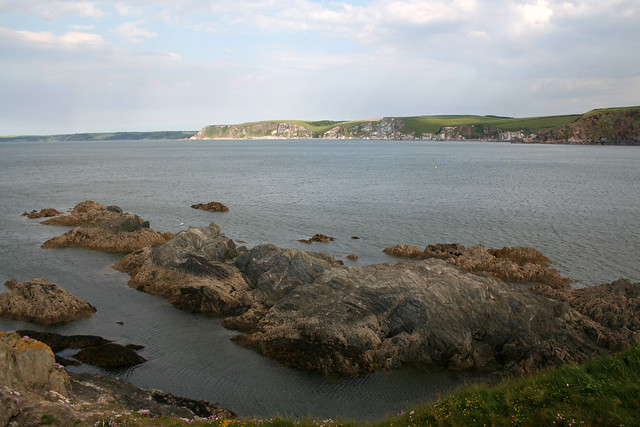 I then followed another footpath along the back of a rocky gully known as Herring Cove, which occupies part of the west coast of the island. 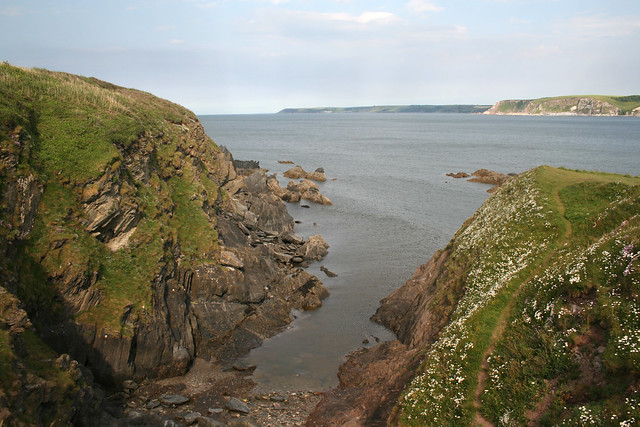 The path is now gaining height and offers views back to Bigbury and to Challaborough around the coast. I followed the path around the western coast of the island which was dotted with sea pink flowers adding a nice touch of colour. 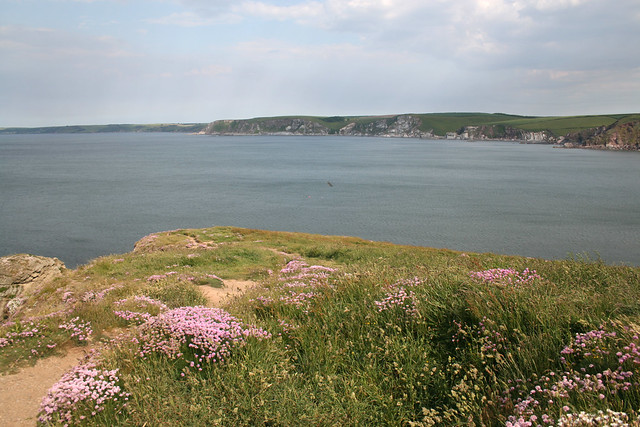 Soon I reach the top of the island where there is the remains of an old chapel. This later became a Huers hut where fisherman would shout out if shoals of pilchards were seen. It is now derelict with no roof, although the walls are standing. 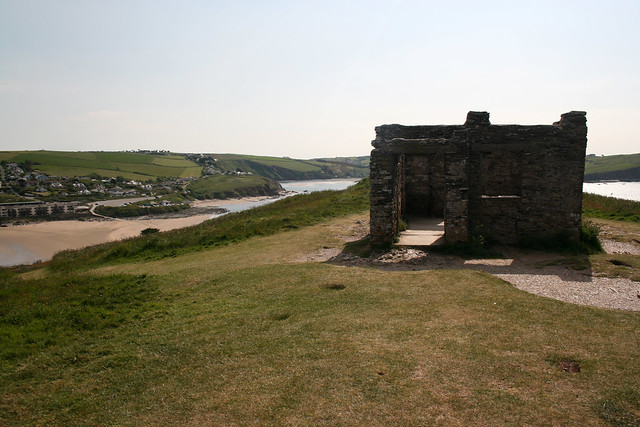 Just past this, there are also foundations of another building but little of this remains. I think this is an old World War II lookout.

I took the path out over the southern most point of the island where it almost splits into two, the second being called, imaginatively enough Little Island. There are numerous little rocky inlets here and a path out to the smaller island. 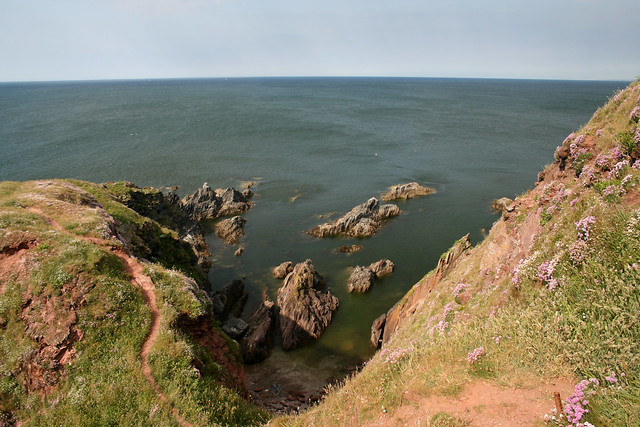 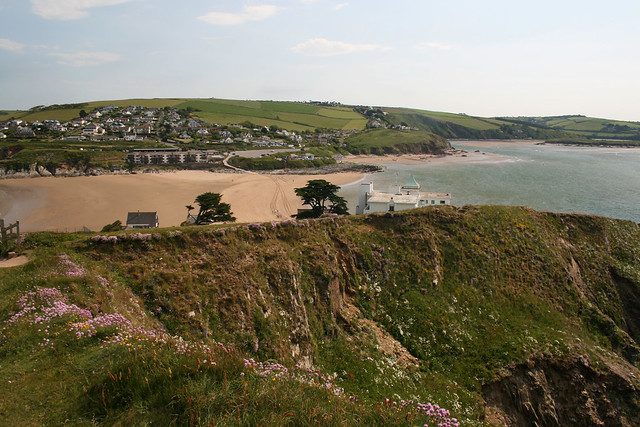 I thought I might have lunch later at the Pilchard Inn, but then I spot a notice by the main entrance. It says “This bar is for use by our hotel guests and local regulars”, with visitors directed to a smaller and less welcoming bar around the corner. The only choice on the menu is baguettes and soup. Not exactly welcoming, so I give it a miss and head back over the sands, taking a last look back at the island. 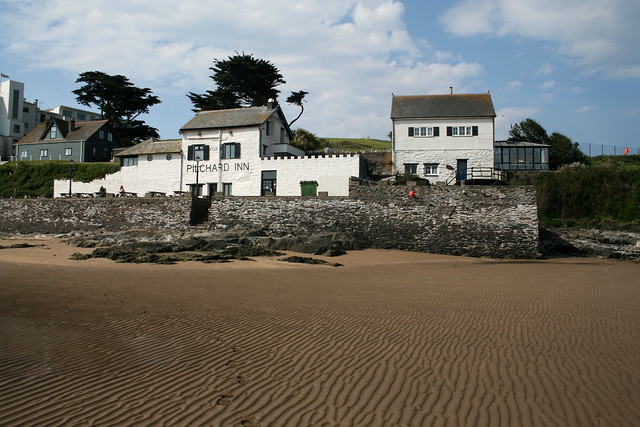 All that remains is to head over the soft sand leading out to the island and back to the main car park at Bigbury. This is a small island, but a very pretty one. It is a bit dominated by the exclusive hotel but despite this there is quite a bit of interest and it is a spectacular location. As usual, I’m glad I made the effort to come over to the island. 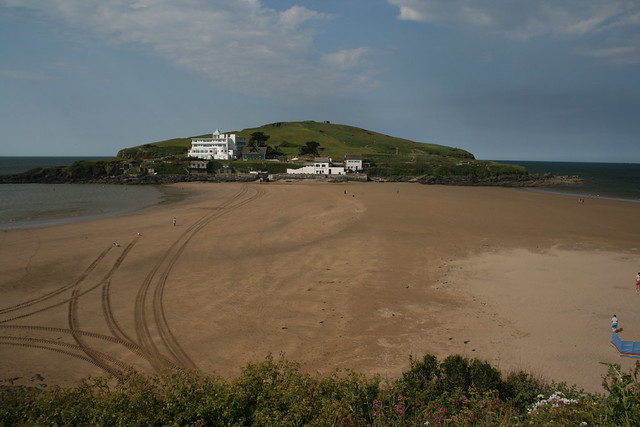 As this is a circular there is no need for public transport, but if the tide is in and you want to get there, or the tide comes in whilst you are on the island, you could take the sea tractor. There is some details here . I have heard conflicting information about the usage of this as to whether it’s for the public or hotel (and possibly pub) users only. The website states “The sea tractor runs for our guests when required. Member of the public can join in the ride and the fare is £2.00 each way”. This suggests that they won’t run it just for the public and so you have to hope that one of the hotel guests (or a pub visitor) wants it and you can then get a ride. I’d therefore suggest trying to only cross between the island at low tide and not rely on the sea tractor running.

Here is the complete set of photos for this walk : Main Link | Details | Slideshow