The last of the inhabited islands I had yet to visit was Bryher and it is also I think the smallest. After the poor weather the previous day, things were much better today and I headed down on the now familiar walk to the quay to see the days trips. Thankfully there was a trip over to Bryher, so I got my ticket and headed to the Co-Op for lunch and a walk around St Mary’s.

Nearing the time of departure, I headed back to the quay at St Mary’s and the boat over to Bryher. It was a short crossing and we were dropped at the Quay on the east side of the island. 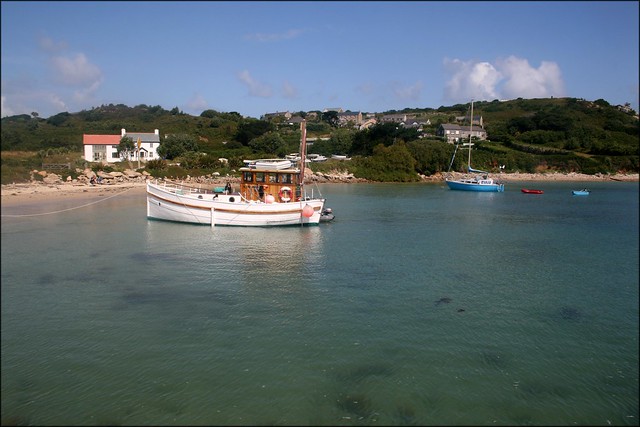 It was a lovely view to arrive to. I decided to head clockwise around the island, as did many others on the boat, so we are all a bit of a procession along the coast path for a while, although as people walk at different speeds, this didn’t last long.

Ahead was Samson Hill, so called because it overlooks the neighbouring island of Samson, although it is high enough that it looks like a separate island initially. 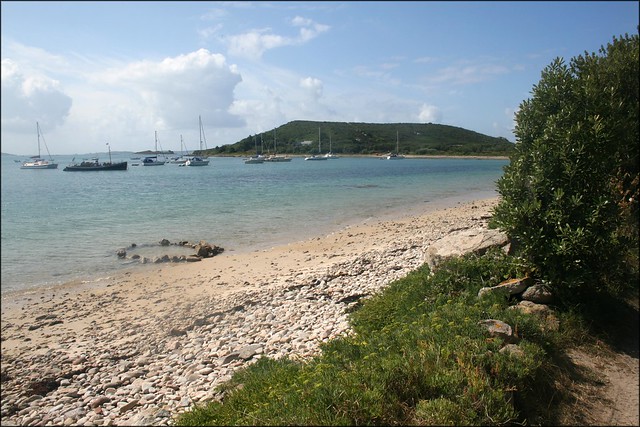 Looking back along Green Bay you can see boats moored in Tresco Sound and the beach of Green Bay behind me. 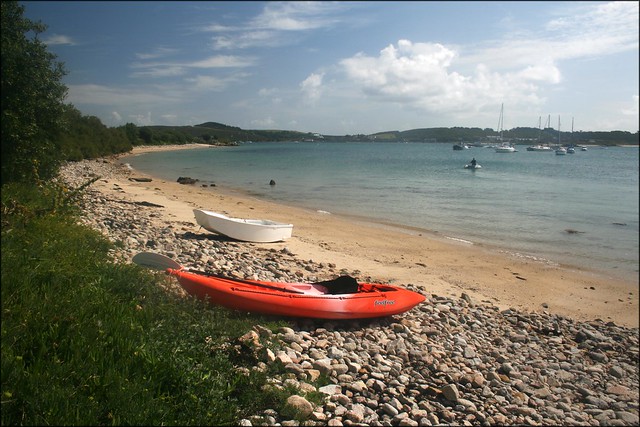 The beach became more shingle ahead as I neared Samson Hill, where there were a number of canoes moored up on the beach. The coast path went along beside Samson Hill at a low level so there was no climbing involved and soon I get a good view of Samson itself. 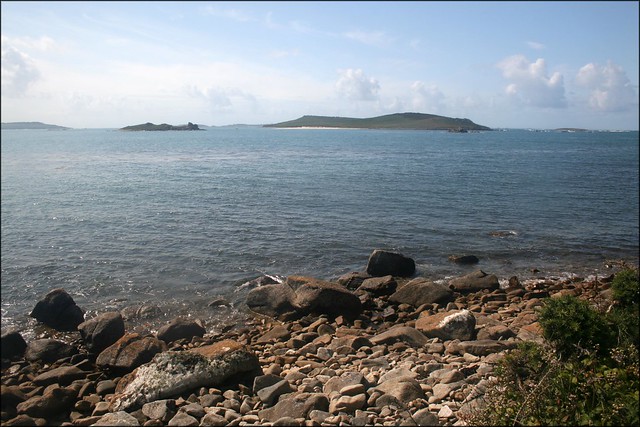 I’d like to visit Samson but sadly I missed a trick. There was a boat trip on the board a couple of times earlier in the week, and I assumed it ran every day. However after the first two days, no more trips were offered apparently because of the weather and low tides. Another time, perhaps.

At the south west of the island are a number of rocks marked as Outer Colvel Rock in one case and then leading out to the Northern or Norrad Rocks, the smallest set of uninhabited islands of Scilly. 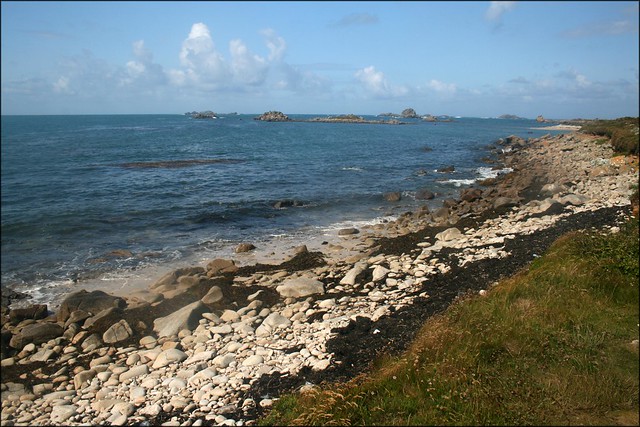 Looking back there was the wonderful beach of Rushy Bay. 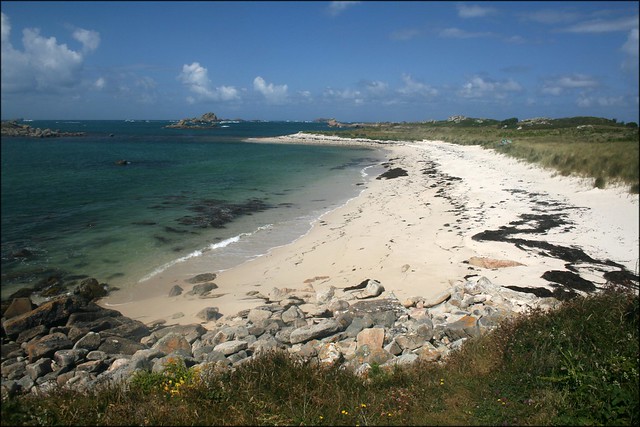 The white sands were very inviting, so I stopped for a while on the beach. After a nice rest I continues on the walk to Heathy Hill (I can see how they named that!). This goes round a rocky beach, Stony Porth, which as the name suggest is quite stony. 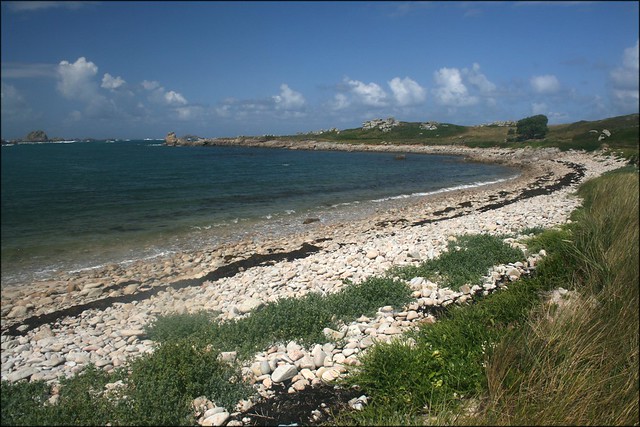 At Heathy Hill I come across what I suspect is the only tree on the island, it being rather wind-blown. 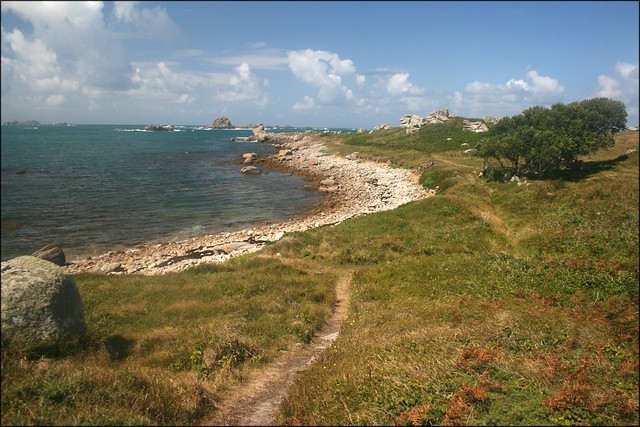 Looking back I can see Samson Hill which rather dominates the south of the island and is a mountain by Scilly standards.

Out to sea I can see Samson again, and White Island alongside it. Heathy Hill turns out to be rocky hill rather than heathy though, since there are numerous rocky outcrops on it. Just out to sea are numerous rocks such as Gulf Rock and Gerwick, but I’m more interested in the name of the headland I am standing on – Droppy Nose Point. Love it! Rounding Heathy Hill I get a view north over the beach of Great Porth to the island of Gweal just off the coast of Bryher. 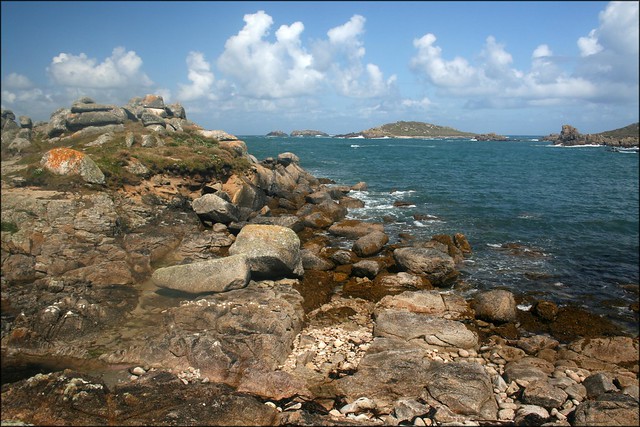 Great Porth is another large sand and stone beach with houses along it’s north edge, one of which is a hotel. 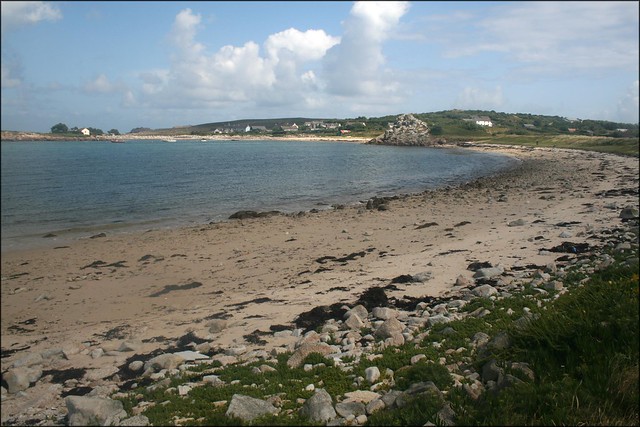 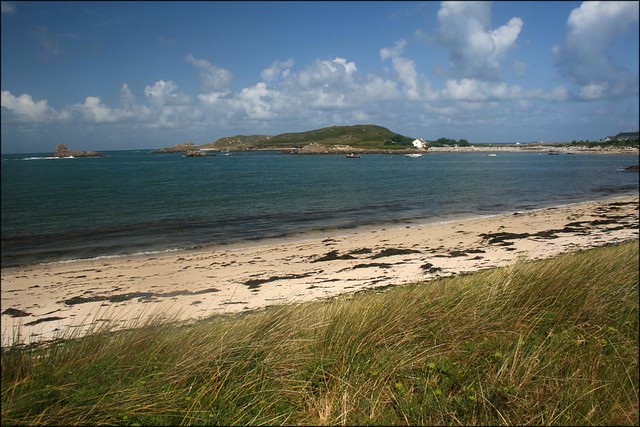 The coast path goes in dunes along the back of the beach and cuts just inland of some houses at the north end of the beach. Beyond the houses is Gweal Hill, another rocky outcrop which is almost but not quite an island.

Beyond the houses I come to the oddly named Stinking Porth, which thankfully doesn’t stink, but I did wonder how it got it’s name. Piles of seaweed washed up and rotting away perhaps? Or dead animals of some kind? In any case, it doesn’t stink anymore and in fact is a lovely beach with the hill of Gweal behind it. 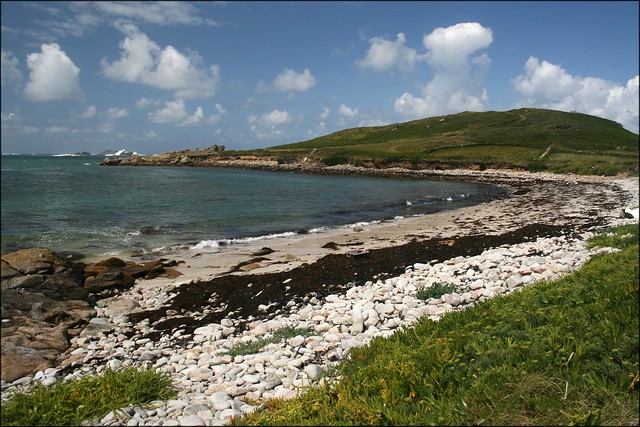 Gweal Hill has a path going around the edge of it, so I include the headland passing the little islands of Crow Island and Merrick Island, and the much larger island of Gweal just off shore. 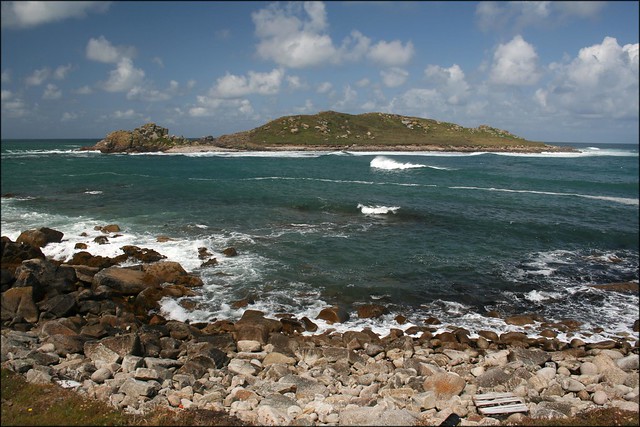 The path ahead goes around a cove so tight that it is almost enclosed, this is Popplestone Neck. Ahead I can see the beautiful rocky beach at Hell Bay. This is one area of the islands where the sea is deep and facing west this part of the island gets the full force of the Atlantic. It’s an impressive sight, which I saw more of later. 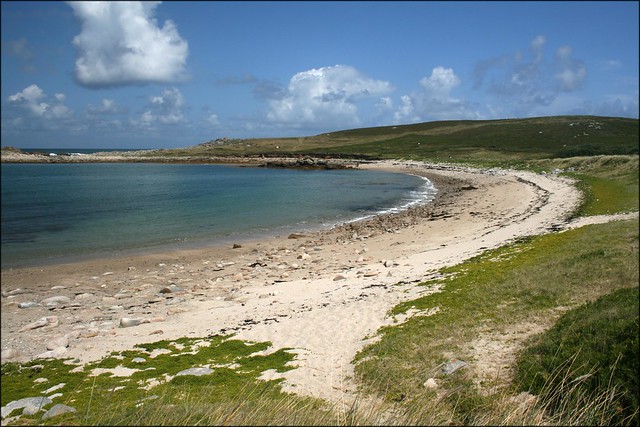 Heading round the corner though you can see how the coast changes with the sea becoming very rough as I get near the northern tip of the island and to Hell Bay itself. 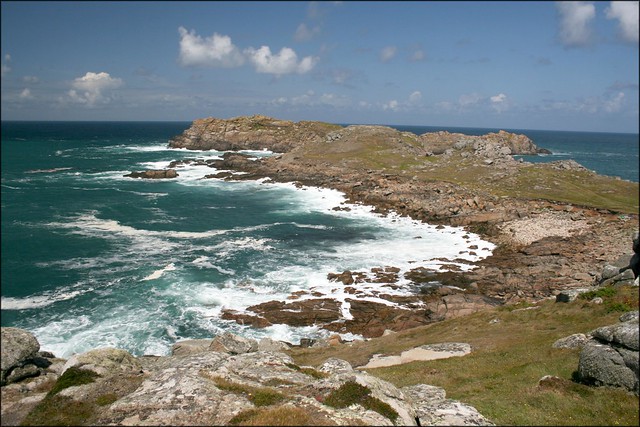 Rounding the coast of Shipmand Head Down there is the northern most point of the island, Shipmand Head. The waves here are impressive, breaking over the rocks and throwing up a huge amount of spray. 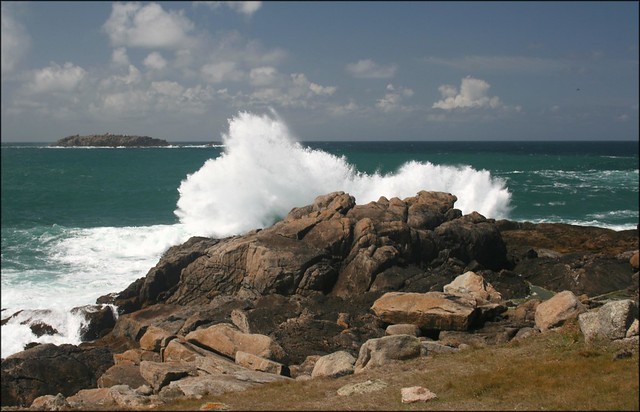 I love watching the sea like this with each wave making a different pattern of spray and the feeling of the salty spray hitting your face. 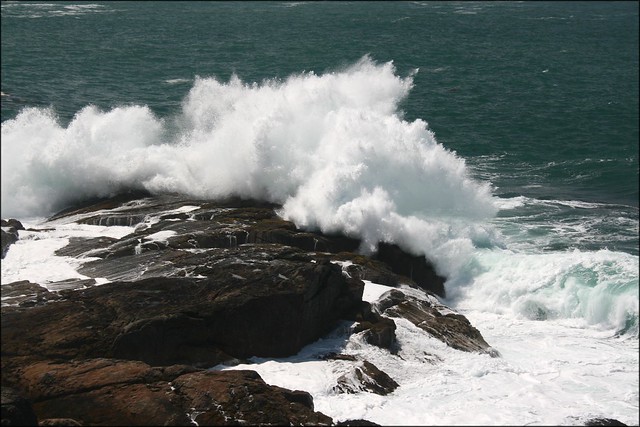 At the very northern tip of the island is Shipman Head, which has more restricted access than Bryher, being closed for some of the year for the bird life. I had hoped to go out to it, as it was open at the time I visisted, but there is a very narrow channel of sea between the rocks which I hadn’t realised. It might be possible to jump over it, but it is a long way down and looks dangerous, so I give it a miss. Still as close as I can get to the end, I can enjoy views over to Tresco and Round Island. 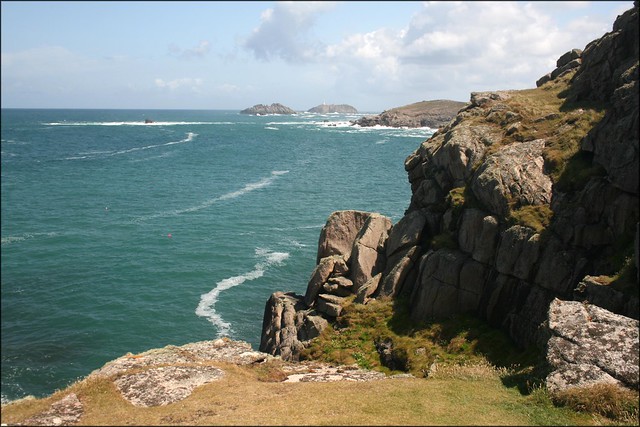 Rounding the corner I’m now looking at the west coast of Tresco and Cromwell’s Castle.

The north coast of Bryher is rocky and rugged and the path quite undulating. The north west coast of Tresco is similar and it looks so close (as indeed it is). 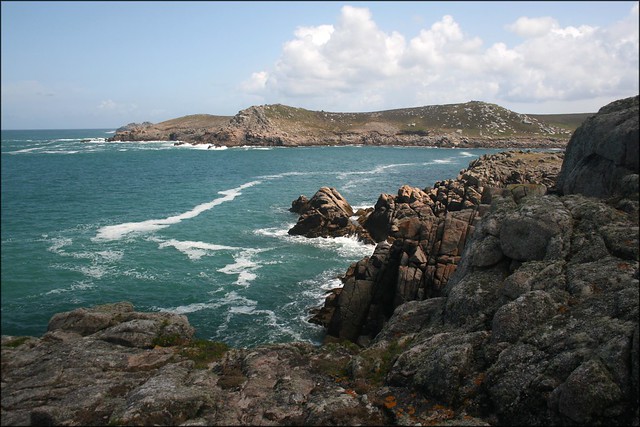 I decided to climb to the top of Shipman Down (and wonder why we put Down on the end of places that are very high, it should really be Up). It gives a good view over the north of the island to Shipman Head. 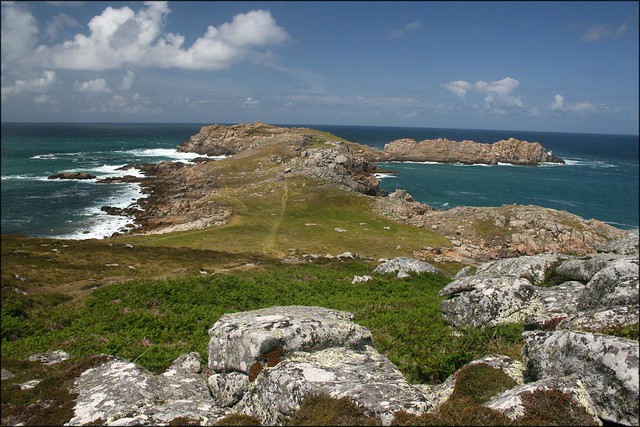 Soon there is a view ahead to the town of Bryher, Tresco Sound and Tresco. It’s a lovely view with the boats moored up in the shallow waters that seperates the islands. 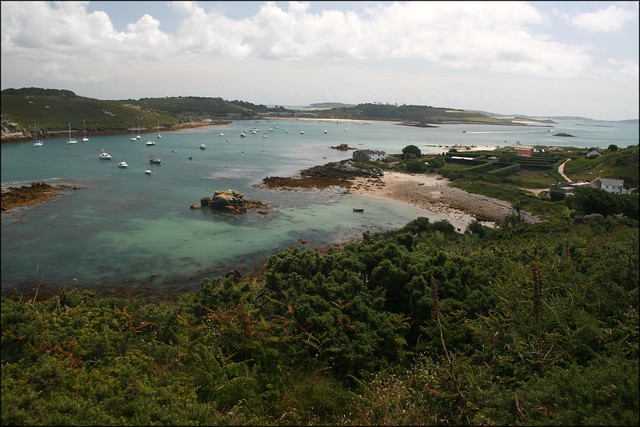 Heading back down to the coast I head down to the beach just behind the quay, as this is the only part of the island that doesn’t have a proper coast path, so as the tide is out I made my way along the beach instead. It is hard going but worth it. 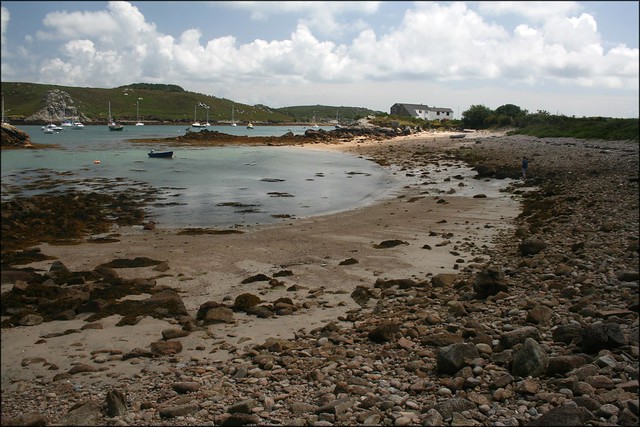 The water is so inviting. Tresco is just over the water and it really does look shallow enough to wade. I remember seeing Nick Crane do it on the TV once though and even on a low tide he had to go out quite deep so it’s not quite as easy as it looks. 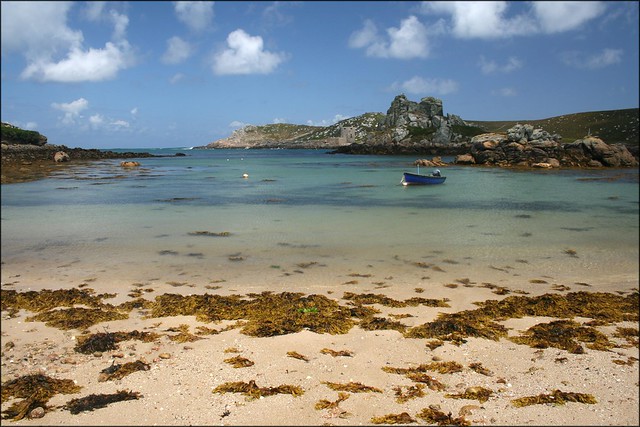 After climbing over rocks I am soon back at the quay, my walk around the island complete. 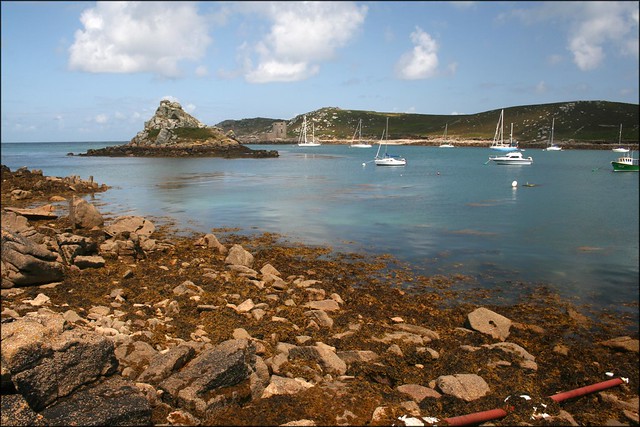 Having walked the coast of the island I headed inland to explore the town. First port of call was the little church just behind the quay and accessed along a sandy path from the beach – there can’t be many churches with a nicer approach. It’s quite pretty and very well kept inside, with flowers on the end of each row of pews. I also pass the shop, which has obviously been recently built, presumably replacing an older building with a neat slate roof and wood panelled walls. Once complete I did what I did on the previous walk, head to the pub, the one on Bryher being the Fraggle Rock. I remember watching that TV show as a child so it brings back some happy memories. I don’t think it was set on Bryher though – for one there isn’t a lighthouse on Bryher.

After a drink I headed to Watch Hill another rocky hill just to the north of the town, that overlooks the town.

Unfortunatly, like my trip to St Agnes, the boat has to leave a little early due to the tides. We are given the choice of returning direct to St Mary’s, or stopping off in Tresco. I choose the latter and it soon becomes apparant why the boat has to leave now. Unlike the other islands, there is only one jetty/quay on Bryher and as the tide is still going out there is already little water left and as more people get on the boat and hence it gets lower in the water, the boatmen has to keep moving back further along the jetty until only the front of the boat is lined up. We all make it on though, for the couple of minute trip over to Tresco. I’m surprised to see most people have opted to stay on to St Mary’s.

I have nice walk around Tresco again, this time taking in some of the town and the wonderful beaches. I only have a couple of hours on the island and, as last time, we are dropped off at New Grimsby, but picked up from Carn Near on the south coast of the island, so I walk some of the coast of Tresco again too.

I really enjoyed this trip and found Bryher was an island of large contrast, perhaps more so than the other islands. Stunning beaches on the south and west coasts, and the rocky, rugged north coast at Hell Bay, that really takes a pounding from the waves. It is a glorious little island – I highly recommend a visit, especially if the weather is good. As it happens, I enjoyed it so much I came back again a couple of months later, this time as a day trip from the mainland.

Here is details of the transport to Bryher:-

From St Mary’s the St Mary’s Boatmen Association run regular trip boats over to Bryher. These are normally daily.

From St Agnes the days trips are generally posted to Twitter

Here is the complete set of photographs from this walk, and a subsequent trip I made in September 2011 : Main Link | Details | Slideshow