First off, a confession. This isn’t actually a walk (hence why I haven’t numbered this post), but there is a good reason for that, which is that the Western Rocks are not accessible to the public. They are owned by the Duchy of Cornwall (Prince Charles) and leased to the Isles of Scilly Wildlife Trust, who don’t permit public access. This means that rather than a walk this visit involves sitting on a boat and going Ooh and Ahh at appropriate moments.

The islands which are open to the public are marked on the Ordnance Survey Explorer (101) map of the islands using symbols I’ve not seen anywhere else and categorising the islands into those open all year round, those open outside the bird breeding season and those not open at all. The Western Rocks fall into the latter category which is unfortunate for us, but fortunate for the birds and seals.

On my walk around St Mary’s I had walked round most of the island in time to return to the capital, Hugh Town around 1:45pm. I knew the rest of the walk would probably take me another hour, so I decided to do that later and instead, to make the most of my time on the islands, take a boat trip for the afternoon, as several leave at 2pm.

It’s worth noting that there aren’t any ferries as such between the islands. Instead, there are typically boat trips run from each of the main islands. From St Mary’s, where I was staying, the St Mary’s Boatmen Association is a co-operative of local boat owners, who typically try to run at least one trip to all the inhabited islands during the day, plus one or two other trips around uninhabited islands or to the Bishop Rock Lighthouse. The profits are shared amongst the boat owners, to ensure the less profitable routes balance out the more profitable ones. It seems to work quite well, and the days trips are marked up on a chalk board near the Isles of Scilly Steamship office in the town centre, and on another board at the quay. There are two fares, one for a direct return and another for the longer trips, which typically land on one of the islands afterwards. 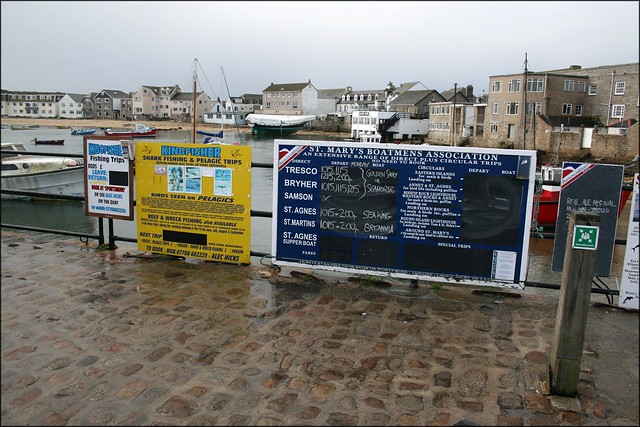 This does mean you can’t guarantee the trip you want to run will run each day (there is no fixed timetable), but it does mean there is usually a good choice of trips. Tickets can be bought at the kiosk on the quay. In general the first trips out leave somewhere between 10 and 10:30am and returns are usually around 3:45pm or 4:45pm, but sometimes with some evening options. These days they have gone hi-tech too, as the days trips are now normally posted on Facebook too.

The trips are also usually announced on the islands own radio station, Radio Scilly, which claims to be the world’s smallest radio station.

I decided to take a trip to the Western Rocks. This leads me on to a question, when is something and island and when a rock? Well according to the guidebook I had, it’s an island if it’s covered in vegetation all year round, otherwise it is a rock. I assume that must only apply in the UK as I’m sure there are places with large islands but no vegetation, because of the climate (like the arctic, for instance). Anyway, the Western Rocks are a series of small islands and rocks off the west coast of St Agnes. The largest is Annet, which is also closest to St Agnes, whilst the other are smaller.

It was a beautiful warm and calm day, and we soon set off, with only around 20 people aboard to head past St Agnes and out to the Western Rocks. Annet is the second largest of the uninhabited island, but has been inhabited in the past, as there is the remains of a field system and a hut circle of stones.

Cormorants can be seen on all the rocks around the island now who no doubt enjoy the lack of disturbance on the island. The sea around here is very rocky and you can appreciate the skill of the boatmen, who have to negotiate all these rocks safely. Our skipper stops the boat at a number of places so we can stop and enjoy watching the wildlife.

As we head further out to the smaller islands we start to see the seals. A few in the sea, but soon pulled up on all the rocks. It is lovely to see them just relaxing in the sunshine, unconcerned by our boat. It was an unexpected and lovely treat to see them. 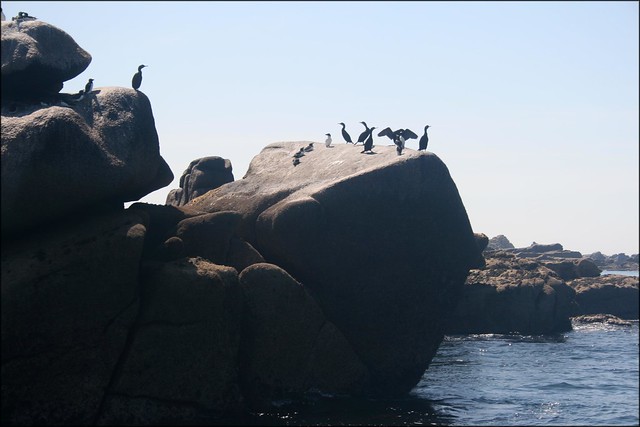 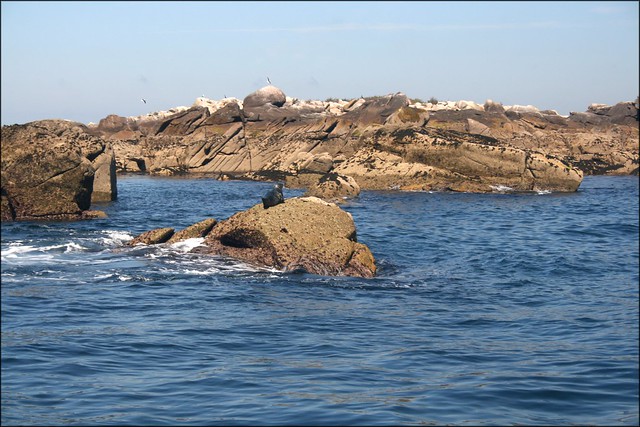 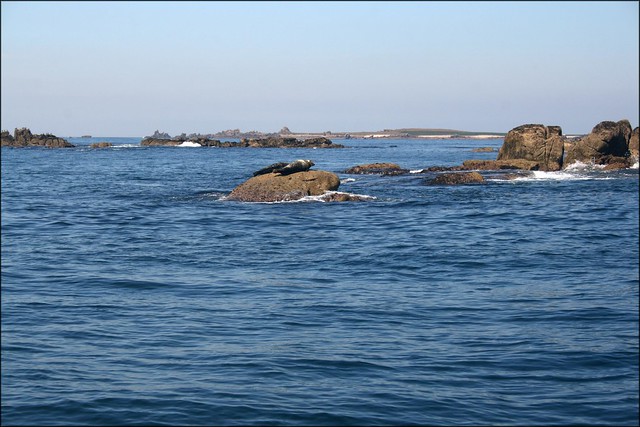 The boat continues further out and soon we can see something else I wanted to see, the Bishop Rocks Lighthouse. This truly is the most South Westerly point of England. Beyond here, the next land is America. If you’ve ever heard the shipping forecast you’ve probably heard mention of this place. This trip didn’t go right out to see the Lighthouse it (although the boatmen do run trips there too, in the right weather). 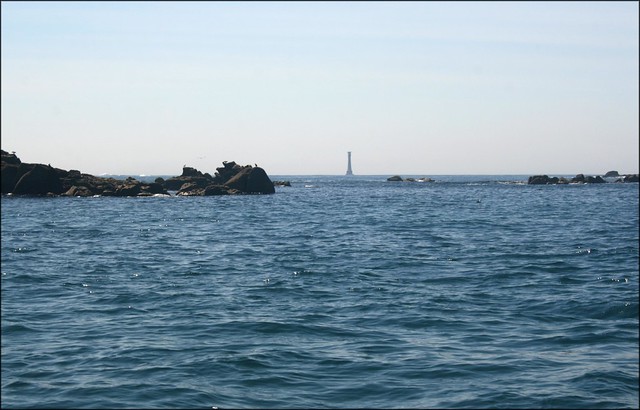 On one of the islands, Rosevear, you can see the remains of the gable end of a cottage. This is part of the remains of a small temporary settlement on the island that housed the workers building the Bishop Rock Lighthouse. Since that was completed the houses were abandoned and little is left after many decades of winter storms in the exposed location.

It was a lovely trip and a good experience to see some of the varied wildlife calls Scilly home and can enjoy life relatively undisturbed by humans.

After the trip is over we have the option of going straight back to St Mary’s or stopping off for around an hour on St Agnes. I opt for the latter since it gives me a sneak preview of the island for when I walked around it later in the week. I resisted the temptation to visit the most South Westerly pub in England (The Turks Head) and instead headed for the sandy beach which links St Agnes with the neighbouring island of Gugh when the tide is out. The sea is crystal clear and the water quite warm, so it was a nice relaxing visit.

Soon it is back to St Mary’s, mission accomplished and another set of islands visited (or at least as much as is possible to visit).

This trip around the Western Rocks is a trip operated by the St Mary’s Boatmen Association. It does not run daily but typically a few times a week during the summer season. Similar trips are operated from the other islands.